Global vehicle sales up by 4.7% in Q1-17 with Renault-Nissan hitting top 3

Global passenger cars and LCV sales recorded an increase of almost 5% during the first quarter of this year, according to JATO Dynamics figures. Vehicle sales totaled 21.24 million units through March 2017, or 962,000 more than the total seen in Q1-16, in 52 markets covered by JATO. This total excludes other key markets like Iran, the Middle East, Magreb, Pakistan, Philippines and some South American countries. However, this is an accurate picture of how global markets are performing. 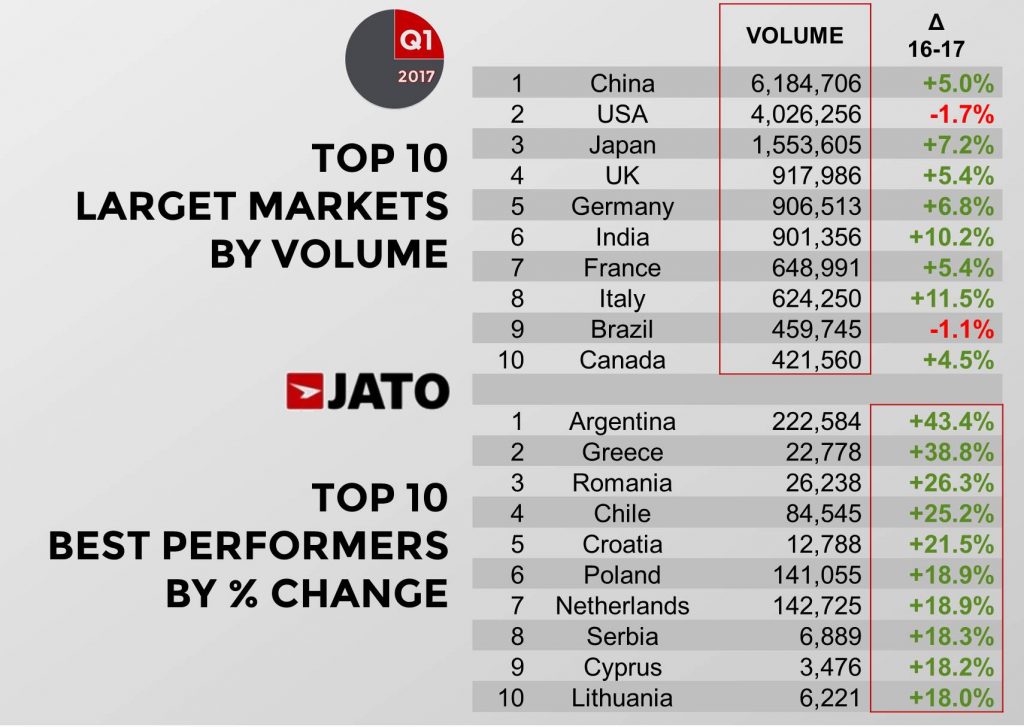 China keeps the lead with more than 6 million units, but shows a moderate growth of “only” 5%. It was followed by an stagnated US market, which was even outsold by EU-29 with 4.76 million units against 4.03 million units in USA. Along with Russia, Turkey, Israel and South Africa, the EMEA region was one of the drivers of growth during the quarter. It was only outperformed by South America and India, where growth was possible due to different reasons. 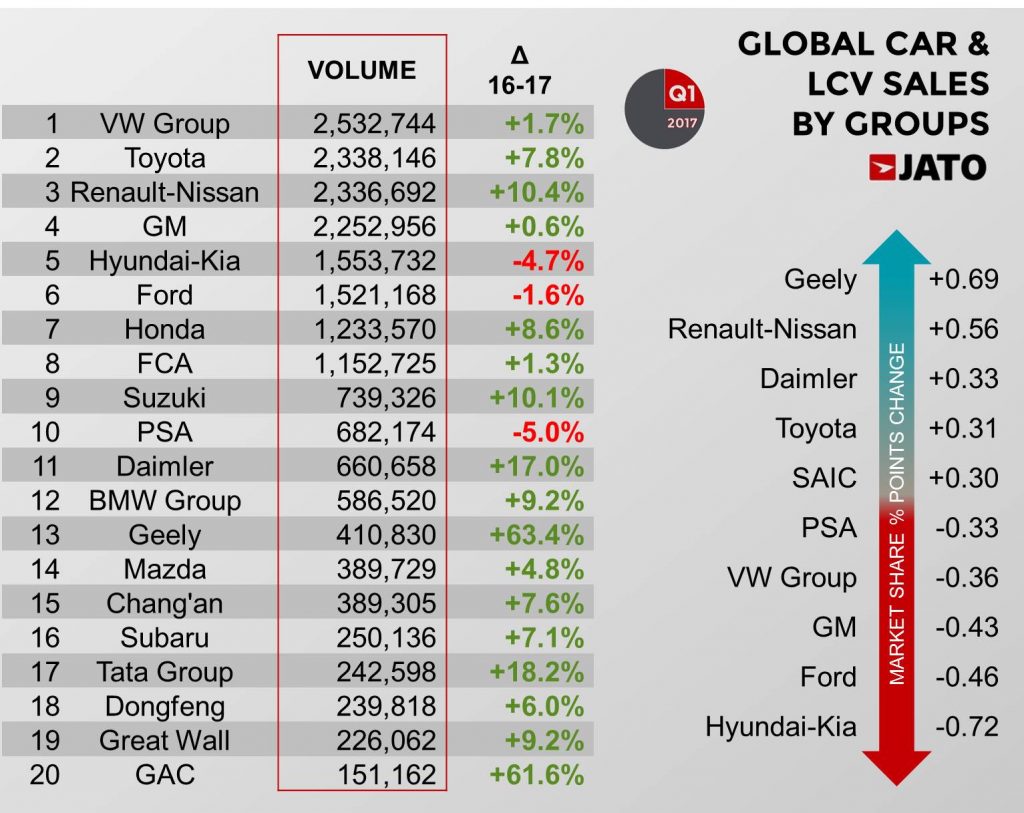 Volkswagen Group keeps its first position in the ranking by car groups following the strong position in China, where it sold 40% of its vehicles. However, the German company posted a timid growth of 1.7% as the volume fell in China, and remained stable in Germany. VW is still strongly dependent on the B and C segments, which counted for 55% of its global sales. 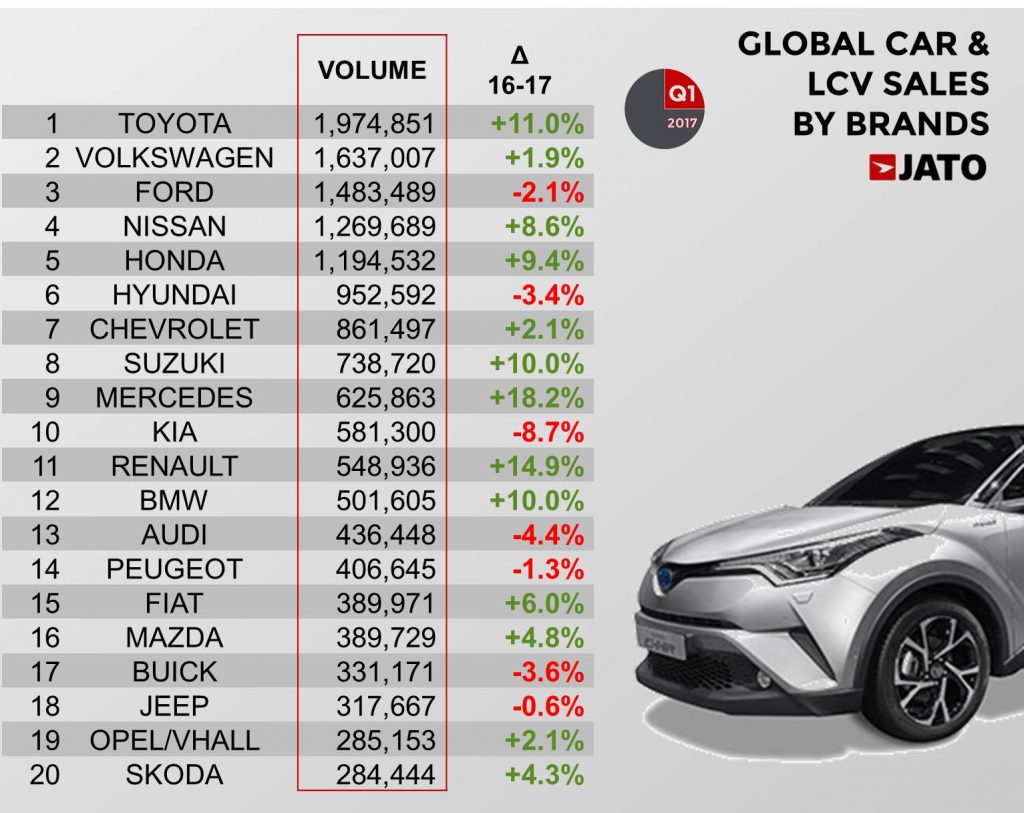 Toyota came second with 2.34 million units, excluding the volume coming from key markets for the Japanese car maker like the Middle East and Africa. Toyota grew faster than VW Group as its local sales in Japan soared and it has more growth potential in markets like China. In the Asia-Pacific countries, where Toyota has a dominant position, contributed also to the growth. 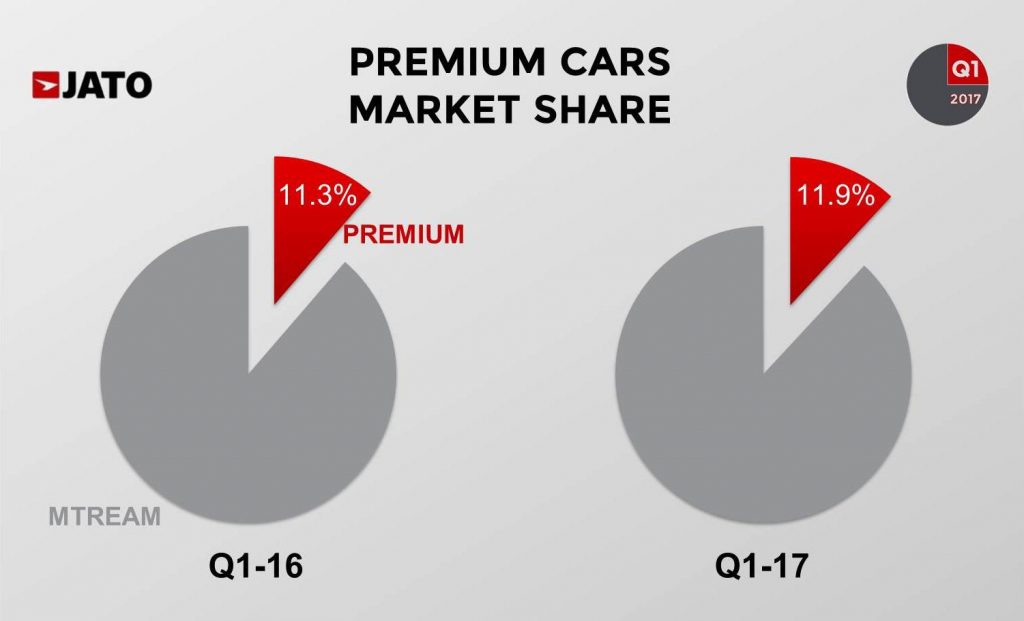 The protagonist of the quarter was Renault-Nissan, which was only 1,500 units behind Toyota and posted an brilliant 10.4% increase. The total includes Mitsubishi sales, and excludes the important position Renault has in Iran and the Magreb markets. While China outsold Japan as its second largest market following a 33% increase, mostly boosted by Nissan brand, the alliance keeps benefitting from its leading position in the global SUV segment. 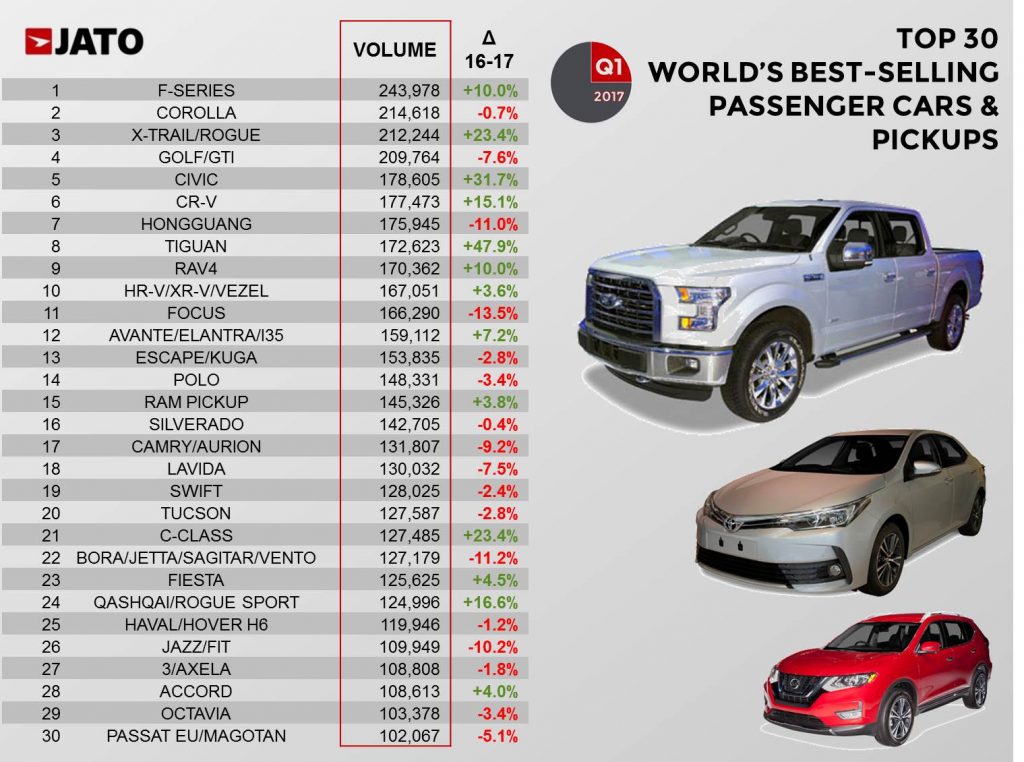 In fact the SUVs were once again the segment to drive te growth. In Q1-17 the world buyed almost 6.5 million SUVs, or 14.8% more than the total seen in the same period of last year. Even if this increase was lower than the 23% growth posted in Q1-16 vs Q1-15, it is definitely better than the 0% variation posted by the compact cars, and the 4% increase recorded by the subcompact cars. All kind of SUVs, from the small to big ones posted double-digit growth during the quarter.

The model ranking shows interesting changes. First of all, the Nissan X-Trail/Rogue outsold the Honda CR-V and became the world’s best-selling SUV. It got very close to the second position Toyota Corolla and is likely to finish second by the end of this year. It is the first time that a SUV hits the global top 3. At the same time, Volkswagen succeeds with the Tiguan, posting the highest percentage growth in the top 30. The Ford Focus loses ground and gets out of the top 10, as its current generation is already aged. The RAM Pickup outsold the Chevrolet Silverado. And finally the Mercedes C-Class was the best-selling premium car, quite agead of the BMW 3-Series with 100,300 units. 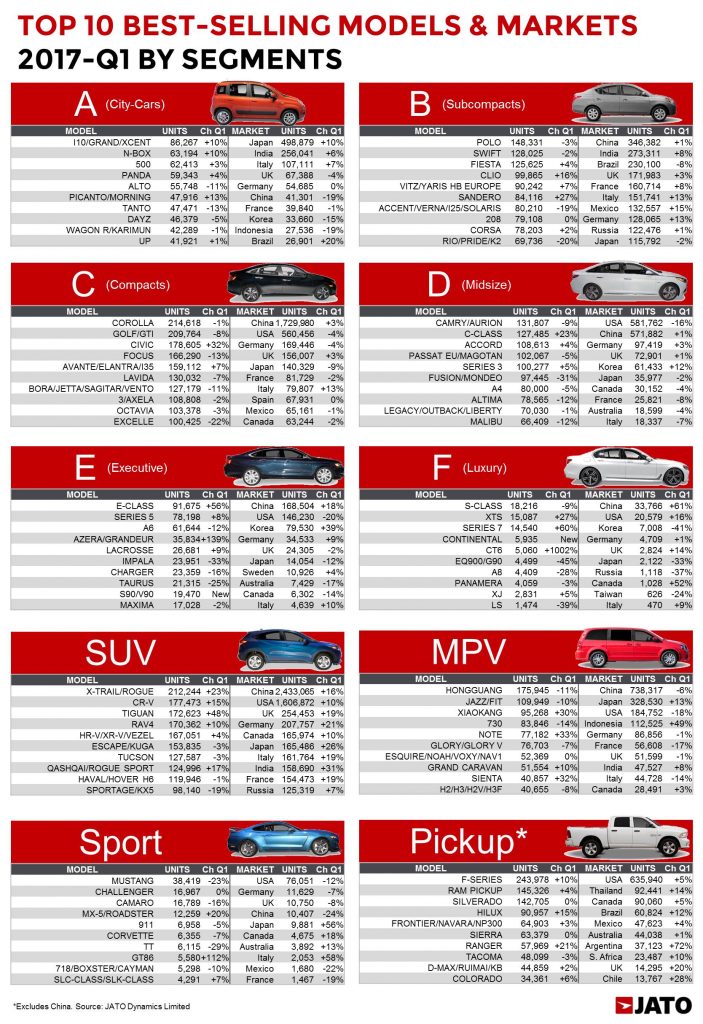