The brands with the highest WLTP homologation rates have posted the lowest registration declines in September. This is the first, and most important, conclusion from an exclusive study made by JATO that linked the homologation status by brands and their registration performance, right after the new emission test became mandatory on September 1st  2018. Even though more than half of the versions available in Europe are already WLTP-tested, there is still a lot of work to do.

The study analyses the total number of versions that have already been homologated under the new WLTP regulation. The findings correspond to 61 brands and 5,044 versions in 22 European markets. The data was then matched to the registration results in September. 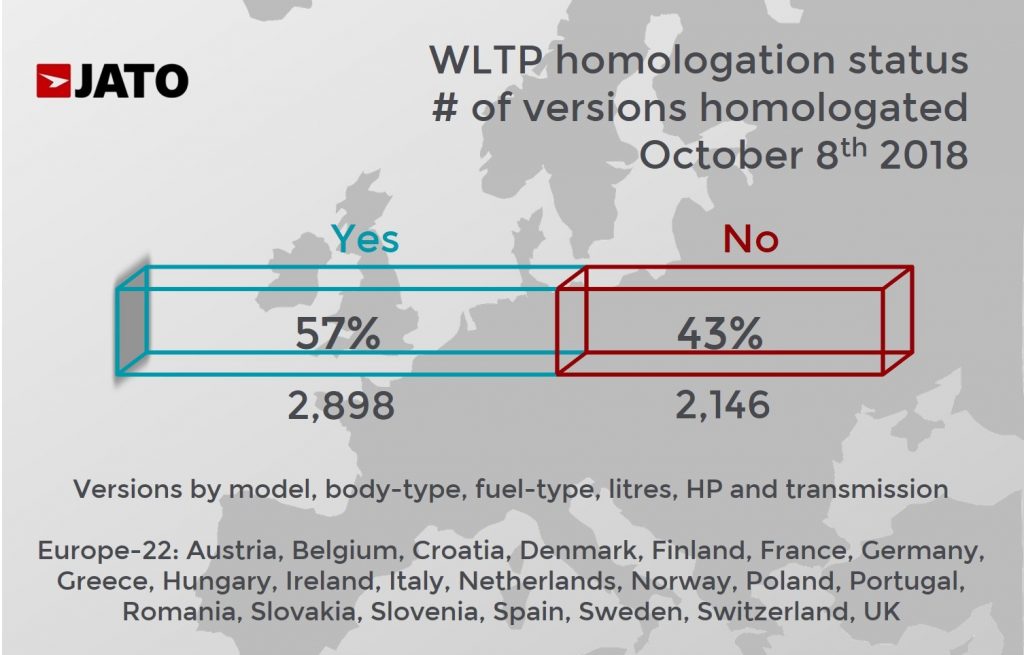 So far, around 57% of the versions are already meeting the new test conditions. Most of the progress has been made by the big premium brands, whose compliance percentage has jumped to 63%, while the luxury/supercar brands registered the lowest percentage at 8%. However, the total homologation (100%) is unlikely due to the fact that some versions may be dropped deliberately.

Among the premium/luxury brands in Europe, those with annual sales volumes between 100k and 200k units had the highest WLTP homologation rate (74%), followed by those with annual volumes between 50k and 100k (65%). Of the mainstream brands, those selling between 100k and 300k units per year showed the best result at 68% WLTP-tested derivatives, in contrast to the small ones (5k-10k) at 34%, and those selling more than 1 million units at 51%. 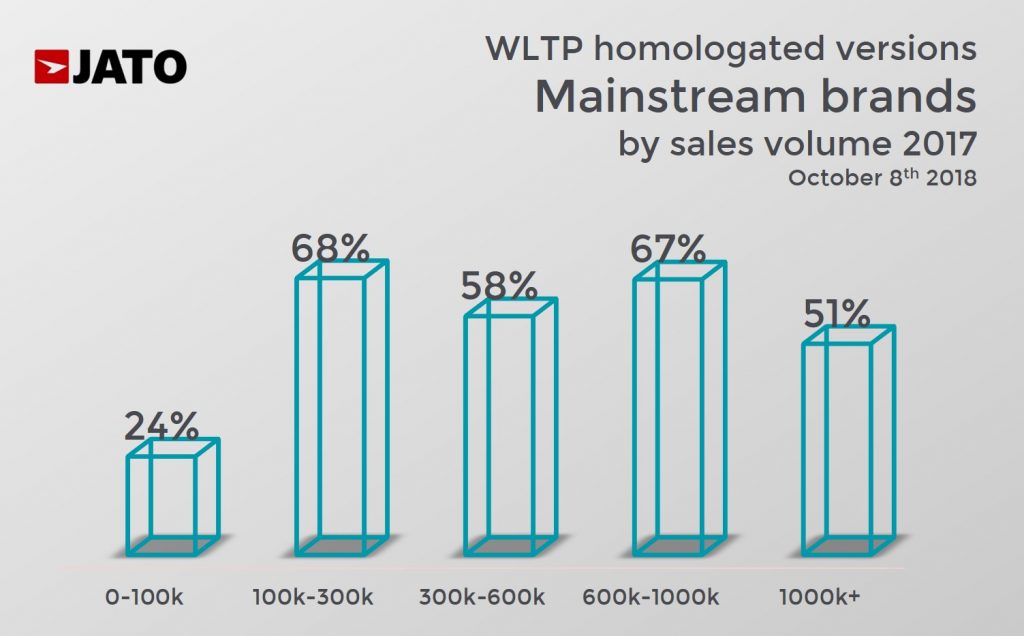 The most important finding was the correlation between the availability of WLTP-homologated derivatives and the registration variations in September. With only two exceptions, the top 10 brands with the highest WLTP homologation percentage recorded below average monthly drops. There was even one brand among them that was able to increase its registrations. On the contrary, the bottom 10 brands with the lowest WLTP homologation rate saw above average volume declines, with the exception of two, which registered a lower below average drop and an increase. 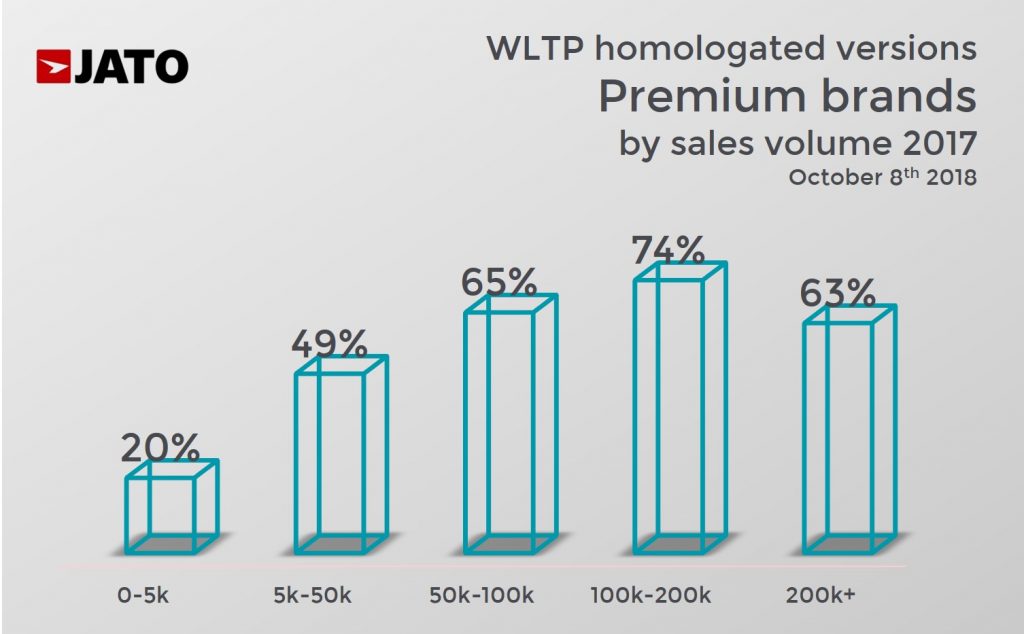 Another interesting finding is that most of the brands with the highest number of versions recorded above average WLTP homologation rates (57%). There are exceptions – and big ones – which have contributed to offset the good performance of other key brands. 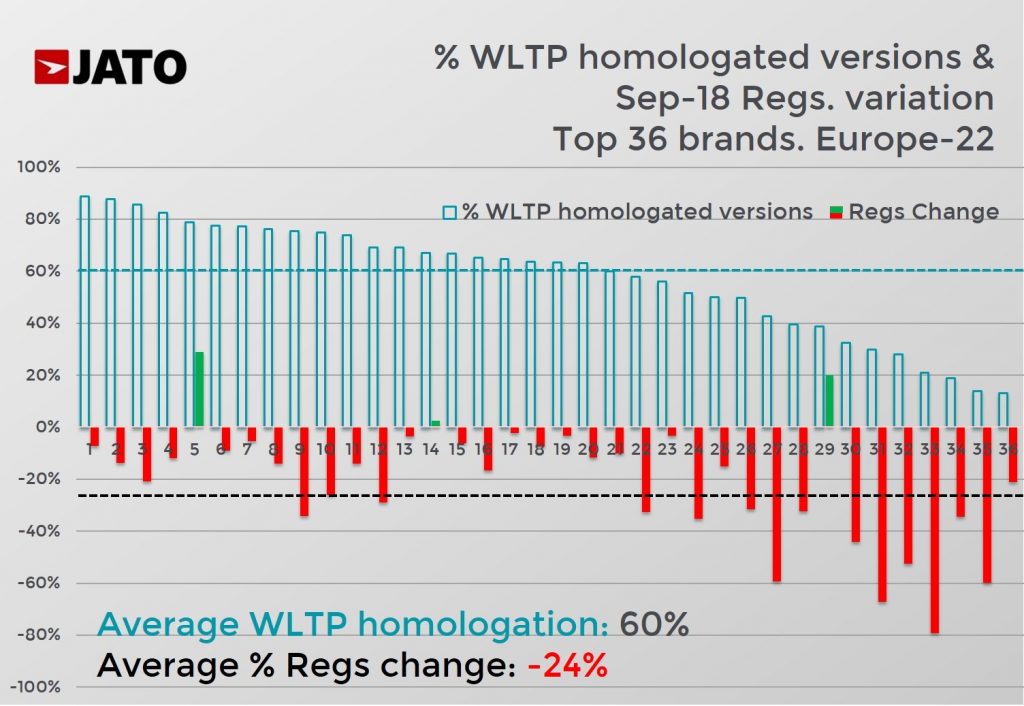 These figures are changing every day. We predict that things should normalise in the coming months. JATO has launched the WLTP homologation status weekly bulletin in JATO News in order to inform which models and versions are being homologated. For more information on WLTP or to subscribe to our JATO News service, please contact wltp@jato.com