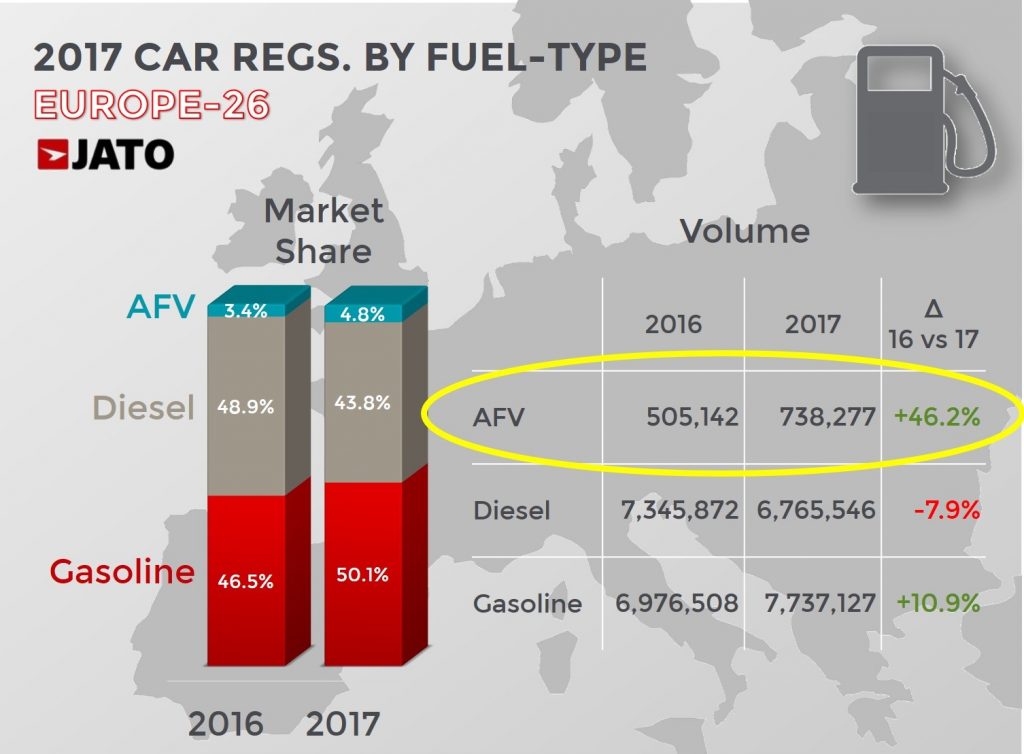 2017 was another year of strong growth for registrations of Alternative-Fuelled-Vehicles in Europe. Figures from 22 markets indicate that increasing numbers of European drivers are leaving their fears behind and opting for the cleanest cars available. Demand peaked last year with 738,000 new vehicles registered, a stark increase from the 2,200 that were registered in 2003. This huge rise is due to more awareness, better technology and increasing incentives for drivers who switch their cars. 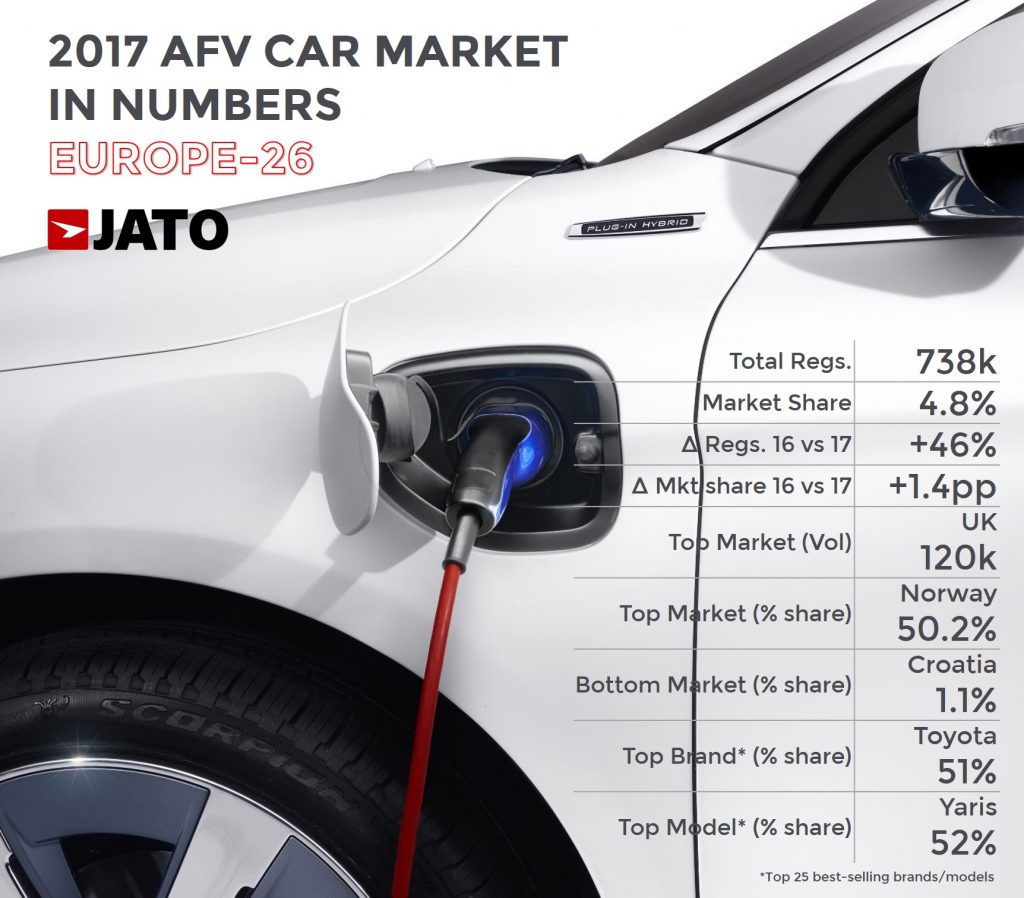 In fact, it was a record year for AFVs in both volume and market share. Europe has never seen figures like this before, which is remarkable given that the industry is currently facing so many challenges. The European car industry has been dealing with ongoing management scandals and is getting ready to face tougher emission regulations and targets, as well as new mobility solutions. 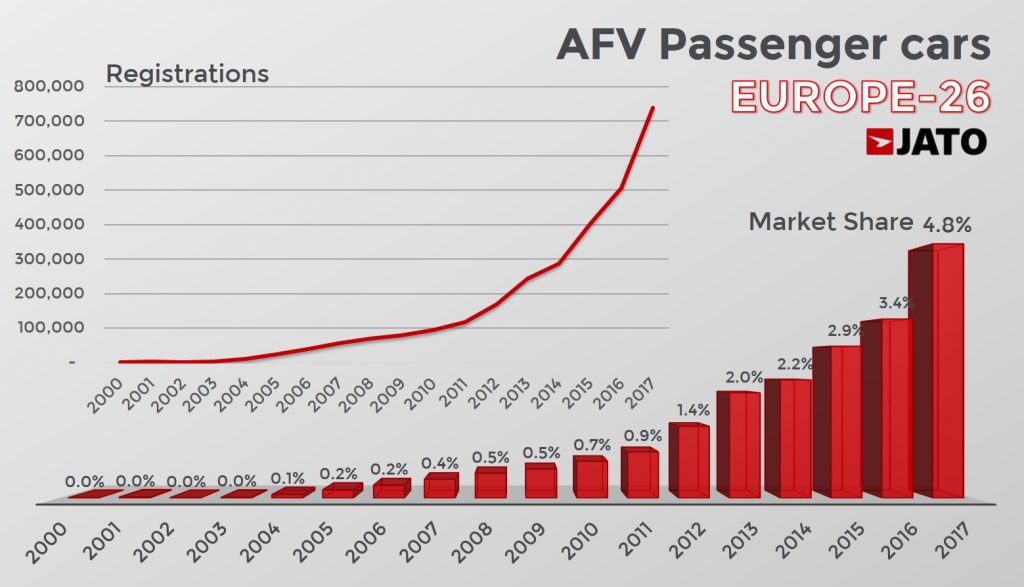 The diesel crisis, which started in 2015 and was heightened in 2017, has led to a sharp decline in the diesel market and an increase in the gasoline and AFV markets. The shift was evident with diesel car registrations falling by 7.9%, while gasoline and AFV vehicles posted an increase of 10.9% and 46.2%, respectively. In the case of the AFV, most of the growth was driven by hybrid cars (HEV), which were up by 52.2% in Europe-22. This powertrain type accounted for almost 61% of total AFV registrations last year. Plug-in hybrids (PHEV) came second with a 20% share and a volume increase of 30.8%, followed by pure electrics (BEV), which represented 18% of AFV’s total and saw registrations up by 46.4%. 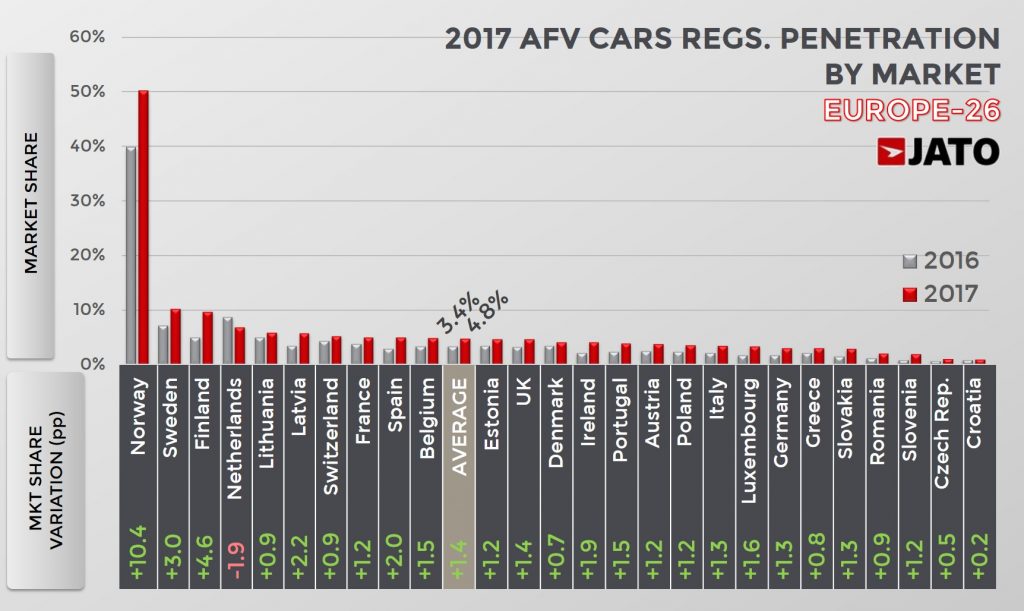 These figures show strong increases and confirm the positive trend towards AFVs over the last few years. However, considering the circumstances, this growth could have been even higher. The diesel crisis is a great opportunity for hybrid and electric car makers to attract more customers. Now, they don’t only compete with cars that pollute the air, but also against cars that are demonised by many governments in Europe. The diesel crisis has led to a total lack of confidence from consumers in the fuel type. Within this context, a clean and positively rated electric or hybrid car should be the attractive choice, but they are still a rare thing to see in the streets. Why? 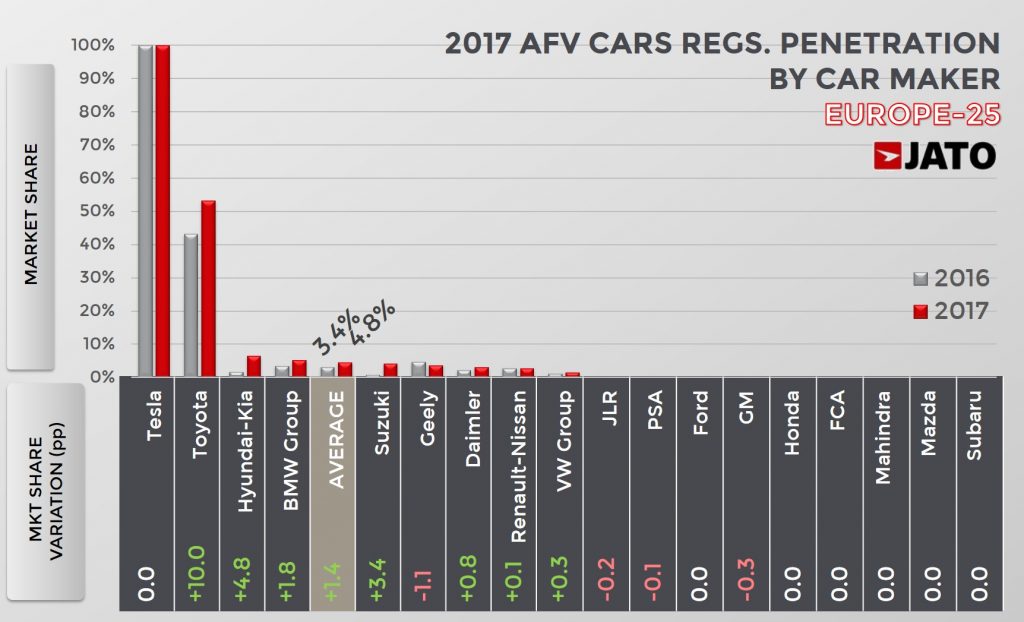 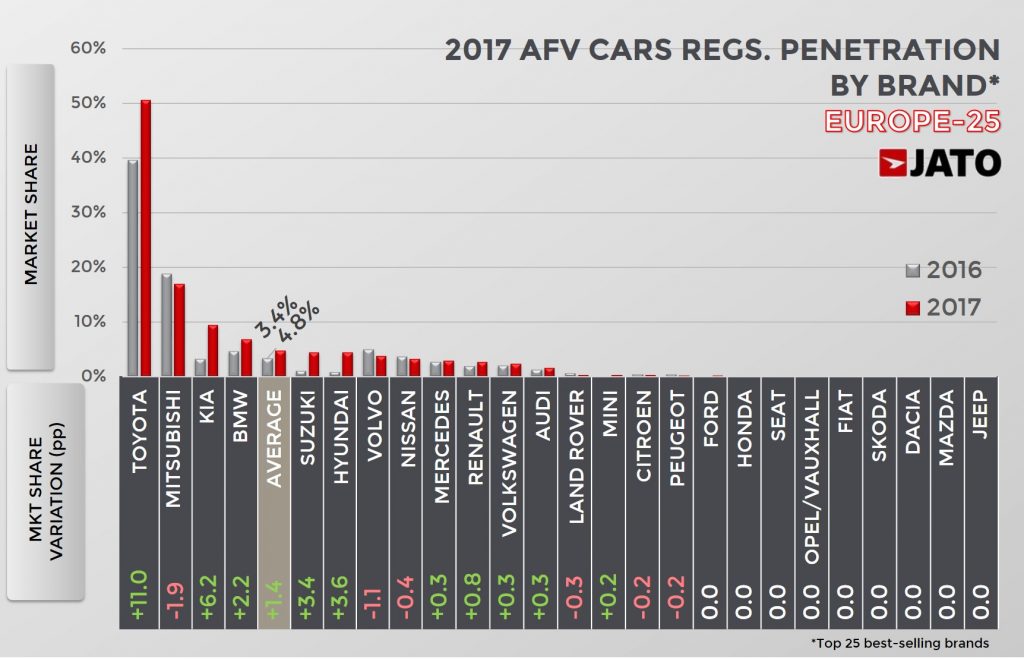 Interestingly, it seems that consumers are moving faster than car makers. Despite battery concerns and infrastructure issues, European drivers are better informed about the benefits of AFVs, notably the cost-effective impact on their wallets and on the environment. According to a recent study conducted by McKinsey & Company, 45% of car buyers in Germany considered buying an electric vehicle but only 4% did so – proving that the interest exists, but the industry is not responding accordingly. 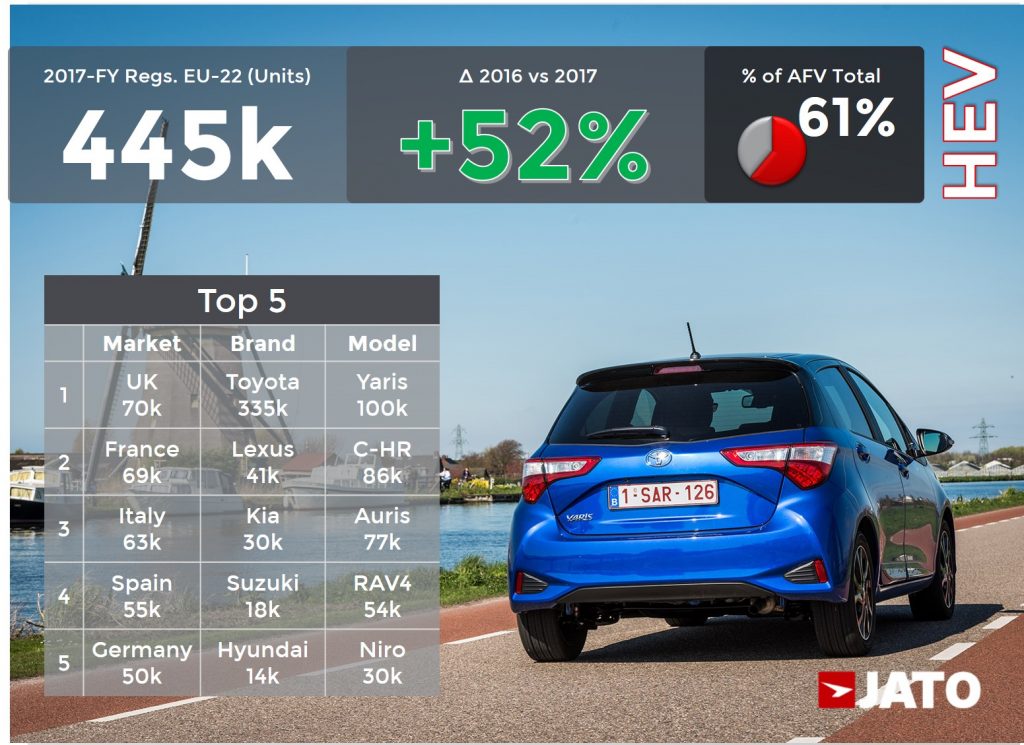 Today, there is a choice of only 24 EV models in the passenger car market. Most of the current EV models on offer are concentrated in the slowest selling segments, city-car (8 models), MPVs (4 models) and Vans (4 models). Despite the industry currently showing a clear demand for SUVs, a European consumer looking to drive an electric SUV has a choice of only the Citroen E-Mehari or the Tesla Model X. 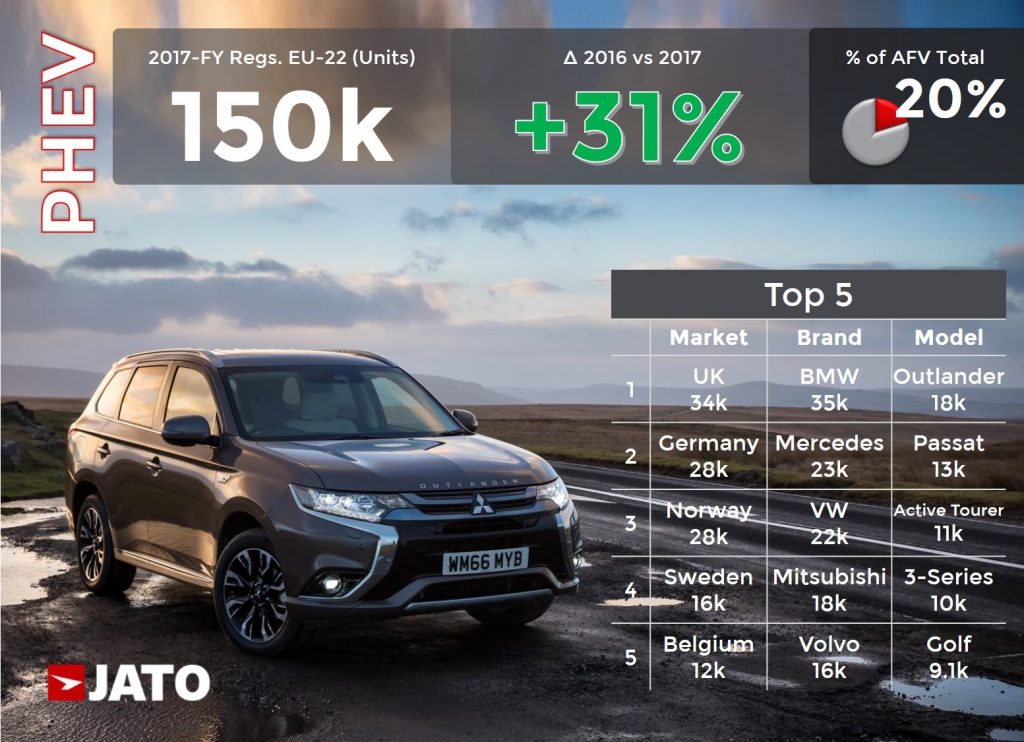 The situation for hybrids is a bit better, but the 39 models available still represent a very low number. In 2017 there were nine different hybrid SUVs, which accounted for 44% of total HEV registrations. Something similar happened in the PHEV market, where 11 of the 31 models available were SUVs, and accounted for 41% of total registrations. These results explain why the growth has been limited: the AFV world is not yet aligned to the consumer needs. 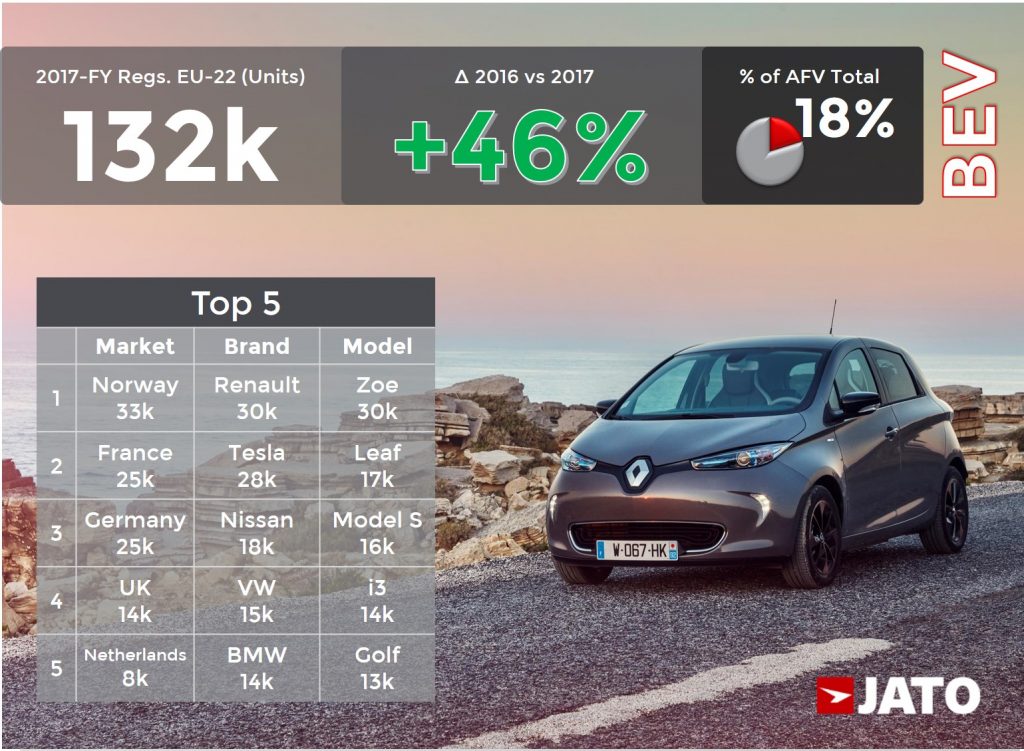 The fact is that just because a car is electric doesn’t mean it is immediately attractive to consumers. That’s the first lesson that car makers should learn, especially when it is evident that they focus most of their AFV resources on launching traditional cars (from A to F segment). This is an even more significant issue when considering the aesthetics of vehicles. When designing an electric car, many manufacturers try to give it a different look from the traditional combustion engine cars, but more often than not zero-emission cars can be a less attractive prospect for consumers. And that’s the usual response from consumers who don’t follow the industry: why are electric cars less attractive than traditional vehicles? If car makers want more AFV sales, then they have to focus their efforts on launching more SUV models and more attractive cars. The former may be more complicated considering their weight and sizes, but the latter is definitely a matter of taste and design. Meanwhile, improvements in terms of batteries, infrastructure and pricing won’t be enough, as long as what’s on offer appeals only to a niche group of consumers rather than the mass market. 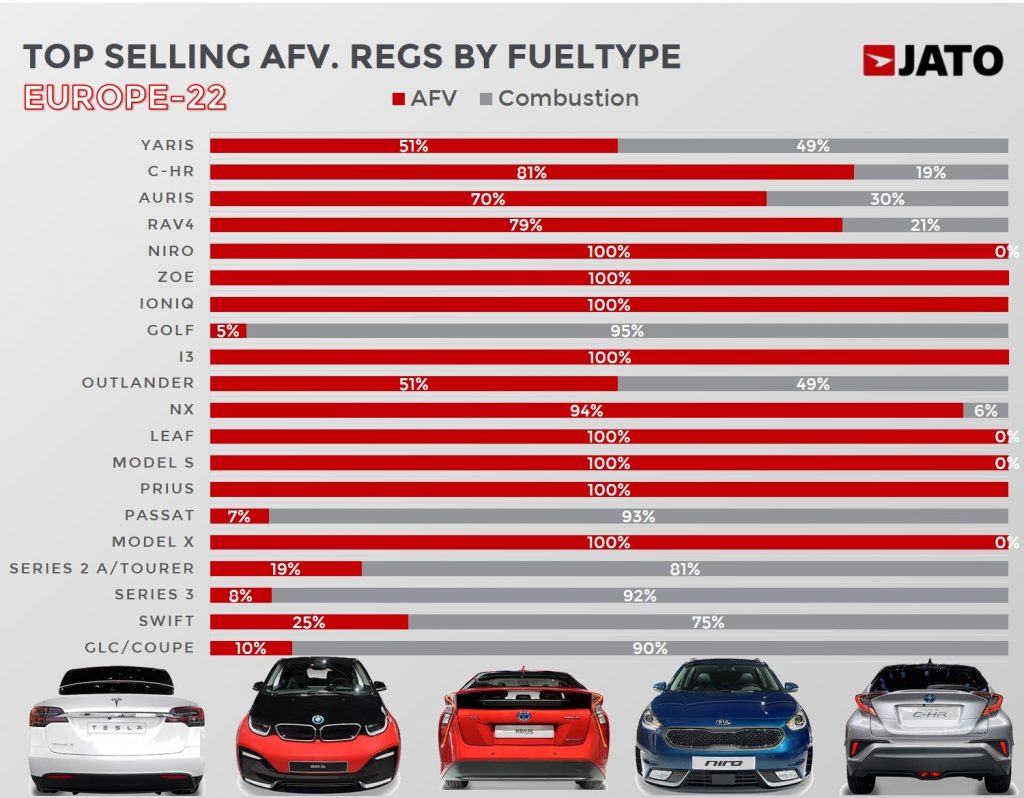