In recent years, SUVs have emerged as a favorite for both Europe’s OEMs and consumers. The segment has gained traction not only in Europe but across the world, accounting for 45% of global passenger car sales in 2020. In Europe, SUVs accounted for 45% of total registrations through August. But, has the popularity of these vehicles been enough to offset the decline in sales seen across other segments? 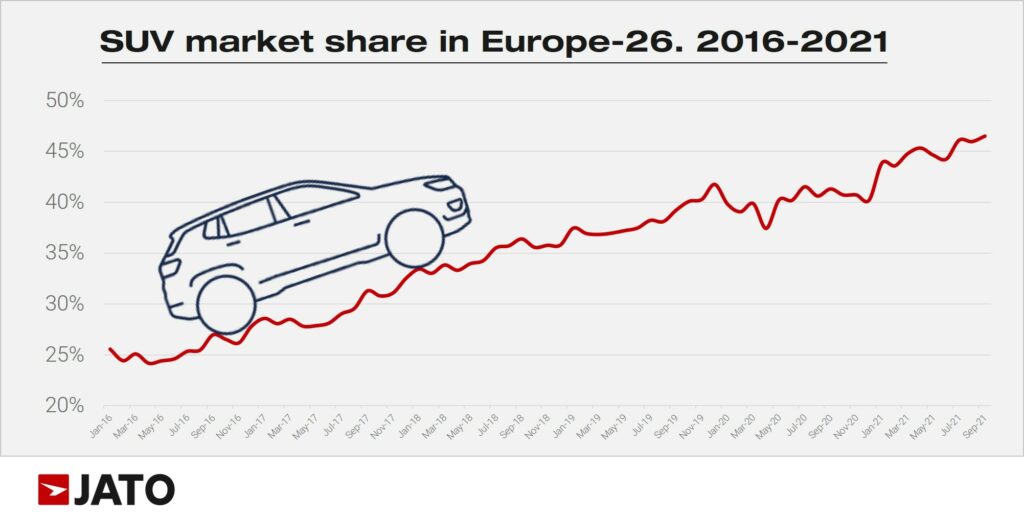 Between 2000 to 2007, new passenger car registrations remained within the range of 15-16 million units. In the wake of the financial crisis however, the average from 2008 to 2016 fell to just 13.7 million units. After a period of recovery, registrations fluctuated between 15.5 and 15.7 million units per year until the COVID-19 pandemic took hold last year. Looking to today, the market has failed to grow beyond the levels recorded 20 years ago – in fact, between 1991 and 2019 it only increased by 11%.

Like the US-Canadian and Japanese markets, the European new car market is relatively mature. Therefore, for OEMs looking to increase profitability this means finding new ways to cut costs or attract customers from rival brands. 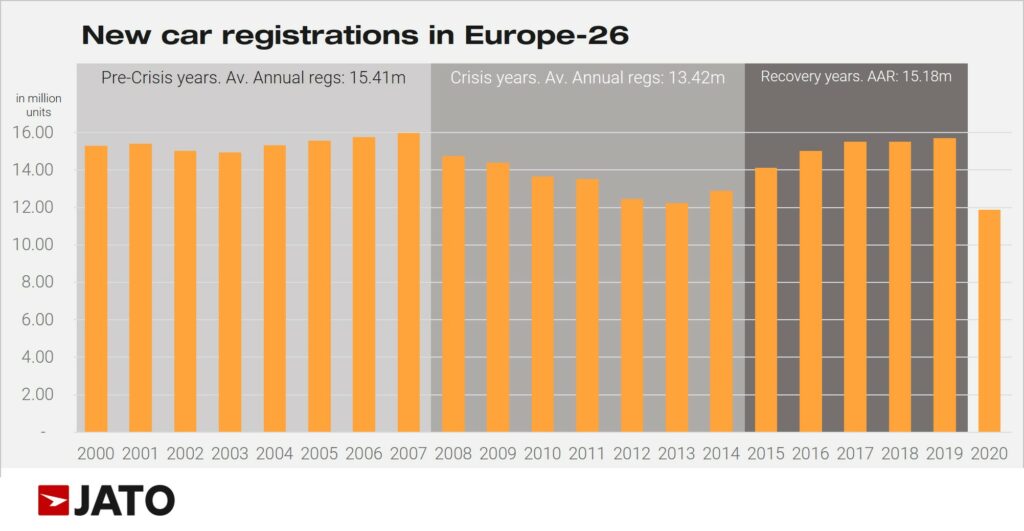 With a limited number of new customers entering Europe’s new car market each year, OEMs have created new segments to attract consumer attention. Developed in the US in the late 90s, SUVs were quickly picked up by European manufacturers and when formally introduced to the market, these vehicles soon became a real alternative to the traditional hatchbacks, wagons and MPVs that dominated Europe’s roads for decades. For OEMs, SUVs allowed them to enhance their model offering while charging more for vehicles that were largely identical to their hatchback equivalents. 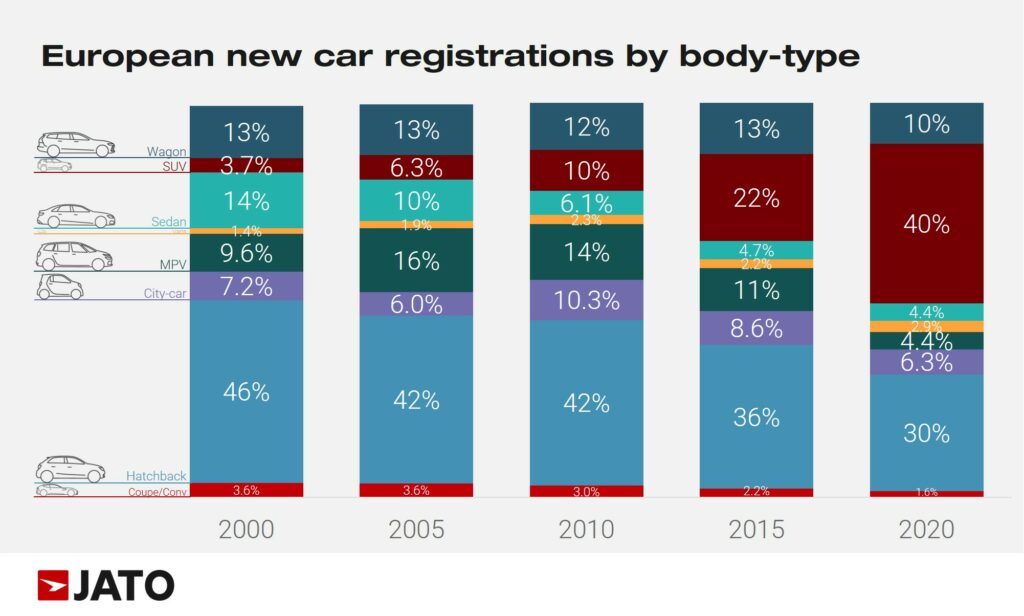 Consumers were, and still are, willing to pay more for an SUV than the traditional alternatives. For manufacturers that have struggled to hit targets over the last 10 years, they have become a welcomed revenue stream, however the surge in SUV sales has not come without negative consequences. The most significant of which has been the impact on CO2 emissions.

More SUVs, but at what cost?

If anything is clear, it’s that the rising popularity of SUVs has come at the expense of traditional segments. OEMs have worked hard to develop a wide range of SUVs, and this has directly affected the preferences of consumers, with many now considering these vehicles to be safer and generally more appealing. And while SUVs have helped OEM profit margins, this has had little impact on total registrations volumes which continue to plateau. 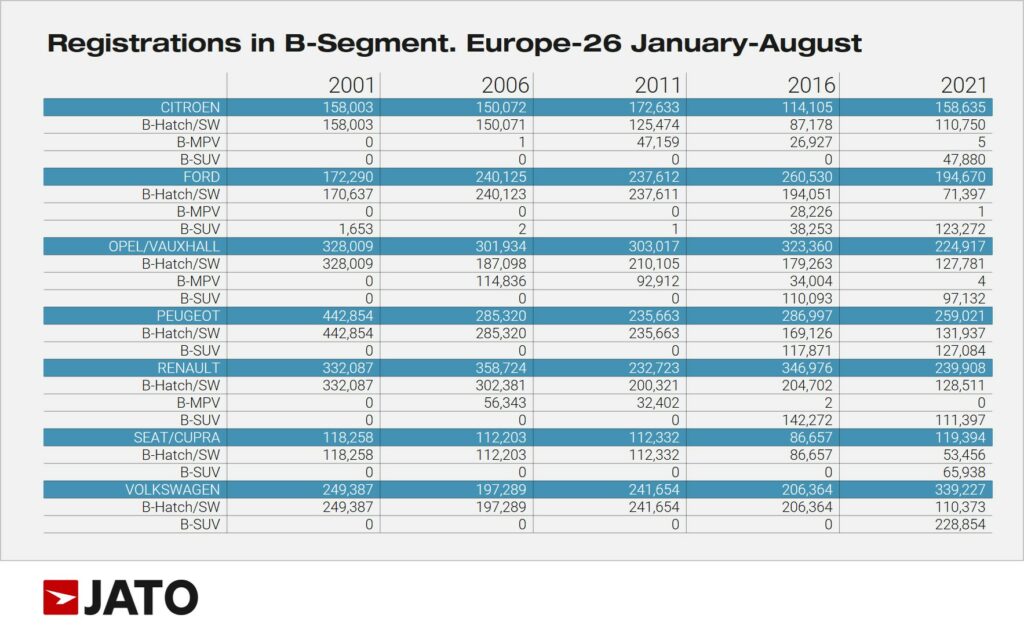 According to JATO’s data for Europe, the seven European car brands that focused their efforts on developing SUVs, have seen their overall sales in the B and C segments fall dramatically between 2001 and 2021.

In 2001*, the Peugeot 206 was the best-selling B-Hatch in Europe, with almost 443,000 units. At this point it was the only model offered by Peugeot within the B-segment. By 2016*, the 2008 joined the Peugeot line-up as its SUV counterpart to the 208 with some success. The 2008 became Europe’s second best-selling B-SUV, however, that year both models sold just 287,000 units combined, or two thirds of the volume sold by the 206 in 2001. This year through August, their registrations combined did not exceed the 260,000 units. Other manufacturers – including Opel/Vauxhall, Renault, and more recently Ford –have all experienced the same problem.

The same trend can be seen across the C segment. In 2001*, the Volkswagen Golf led the segment and the market with 466,000 units. Five years later, the Golf was also available as an MPV (Golf Plus) at which point registrations in the segment totaled 474,000 units. Overall volume continued to increase in 2011 and 2016 thanks to the arrival of the Tiguan; however, the figures through August 2021 indicate that the combined registrations of the Golf, Golf Sportsvan, Tiguan and Tiguan Allspace totaled 314,300 units (or 390,600 units including the ID.3 and ID.4). In other words, a single model in 2001 found more customers than six models combined in 2021. 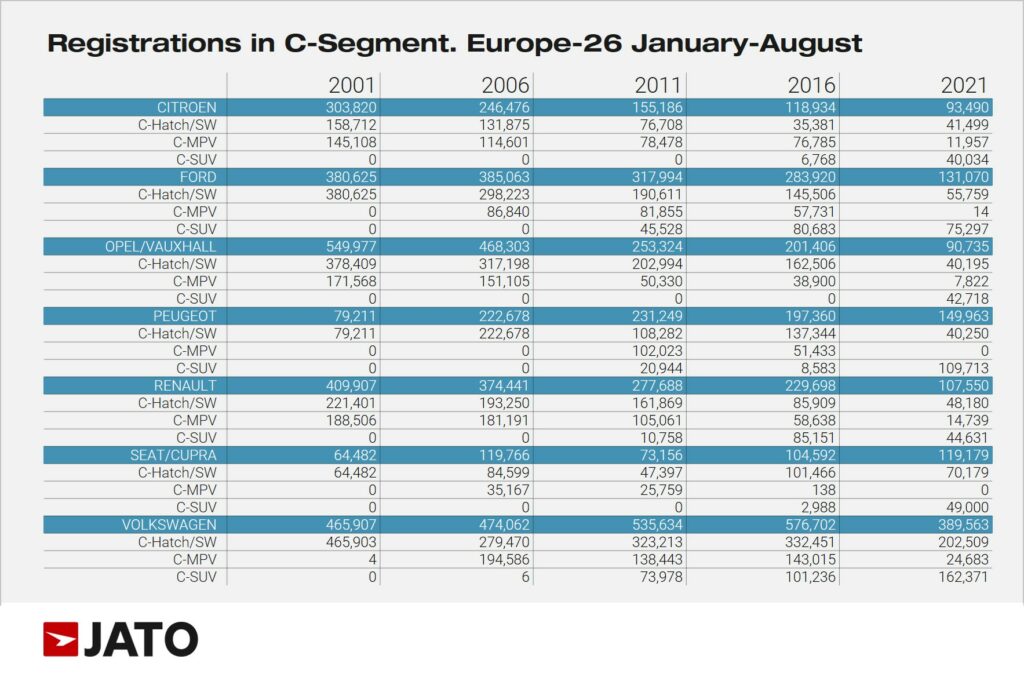 Although most European OEMs are now selling fewer cars than previously, interestingly many are seeing better profit margins than they were 10 or 15 years ago. With the average retail price of an SUV 59% higher than that of a hatchback in Europe**, it is perhaps clear why sales declines across the traditional segments have not been a greater cause for concern. However, this decrease in total volumes has not come without complication.

Manufacturers still rely on sales across their model line-ups to ensure that large factories can operate at capacity. Lower volumes equates to a less efficient production line and potential problems with resourcing and redundant infrastructure. OEMs are facing similar challenges as they adapt their current factories to produce EVs, despite the fact that production levels are a long way off from those achieved by ICE vehicles.

Some OEMs including Volkswagen Group, BMW and Daimler, and Asian brands like Hyundai-Kia and Toyota, have capitalizes on the SUV boom, increasing their market share with new products and powertrains while maintaining their position across the traditional segments.

This has resulted in a lower market share for the likes of Ford, the late FCA and PSA-Opel. While they have also enjoyed some success in the SUV segment (the Peugeot 2008 is Europe’s second best-selling SUV, while the Ford Puma hit the top 10 in August), their presence in the small segments (A, B and C) and in the larger ones (D and E), along with market share in the MPV segment has dropped considerably. These manufacturers in particular have had to contend with brands attacking from below with value SUVs like Renault’s Dacia, and from above by the numerous new premium SUV that have entered the market.