Rise in SUVs hold OEMs back from meeting CO2 targets

JATO Dynamics’ data for average CO2 emissions reveal one inconvenient truth. Rising demand for SUVs is expanding the gap between average emissions achieved and the incoming targets set by the EU. As a result, many OEMs are facing a tough decision – sacrifice sales from SUVs or risk not meeting the target.

SUVs’ emissions are 36.5 g/km higher than EU target
As SUVs are an essential part of the European car market, it is vital to determine their contribution to CO2 emissions. In 2019, these vehicles accounted for 38% of the registrations recorded and posted the fourth largest CO2 average emissions among 10 different segments. The average CO2 emissions produced by SUVs was lower than the average posted by sport cars, luxury sedans and vans, which when combined accounted for 4.5% of total registrations in Europe. 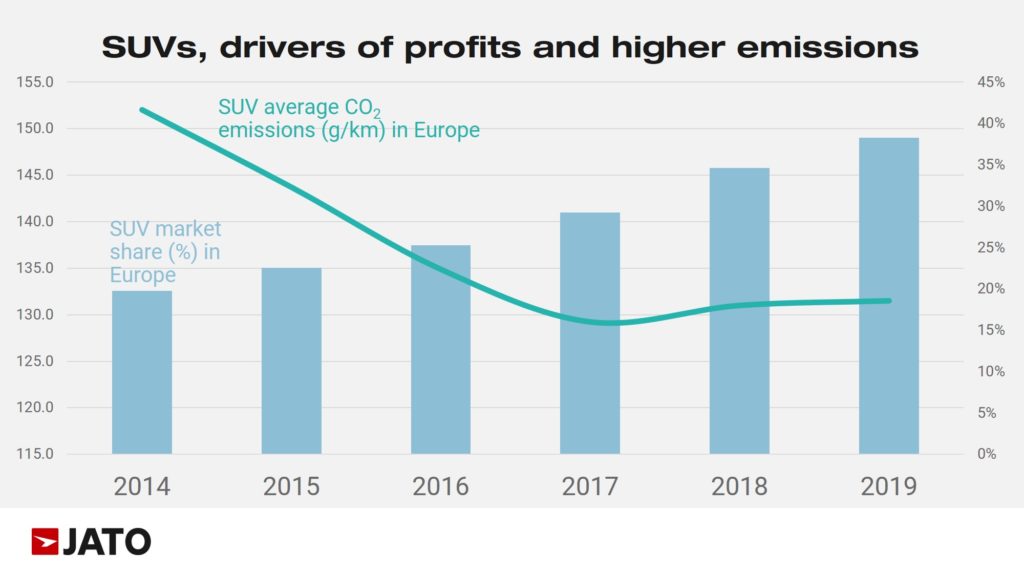 Currently, SUVs are extremely far from meeting EU regulation, posting 131.5g/km in 2019, compared to the target set – 95g/km. With this in mind, many may view the purchase of SUVs as unethical, given the huge environmental challenges ahead.

This presents a dilemma. SUVs are useful for helping increase sales and profitability for OEMs, but they are pushing them further away from meeting emissions targets, due to their size and weight. The challenge becomes how to maintain profitability while meeting EU targets and avoid penalties. 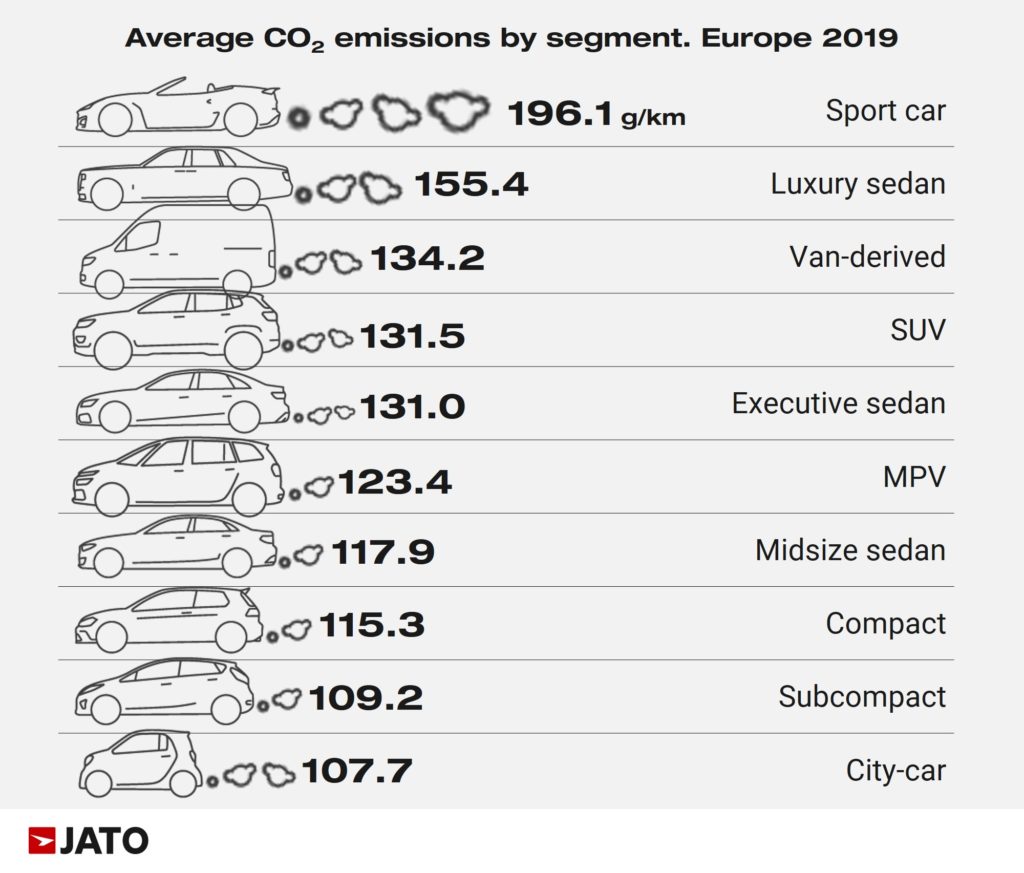 OEMs were already facing an increasingly difficult backdrop last year – when the Chinese market dropped significantly, and sales stalled across Europe and the USA. During such periods of volatility, maintaining large production plants and facing declines in consumer confidence is already extremely difficult without also having to meet EU regulations.

Additionally, as the fight for profitability will be intensified as the race for electrification drives ahead, OEMs will be pushed to their limits. This process has enormous costs attached, that will start to heavily impact balance sheets, sooner rather than later.

Smaller SUVs offer a solution
One potential solution to these problems comes from the introduction of smaller SUVs. They are lighter, more fuel efficient, and in most cases don’t feature the 4×4 drivetrain that complicates things even further due to their fuel consumption. Their average emissions last year were 122.7 g/km, which despite increasing by 0.4 g/km from 2018, are still significantly lower than other SUVs. 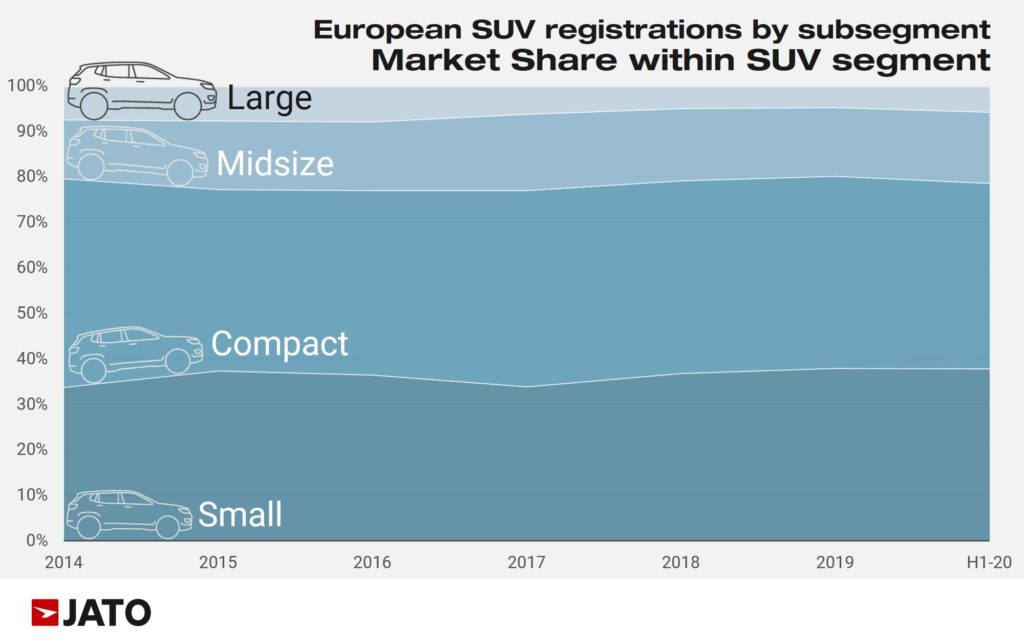 While better than other models, even these SUVs are a way off the averages posted by small, compact and even midsize cars. This is due to a lack of electrified options – in 2019, there were only four models available with electrified versions. Their registrations accounted for 2% of the segment’s total volume, meaning that without an increase in choice, consumers will continue to buy damaging gasoline and diesel models.

One thing is for certain – with regulatory deadlines around the corner, brands are likely to think twice before launching more SUVs, especially given that any profits they make could easily be depleted by rising penalties.

Subcompacts secure second lowest average
The B-Segment cars or subcompacts (also known as super minis) are a big segment in Europe. Despite market share falling over the past five years, due to the popularity of small SUVs, they are still key for volume levels for many OEMs across Europe.

While they may not be as profitable as their SUV counterparts, they are popular among young consumers and their average emissions in 2019 were the second lowest after city-cars, at 109.1g/km. This is still higher than their average registered in 2018 (106.8g/km), however efforts have been made to counter this, with attempts to electrify their line-up. The Renault Zoe, which has been on the market since December 2012, has finally taken off over the past two years. It is now the referent for pure electric small cars and has opened the door for many new entries, such as electric versions of the Peugeot 208, Opel Corsa and Mini Hatch. However, for volume, the real driver of change has been the Toyota Yaris hybrid, with registrations totalling 104,600 units in 2019 – half of the brand’s volume in Europe.

Compact cars still need to adopt EV technology
The C-Segment is the third largest in Europe, after the B-Segment and SUVs – some of the most important models sit here. The Golf, Focus, Octavia, and more recently the A-Class, A3 and 1-Series are very popular among consumers. Their average emissions totalled 114.8g/km in 2019, which is the third lowest segment and similar to levels recorded by bigger midsize cars (D-Segment), at 115.9 g/km. In fact, when comparing the sizes and weights of these two segments, one would expect a bigger gap in emissions. 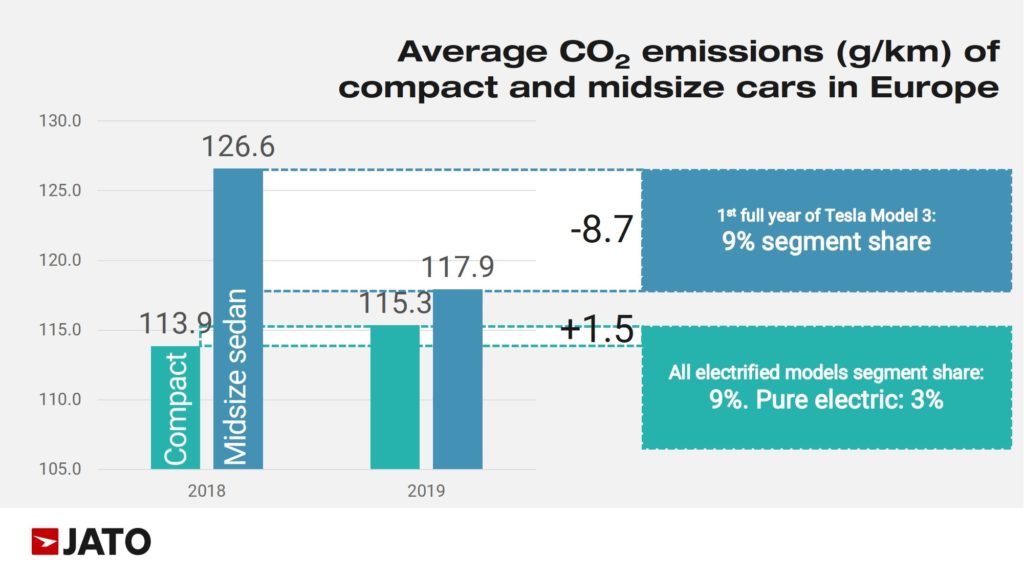 The reason for their similar averages is due to the arrival of the Tesla Model 3. With zero emissions, it had a strong start in the market – during its first full year it sold 95,000 units, becoming Europe’s top selling midsize sedan above other popular nameplates such as the BMW 3-Series, Mercedes C-Class and Volkswagen Passat.

At this time, the compact segment did not release a model with new, competitive features to rival Tesla. The Nissan Leaf, Volkswagen e-Golf and Hyundai loniq lack the ‘wow effect’ and are relatively expensive when compared to their gasoline and diesel counterparts. However, this is likely to change, following the introduction of the new generation Golf, Volkswagen ID3, and electrified versions of the premium hatchbacks.

What next if SUVs continue to gain traction?
If consumer demand increases for SUVs, OEMs will likely be facing extremely high penalties. It will not be easy to stop production of the vehicles that have driven sales and profits over the past 10 years. The electrification of these vehicles could be a solution, but in the short term many brands will be forced to discontinue some of their SUVs.

Although this is one way to reduce average emissions, OEMs will face large fines if no further action is taken to reduce emissions by the end of the year. In addition to the unprecedented outbreak of COVID-19, the industry must now face the challenge of EU regulations and resulting penalties head-on.