The focus of this year’s Shanghai motor show is confirmation of the electrification of the Chinese car market. The Chinese government continues to push car makers to accelerate the shift from combustion engines to new energy vehicles. During the motor show, which opens its doors this week, we will see how the main players are responding to higher demand and lower public incentives.

In contrast to what’s happening in Europe, the shift to electrics is a real opportunity for local manufacturers. While the big players in Europe struggle to meet the tough CO2 emissions targets, their Chinese peers have been able to gain traction and have several advantages compared to their European, American, Japanese and Korean rivals.

China is breaking paradigms. The thinking in Europe is that electrification is an expensive process with the costs being absorbed only by big and expensive cars. With very few exceptions, most of the EV market in Europe has been focused on the upper segments. In 2018, 45% of EV sales in Europe corresponded to cars priced above €40,000*. This is even more noticeable in the USA, where that figure grew to 62%.

Thanks to their advantages in terms of volume and political support, the Chinese manufacturers are capable of producing small and cheap electric cars. But most importantly, these cars find consumers who want to take advantage of the government support for clean emissions. The result of this policy is that the biggest part of EV sales in China comes from small cars (citycars and subcompacts).

JATO’s figures show that there is a big price gap between China and Europe and the USA. The average retail price (excluding any kind of incentive) of EVs sold in Europe and the USA in 2018 was 58% and 52% higher than in China, respectively. This is a huge difference that partly explains the EV penetration in each market. For example, the Chinese EV market was 3.5 times bigger than in the US, but the ratio of their total vehicle sales was 1.6.

A market controlled by local brands

In 2018, EV sales (BEV+PHEV) in China totalled 1.12 million units, up by a massive 88%. As a result, it is by far the largest EV market in the world. In contrast to the overall market composition, the electric vehicle market is mostly controlled by Chinese manufacturers, whose sales accounted for 89% of the volume. 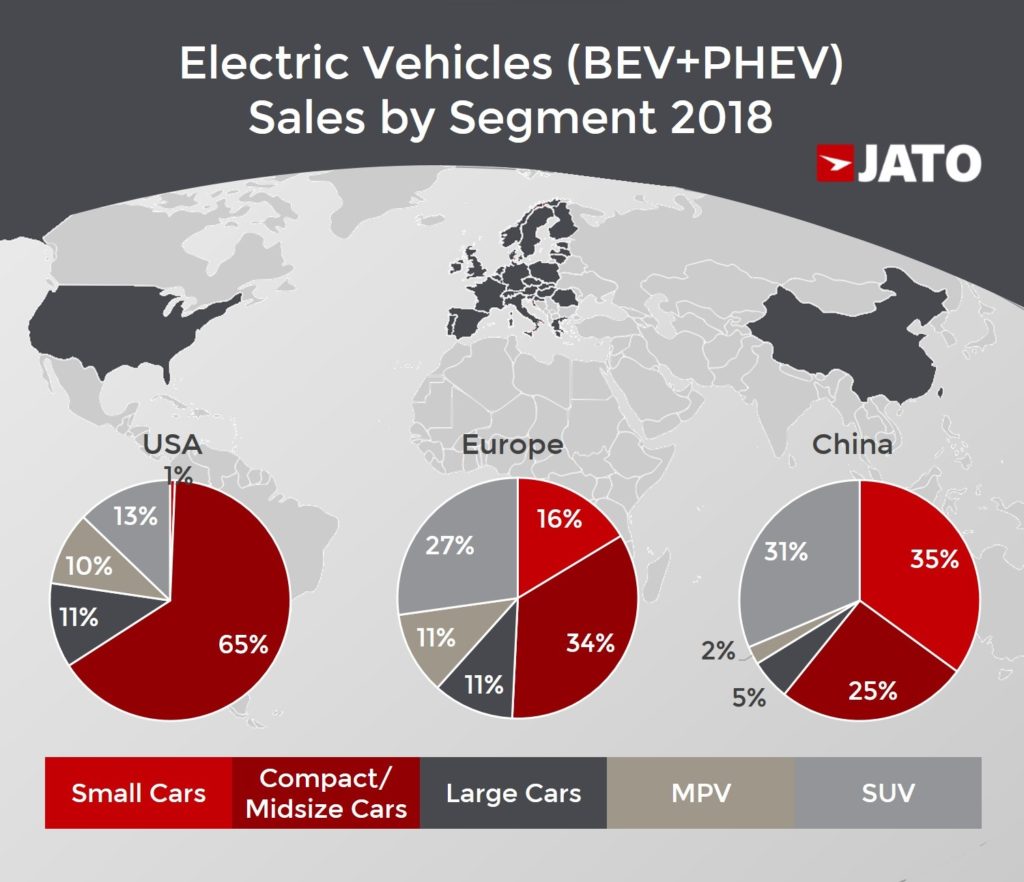 The strong presence of the Middle Kingdom brands is also reflected in their key position during the motor show in Shanghai. Their new cars and concepts are as impressive and appealing as their foreign rivals, and the days when consumers noticed a big gap in quality and design are firmly in the past. In Shanghai, eight of the 17 most important EV launches are from Chinese brands.

Tougher rules in Europe will only benefit the Chinese makers

As the CO2 emissions targets for 2021 get closer, and the main players in Europe look for any way to reduce their averages, it is clear that there is a big opportunity for China. Most of the car makers operating in Europe are unlikely to meet the targets, which will have potential consequences on their profits. Some of them, like Renault-Nissan and Volkswagen, are accelerating their electrification plans, while others like FCA are making use of the super credits policy. 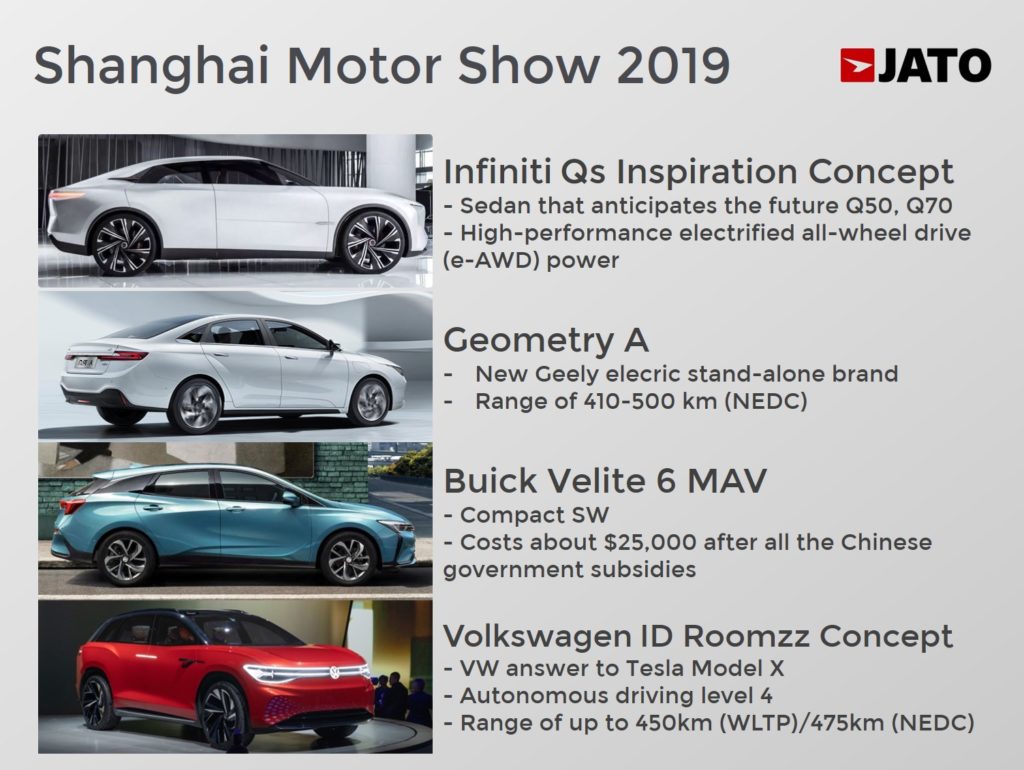 And then there is China, with its government support for electrification and strength of big volumes. But so far, the Chinese car makers have not been able to enter the European market, due to stricter regulations around quality and strong . China is still some years behind its Western competitors when making ICE cars. 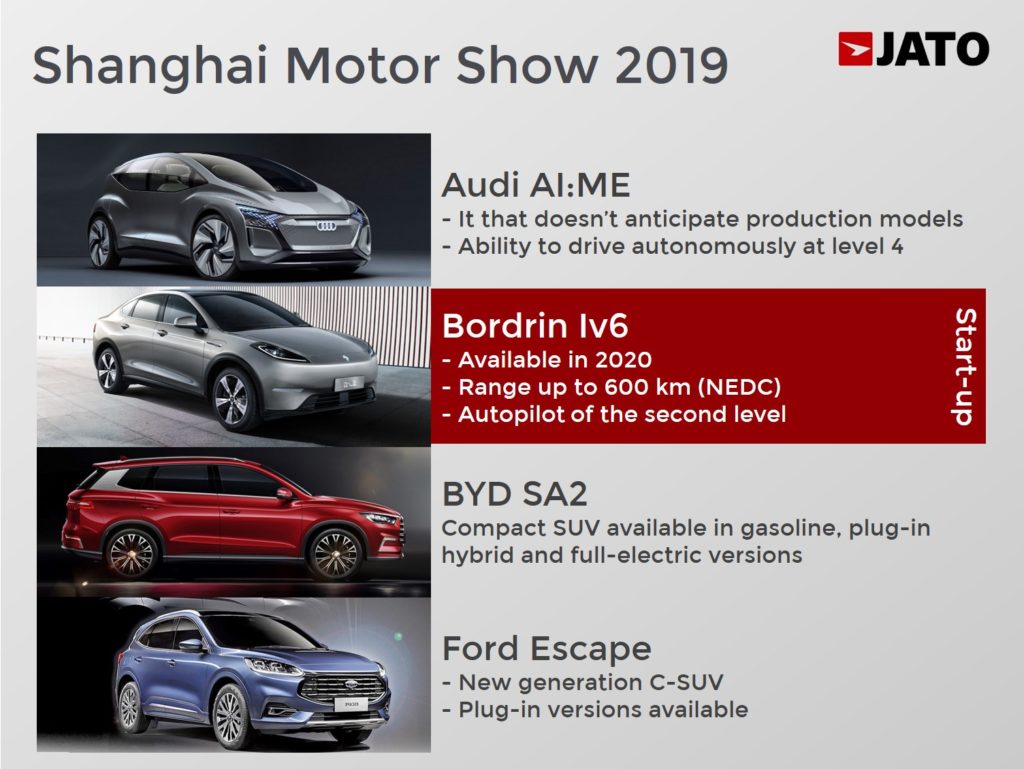 This is not the case when talking about new energy cars. The race for electrification started more or less at the same time everywhere, and so the experience and know-how among all players in the global industry is along the same level. Based on this, any single advantage helps in pursuit of the leadership. China has two major advantages compared to the USA and Europe.

Firstly, the Chinese government began to consider EVs as crucial for economic development well before the rest of the world – as electrification is key for the future of Chinese economic growth. Secondly, as a result the government has placed electrification among its priorities and has provided several subsidies during the last few years.

The stimulus from the authorities has two main aims: to accelerate the adoption of these technologies, and put Chinese cars in global markets. By reducing the incentives of EVs with range under 150 km, the government is simply pushing the demand to focus on vehicles that have more chance to succeed overseas. A big part of the current Chinese EV market is composed of two-seat mini cars that do not fit the standards in developed economies.

Within this context, Europe is becoming a prime opportunity for the global expansion of the Chinese car. Its rivals may be more famous and have a bigger presence, but China is on track to have the right product by the time the targets start to shake the European market. And that will be the biggest impact of the emissions policy.

*Data for the passenger cars registered in Norway, Germany, UK, Sweden and France.