If the Renault board accepts the merger proposal made by FCA, the new group would not only become the world’s third largest carmaker by revenue and unit sales, but it would also lead the global market’s key segments.

According to the latest figures and Renault Group’s official data, both companies sold 2.86 million SUVs together last year. And in total, the two makers sold 8.5 million vehicles globally in 2018 – meaning 1 in 3 was an SUV.

With 2.86 million SUV sales, FCA-Renault would rank first in the global SUV rankings. The merged group would overtake Toyota, which led the rankings last year with 2.6 million SUV sales, and Hyundai-Kia and Volkswagen Group, which followed with 2.5 million sales.

SUVs – the drivers of global growth

The SUV segment has been the driver of global growth for many years. As the boom started in North America and then spread into other regions like Europe, Russia, India, South America and China, many carmakers have made use of SUVs to finance their expansion plans. 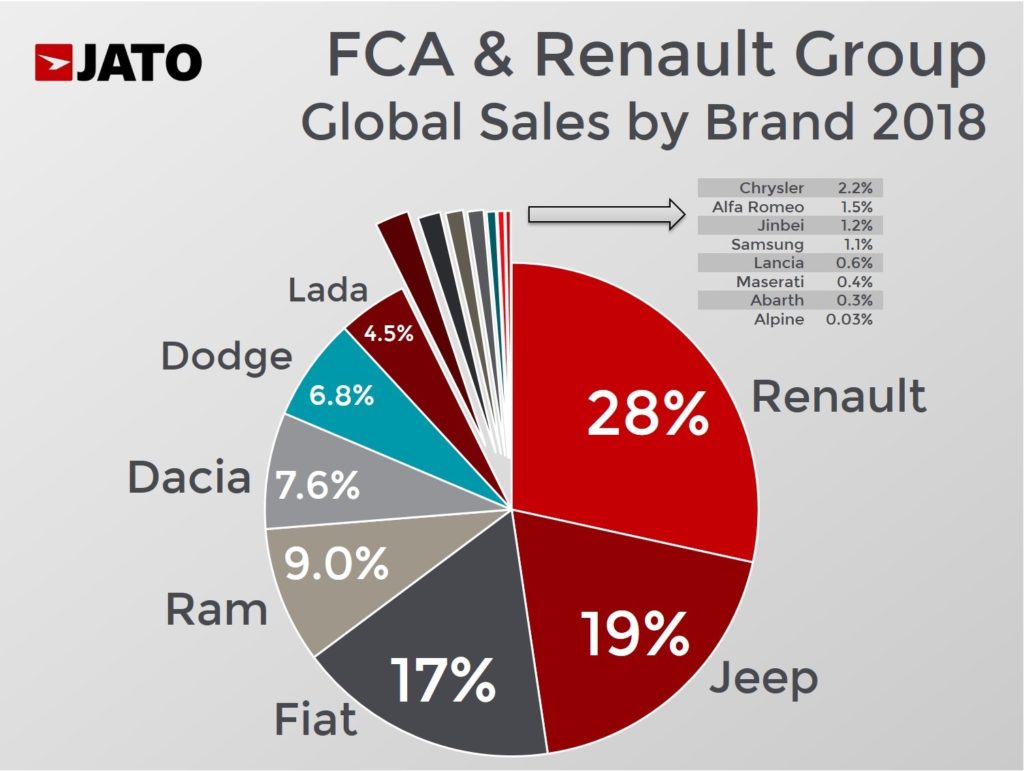 Thanks to the trend, FCA has been able to offset the big decline in sales posted by its cars in the traditional segments. Last year, while global demand for small cars (A and B segments) fell by 7% and global demand for compact cars and midsize sedans dropped by 27%, the Italian-American maker increased its SUV sales by 10%.

Jeep is without a doubt the biggest success story from the Fiat and Chrysler groups. Since the first acquisition of the American maker by the Italians, the brand’s sales have increased nearly fivefold. Today it produces its vehicles in six different countries and its volume counts for 34% of FCA’s global sales. 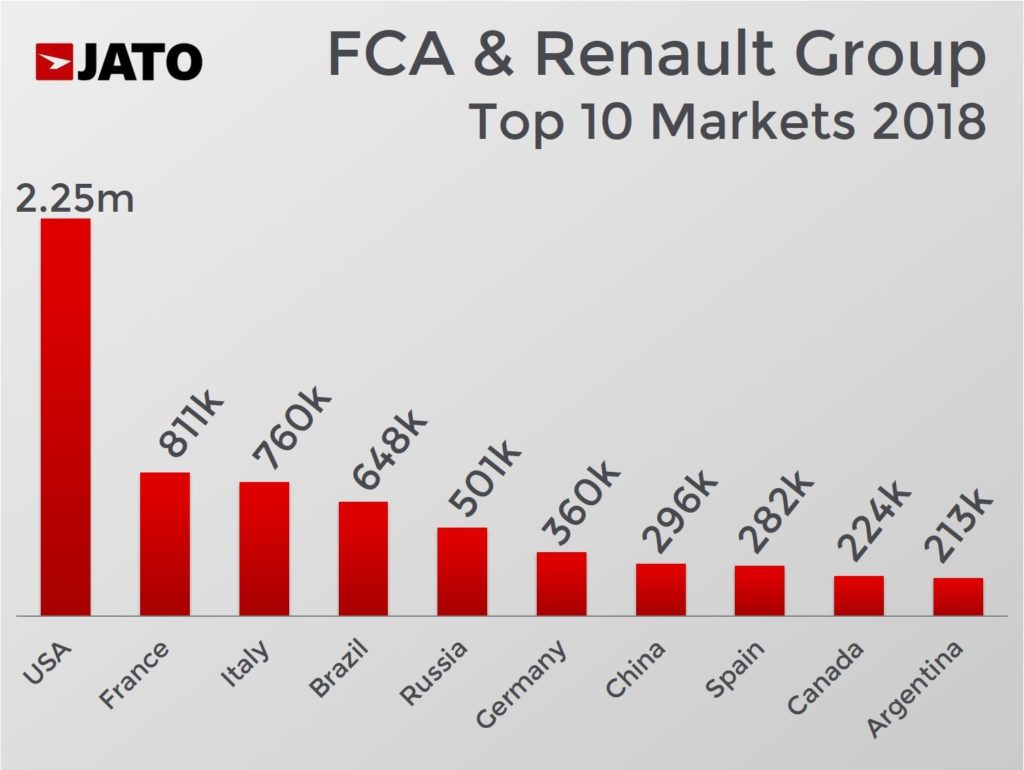 Renault has also done a lot in terms of “SUVification”. Due to its alliance with Nissan and its strong presence in Europe, the Renault Group has been able to gain momentum in the SUV market. In 2009, with only two models in its lineup (the Duster and Koleos), it sold only 45,800 units, counting for 2% of its total global sales. But ten years its sales have increased to 948,400 units – now accounting for 24% of the total.

A new leader in the B-Segment

The subcompact segment would also have a new leader if the merger goes ahead. The Renault Clio would be joined by the popular Fiat Argo and Cronos, giving the combined group more than 1.86 million sales in the segment. This would be ahead of Volkswagen Group with 1.7 million sales and Toyota with 1.14 million. 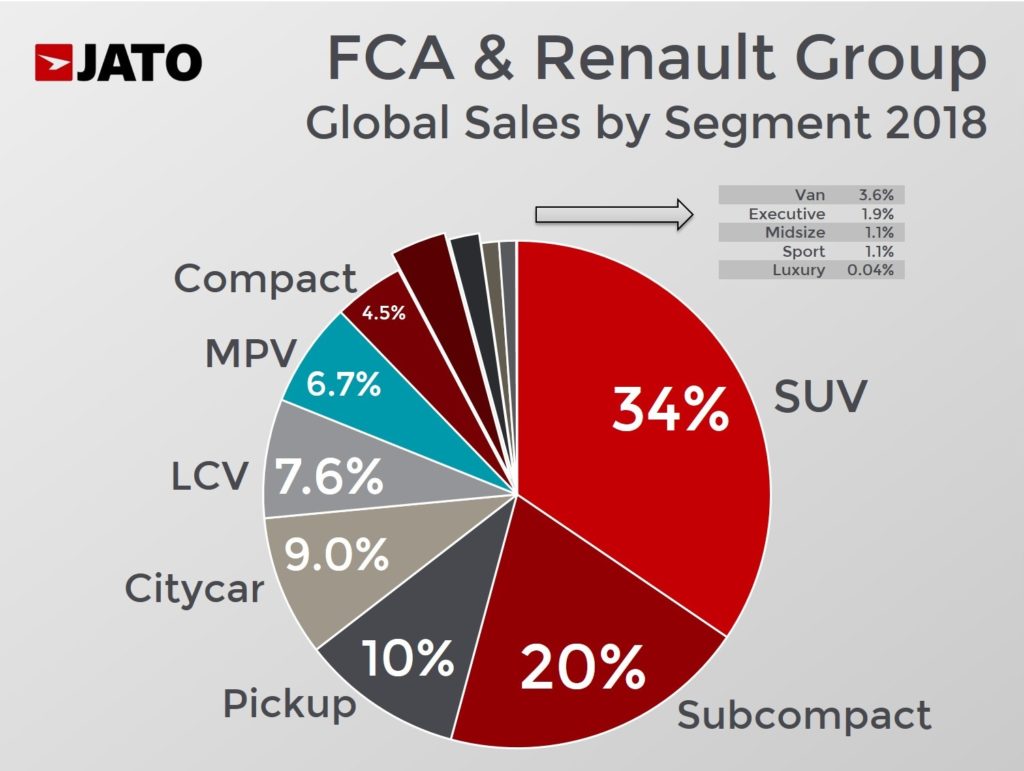 The Clio was the world’s second best-selling subcompact in 2018 and it would help FCA to re-enter the European B-Segment, just like Peugeot helped Opel with the all-new Corsa. Even if it is not profitable and no longer grows in Europe, the B-Segment is still very important for enhancing market production and keeping plants running.

The potential FCA-Renault merger would also dominate the Pickup and City-car segments, where they would become the world’s third largest maker.

Renault sends a message to Nissan

Renault is due to give an answer to FCA on the merger next week, but the French maker is using the opportunity to send a message to current partner Nissan over the future of their ties.

After the Ghosn affair, the relationship between Renault and its Japanese associate has deteriorated. Nissan has failed in its attempt to change the status quo and gain more power within the alliance – the immediate effect being the refusal of Nissan to enter a full merger with Renault.

If Nissan continues to refuse Renault’s intentions, then the French carmaker could have every reason to find a new partner.