2021 will be remembered as a year of challenges and change for Europe’s automotive industry. Data gathered by JATO Dynamics for 28 European markets (EU-25 + UK, Norway, and Switzerland) showed disappointing results for new vehicle registrations, however new leaders have emerged amid the crisis.

Volume at lowest point since 1985

Last year, total volume was at its lowest level since 1985, with 11.75 million new cars registered. The semiconductor shortage has been even more damaging to the industry than the lockdown restrictions of 2020. Felipe Munoz, Global Analyst at JATO Dynamics, commented: “Crisis after crisis had a negative impact on demand and registrations in the market. The ongoing uncertainty of the COVID-19 pandemic, alongside the prolonged semiconductor shortage created a perfect storm for OEMs last year.”

The second wave of the crisis began in July as volume started to fall at a double-digit rate compared with 2020. In December 2021, registrations in these countries totaled 949,252, down by 22% from the same month in 2020, and 25% less than December 2019, just before the pandemic hit the market.

While some key markets were able to maintain the levels seen in 2020, JATO’s analysis indicates that the difficulties faced by the German market have been a major driver of the poor results seen across the EU5. Germany saw a significant drop in volume compared with 2020 and its worst results since 1985. It was also the worst year for new car registrations in Austria since 1984, in Belgium since 1995, and in the Netherlands since 1980. 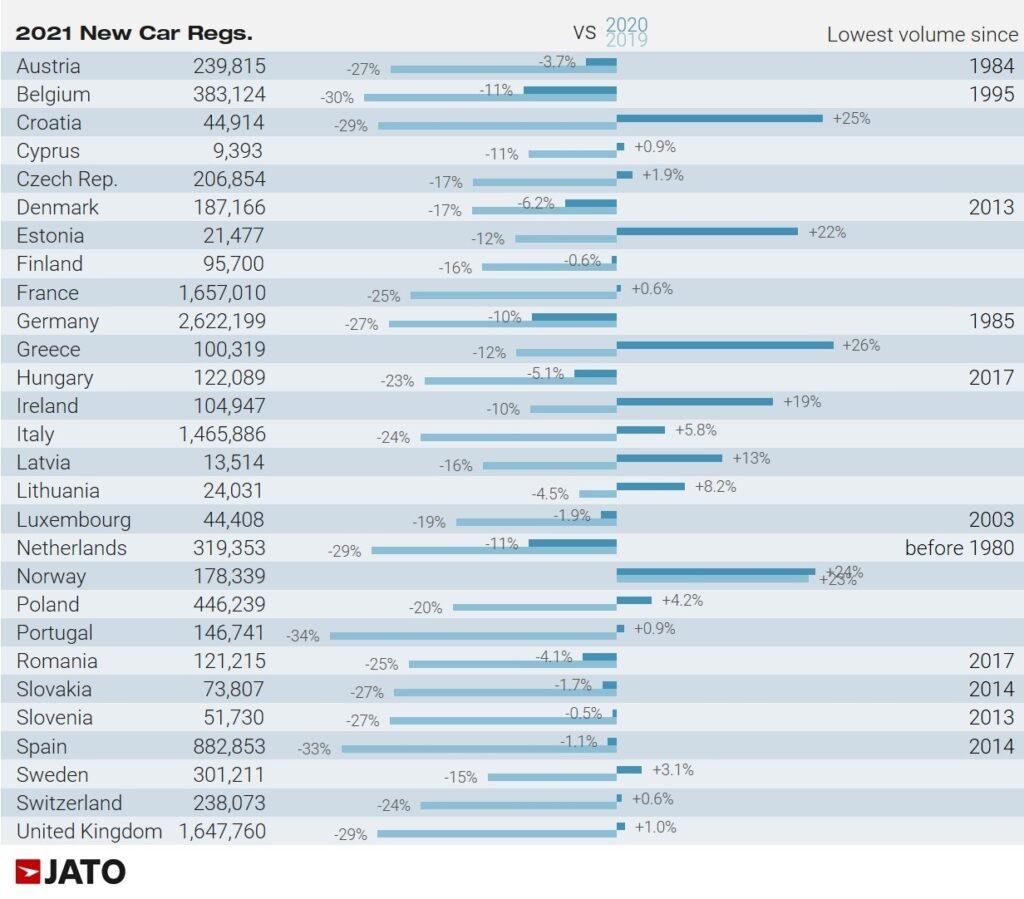 The crisis opened the door for EVs

Despite the poor overall results, the current crisis created an opportunity for low emissions vehicles. Munoz added: “For much of the year, it was easier to buy electric than petrol given the shorter lead times for these vehicles, and thanks to the generous incentives granted by governments.”

Consumers have increasingly turned their attention to pure electric and plug-in hybrid alternatives allowing these vehicles to achieve new volume and market share records. In 2021, the industry registered 2.25 million units making up 19% of the market. While diesels accounted for 21.7% of the market – it is likely that they will be outsold by EVs this year.* 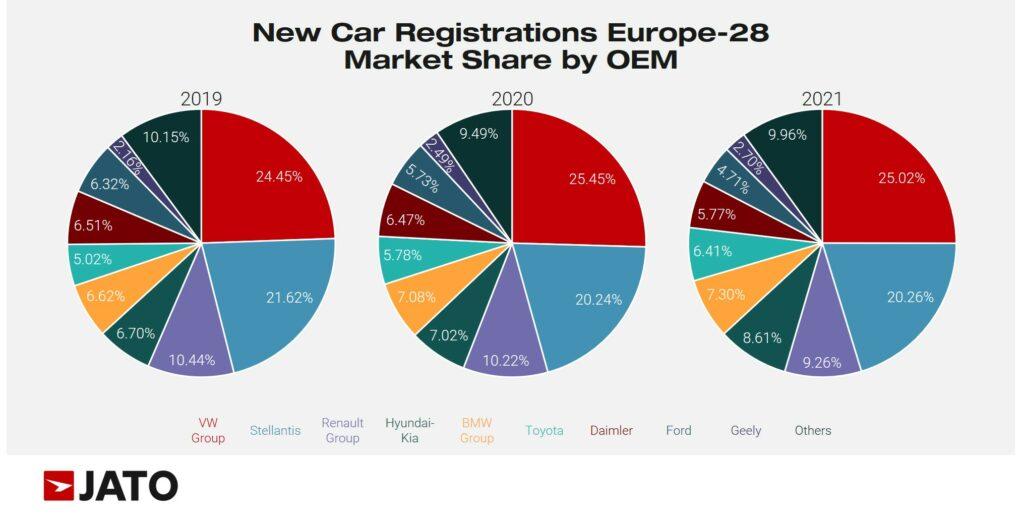 While last year brought huge challenges for many OEMs, for others it offered great opportunities. For example, Hyundai-Kia was able to increase its presence in Europe due to its breadth of competitive SUV and EV models. These brands saw their market share increase by almost two points, from 6.7% in 2019, to 8.6% in 2021.

It was also a strong year for Toyota, up by 1.4 points of share, thanks largely to the latest generation of the Toyota Yaris which hit the top 10 in 14 countries. Despite these advances, Tesla, BMW Group, and Volkswagen Group were still able to gain traction over the last two years.

Despite ongoing availability issues at dealerships, European consumers continued to shift from traditional vehicles such as hatchbacks, sedans and MPVs, to SUVs. These vehicles have continued to perform well thanks to the arrival of new electrified models. Last year, registrations of SUVs totaled 5.34 million units, up by 11% when compared to 2020, and down by 12% compared to 2019. The market share of these vehicles jumped from 38.2% in 2019, and 40.3% in 2020, to 45.5% last year. This is the highest ever market share for SUVs in Europe and closes the gap on the 52.3% recorded in the USA.

Last year Volkswagen Group was the leading seller of SUVs in the region, as one in four registered vehicles were made by the German manufacturer. Compared with 2019, SUV volume only dropped marginally (-2%) whereas Volkswagen’s closest competitor Stellantis, saw its volume decrease by 24%. Volkswagen was in fact the biggest winner of market share between 2019 and 2021, followed by Hyundai-Kia and Daimler. In contrast, Stellantis posted the highest market share drop, followed by Renault Group and Nissan Group.

The SUV ranking by model was led by the Peugeot 2008, outselling the Renault Captur which led the market in 2020. The 2008 saw the largest market share growth of any SUV between 2019 and 2021, excluding models that were not available two years ago. It was not however the only SUV to post double-digit growth since 2019: the Volkswagen T-Cross, Volvo XC40, Toyota RAV4, Kia Niro, and Nissan Juke, also climbed the rankings.

The Volkswagen Golf leads again, but for how long?

The overall rankings by model saw several significant changes but confirmed the Volkswagen Golf as the most popular new car in Europe. The compact narrowly held on to the top spot despite facing major challenges in terms of production and increasing internal competition.

Last year, the Golf gained 205,408 new registrations – less than 10,000 units ahead of the Peugeot 208 in second position. With a 28% drop in volume compared with 2020, and 50% compared with 2019, it is clear that the Golf’s competitors are closing in fast. The German compact has led the European market since 2008, but the increasing popularity of the small and compact SUVs, along with more internal competition, affected its performance. In 2008 its market share in Europe was 3.16% however last year this dropped to 1.75%.

The waning popularity of the Golf is due to its lack of an available electrified model. As more and more consumers look to switch to EVs they are instead opting for the ID.3, Europe’s third best-selling BEV in 2021.

Tesla’s market share doubled between 2019 and 2021. Last year, the American manufacturer registered more new vehicles than other brands such as Land Rover or Jeep – both leaders in the SUV market. Between 2020 and 2021, it was able to outsell Mazda, Mitsubishi, and came close to overtaking Mini.