The most important auto show in Europe opened its doors last Tuesday. I had the opportunity to attend the event during the press days, and look at the latest launches that will hit the European roads in the coming months. A total of 26 all-new cars were presented to the public with great expectations following he good momentum of European car market. Even if it is not clear whether the industry will be able or not to continue to withstand the turmoil taking place on a global level, there are more new cars to choose.

10 of the new arrivals were SUVs, while the remaining 16 cars sat in the traditional segments. In line with the longstanding trend seen since 2011, SUVs continue to be the protagonist. From the small no-frills Tata Nexon up to the premium Range Rover Velar, the event clearly showed how this popular segment is evolving. However, it was also the time for the total renovation of other segments. The subcompacts welcome the all-new Ford Fiesta, Suzuki Swift and Seat Ibiza; the new generation Kia Picanto joins the A-Segment. 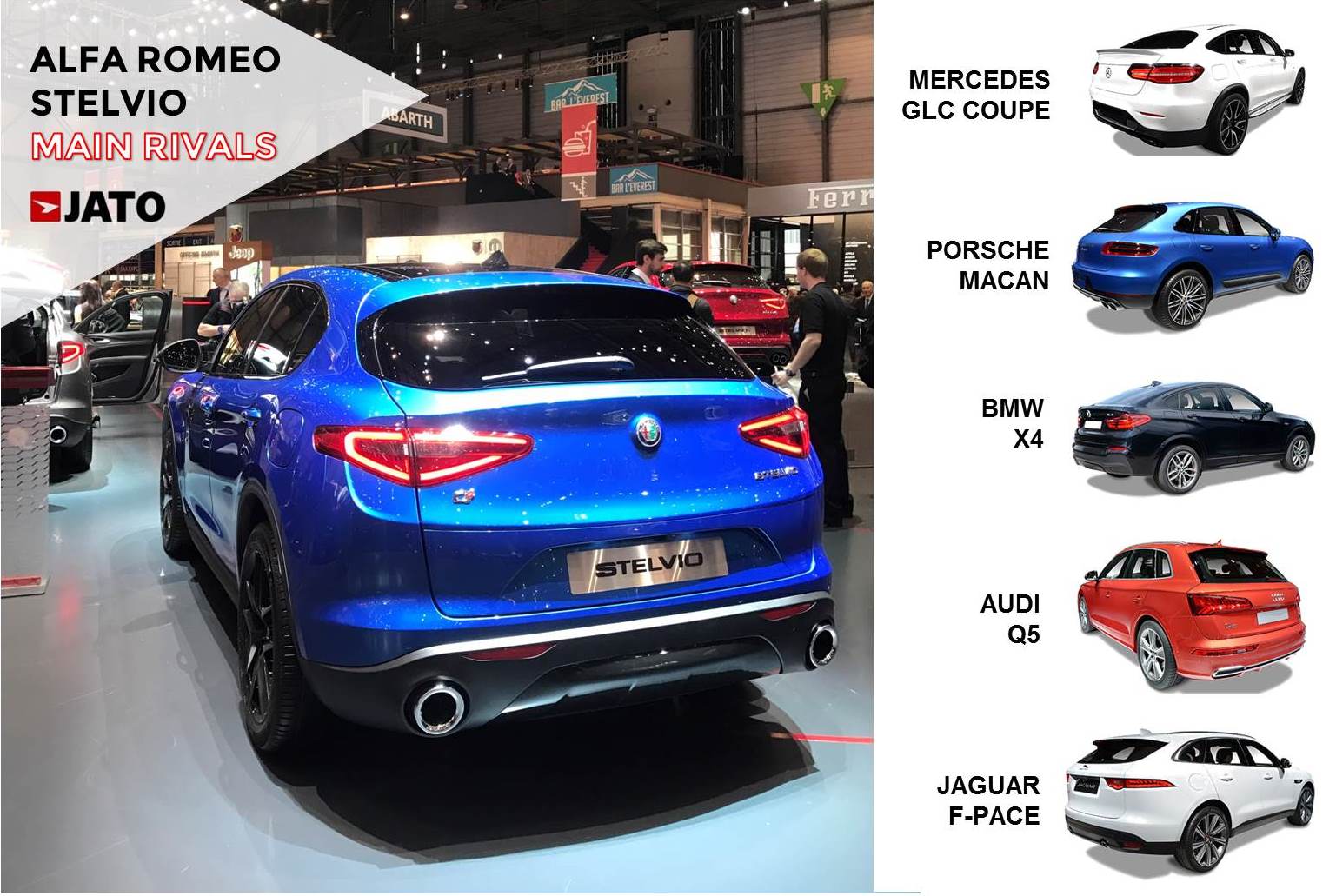 The new Stelvio is now the 5th product on Alfa’s line up, and is expected to become its global top-seller. This car will likely hit the European top 5 best-selling premium D-SUV at its first full year of sales. However, the US is expected to be its main volume driver. 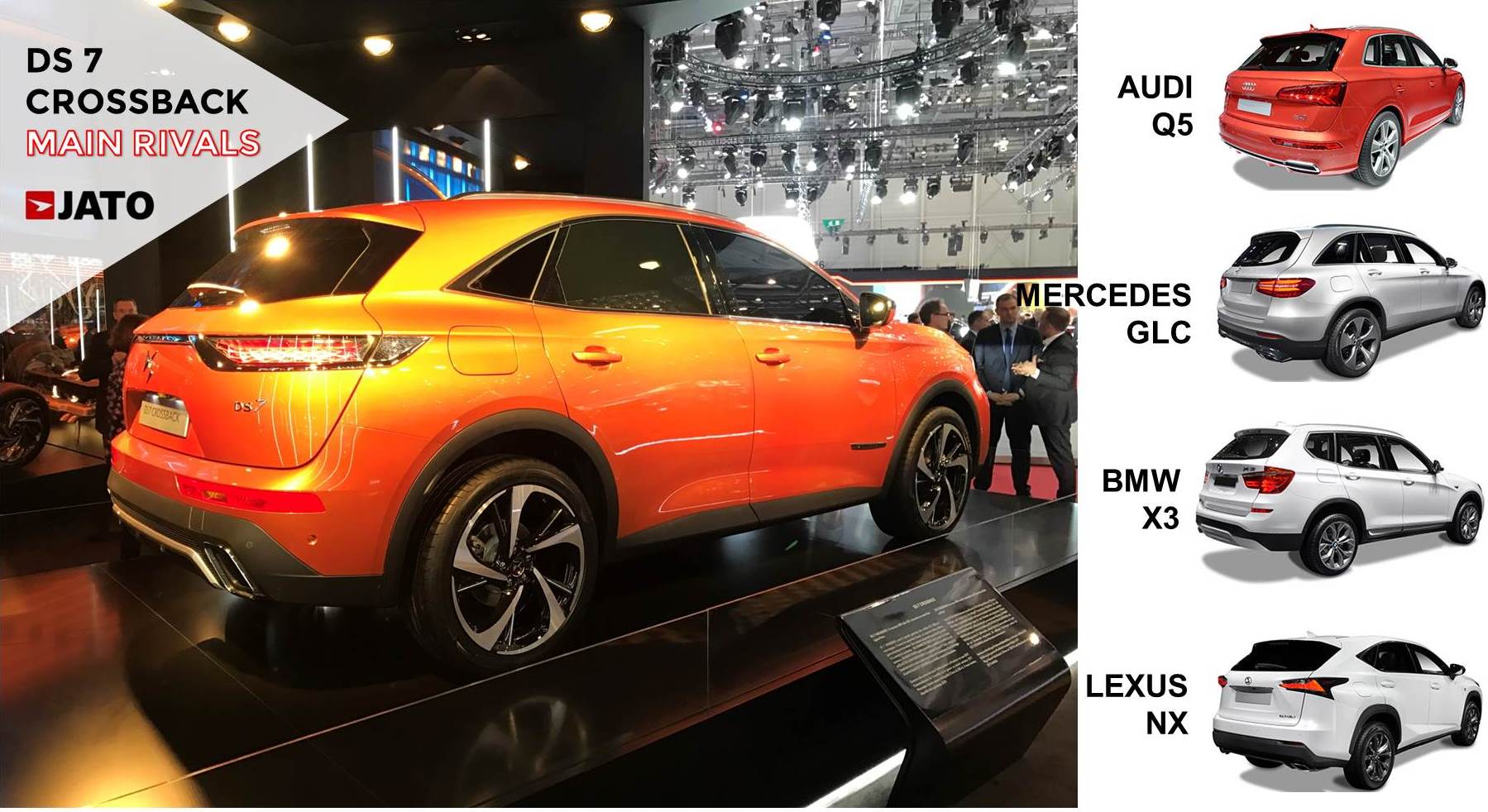 The new DS 7 Crossback will bring some oxygen to the DS brand. It is expected to gain an important position within the French premium D-SUV segment with annual sales at the level of its British rivals. 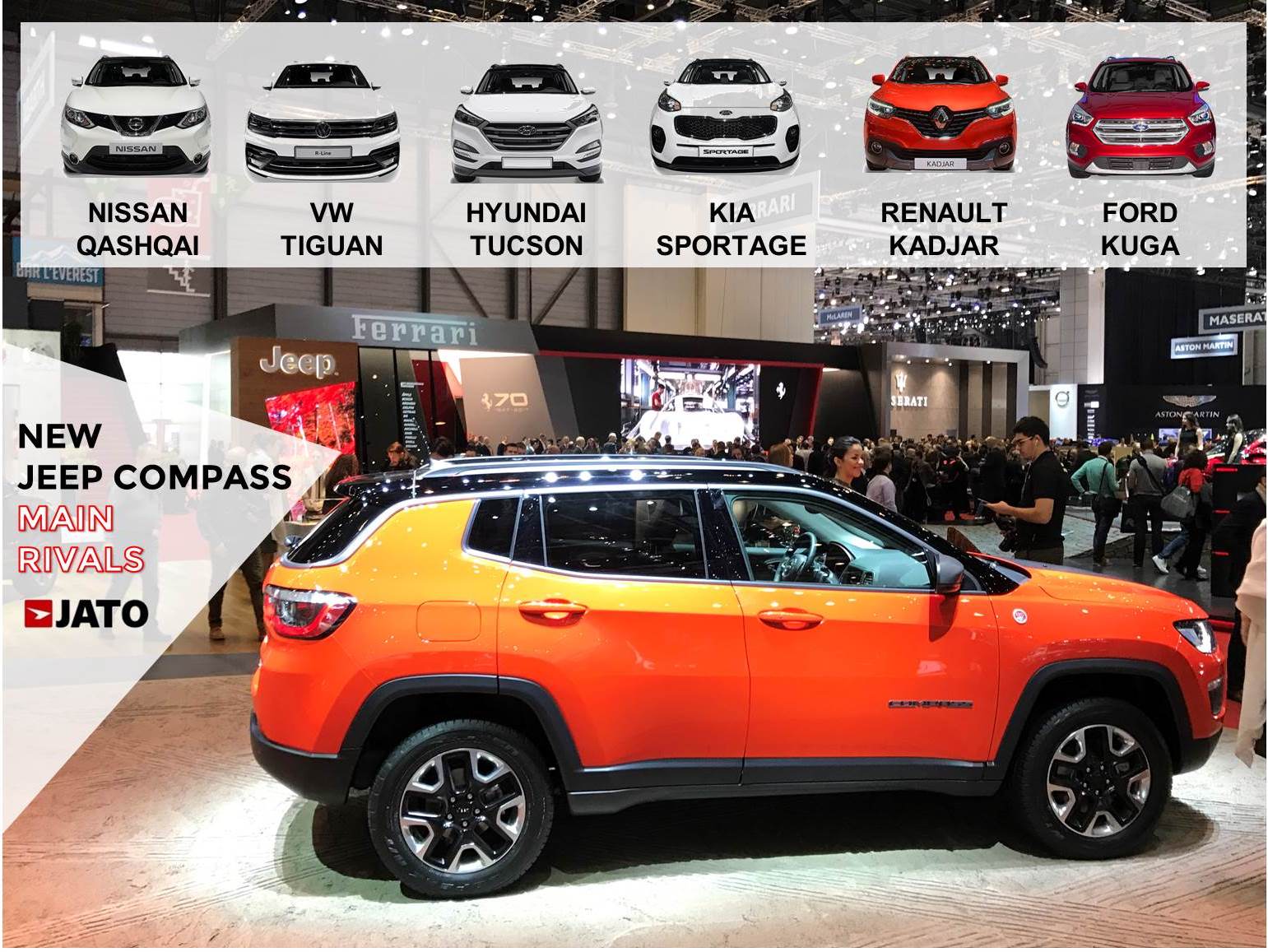 Jeep wants to replicate the success of the Renegade in the compact SUV segment. To do so, the new Compass will hit European dealers soon. Despite its ambitions, this cars faces strong competition that won’t allow it to shine as its little brother. In contrast to the good perspective in USA, China and Brazil, the Compass is not expected to post big numbers in Europe. 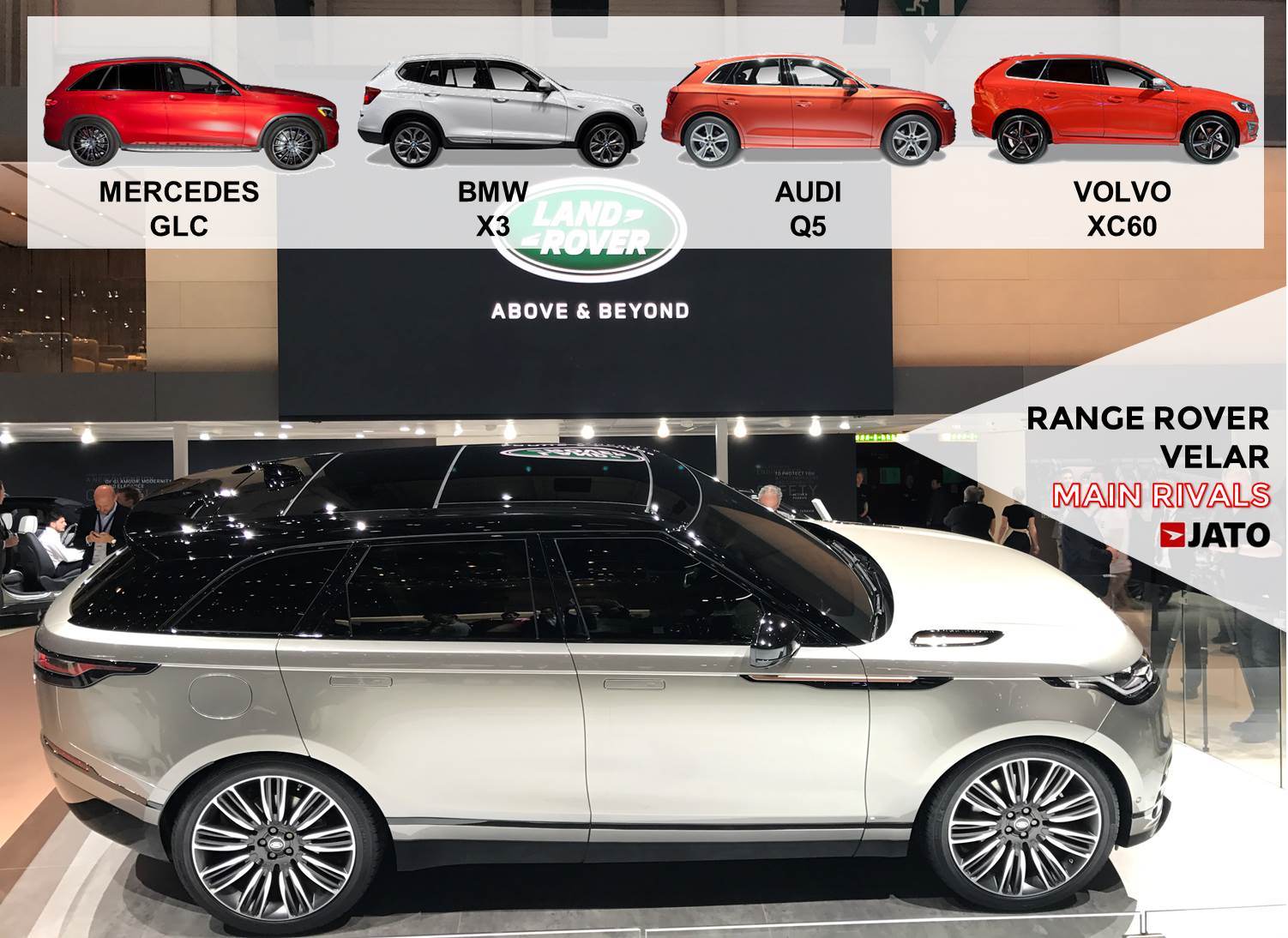 With its 4.8m length, the Velar will sit in the upper level of the premium D-SUV segment. It is expected to add sales volume to Land Rover as it won’t cannibalize with the Discovery Sport. Both of them should post similar annual sales in Europe from 2018. 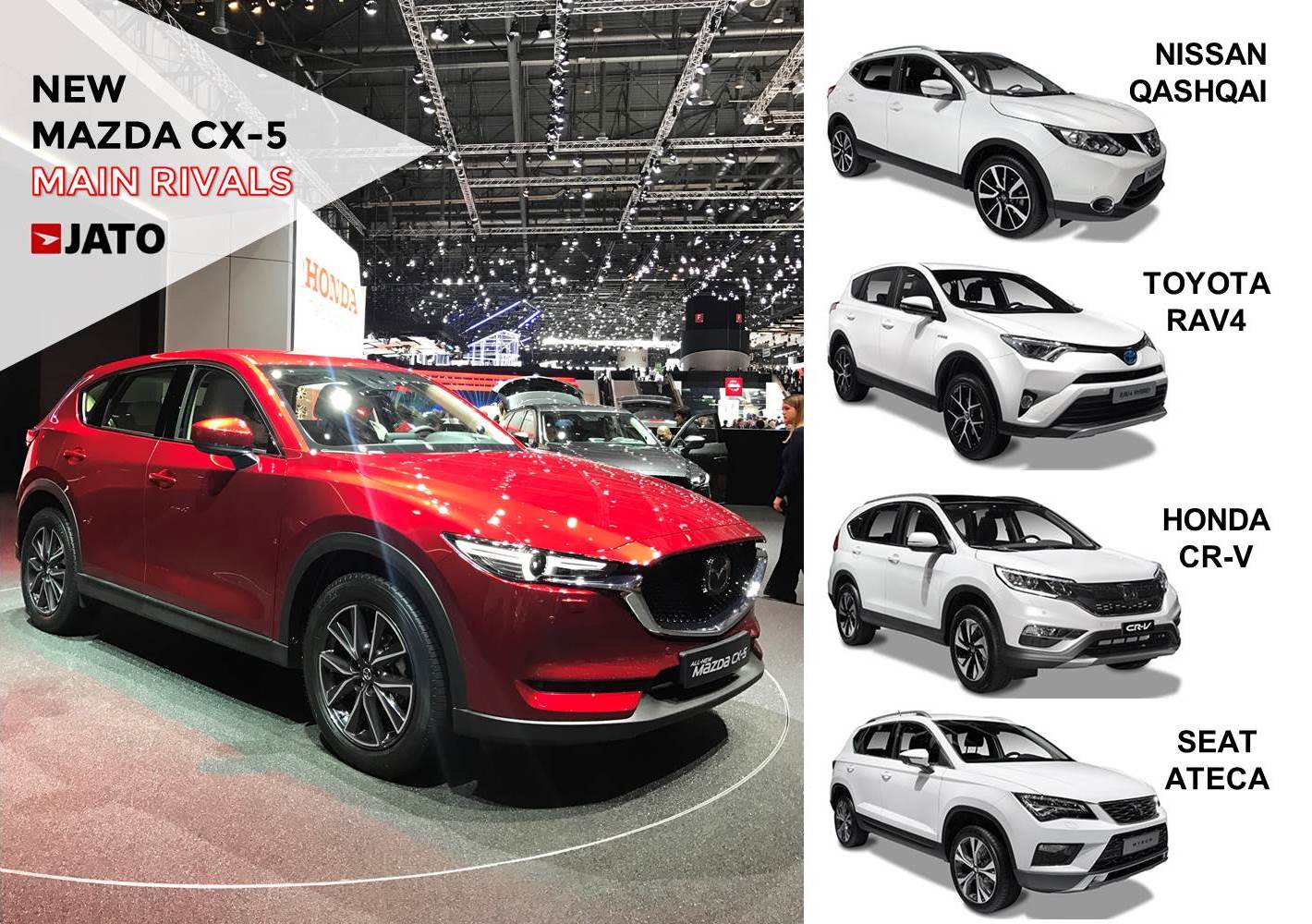 The second generation of the Mazda CX-5 becomes more stylish and elegant. Its forecast (LMC Automotive) indicates that its volumes won’t be different from the ones posted by the first generation. In fact, the CX-5 is expected to lose some positions in the ranking because of the arrival of the Peugeot 3008 and Seat Ateca. 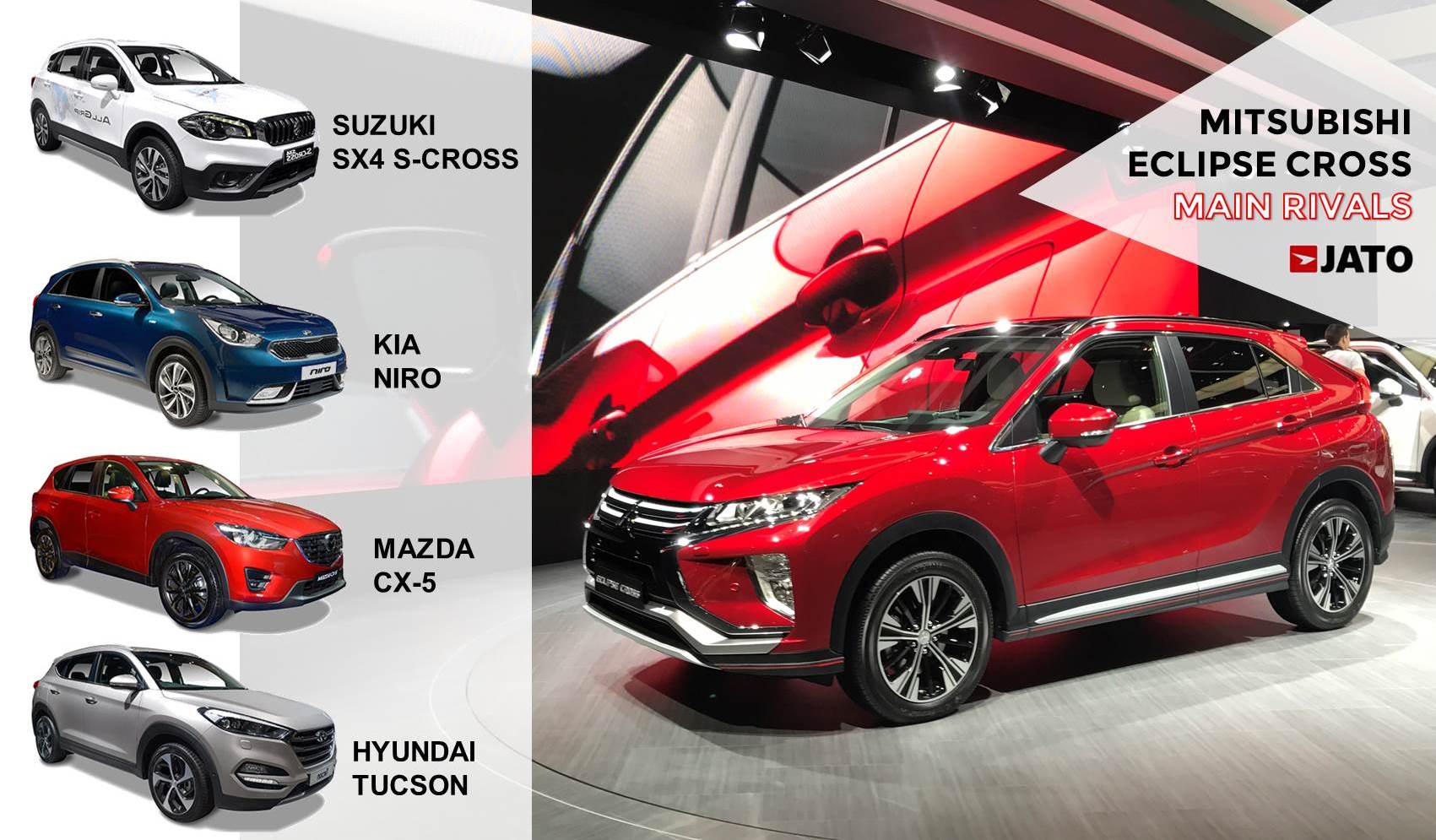 The Eclipse Cross will sit above the ASX in the same segment, the C-SUV. It will likely replicate the Outlander formula with an aggressive design and alternative powertrains that could certainly help it to find a decent place in the segment. 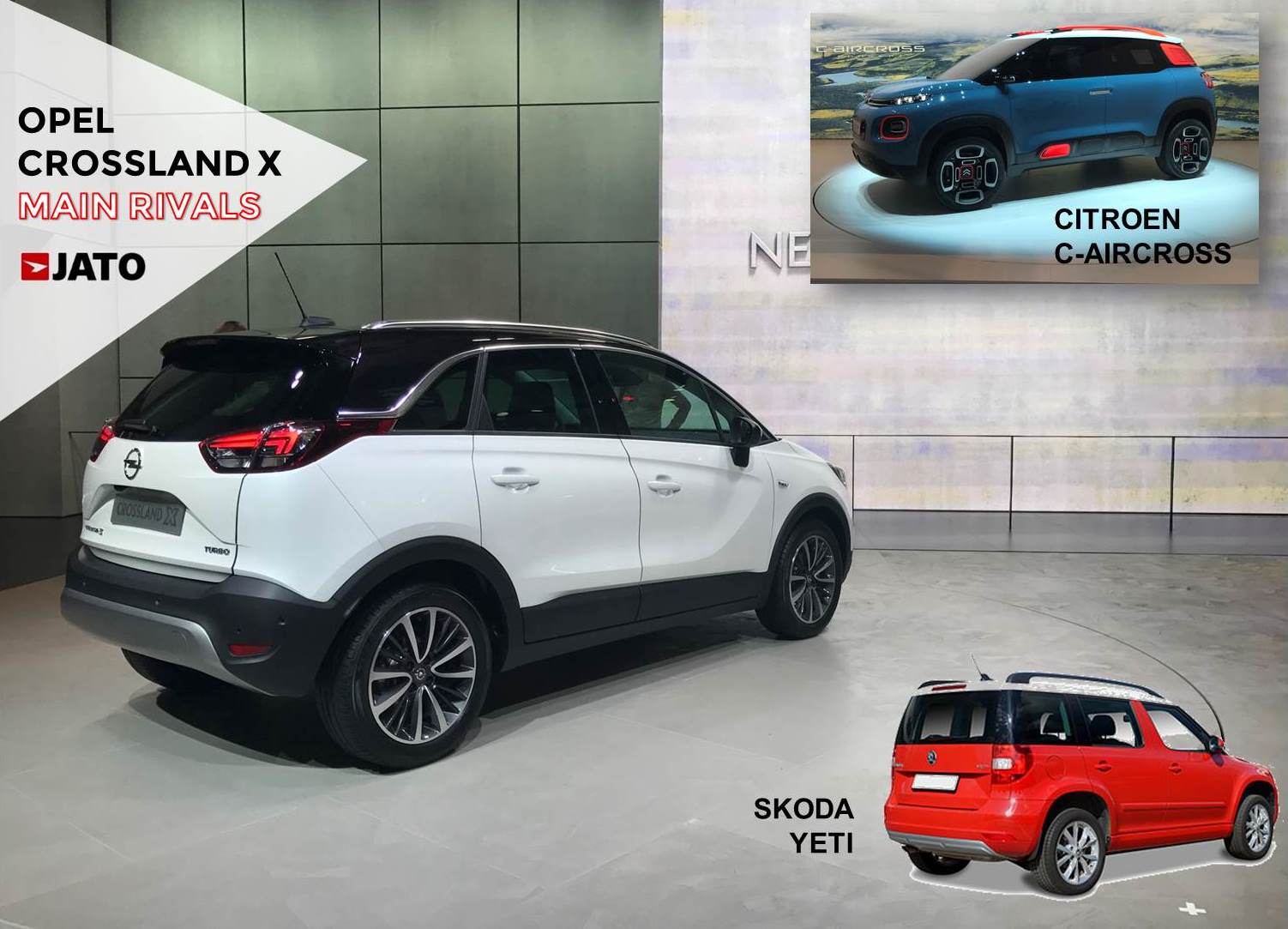 The Crossland X is nothing different than the replacement of the Meriva small MPV. As this segment keeps losing ground to the SUV boom, the brand changed its positioning giving it a new name and more SUV appealing design. It sits in the B-SUV segment, but is set to open a new category within the segment that mixes the roominess of MPVs and the aggressive design of SUVs. The Citroen C-Aircross will follow shortly. 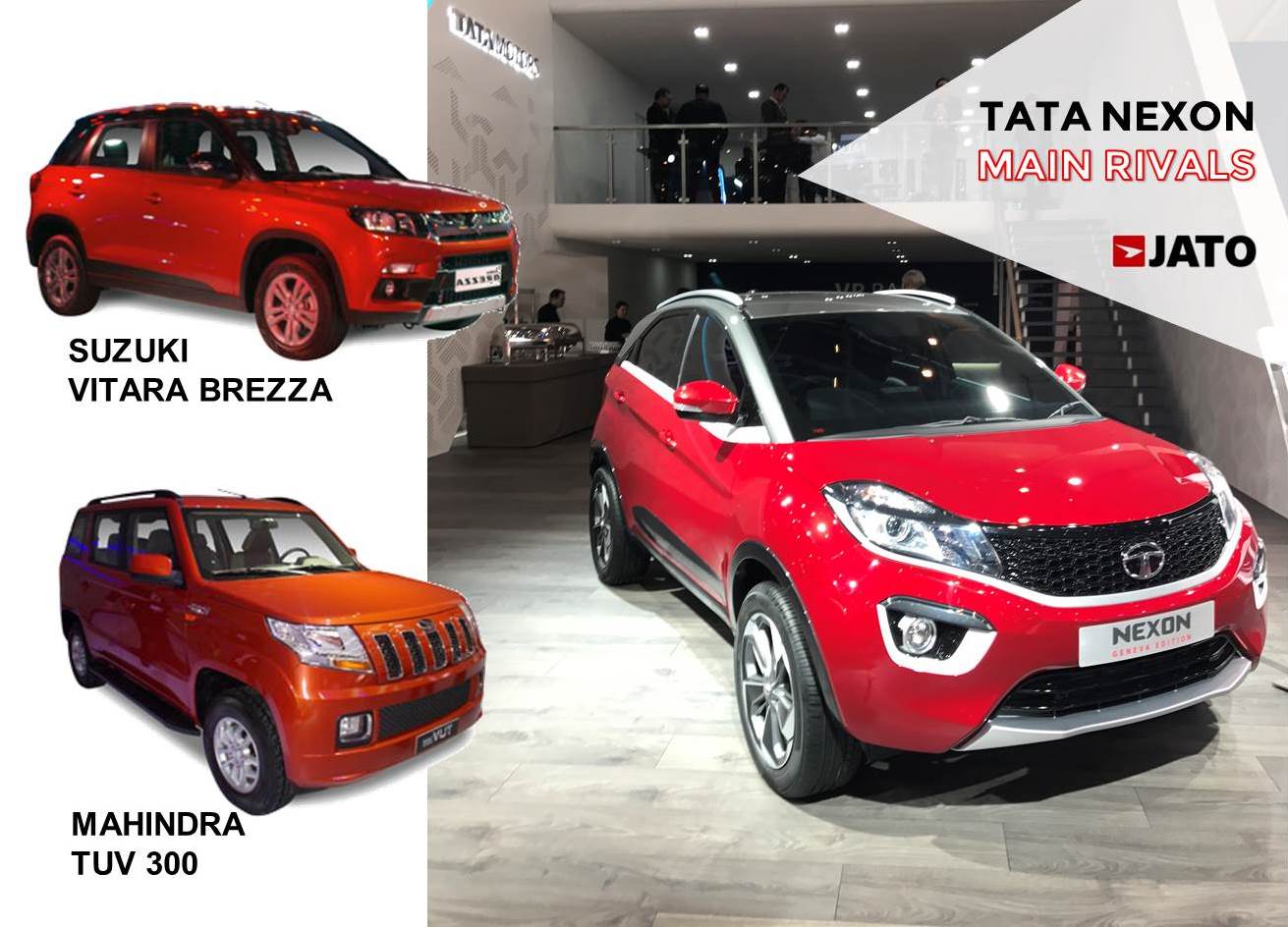 Tata is finally in the B-SUV segment with the Nexon. It will hit the Indian dealers this year. 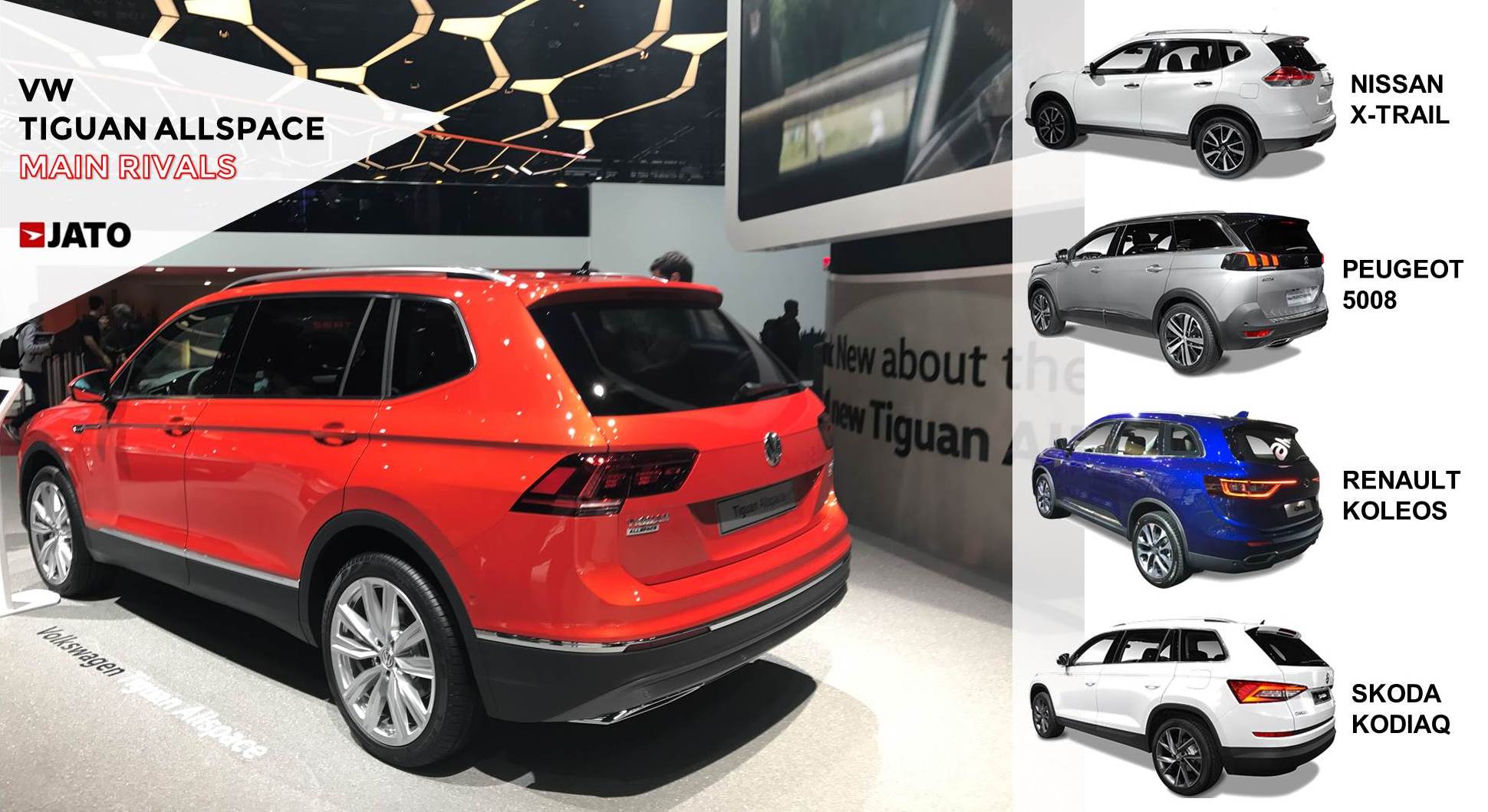 Volkswagen brand wants also a piece of the increasing mainstream midsize SUV segment. Following the same formula used by Nissan and its Qashqai-X-Trail, and Peugeot with its 3008-5008, VW uses the same name of the Tiguan to enter the D-SUV segment adding two more seats. The mainstream D-SUV segment is expected to hit the 400k units by 2020, according to our forecast partner, LMC Auto. 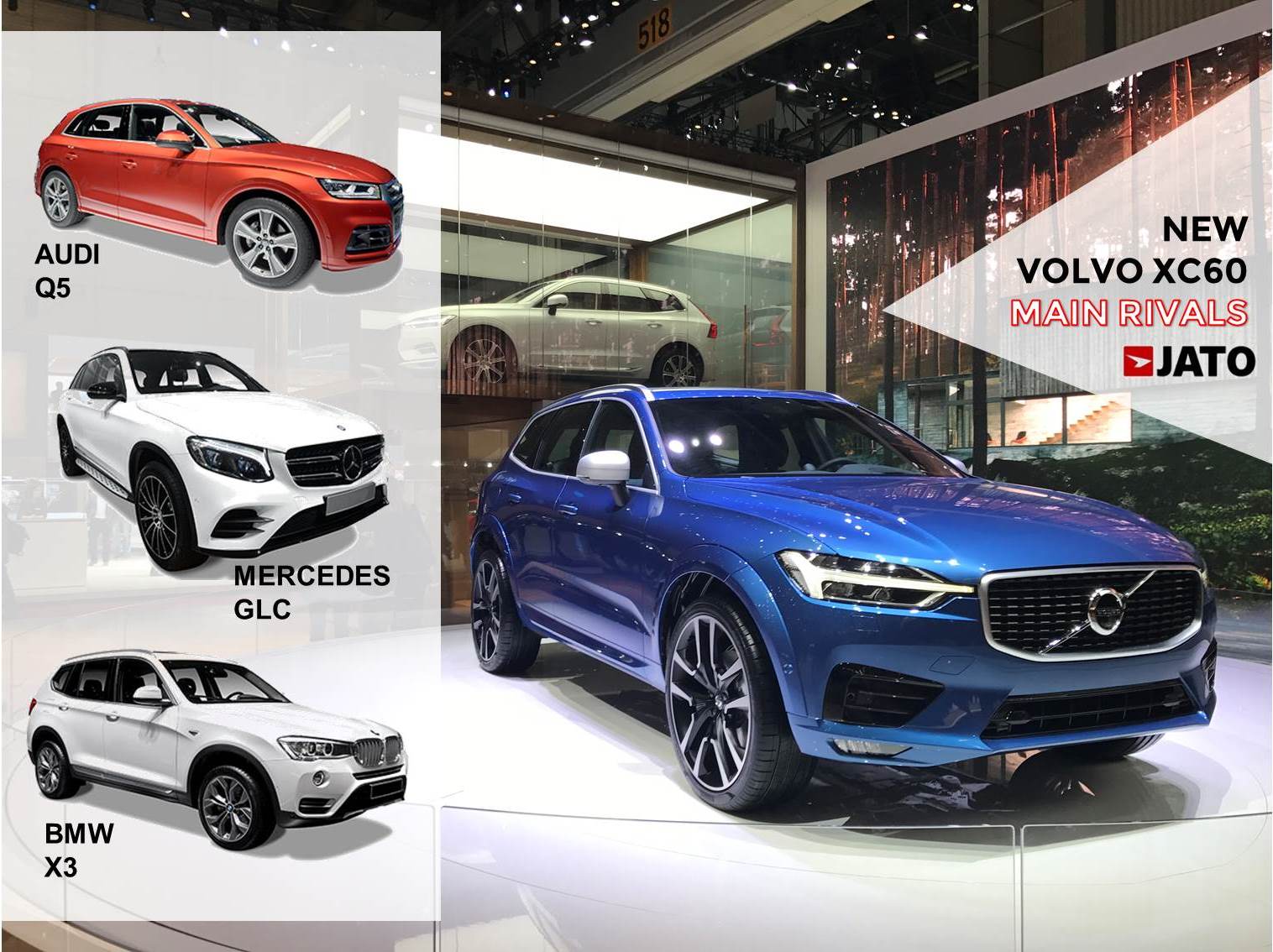 With the new generation, the Volvo XC60 is expected to continue topping the premium midsize SUV segment in Europe. The new Volvo is expected to outsell of its German rivals next year.

Meanwhile in the C-Segment, there were two new arrivals: Hyundai i30 SW and Subaru XV/Impreza. But the most exciting launches among the traditional segments took place in the midsize segment (D), with two new nameplates, VW Arteon and Kia Stinger, and one new generation, Opel Insignia. These three cars are set to change the way mainstream makers play in the traditional segments in order to better face the premium competition. 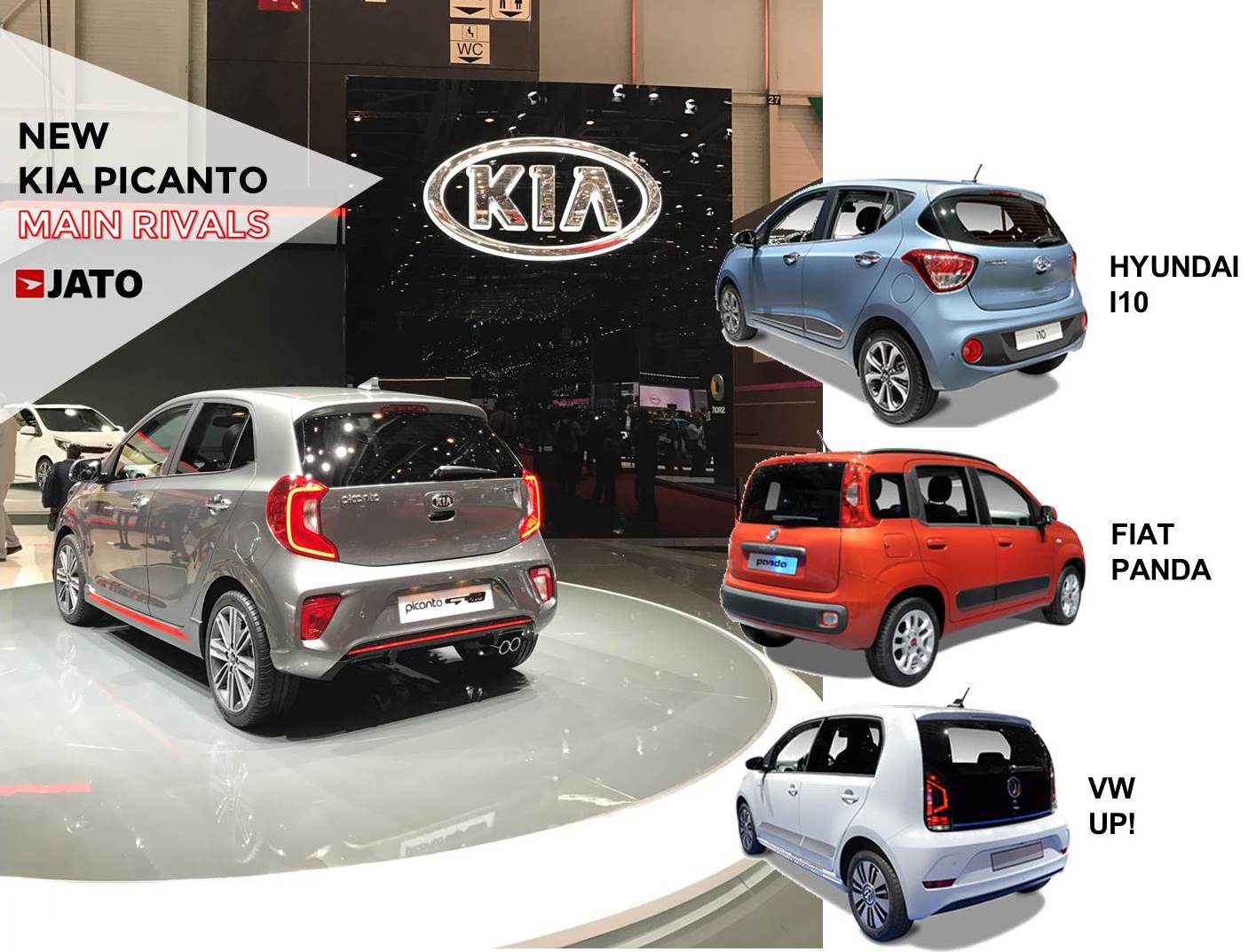 With total A-Segment registrations stable during the next 3 years, the new Kia will try to take sales away from its rivals by featuring a more serious design and bigger engines. 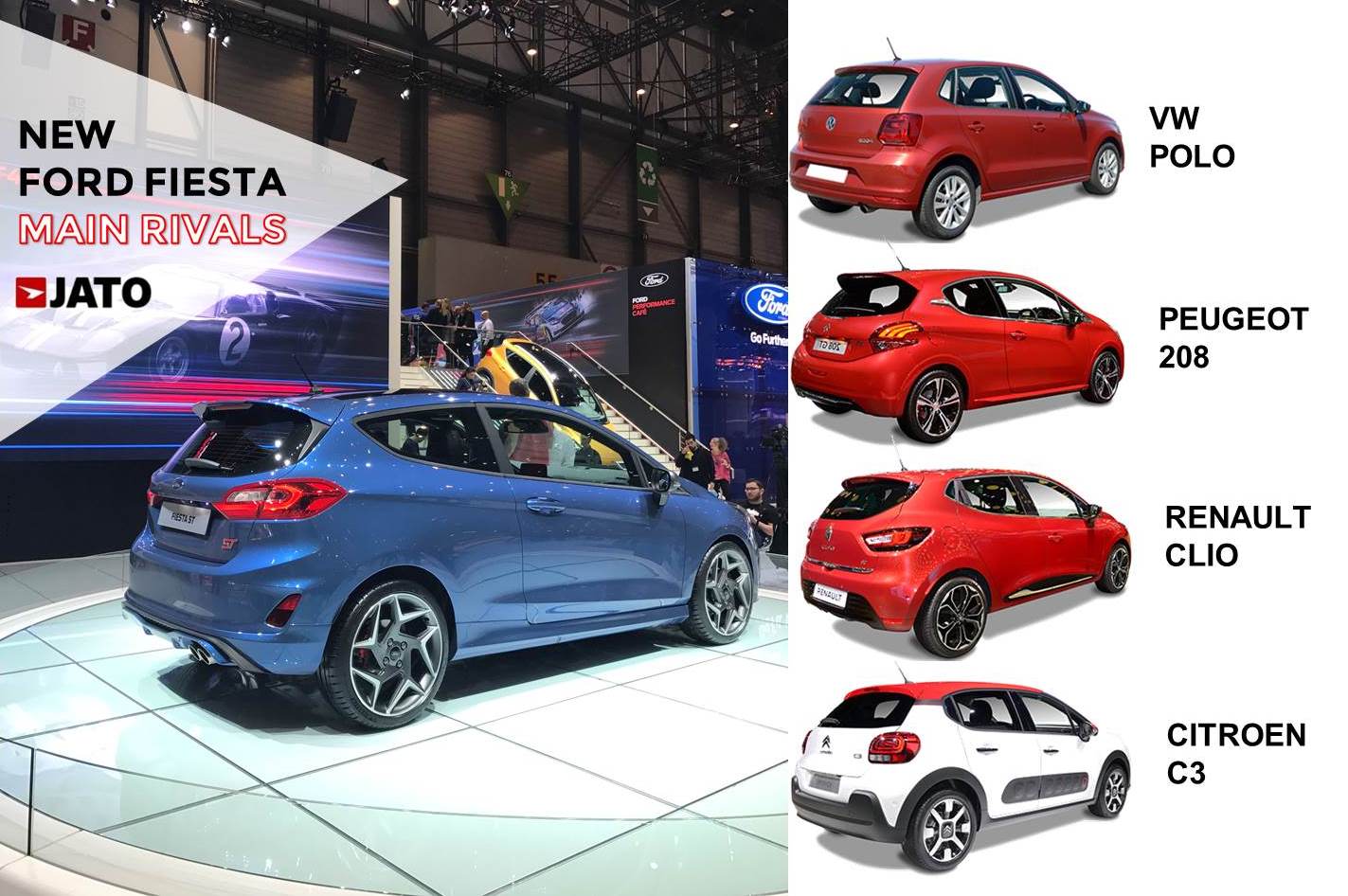 this new generation is going to continue the success of the current Fiesta leading the segment in 2018-2019. Ford’s intentions of going upscale with the new Fiesta will prove it was worth it following the trend we’ve seen in this segment. The registrations of subcompacts priced above 20,000 euro are posting higher % increases than those priced between 13k-20k euro. As it has happened in the compact segment, consumers are looking for more refined subcompacts, and the new Fiesta is just that. 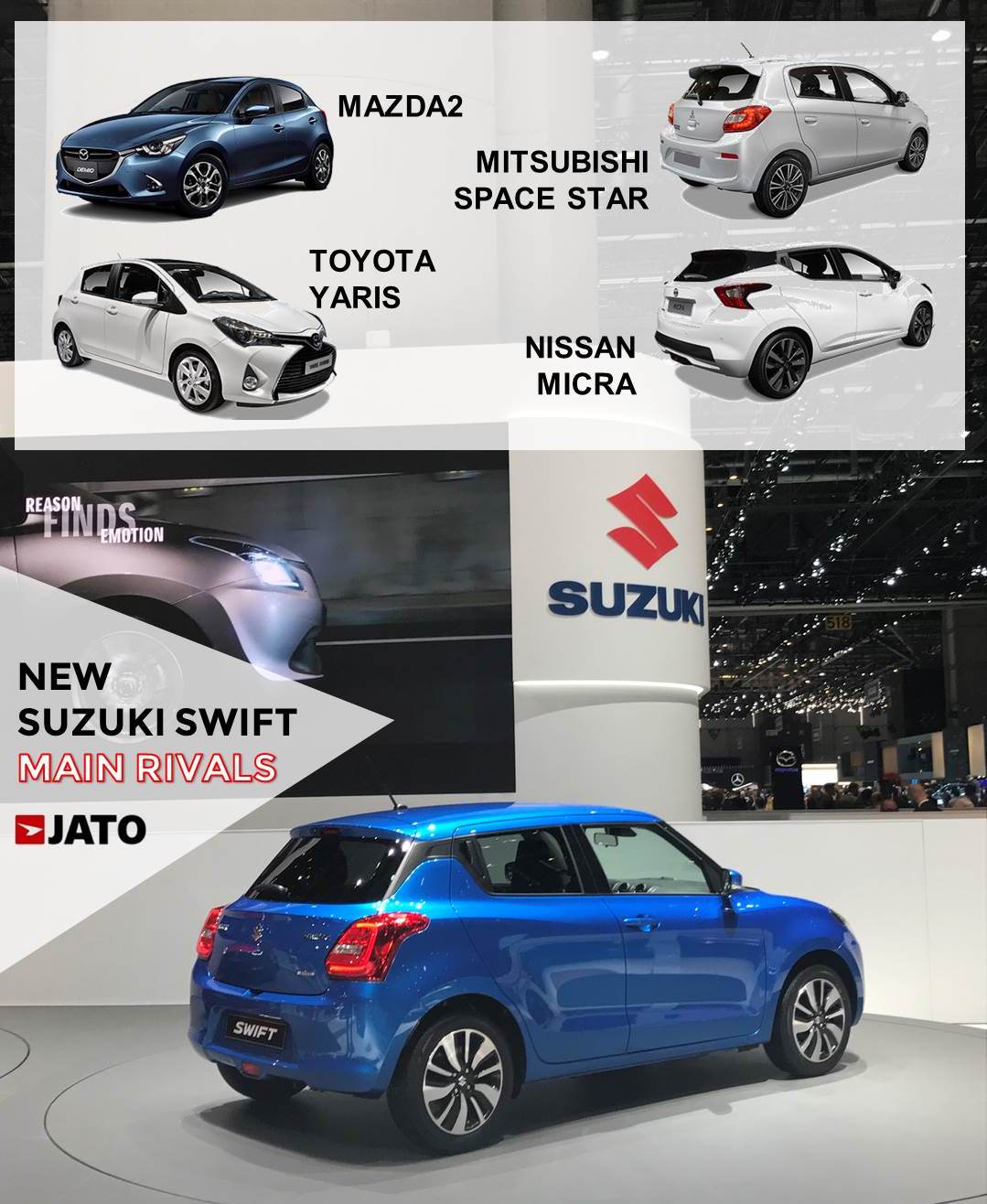 The new generation becomes more Japanese in terms of design. It will target young buyers leaving the rest of the segment to the Baleno. 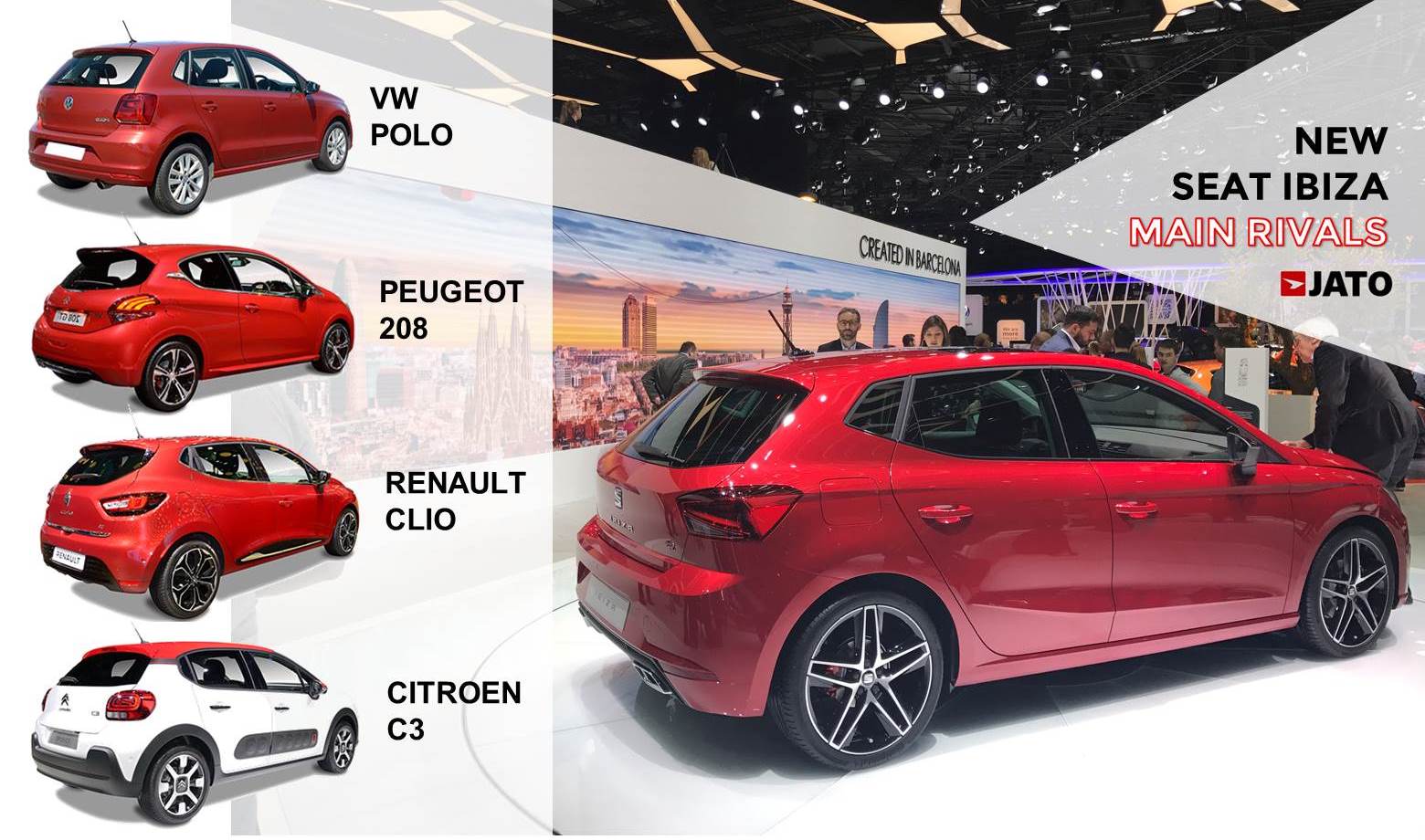 The new Ibiza improves in all senses. It will for sure keep Seat’s position in the B-Segment, even if there won’t be big increases in terms of volume. 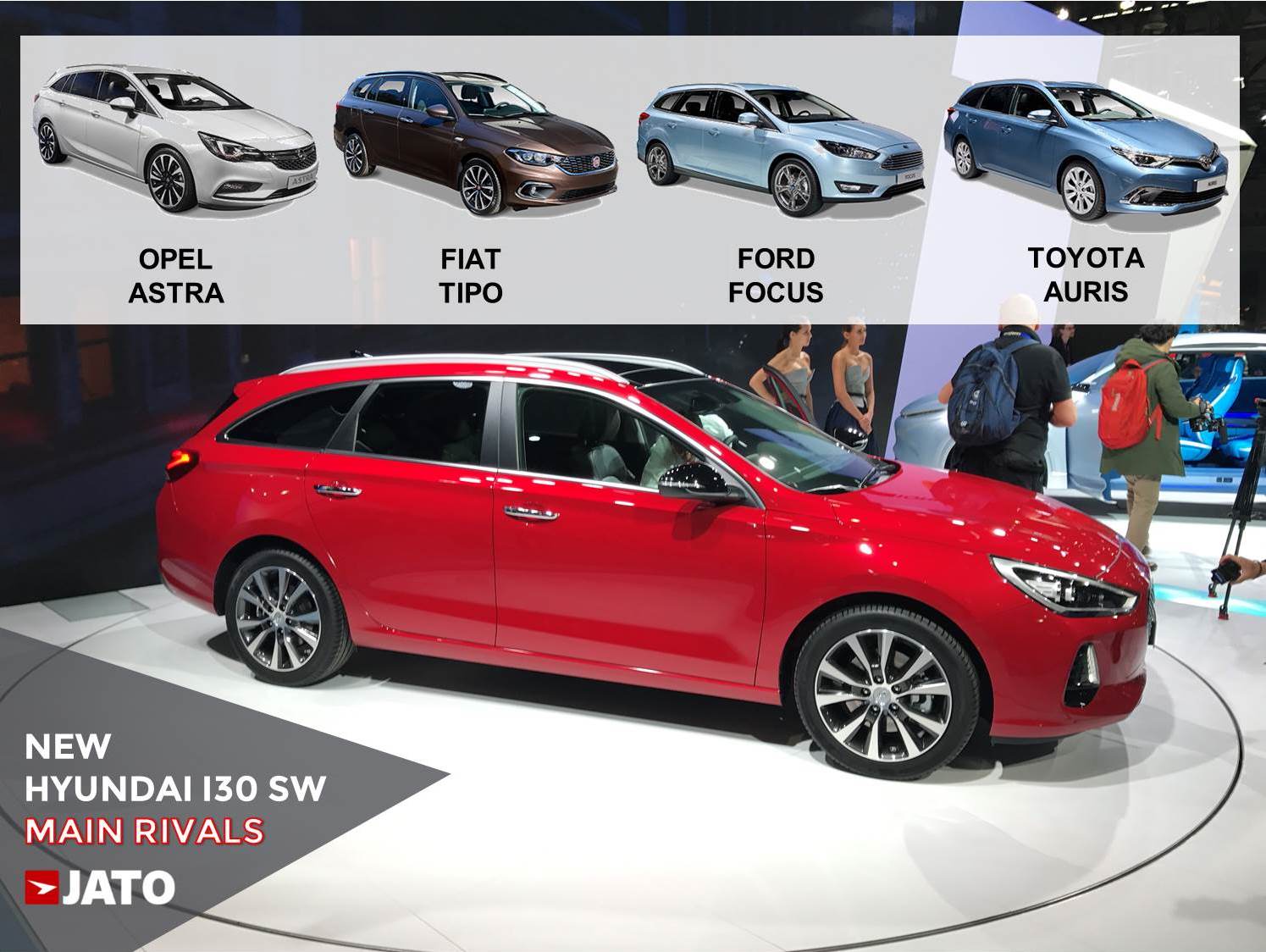 With the new generation, the i30 goes upscale in the segment. The SW version aims to compete with the Astra Tourer, Tipo SW, Focus SW, Auris SW and Kia Cee’d SW. 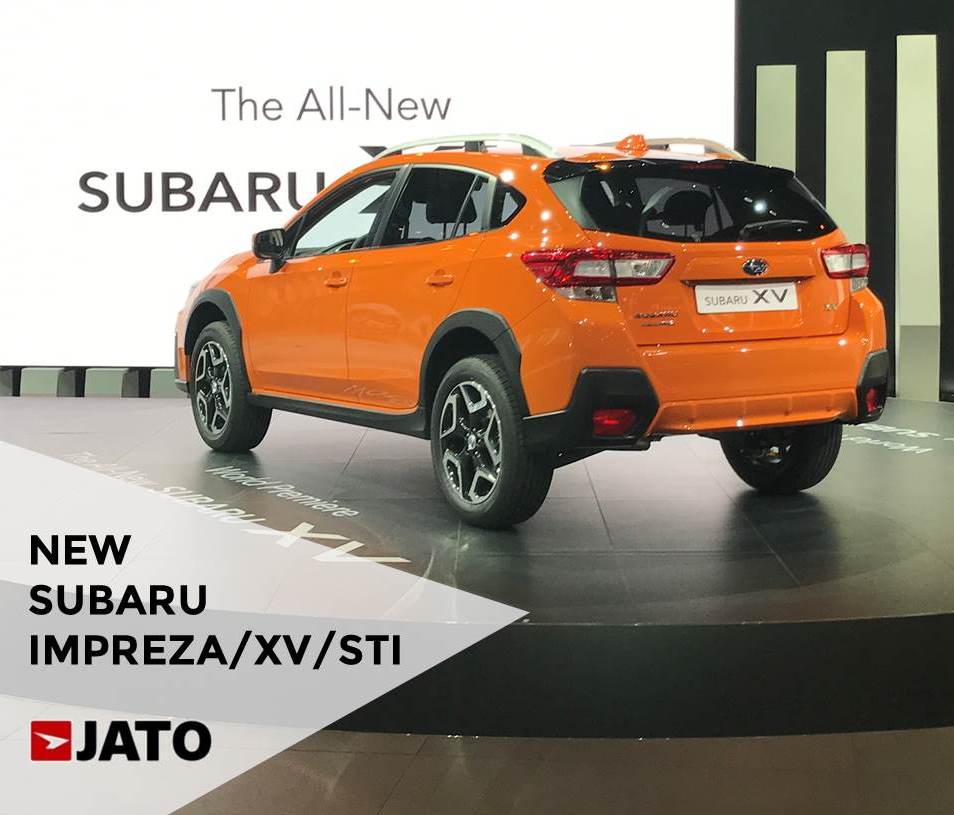 The XV is nothing more than the off-road version of the Impreza compact. The XV has no direct rivals in the segment. 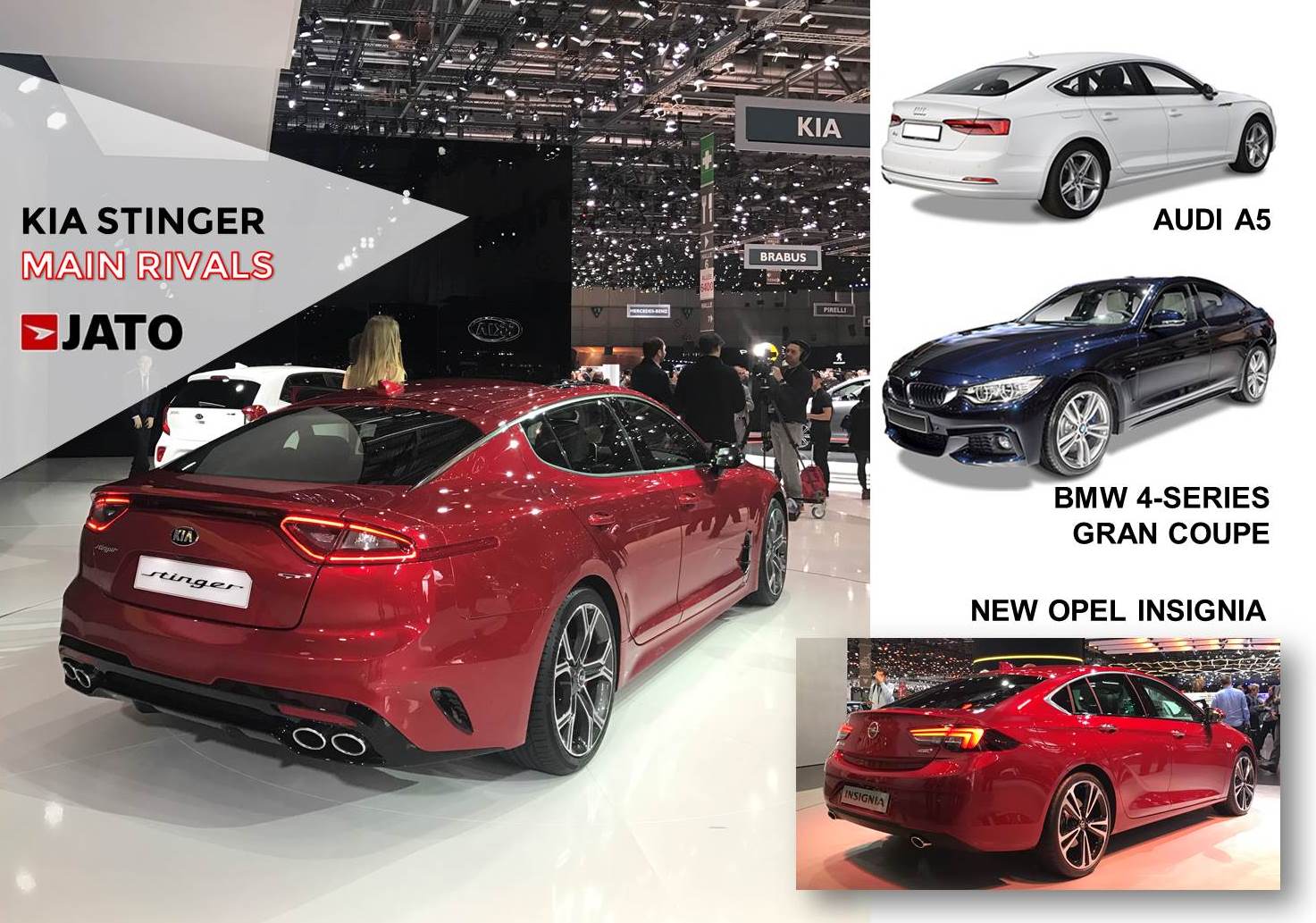 The Kia Stinger will target those consumers looking for sporty sedans, leaving the family focus to the Optima. It will have to deal with the strong premium competitors. Because of its positining and rivals, the Stinger is not expected to post big numbers. 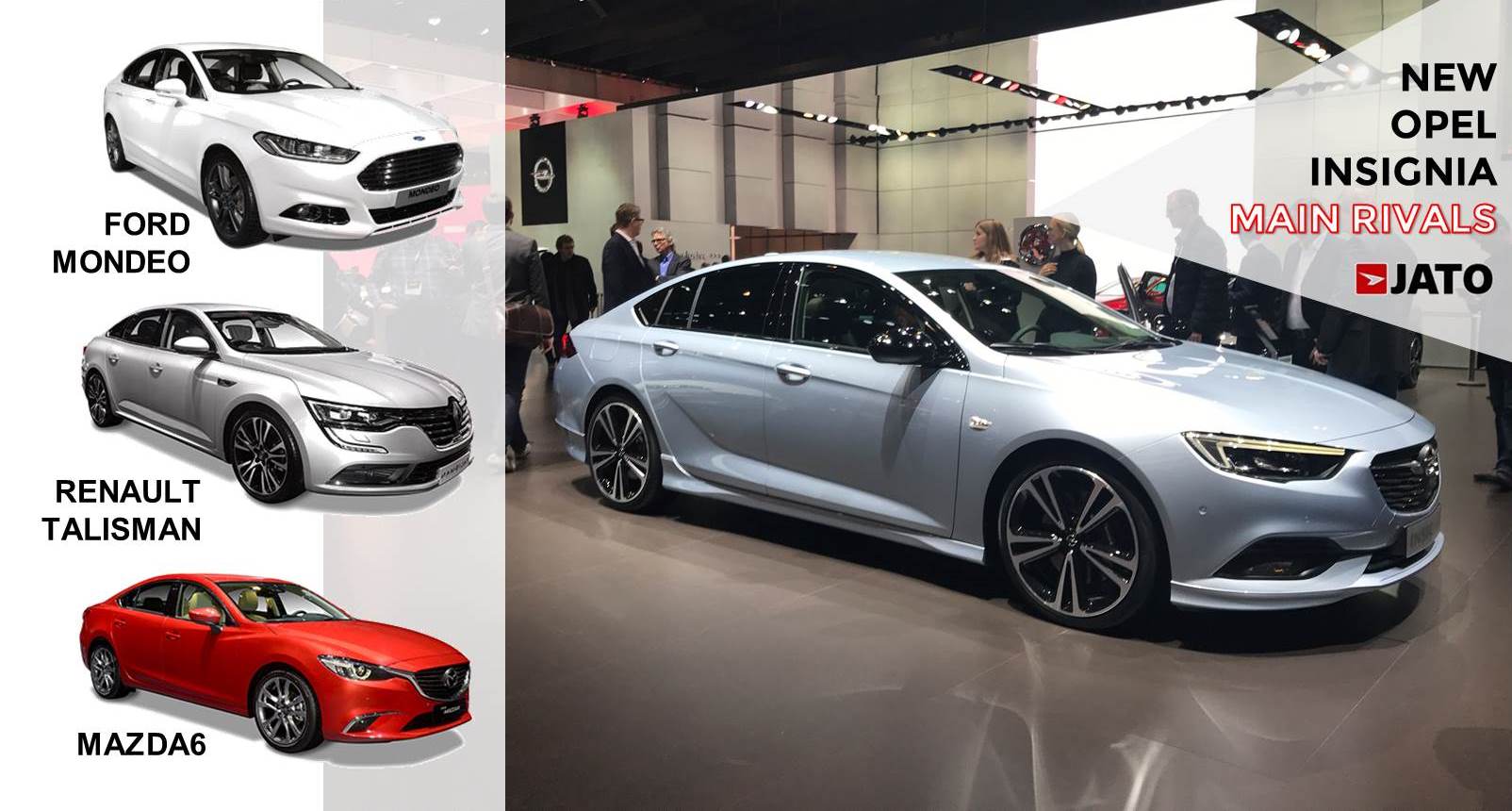 The new Opel Insignia looks sporty and more agressive. With the mainstream midsize sedans/SW demand falling, the brand aims to position the Insignia as a Sporty-Family car. It will remain as the second best-selling mainstream midsize car in Europe, behind the VW Passat. The new VW CC is called Arteon. Even if the market doesn’t show big interest for this kind of cars, VW aims to target the consumers looking for a sporty family car, leaving the big mainstream clients to the Passat. As it is not a premium choice, it is not expected to post the same sales volume as its German competitors.

Above them there were also new presentations: in the executive segment (E), BMW added the SW version to its new 5-Series, and Mercedes showed the new E-Class Coupe/Cabrio. In the F-Segment, Lexus impressed with its all-new LS sedan, and Porsche introduced the “family” version of the Panamera. Finally there were three sport cars: Renault finally revived the Alpine brand with the A110, Ferrari showed the new 812 Superfast (even if it could be considered a strong restyling of the F12 Berlinetta), and McLaren revealed the new 720S.

The Executive and Luxury 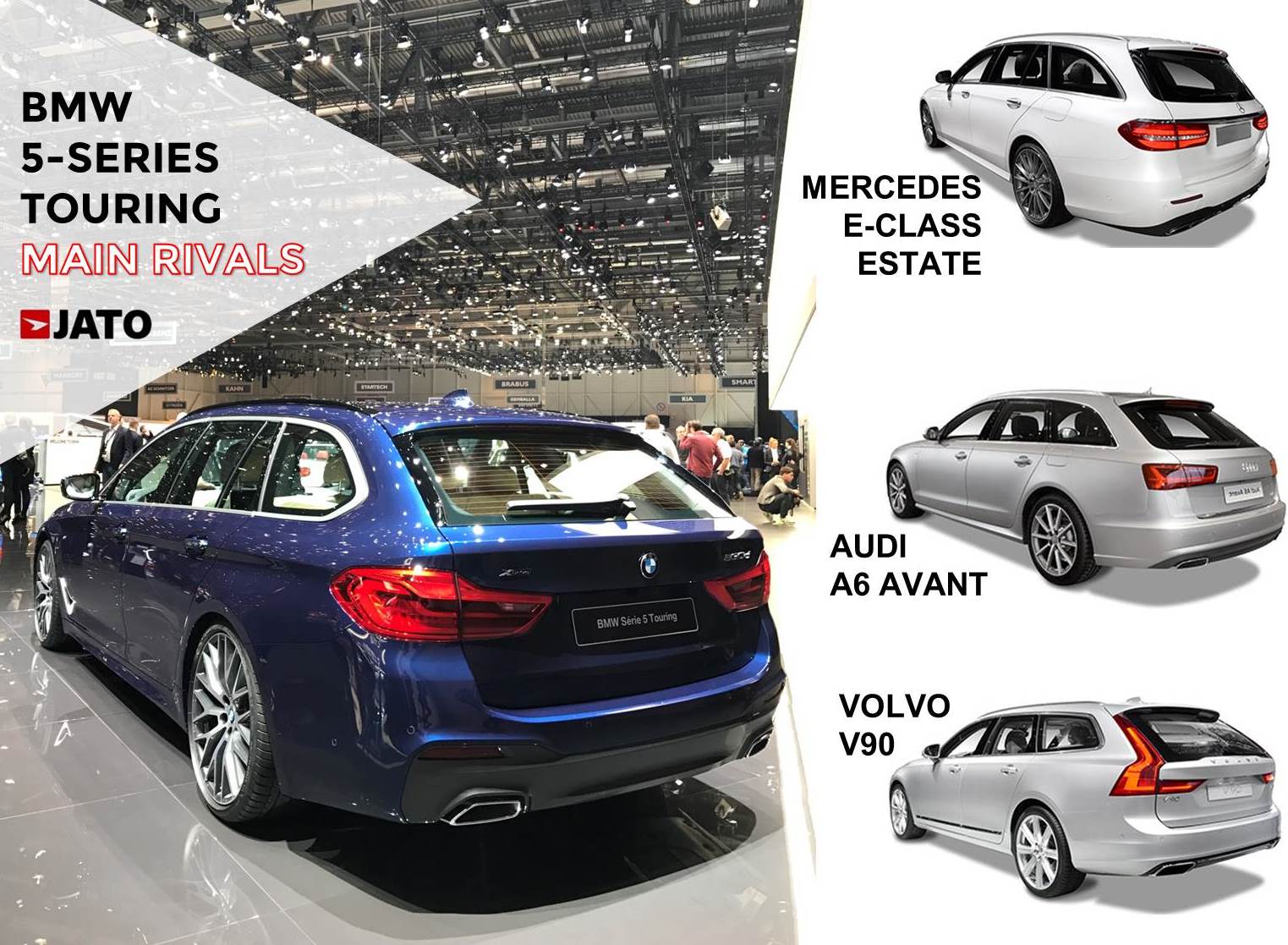 With the new generation, the 5-Series Sedan and SW will recover its leadership in Europe’s premium executive segment. The new Lexus LS is looking more for the American and Chinese customers. In Europe, the strong position of BMW and Mercedes leave very few room for non-European choices. 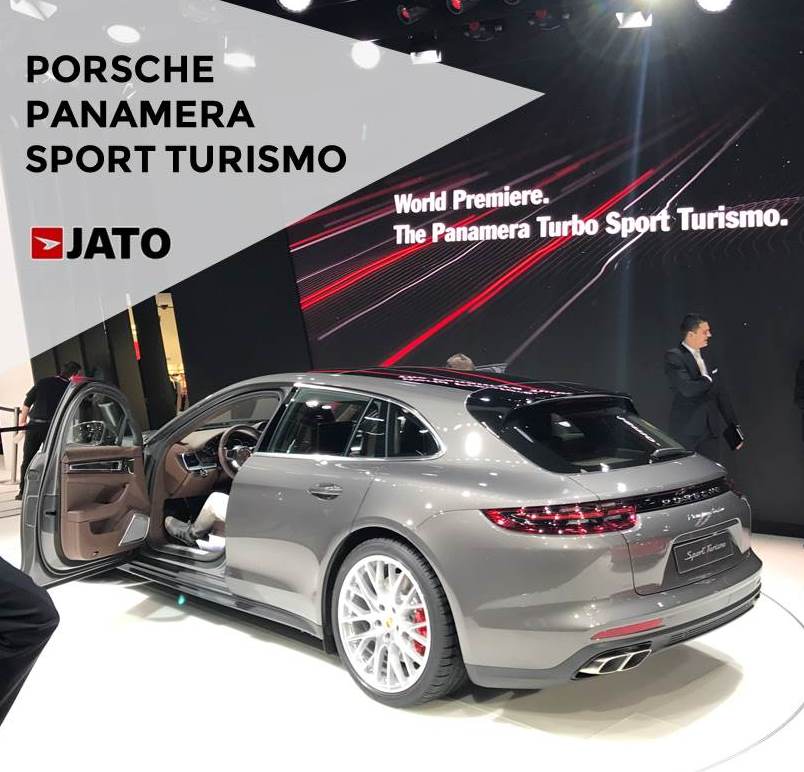 Porsche decided to add a “family” version of the Panamera. There is no other luxury family car in the segment. 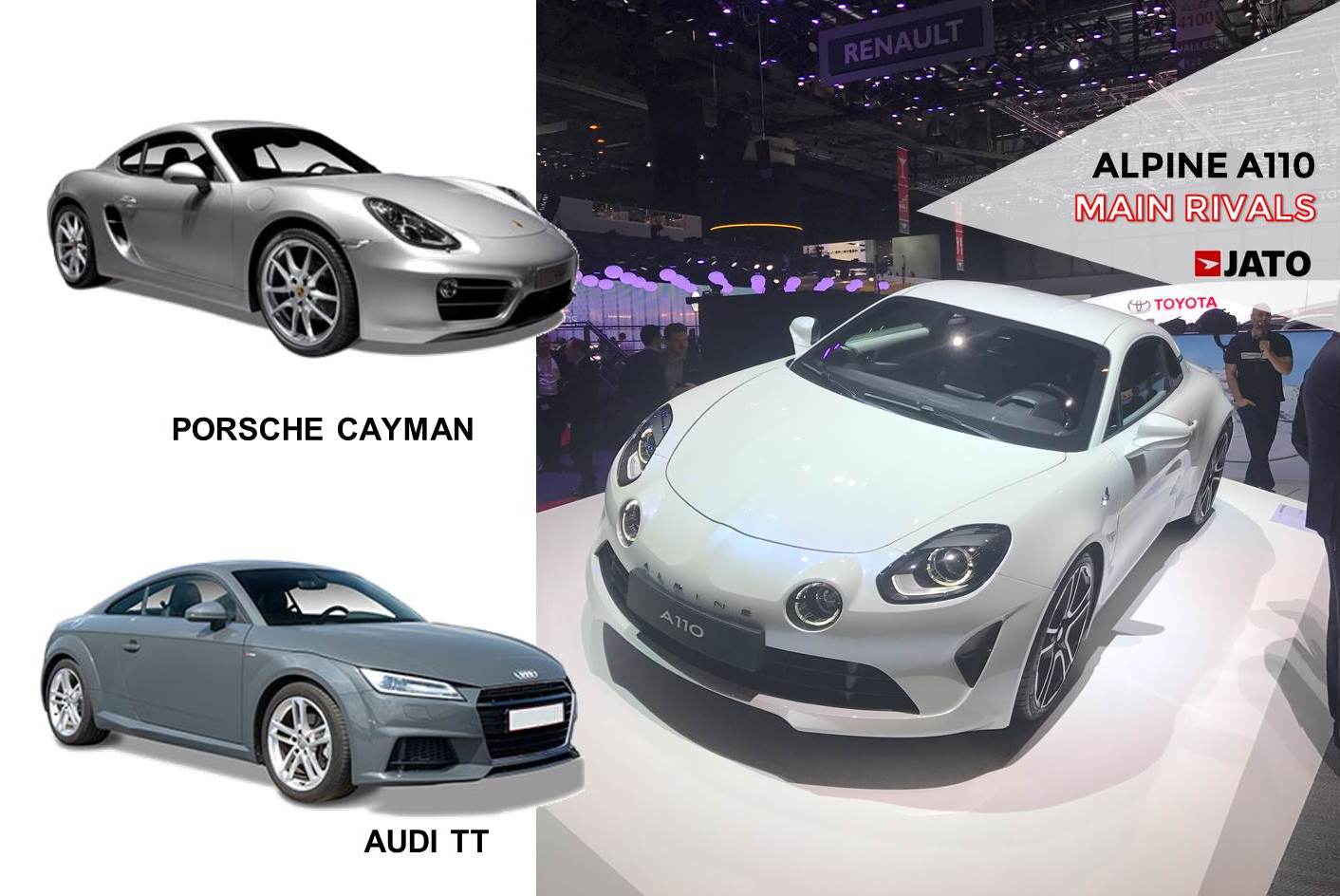 Renault points at the midsize sporty segment reviving the Alpine brand. The A110 is set to rival with the Porsche Cayman and Audi TT, in a segment not only dominated by them (they controlled 45% of the segment registrations in 2016), but showing no signs of growth.