Our latest CO2 tracking study indicates that instead of moving closer toward achieving EU targets, the automotive industry has fallen further behind, now at similar levels to those seen in 2014. The improvements made by OEMs across fuel efficiency and new technologies have been offset by the production of bigger cars, fewer diesel registrations and more SUVs on the roads.

The industry is a way off from meeting the goal outlined by the European Commission: from 2021 (phased in from 2020) the EU fleet-wide average emission target for new cars will be 95g CO2/km. In 2019, the gap between this target and the average CO2 emissions produced was 27.2 g/km –our research suggest this is very far from where the industry should be at this point in time. 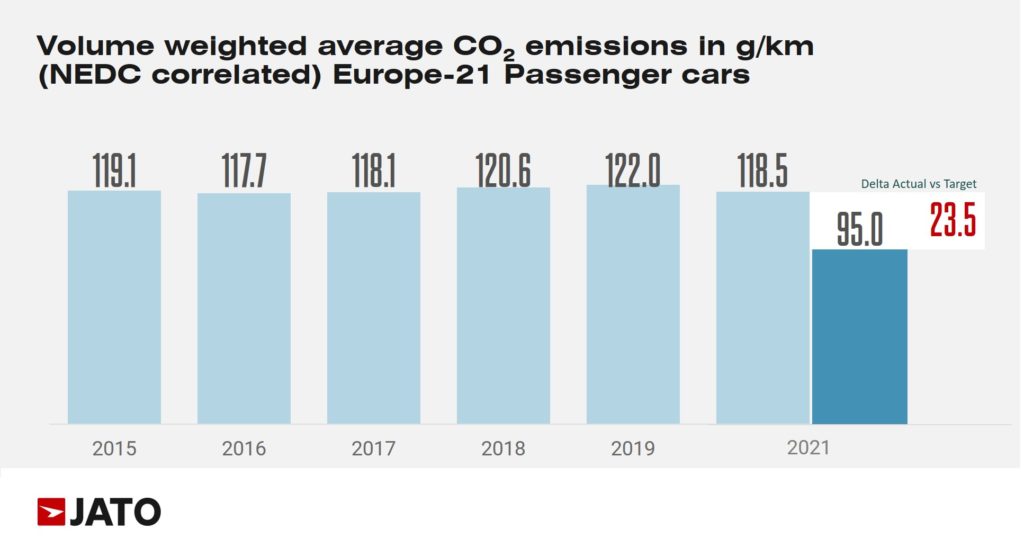 Nevertheless, there are signs of hope. Toyota, Citroen and Nissan were the best performers last year, reducing the gap between their current emissions and their targets even further.

Last year, Toyota led the ranking in and posted the best improvement in CO2 emissions compared to 2018. It has also been, the only large player to  reduce its average emissions continuously year on year. Its focus on alternative fuel vehicles has paid off, (this year) registering the smallest gap between the EU target and its own figures. 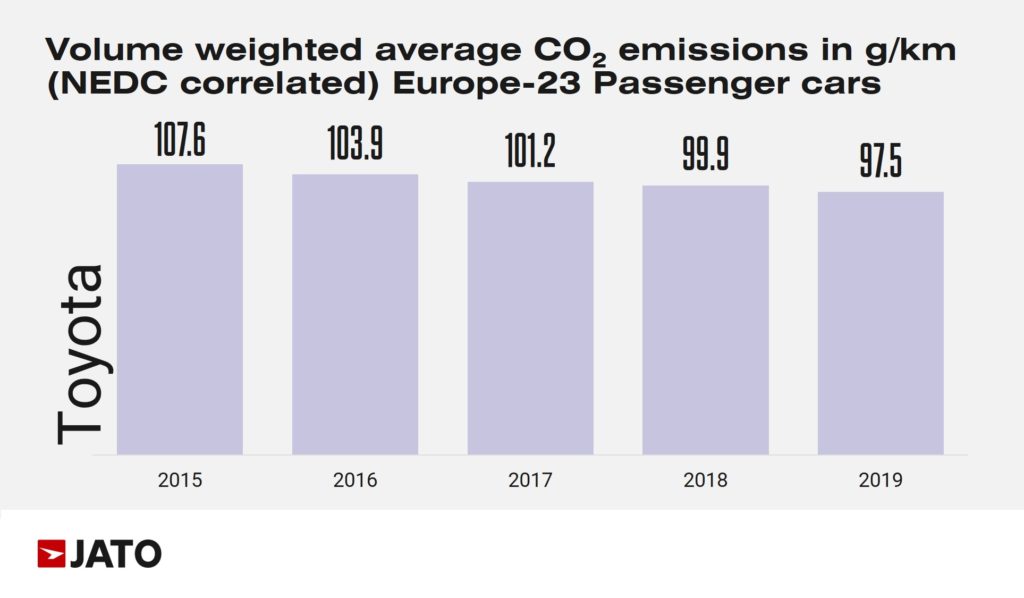 This shows a clear correlation between hybrid car registrations and a decrease in average emissions across the industry –  as average emissions for hybrid cars were 25.0 g/km lower than those of petrol cars. However, it seems that these changes won’t have a sustainable impact unless more strategies are brought in in the coming years, particularly given targets are only getting tougher for 2025 and 2030. 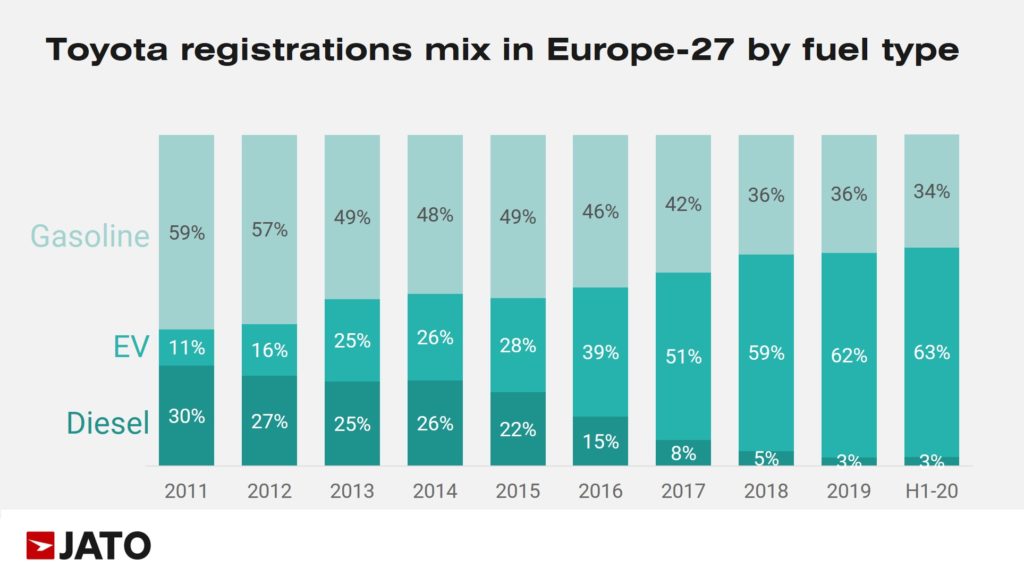 Citroen follows Toyota in the rankings and has performed well for a range of reasons. The brand has slowly abandoned its larger sedans, arriving late to the SUV boom. In 2017, its registrations were comprised of small cars (49%), compact cars (16%) and MPV/Vans (31%). Last year, its SUVs accounted for 30% of its vehicles but still the brand is not present in the upper segments or the sport-cars segments. 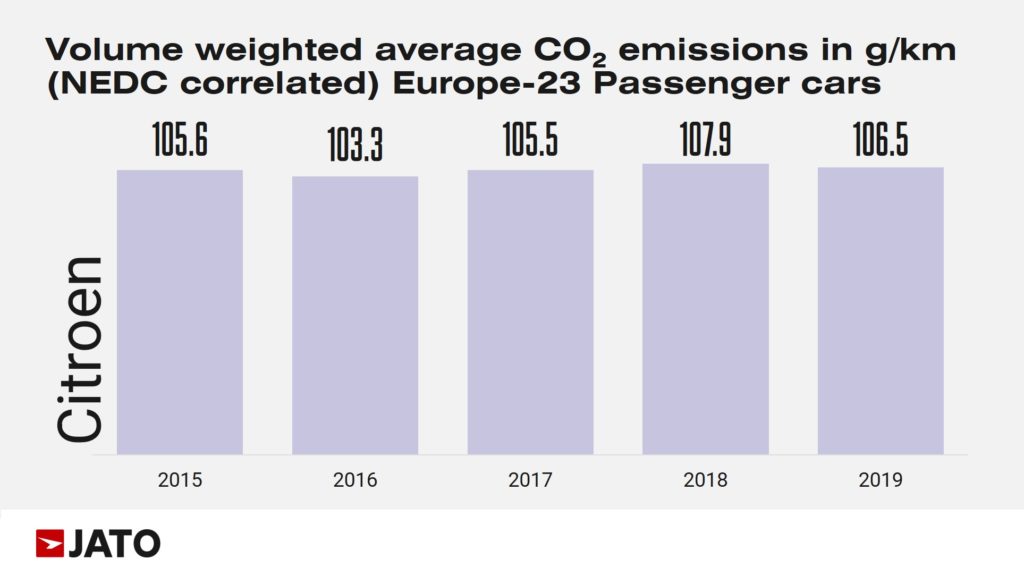 In fact, in 2019 Citroen posted one of the lowest average Kerb weight (kg) by brands in Europe. This has contributed to keeping the average emissions low since 2015 – between 105.6g/km and 106.5g/km last year. Simultaneously, electrified Citroens have not accounted for more than 0.4% of its registrations during those years, meaning automotive players can keep their emissions low by playing in lower value segments. However, once again it is likely to be unsustainable in the coming years. 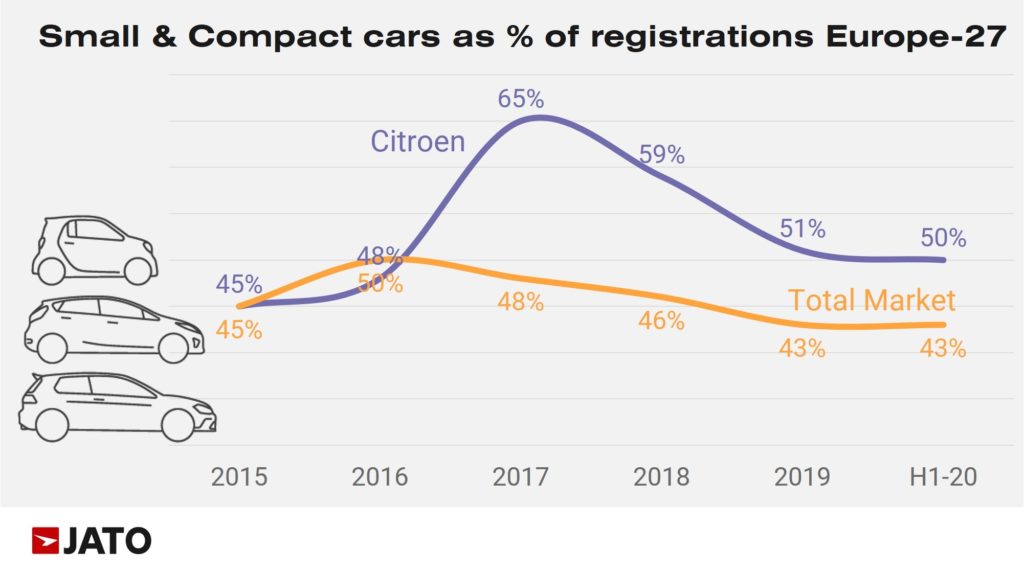 Citroen will soon make part of the new group Stellantins, and will need to transfer this good results to its new sibling brands from FCA.

Nissan has recorded higher averages than Citroen over the years, but has been able to decrease its average. The results are higher than Citroen because unlike the French maker, Nissan abandoned the upper segments and focused on SUVs. In addition, it has been selling the Leaf fully electric compact since 2011. 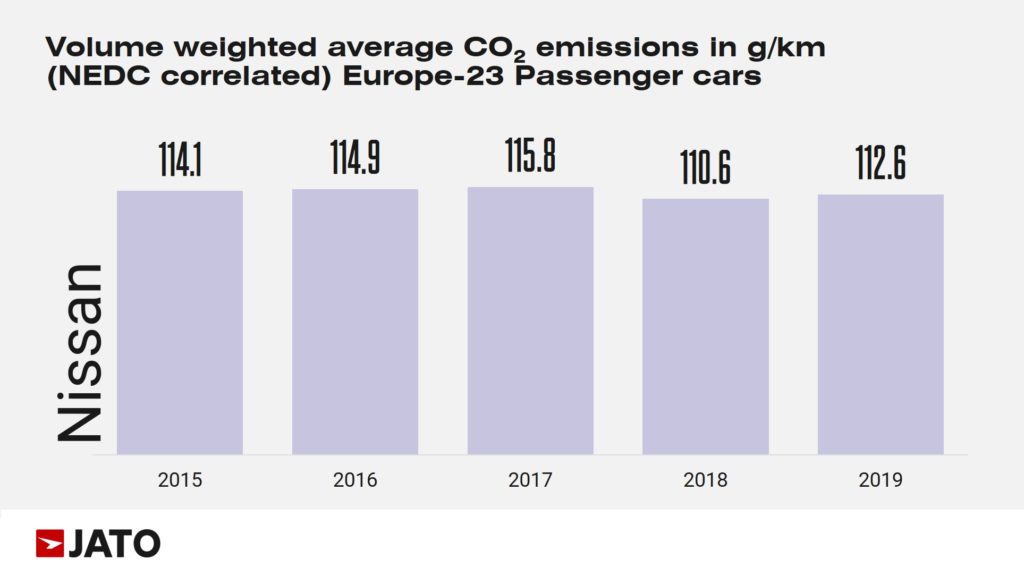 Last year electrified cars accounted for 9% of Nissan’s registrations in Europe, however none of them were SUVs, which accounted for 72% of its volume. In the case of Nissan, the “SUVification” of its line-up is moving faster than its electrification. Consequently, the emissions consistently remain above 110 g/km. 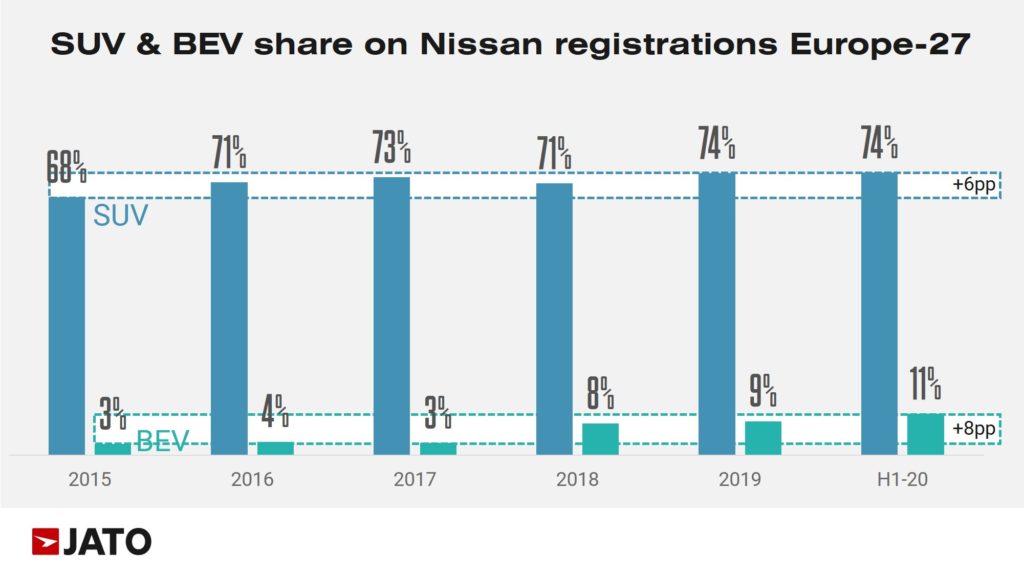 Among the premium brands, BMW has seen the most stable performance for CO2 emissions. BMW were faster in the adoption of alternative fuel engines than Mercedes and Audi, which has paid off, but also been offset by the increasing popularity of its SUVs (accounting for 39% of its registrations). However, its exposure to SUVs is not as high as Volvo. 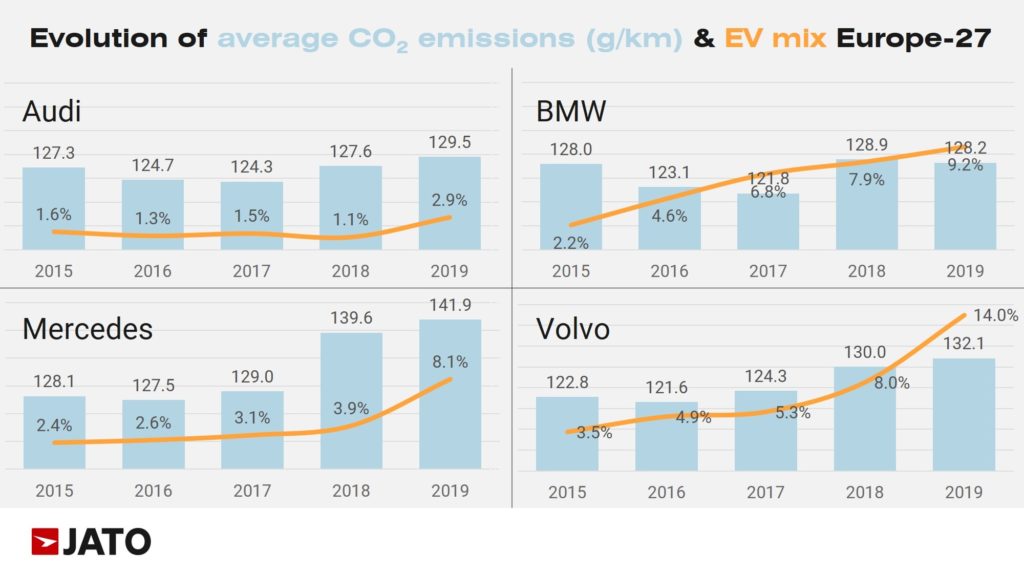 Mitsubishi was able to increase its registrations and at the same time reduce their average emissions. They focused on small cars (regs +9%) and in electrified vehicles (demand soared by 45%). Mitsubishi is a unique case, because it has based its strategy on an electrified SUV – the Outlander PHEV – meaning it plays in a popular segment, but with a clean technology. Mitsubishi was the fourth brand with the highest EV penetration behind Lexus (96% of its regs were EV), Toyota (62%) and Land Rover (28%) in 2019. 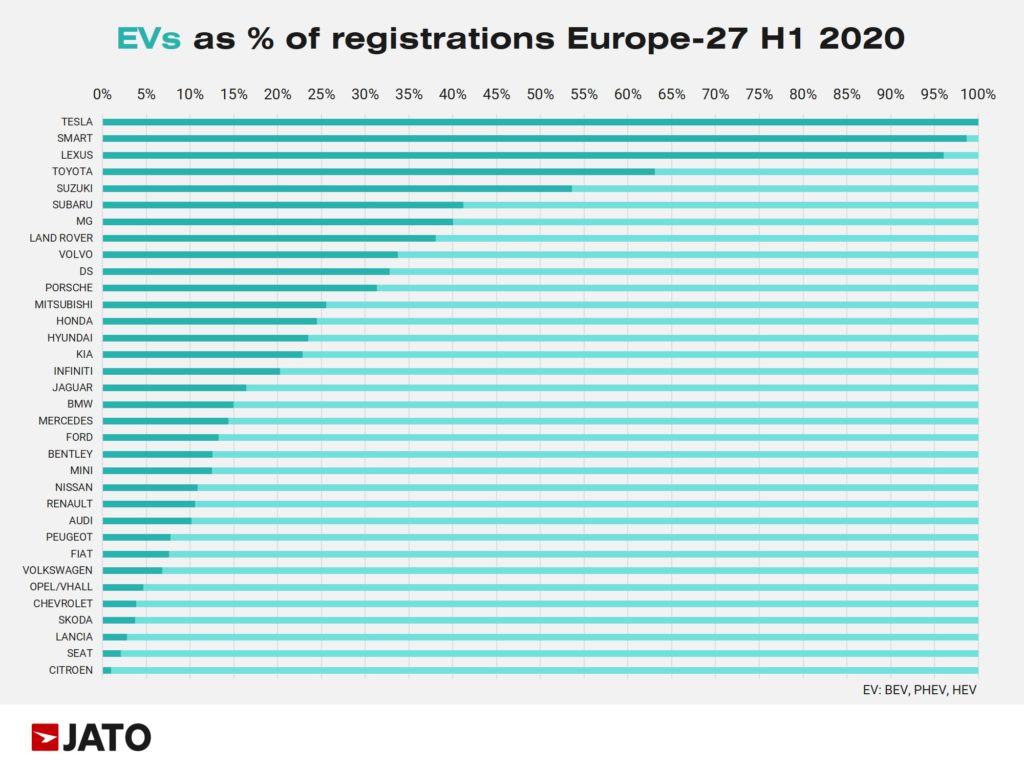 Lexus decreased its average emissions by 5.0 g/km in 2019, the best performance excluding the slow selling brands, such as Cadillac, MG and Morgan. Although it sells larger cars (the average kerb weight is 1,702 kg) and is considered a premium brand, its emissions are similar to those of mainstream brands such as Nissan or Skoda and are lower than those of more frugal brands such as Seat, Mini or Suzuki. Their success stems from hybrid engines, which accounted for 96% of its registrations in 2019. The brand was also able to reduce emissions from 2018, due to the introduction of the UX, a compact SUV.

MG, the British brand made in China, is also among the best performers for 2019. Thanks to the introduction of the electric MG ZS (a small SUV), they were able to improve emissions considerably, falling from 131.7g/km in 2018 to 123.1g/km in 2019. In fact, the new MG ZS EV helped the brand expand its European business outside of the UK, arriving to the Netherlands, where it registered almost 1,100 units. However, the UK still represented 92% of its European volume. 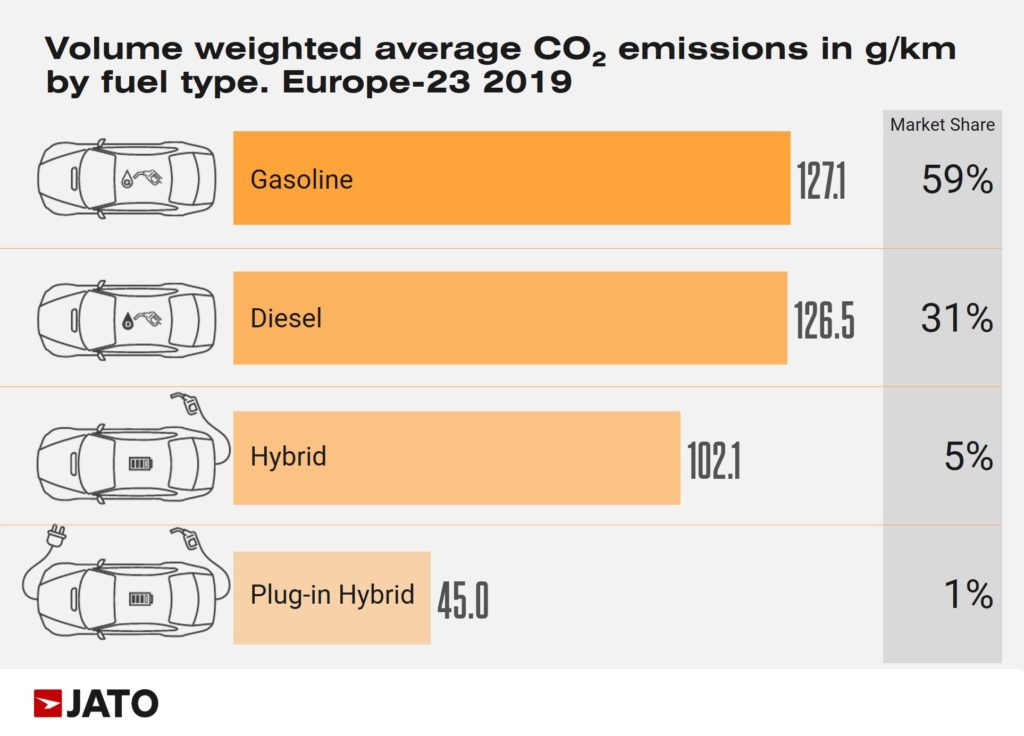 How did they reduce emissions?

The common factor among the brands improving emissions levels in 2019 is that they focused on one or a mix of the following strategies:

Brands working on these strategies will be able to move closer to the difficult targets ahead. However, hybridisation won’t be enough in the long-term and more zero emissions cars are needed in order to notable reduce emissions levels. Most of the improvements seen in 2019 were made by brands whose sales recorded the highest increase of EV registrations, with only a few exceptions.