Volkswagen led the European BEV market in October with the ID.3 and ID.4

In October, the European new car market grew by 14% registering 903,533 new vehicles. This marks the third consecutive month of growth in 2022 when compared with last year. Felipe Munoz, Global Analyst at JATO Dynamics, commented: “In October 2021, the market was facing the worst of the semiconductor crisis, but one year on, it has understood the challenge and is learning to deal with it”.

Positive results seen in August, September, and October have not however been enough to offset the losses felt during the first seven months of the year. The year-to-date volume in this period totalled 9.09 million units, down by 8%. When the pandemic hit European market during January and October in 2020, volume totalled 9.67 million units.

Munoz added: “The impact of the shortage of new cars at dealerships, alongside economic and geopolitical uncertainty, have been more damaging to sales volumes than the lockdowns of 2020. As OEMs adapt to this new reality, consumers are also understanding that they face longer waiting times than they used to for new cars.”

October was a record month for MG as the Chinese manufacturer registered more than 12,000 new vehicles. In the same month last year, volume totalled 4,800 units, and just over 2,900 units in 2020. Munoz continued: “This success is explained by introduction of more appealing products, particularly their electrified range, at competitive prices. MG is proving that with the right offering, Chinese manufacturers can succeed in Europe.” 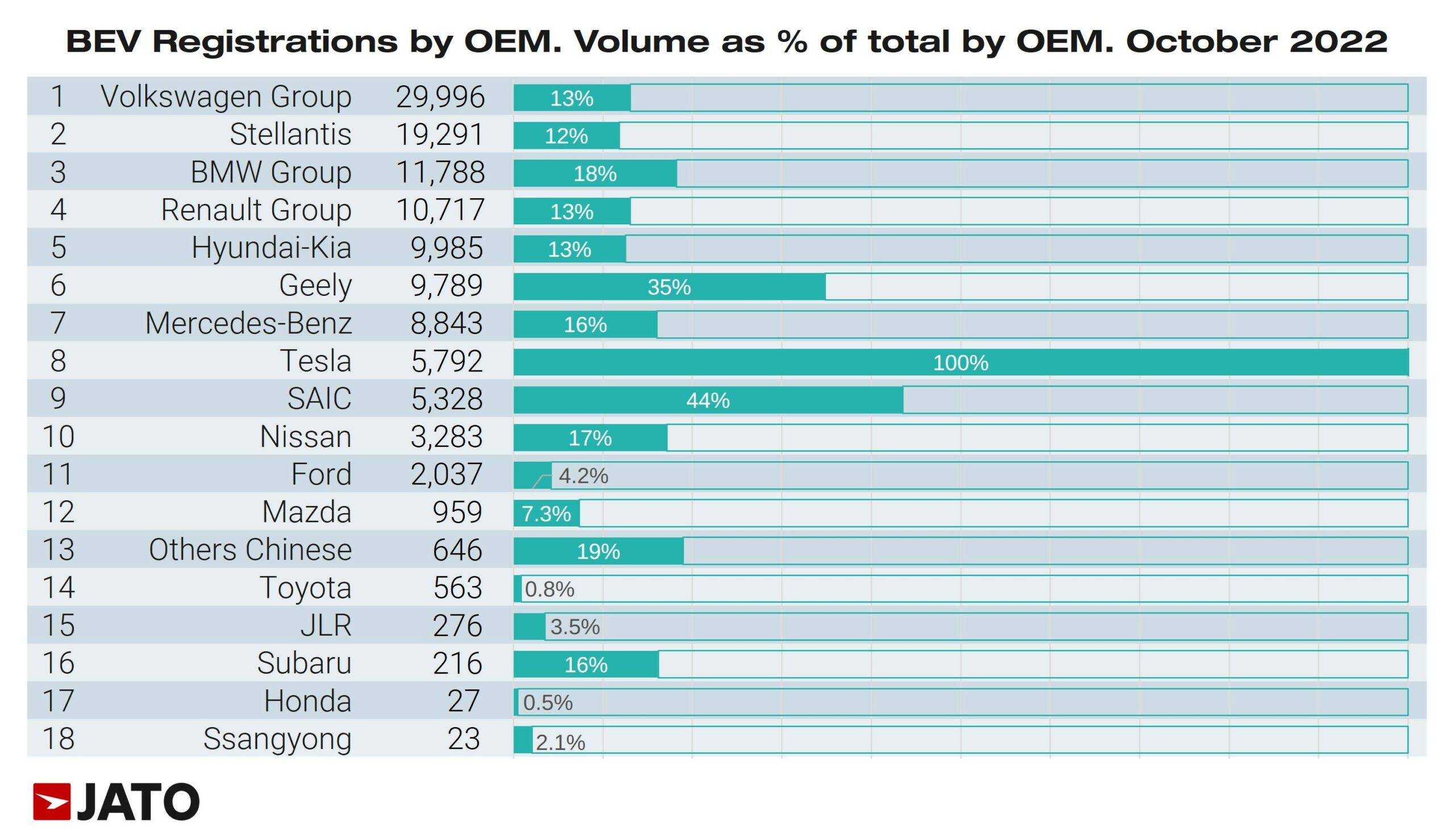 Volkswagen brand led the market in October with a 12.7% market share – this figure rises to 25% with the inclusion of other the brands under the Volkswagen Group umbrella. Renault followed thanks to the success of the Megane E-Tech, while demand for the Zoe declined. BMW’s volume soared by 111%, with growth driven by the i4 and iX, making it the third most popular EV brand with a 7.1% market share.

The Peugeot 208 is back at the top

Despite losing momentum in recent months, the Peugeot 208 has returned to the top spot in both the monthly and year-to-date model ranking – significantly ahead of the Dacia Sandero in second place. The 208 is likely to dethrone the Golf as Europe’s best-selling car by the end of this year.

The BEV ranking was led by two Volkswagen models – the ID.4 and the ID.3. Sales of the former continued to increase because of its key market position as a midsize electric SUV. In contrast, registrations of the ID.3 declined by 3% in October, and by 41% to 34,320 units year-to-date.

At third position in the BEV ranking was the Fiat 500, maintaining its position as the most popular electric car since January, excluding Tesla’s models. The Renault Megane E-Tech became the fifth most popular EV in Europe, outselling rivals such as the Cupra Born and Nissan Leaf by a significant margin.

Polestar entered the top 10 due to a strong performance from the Polestar 2 – the best-selling premium EV in October, ahead of the Tesla Model 3 and BMW i4. Notably, the latter became the most popular electric BMW.

You can see the full rankings by OEM, brand, model and segments by submitting the form below: