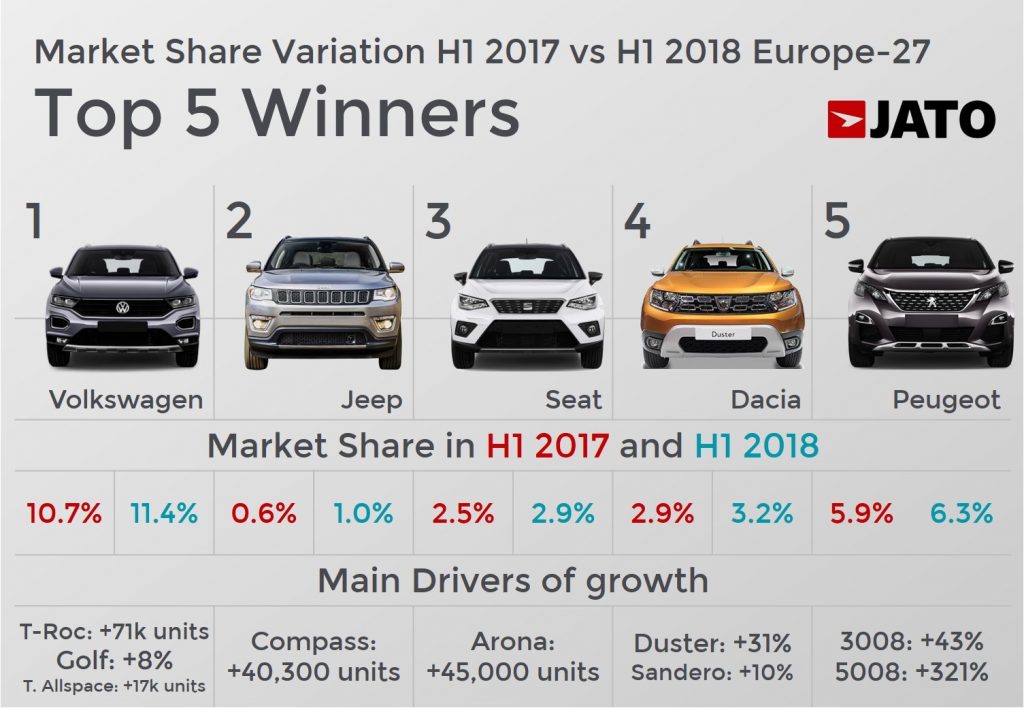 European car registrations posted a record during the first six months of this year. With more than 8.66 million units, the market grew by 2.7% compared to the same period of 2017. The data collected by JATO shows that 20 of the 27 markets analyzed registered increases, with double-digit growh in 8 countries. The good economic situation along with a wider range of choices continues to boost the registrations. These were the main winners and losers. 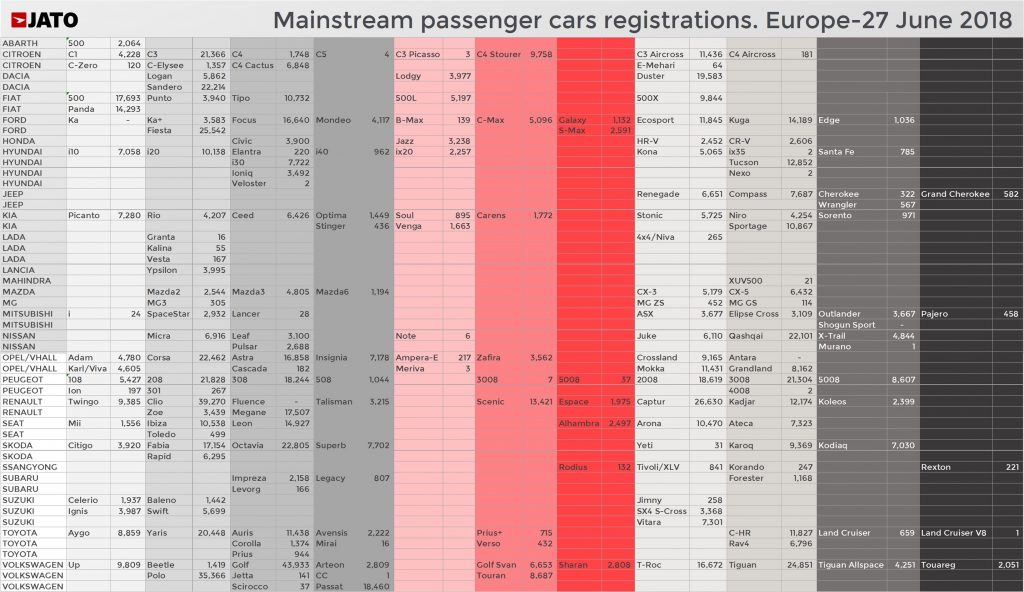 As consumers continue to shift from traditional segments to SUVs, Volkswagen is making use of this trend and improves its position. After a tough year following the diesel issues, Volkswagen brand is growing strong again, with its registrations up by 9.2% to 988,500 units. It was its highest H1 results in Europe in 20 years and confirms the positive impact of Volkswagen’s latest moves. The brand arrived late to the small SUV party, but it has done it in the best way: with an appealing product.

Volkswagen good results were possible thanks to the excellent commercial performance of the T-Roc, the small SUV that sits below the popular Tiguan. It is already the 5th best-selling Volkswagen with 71,000 units, counting for 7.2% of the brand’s total registrations.  The T-Roc plays in the middle of two hot-selling segments, the B-SUV and C-SUV and anticipates the coming T-Cross, which will be cheaper and shorter. Therefore, the sales growth is expected to continue in the coming months.

The arrival of the new Compass explain most of the growth posted by Jeep. The new generation is definitely more appealing and meets a lot of the consumer taste in Europe. Jeep’s registrations jumped from 53,500 units in H1 2017 to a record of 89,400 units in H1 2018. The 67% increase was the highest among the top 25 best-selling brands in Europe. Jeep registered 15,800 units during the first half of 2014. The localization of part of its production, its better position in Italy thanks to FCA, and more appealing cars like the Compass, explain this impressive result.

The surprise was to see the Mexican-made Compass outselling the Italian-made Renegade. The Compass was Europe’s 9th best-selling mainstream compact SUV, behind the Renault Kadjar and ahead of the Skoda Karoq. It allowed the brand to outsold Land Rover and become the 11th mainstream SUV brand in Europe. Despite the good results, Jeep is still far from the strong results posted by the leaders in Europe: Peugeot (257,200 units), Volkswagen (222,600), Nissan (201,200), Renault (191,700) and Opel/Vauxhall (165,100).

The Spanish brand was also boosted by its latest arrival, the Arona. As the Ateca is already posting declines despite its age (it was introduced in Q2 2016), Seat is relying on the new Arona to maintain the growth pace. The small SUV was Seat’s third best-selling product behind the Leon and Ibiza, and was the only model to bring more clients to the brand, as the rest of the range posted negative changes (with the tiny exception of the Leon, whose registrations grew by 2%).

Despite its good results, the Arona doesn’t shine at home. As it happens to the Ateca, this little Seat isn’t still the top-seller of its segment in Spain, as it was outsold by the Peugeot 2008, Renault Captur and Opel Mokka. The usual thing is to see the local brands leading in their markets. This is the case of the Captur and 2008 in France, the 500X and Renegade in Italy, and the Mokka and T-Roc in Germany. But the Arona hasn’t had a negative effect on its big rivals.

The second generation Duster boosts Dacia’s registrations during the first half. It was the third best-selling B-SUV in Europe outselling the Opel/Vauxhall Mokka. The car is just a good evolution of the previous generation keeping the features that allowed its success: affordable, big and good looking. Peugeot gained traction thanks to the continuous success of the 3008, which was launched two years ago and still posts strong growth (+43%). The 5008 also contributed with its volume jumping from 10,600 to 44,600 units.

Skoda grew by 8.3% to almost 400,000 units. Even if the Octavia and Fabia’s registrations remained stagnated, growth was possible thanks to the Karoq and Kodiaq, which combined counted for 20% of its total. In the case of Kia, whose market share increased from 2.9% to 3.1%, the first six months volume growth was boosted by the Picanto, new Stonic (the 4th best-selling Kia) and Niro.

Fiat posted the highest market share lose, as its registrations fell by 10% to 405,500 units. The Italian brand deals with two big problems: an aging range and the lack of SUVs. This is particularly clear in Italy, its home market and where Fiat posted the lowest h1 market share in 30 years. While its rivals keep gaining traction thanks to more SUVs, Fiat continues to rely on the Fiat 500, an 11-years old city-car. The 500X is the only SUV in its range. No SUVs mean lower growth.

Opel/Vauxhall lost 0.5 points of share due to the shrinking sales of the Corsa and Astra, and the negative effect of the stronger competition on the Mokka. These three models offset the positive start of the Crossland and Grandland, and the 40% increase posted by the Insignia. Nissan also registered negative results as a consequence of aging products like the Juke, and more competition to its X-Trail, which is not Europe’s best-selling midsize SUV anymore. However, the Qashqai continues to be Europe’s top-selling SUV, and the Leaf is now the top-selling EV.

Ford is also losing share because of the model changeover of the Fiesta and Focus and the big falls posted by its MPV range. While its SUVs gained more traction in H1 to represent 26% of its total sales, the MPVs reduced their share in Ford’s sales from 15% to 9.6%. Ford’s strong dependence on the UK is also affecting its operations, as its registrations there fell by 14%.

The other big market share losers were the 3 German premiums. Mercedes recorded the biggest lose with its market share dropping from 5.6% to 5.3%, following registrations declines in its 3 top markets, Germany, UK and Italy. As the diesel crisis continues to hit, especially the premium makers, Mercedes is also dealing with lower demand of its top models, which are getting old, the C-Class (-17%) and the A-Class (-7%). It was also the case for Audi, whose A3 and A4 led its model ranking but posted declines of 7% and 3% respectively. For the first time in year, the 3-Series (-20%) didn’t lead BMW model ranking, and occupied the 4th position behind the 1-Series (-9%), X1 (+2%) and 5-Series (+14%). 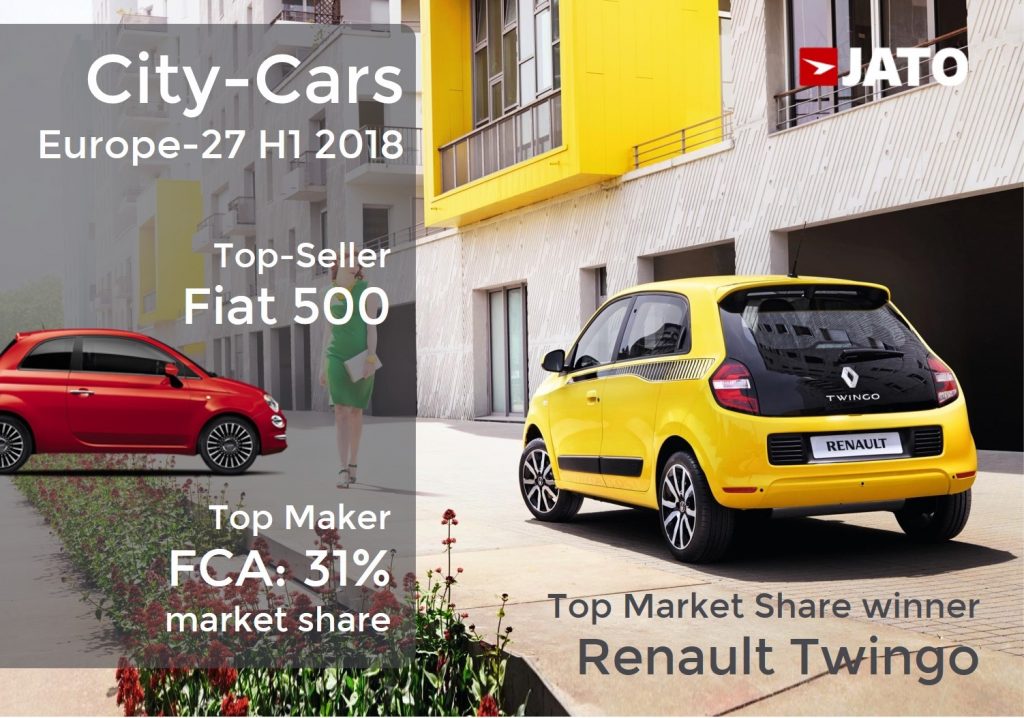 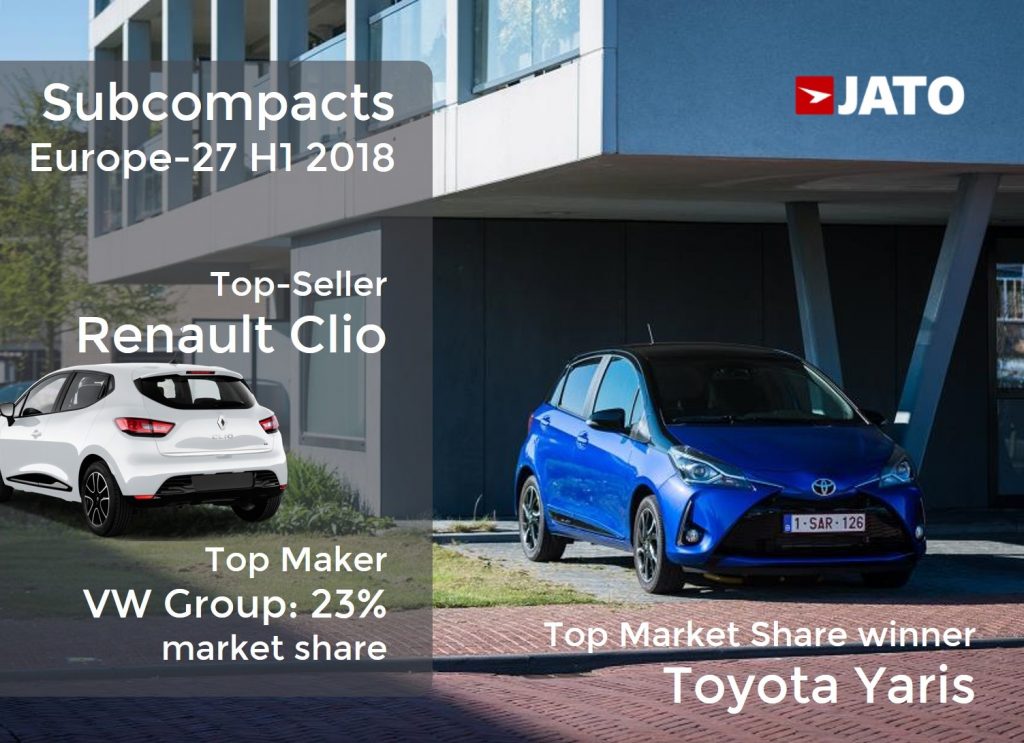 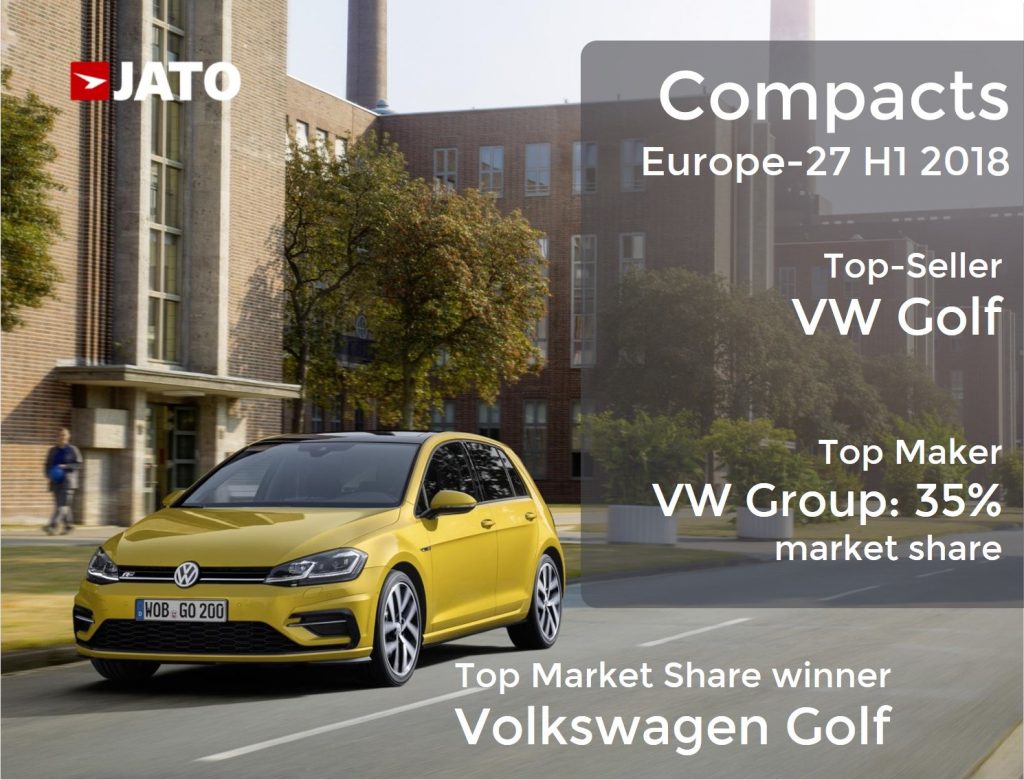 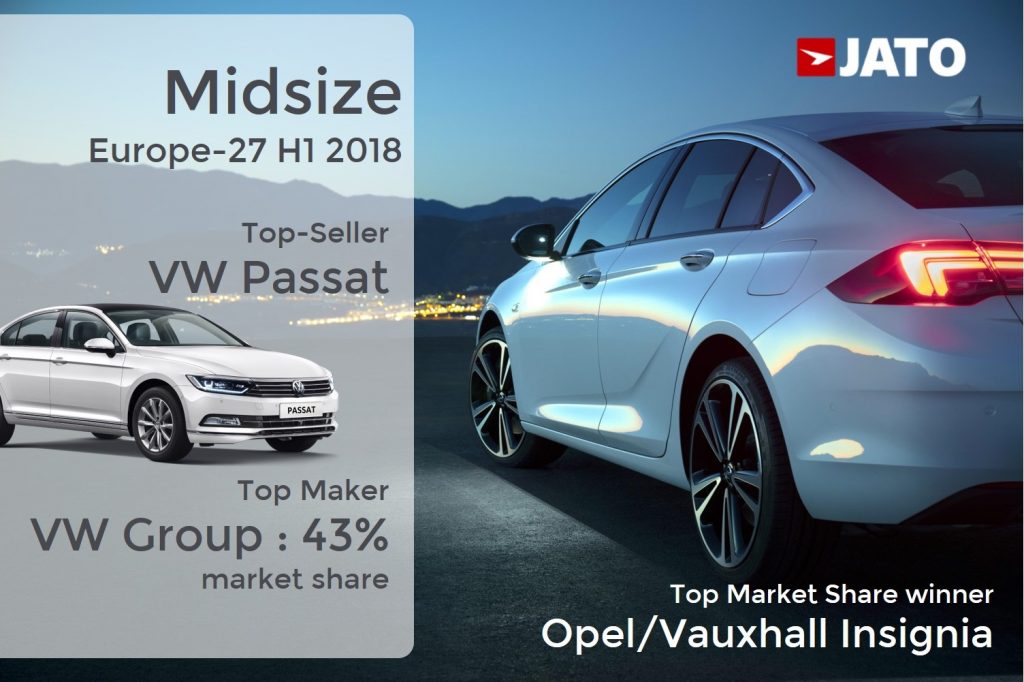 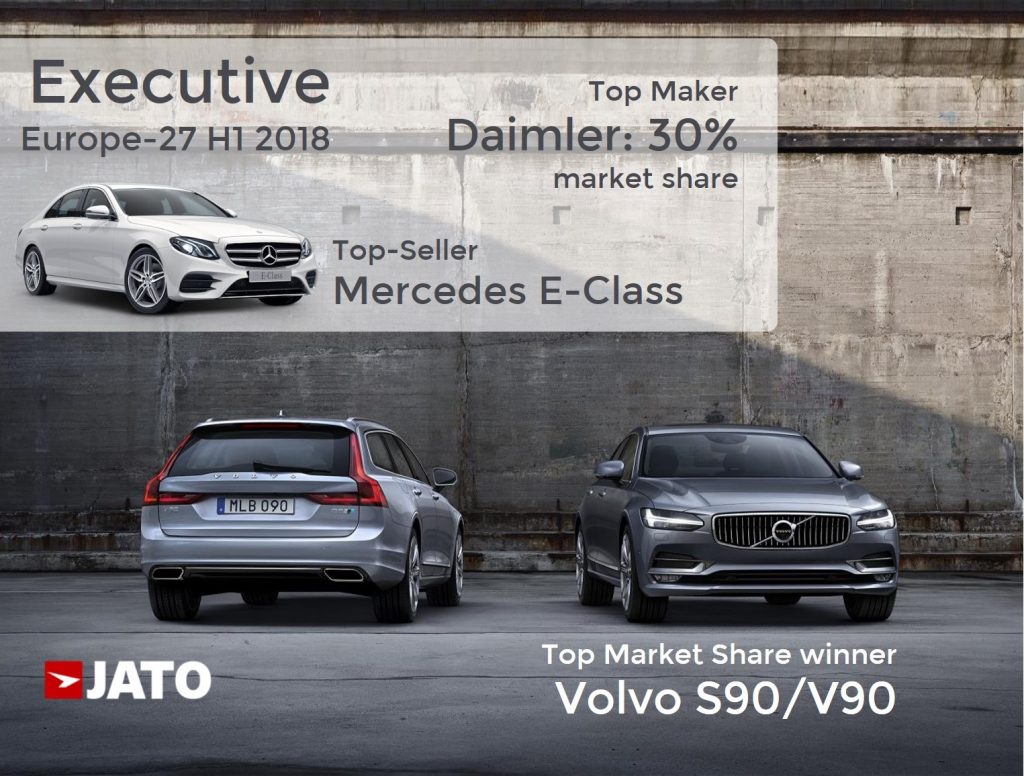 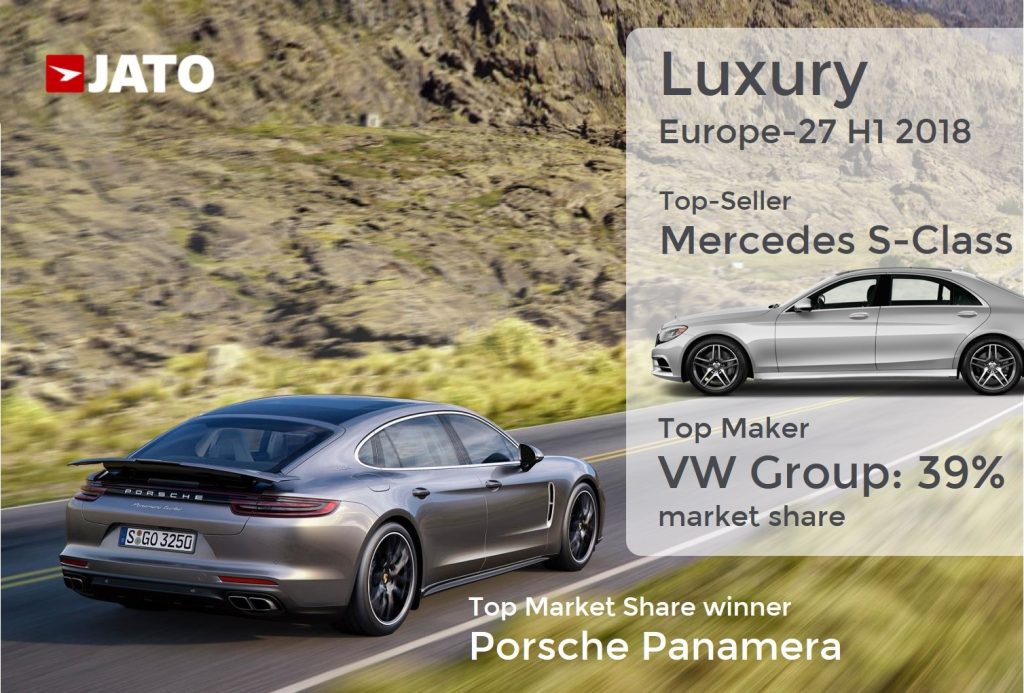 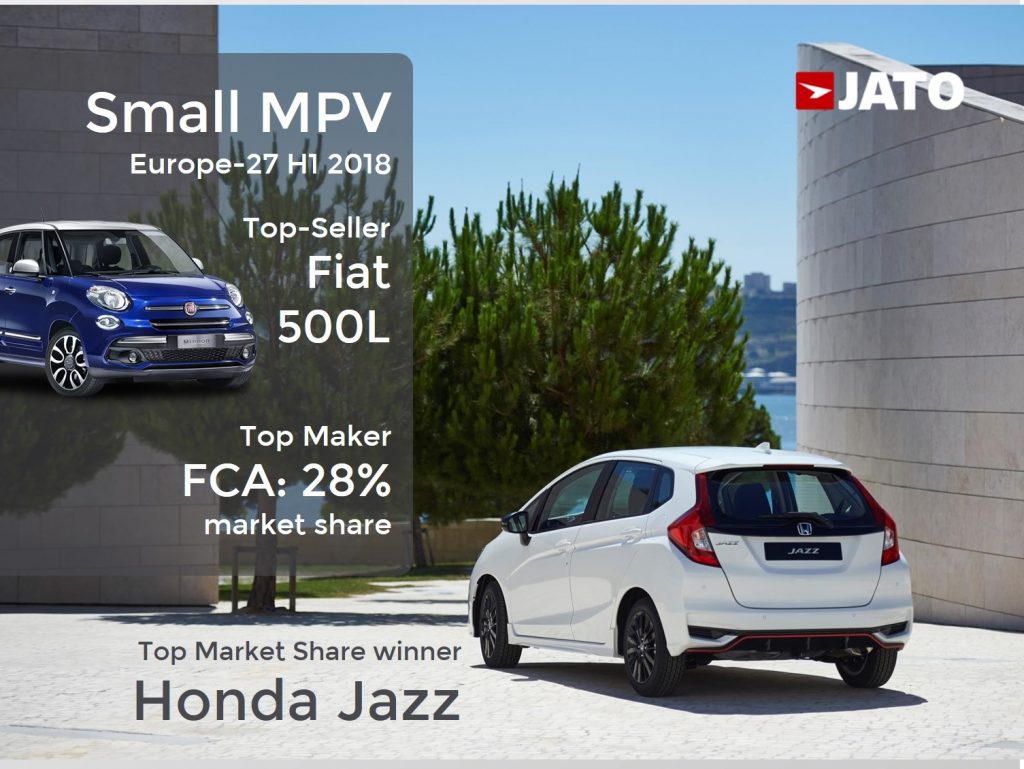 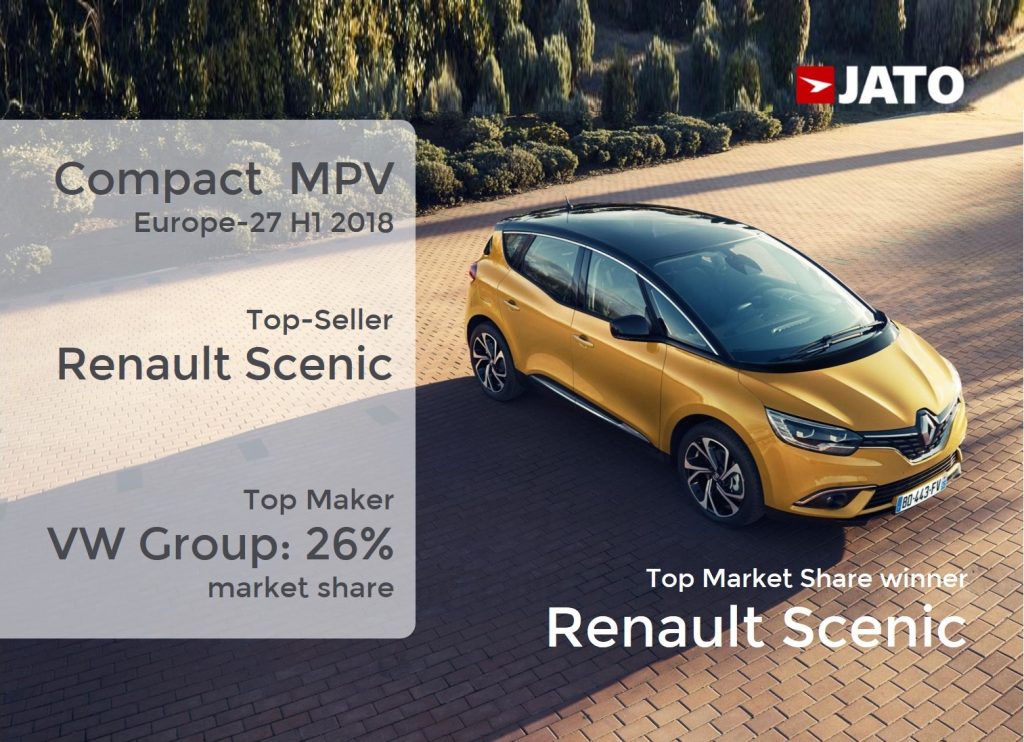 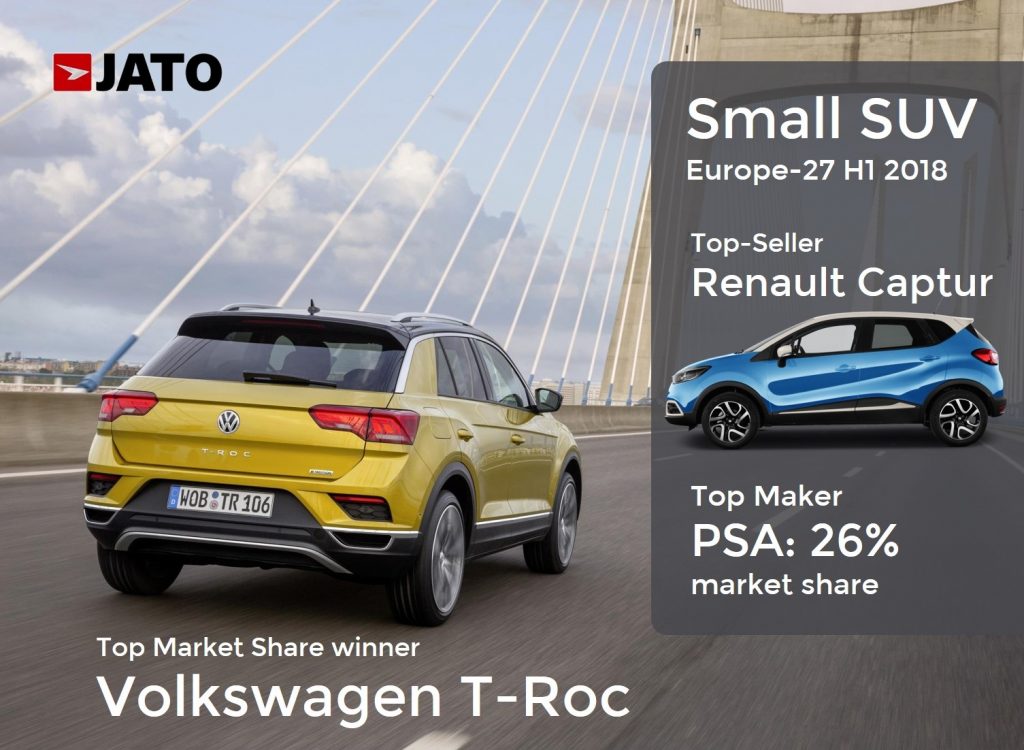 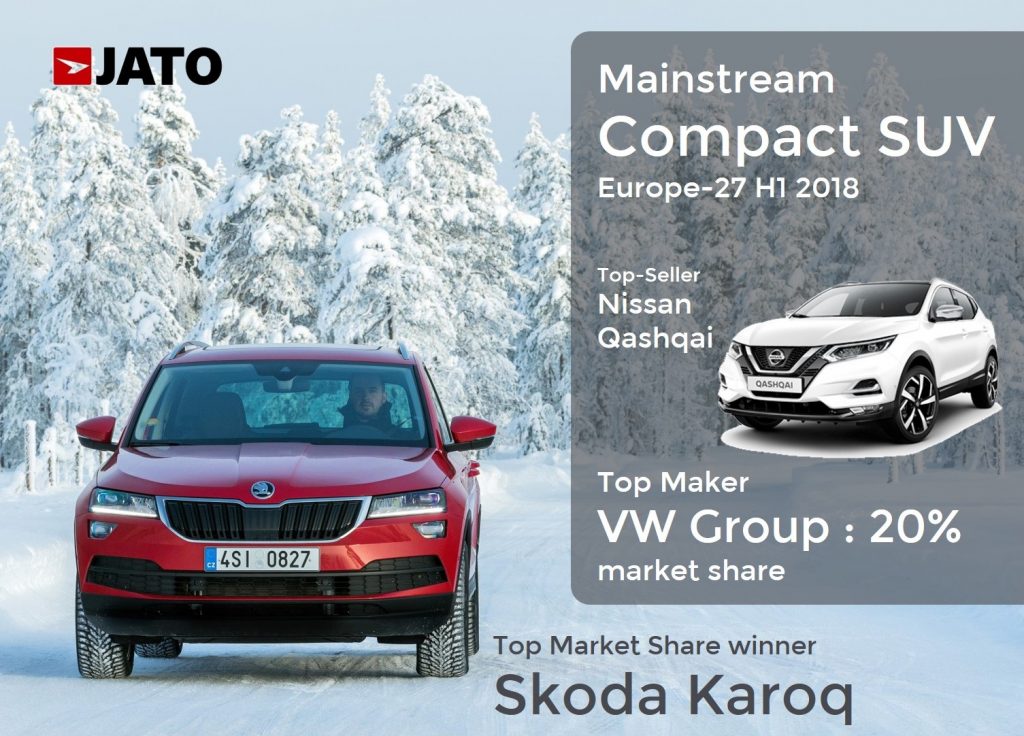 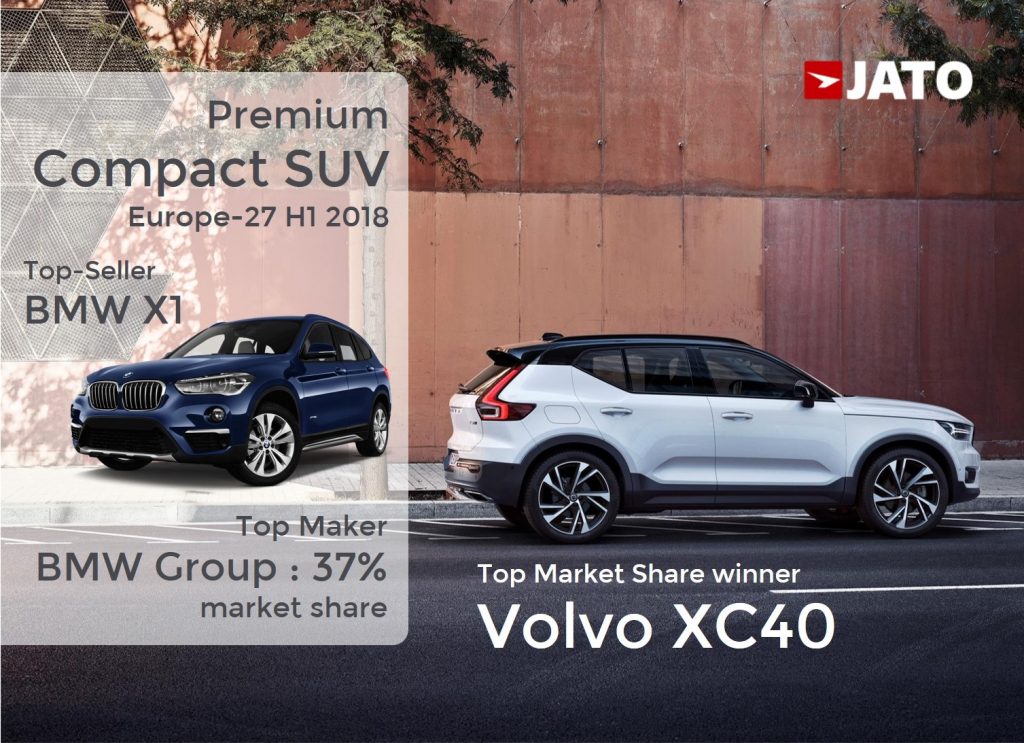 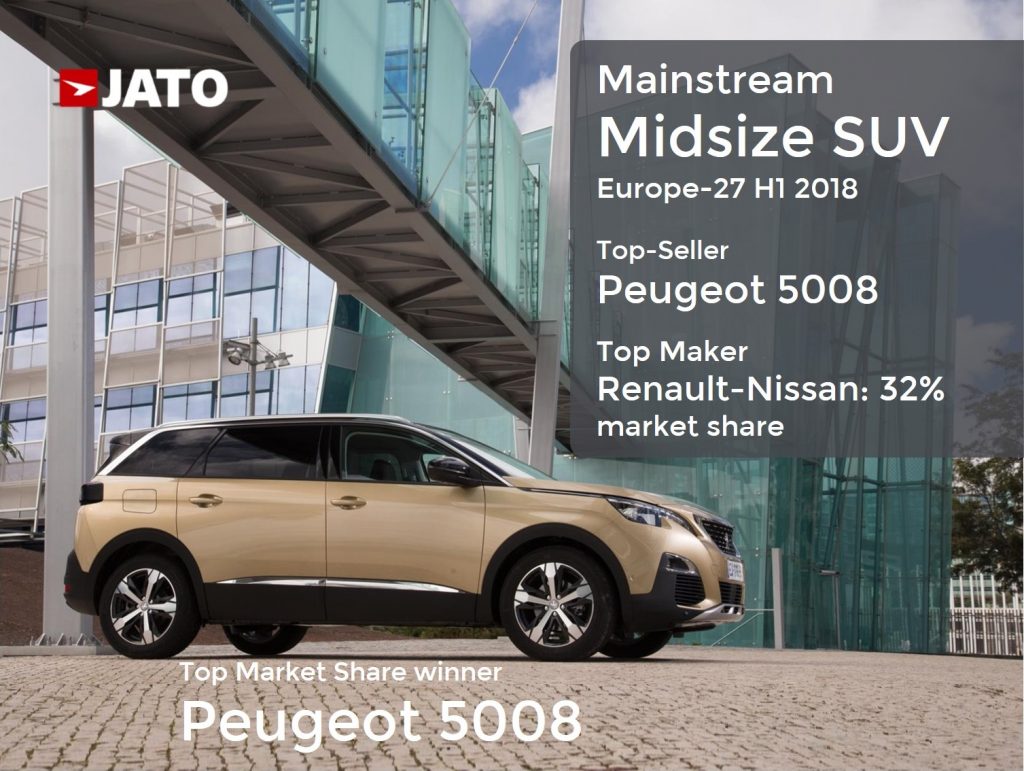