How are the X-Class, Fullback and Alaskan performing in the European pickup market?

Being a premium or a top player in Europe doesn’t always guarantee big volumes of car sales. At least that’s the first conclusion that can be drawn when looking at the latest figures for the Mercedes X-Class, Renault Alaskan and Fiat Fullback in the European pickup segment. Total pickup registrations increased by 8.4% to 59,200 units during the first four months of this year. Even if growth has slowed down, pickups continued to gain share among light commercial vehicles, with their market share increasing from 8.2% in Jan-Apr/17 to 8.6% in 2018. 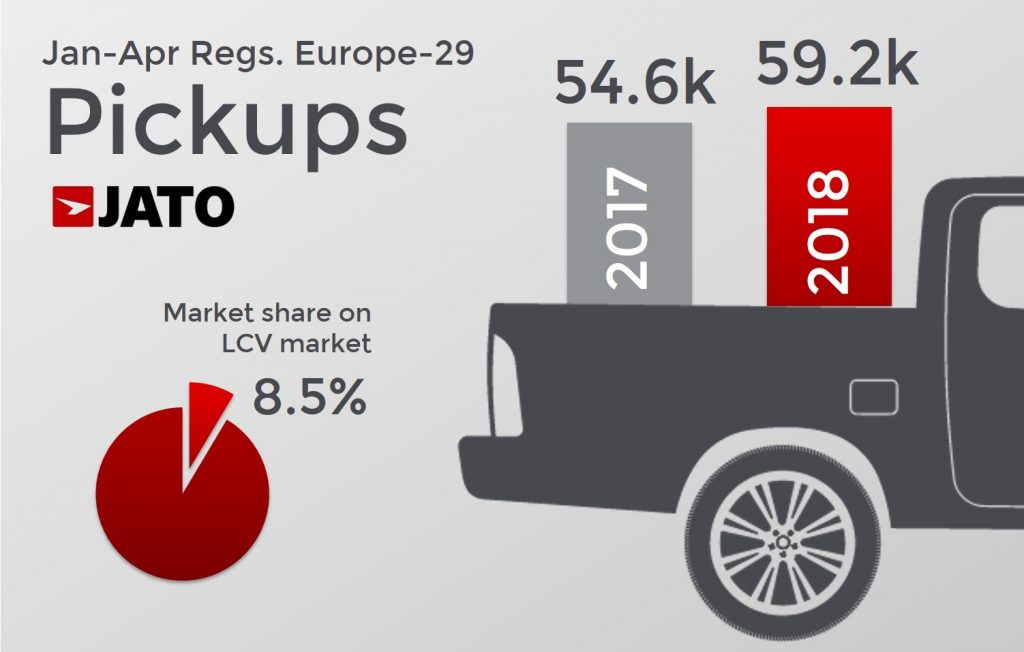 Despite the current challenges its facing, the British market continues to be by far the largest pickup market in Europe. While total LCV registrations fell by 2.3% through April, demand for pickups was up by 1.3% to 18,500 units. The total accounted for 16% of total LCV registrations, the fifth largest share in Europe. Demand grew even faster in Germany, where there were 8,000 registrations, which represented an increase of 7.1%. France and Spain came third and fourth, and Sweden outsold Italy. But Greece was actually the largest market in terms of sales penetration, as 37% of LCV registrations came from pickups. 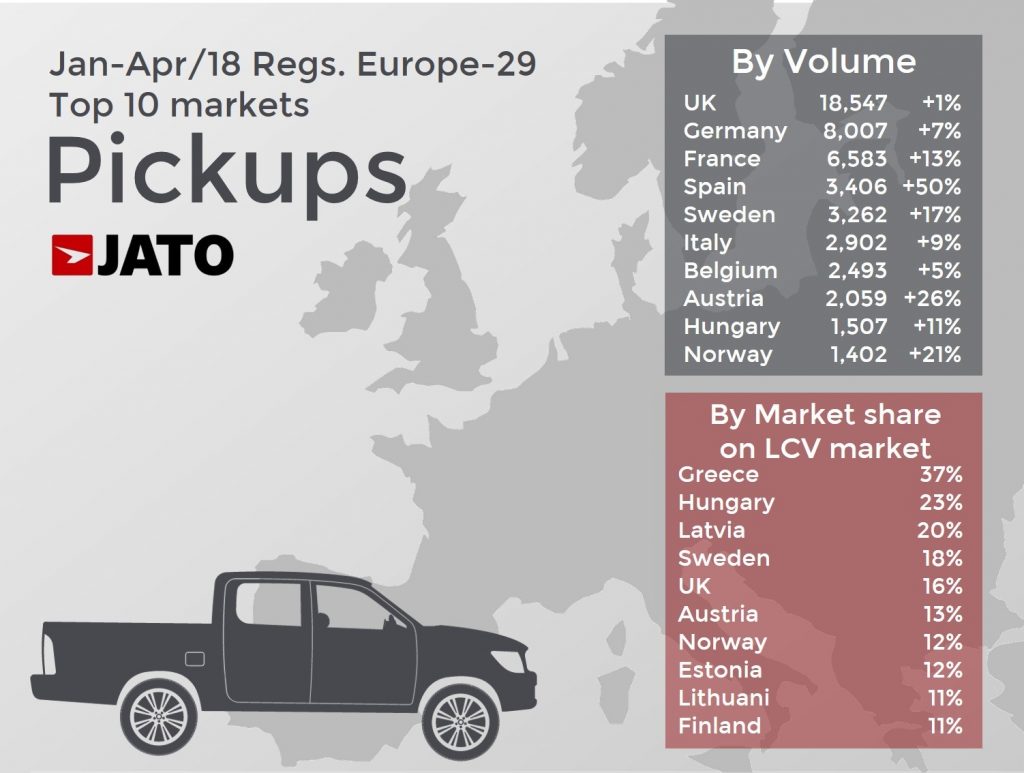 Almost all of the pickups registered in Europe-29 made-up part of the midsize subsegment. They were led by the Ford Ranger, whose strong growth increased the lead over the second-placed Toyota Hillux and third-placed Nissan NP300/Navara. They were followed by the Mitsubishi L200, the Volkswagen Amarok (which was the first European model in the ranking), and the Isuzu D-Max (which was able to offset the stalled sales in Britain thanks to strong increases in France, Germany, Norway and Hungary).

What about the latest arrivals? Between late 2016 and the first half of 2017, the pickup market welcomed the arrival of three new players: Fiat, Mercedes and Renault. The Italian pickup is no different from a rebadged Thai Mitsubishi L200, while the Mercedes-Renault pickups are redesigned versions of the Nissan Navara. Fiat and Renault decided to enter the segment by making use of their strong presence in the passenger cars market, while Mercedes decided to explore the segment by providing the first “premium” pickup. 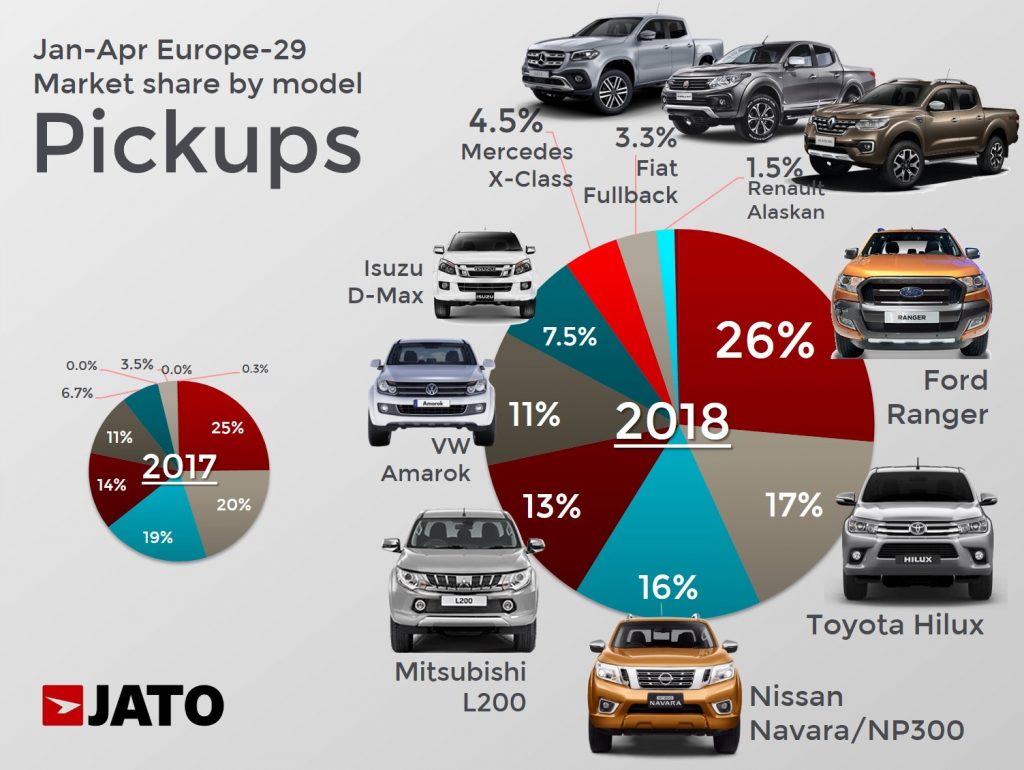 January-April 2018 registrations of the Fiat Fullback, Mercedes X-Class and Renault Alaskan totalled 5,400 units, which equated to 9.4% of the total segment. This was higher than the Isuzu D-Max’s total, but lower than the fifth-placed Volkswagen Amarok. Even if it is still too early to make conclusions about the Mercedes and Renault pickups (which have been available in Europe since July and August 2017, respectively), it is clear that the pickup is a tough segment for brands to crack who don’t have expertise in it. 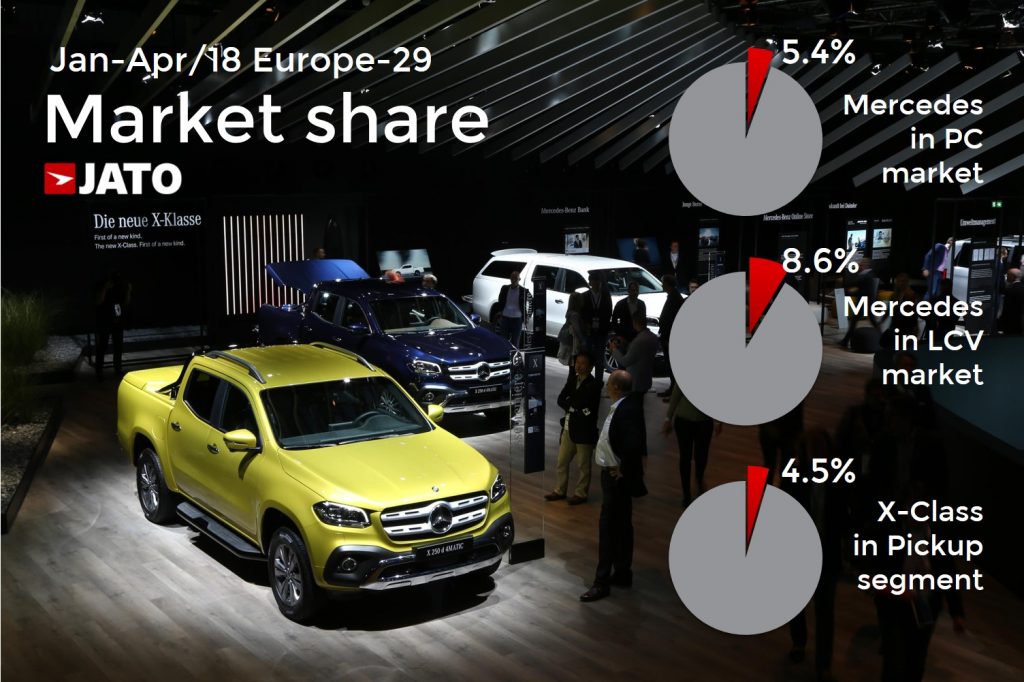 There were 2,600 Mercedes X-Class registrations through April 2018, which counted for 4.6% of the segment’s total. This result contrasts to the stronger position Mercedes holds in both the light commercial vehicle market (8.6% market share) and in the passenger car market (5.4% market share). The Mercedes X-Class posted its highest market share in Germany, where it made-up 13% of the segment, but this was still quite far from the 31% share posted by the Ford Ranger. It also had an important market share in Croatia (11%) and Denmark (9.3%). On the other hand, the X-Class was quite a rare thing to see in France (1.6% share) and the UK (2% share), where it was introduced in November and December, respectively. 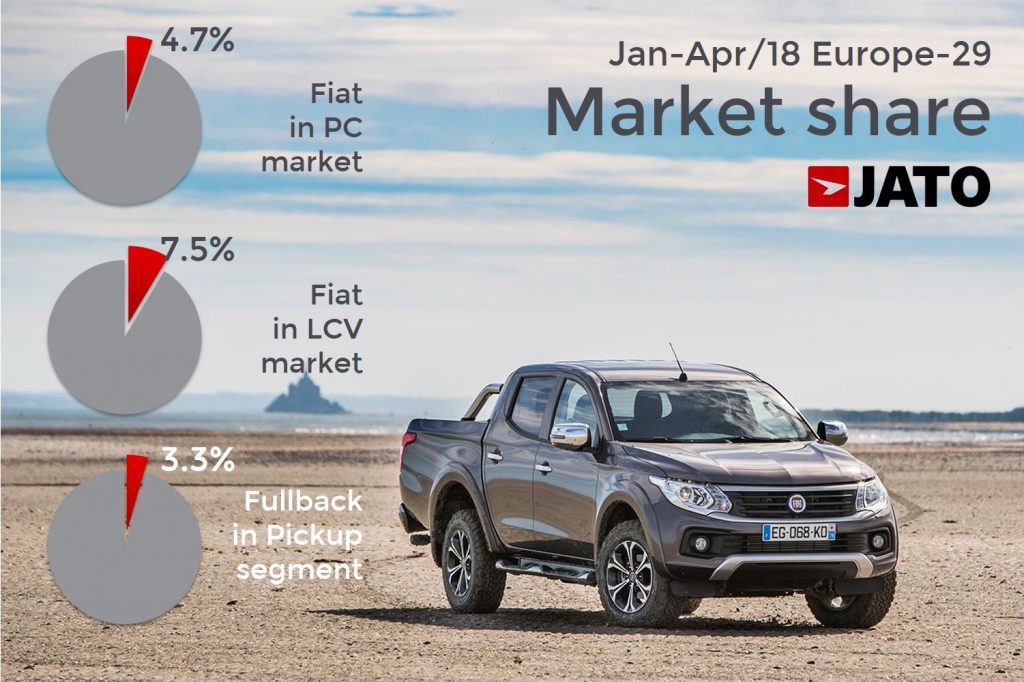 The Fiat Fullback, which was first launched in Italy in April 2016, is already losing ground in Europe. Its registrations increased by 2.7% through April to 1,900 units, which means that its market share fell from 3.5% in Jan-Apr/17 to 3.3% this year. As opposed to the majority of Fiat cars, Italy wasn’t the top market for the Fullback in Europe. Its biggest market was actually France with 348 registrations, followed by Germany with 303 registrations and then the UK and Italy with 271 registrations each. It’s worth noting that volume fell in all of these countries and that Fiat’s market share in the LCV segment was 7.6% in Jan-Apr/18. 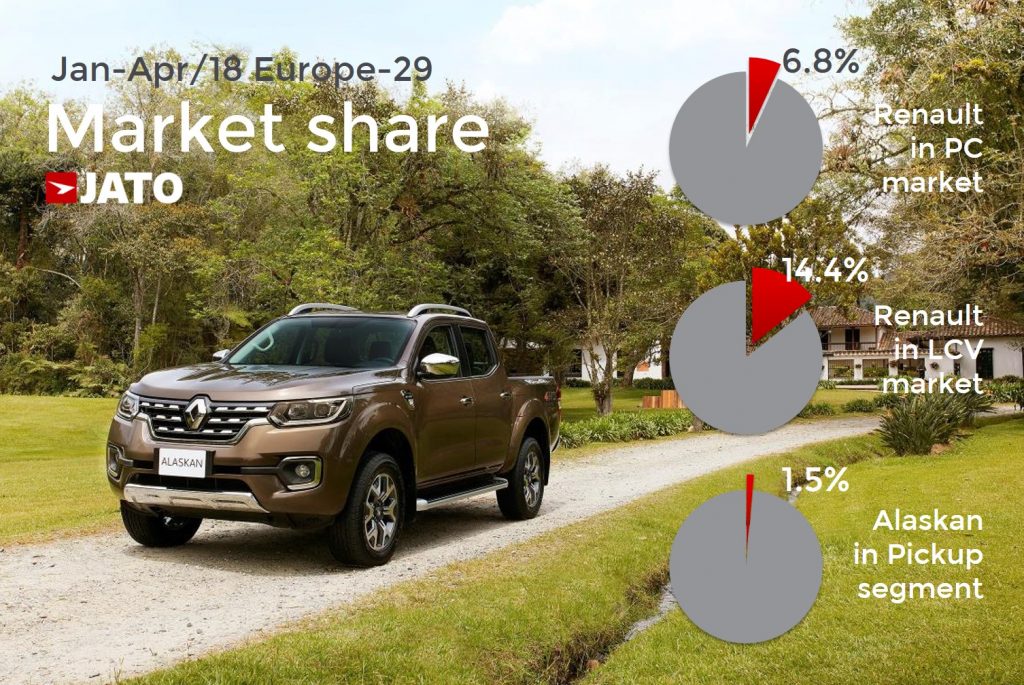 Meanwhile, Renault registered 852 units of the Alaskan, which represented 1.5% of the segment’s total. As expected, France was its largest market in Europe with 317 units, followed by Germany (127) and Sweden (106). Renault doesn’t have a big sales target for the Alaskan due to the strong performance of the Nissan Navara/NP300. Any additional sales of the Alaskan are welcomed, but they are not fundamental for the survival of the midsize pickup, as Nissan already occupies a key position in the segment.

2 responses to “How are the X-Class, Fullback and Alaskan performing in the European pickup market?”