A lot of talking, analysis and PowerPoint presentations has been made to find the right way to get to the green mobility. As the environmental issues become a politically correct topic, and “a must” policy for many governments, the society and the automotive industry are heading to unknown dimensions.

During the last 100 years, the transportation has been traditionally associated to the engine. We drive cars thanks to the combustion engine solution created many years ago, and while it boosted the development everywhere, this formula is now more a threat than a solution. The research for a shift to greener alternatives is under way with its challenges and threats too.

Cars are cleaner, at least when we drive

The tougher regulation imposed by the European Commission is making of Europe a stronghold for the new technologies. While Japan followed the hybridization strategy, and USA barely changed its mix, Europe decided to take the same route that took China some years ago: the electrification. The OEMs operating in Europe bet on the EVs to reduce emissions.

Thanks to the electric, plug-in hybrids and hybrid cars, the offer in Europe is definitely cleaner than what the consumers could buy 10 years ago. At least from the point of view of emissions because other variables such as the production process, the electricity generation, and the batteries life cycle, must be also considered. 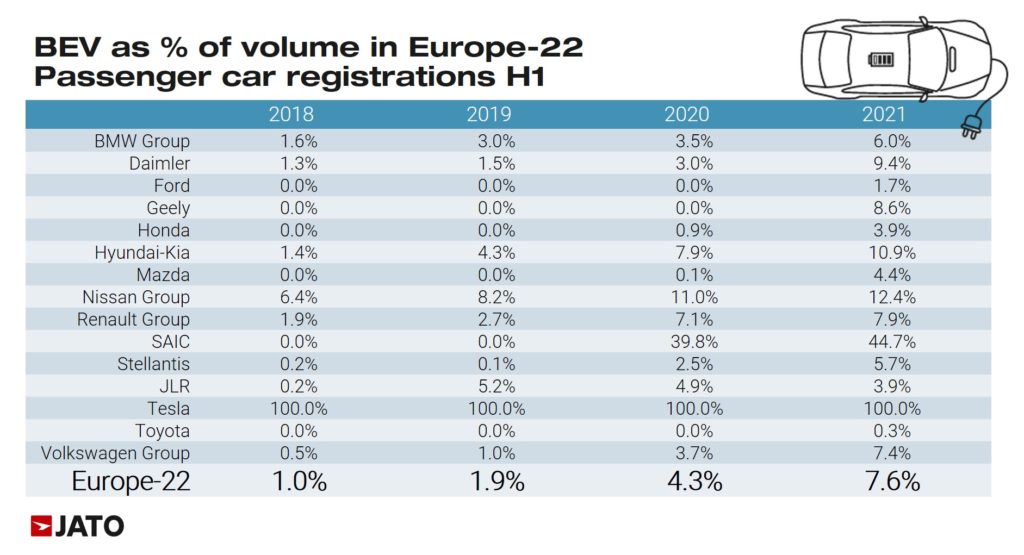 In general, the average CO2 emissions produced by a new car in Europe are 24% lower than 10 years ago. The significant progress has been achieved despite the boom of SUVs, bigger vehicles that are 18% heavier and more pollutant than traditional cars. Last year, the industry posted the lowest average emissions since 2007, when JATO started to track this information.

There’s a common pattern among the companies leading the way to low emissions. They focus their sales on low-emission cars (hybrids included) or their lineup is composed by more small than big cars. The pure hybrids continue to help Toyota to keep its leadership as the OEM with the lowest average emissions in Europe. Two in three of the cars registered by Toyota were powered by a hybrid engine, producing an average of just 89.5 g/km. 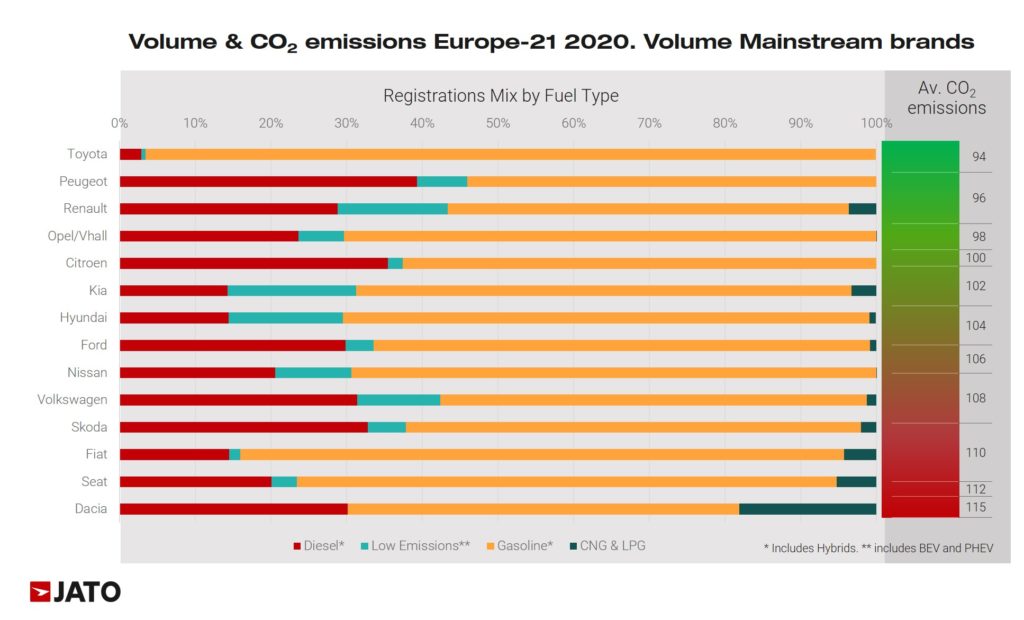 The bet on hybrids is paying off, and in contrast to its rivals, it is not as expensive to implement as their electrification plans. That’s the case of PSA, before it joined Stellantis, which posted an average of 97.8 g/km, or just 0.3 g/km higher than Toyota, but due to the focus on more efficient gasoline engines, and the higher share of plug-in hybrid and pure electric cars.

Other carmakers like the three Germans – VW Group, Daimler and BMW Group – produce higher emissions due to their product mix. They sell a lot of big sedans and SUVs, so they are moving fast to bring more electric cars to the market. Volkswagen Group has now 11 different electric models available, the largest offer from any carmaker. 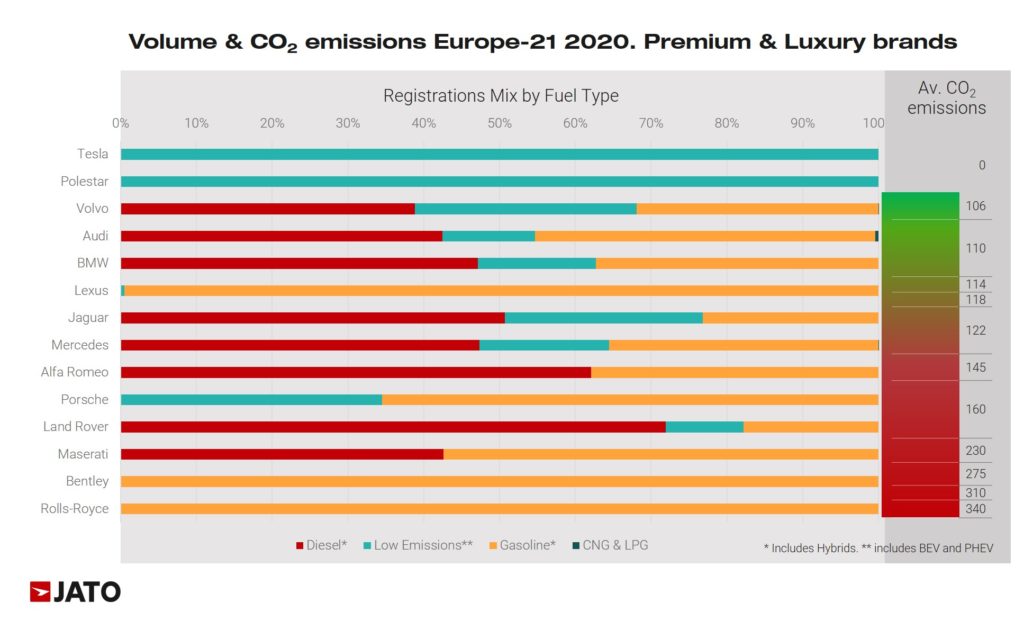 The reasons for the drop

The spectacular drop seen in the average emissions between 2019 and 2020 is not related to the pandemic and its effect on the demand. More than this, the OEMs are making use of all the legal alternatives to reduce their fleets emissions.

One powerful one is the super-credit policy from the European Commission. Through the associations, known as pools, the carmakers behind the targets can buy credits to the brands that are ahead of the objectives. Therefore, there are pools involving different groups like FCA, Tesla and Honda, or SAIC with Volkswagen. By doing so, the zero emission cars (or those with emissions below 50 g/km) are counted multiple times for the calculation of the average specific emissions of a manufacturer.

Another important reason is the positive evolution of SUVs. These vehicles were born as a big, boxy, capable, and low fuel-efficient way of transportation. They used to be very expensive and for the elites. Today, their popularity is based on appealing designs, a wider offer, and the usual higher driving position. The average price of a SUV is 31% higher than the retail price of a traditional car (hatchback, sedan, city-car), and still they manage to make up around 40% of the registrations.

Fortunately for the industry, the SUV’s emissions continue to decrease thanks to the adoption of new powertrains, and the introduction of smaller models. Their average totaled 114.7 g/km in 2020, compared to 130.9 a year earlier. Consequently, they posted the biggest drop among all segment, although the average continues to be higher than the one posted by regular cars at 96.9 g/km.

Greener cars at the expense of volumes?

The big dilemma that the European auto industry faces is how to conciliate the necessity of a clean mobility with the economic growth. People have the right to breath clean air and to have access to quality jobs. As the regulation gets tougher, it seems that some of the carmakers operating in Europe will need to find ways to accelerate the electrification plans with some polemic consequences.

One of them is the sales volume and its impact on production. Today, the electric versions of the cars that are available with both ICE and BEV options count for 18% of the combined sales of ICE and BEVs, the highest share so far. In other words, in the best of the cases (until now), the BEV market is 18% of the market. If the whole industry was to shift entirely to BEVs, we would have around 18% of the current volumes, or a bit more than 2.8 million units under the total of 2019 (before the pandemic).

Of course, this would be the worst case, as the penetration of BEVs should continue to grow. However, under their current prices, these cars can’t ever reach the quantities of the ICE cars. Prices should drop as the battery costs falls, but the question is: will the current costs structures of the OEMs will resist until we see a parity of costs between ICE and BEV? Will the factories continue to operate if volumes fall considerably?