Average CO2 emissions for the top-selling premium brands remained stable in 2017. That’s the first conclusion based on the data gathered by JATO in 23 European markets. Last year’s average grew by only 0.1 g/km to 126.2, with Mercedes, BMW and Audi counting for 72% of total registrations. The result was 12.4 g/km higher than the average posted by the 10 best-selling mainstream brands, reflecting the big impact that have the super cars and big SUVs. 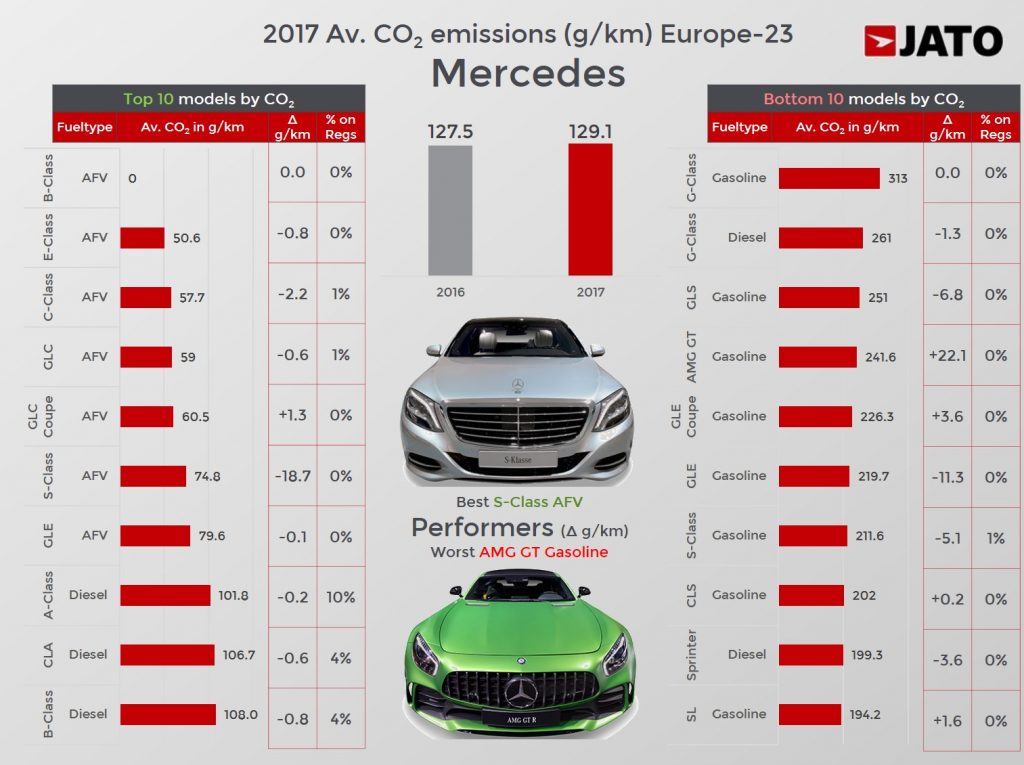 It was the best-selling premium brand in Europe, but occupied the 7th position, among the top 10 premium brands, in terms of average CO2 emissions. Mercedes average increased by 1.6 g/km mostly because of the negative results posted by two of its top selling models, C-Class and GLC, which increased their sales in 2017. The GLC Coupe contributed also to the increase. Most of Mercedes registrations last year correspond to cars with average between 130 and 160 g/km. Good results for BMW, which got close to the third position among the premium brands. The drivers of the average decrease was possible thanks to the all-new 5-Series and X1, which counted for 28% of its registrations last year. Even if they are still a rare thing to see, the hybrid and electric BMWs are now counting for 7% of its total registrations, which also helped. Nevertheless, more than half of its volume posted average between 110 and 130 g/km. 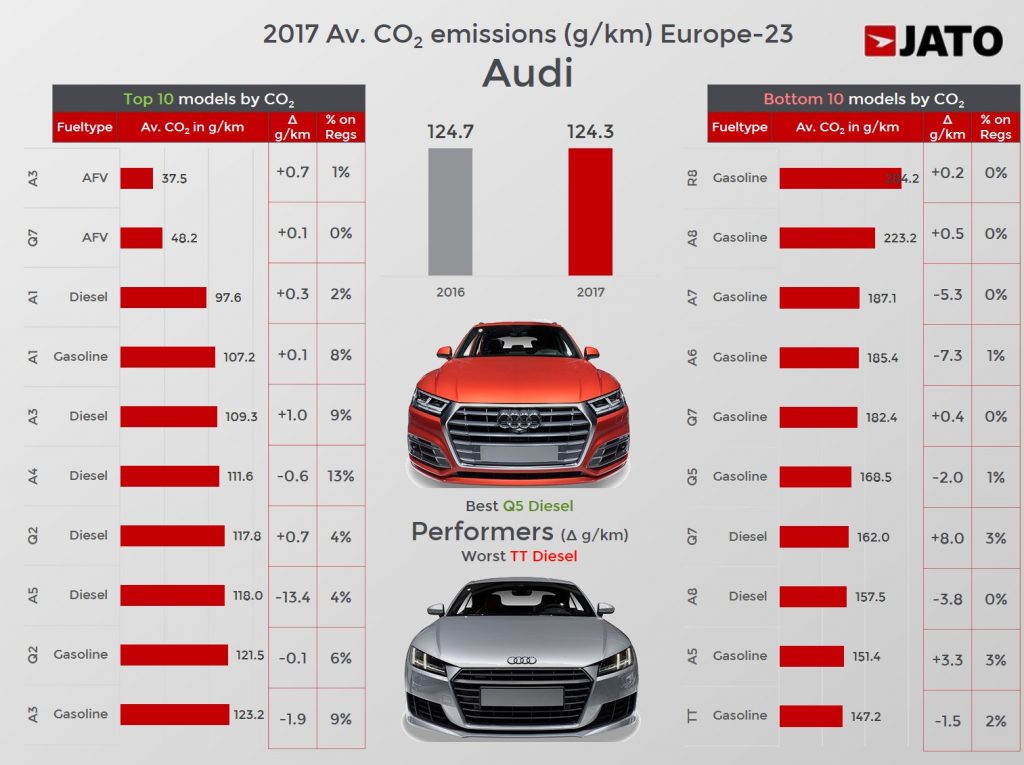 Audi’s average remained stable partly because both the improvements posted by the A4 diesel and A3 gasoline were offset by the average increase recorded by the A4 gasoline and A3 diesel. Audi is still behind BMW and Mercedes because it doesn’t have a big range of AFV and most of its cars recorded average between 110 and 160 g/km. The big improvers: Q5 diesel and A5 diesel. 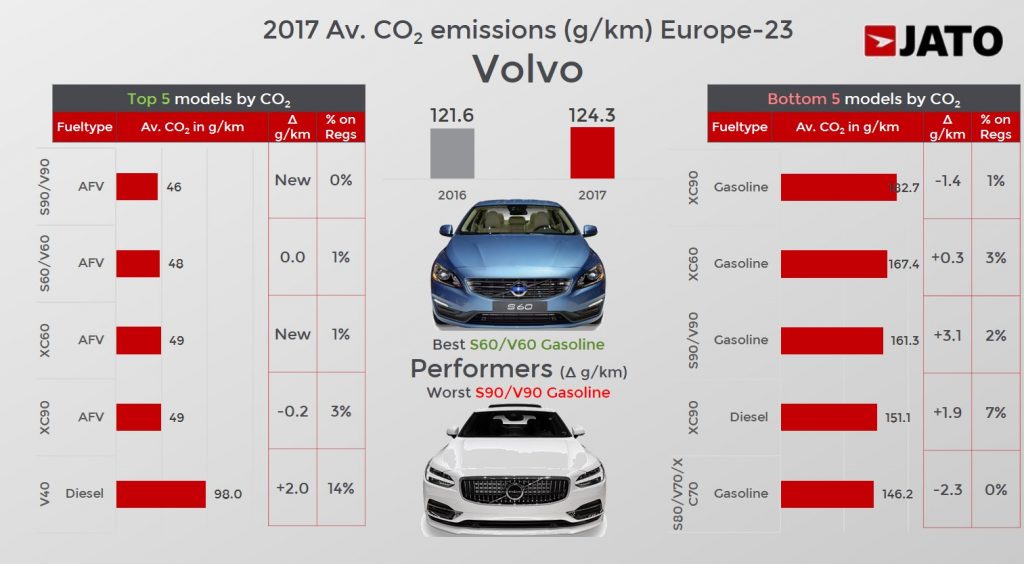 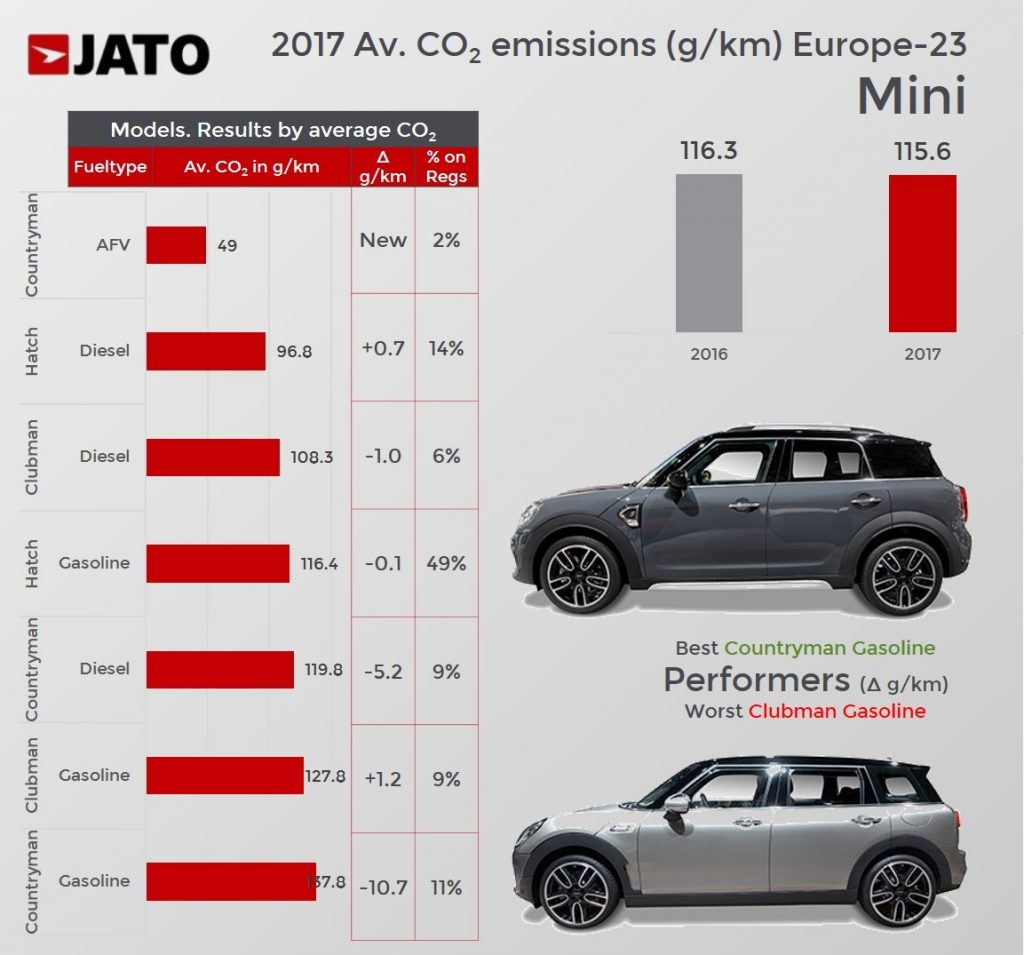 Even if the Mini hatch gasoline was the brand’s top-seller and posted an improvement on its average (-0.1 g/km), the real reason for the average decrease is the good results of Countryman gasoline. The small SUV was the third best-selling product and its average fell from 148.5 to 137.8 g/km. Its hybrid version with 49 g/km, sold 4,000 units. 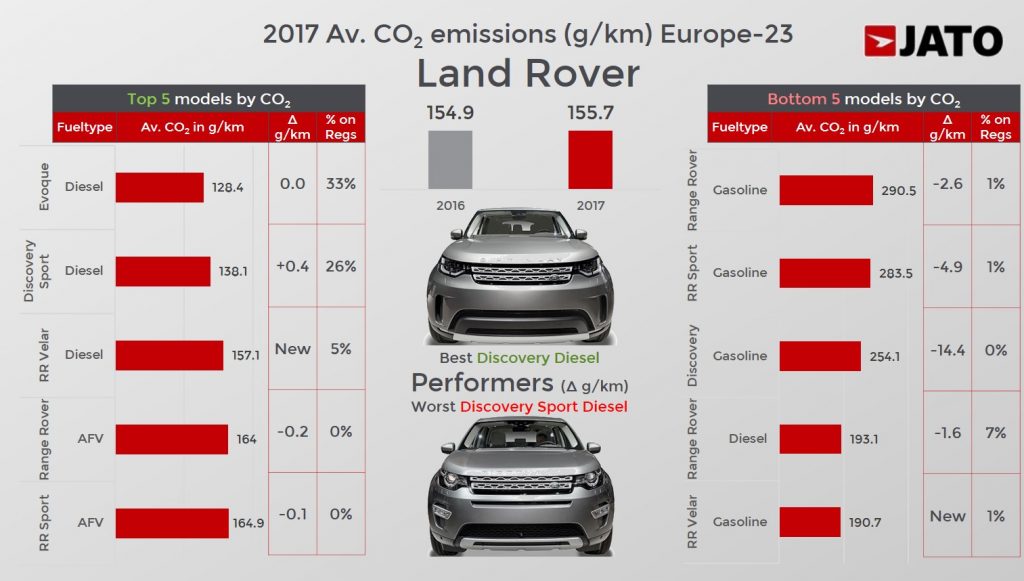 The arrival of the Range Rover Velar didn’t help Land Rover to reduce its average CO2 emissions in 2017. The big improvement registered by the new Discovery diesel (from 202.8 to 183.1 g/km) was not enough to offset the 157.1 g/km average coming from the Velar diesel and 190.7 g/km from the Velar gasoline. The British brand is growing upwards in terms of size, engines while its AFV (Range Rover and Range Rover Sport) are still marginal. 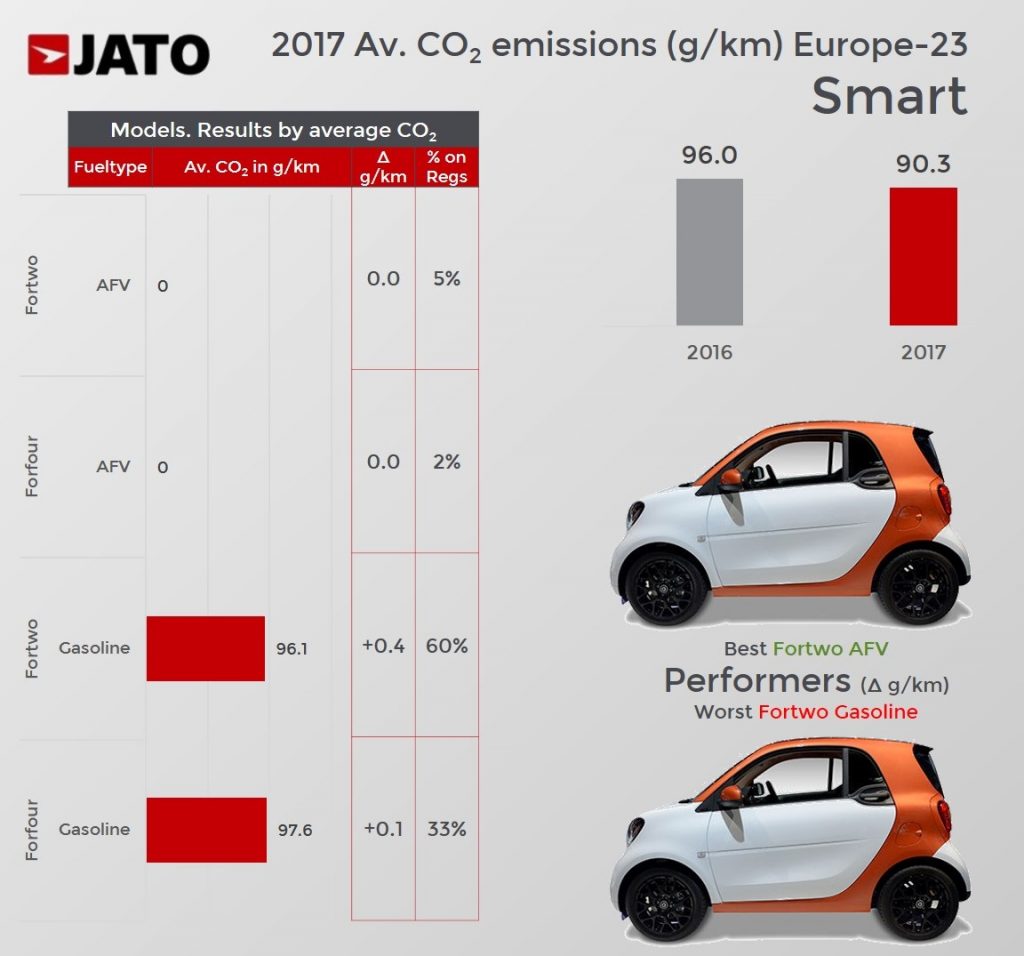 The electric Smarts are already having a positive impact on the brand’s average. As demand falls for its gasoline models, the electric Fortwo and Forfour gain traction. Smart was the second brand with the lowest average CO2 emissions in 2017, behind Tesla. 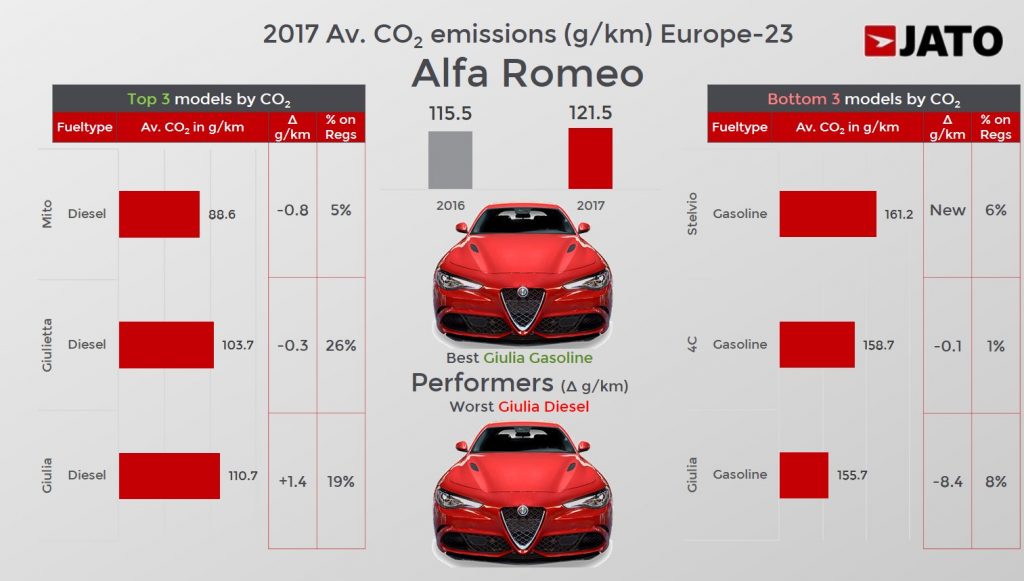 The transformation of Alfa Romeo has its costs. One of them is the impact of the new arrivals, Giulia and Stelvio, on the brand’s average CO2 emissions, as their values were higher than the usual average posted by the Mito and Giulietta. The Giulia diesel posted an average of 110.7 g/km, up by 1.4 g/km, and its registrations jumped by 79%. The average for the Stelvio diesel was 126.5 g/km, and was the third best-selling Alfa. 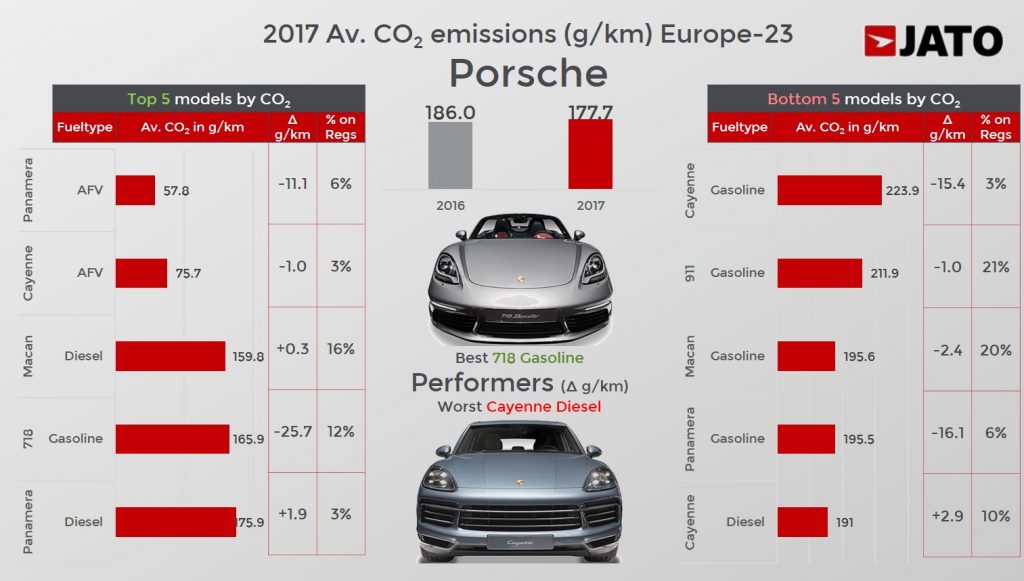 The big decrease seen at Porsche’s average is explained by lower emissions coming from the Macan gasoline (-2.4 g/km), the second best-selling car. The 718 gasoline also posted a big improvement (-25.7 g/km). Porsche is also improving thanks to the higher contribution of the hybrid version of the Panamera, which sold more than 4,000 units in 2017 and posted the lowest average emissions among all Porsche models. The focus on high performance cars means that 3 in 4 of the Porsches sold in Europe posted average emissions above 160 g/km. 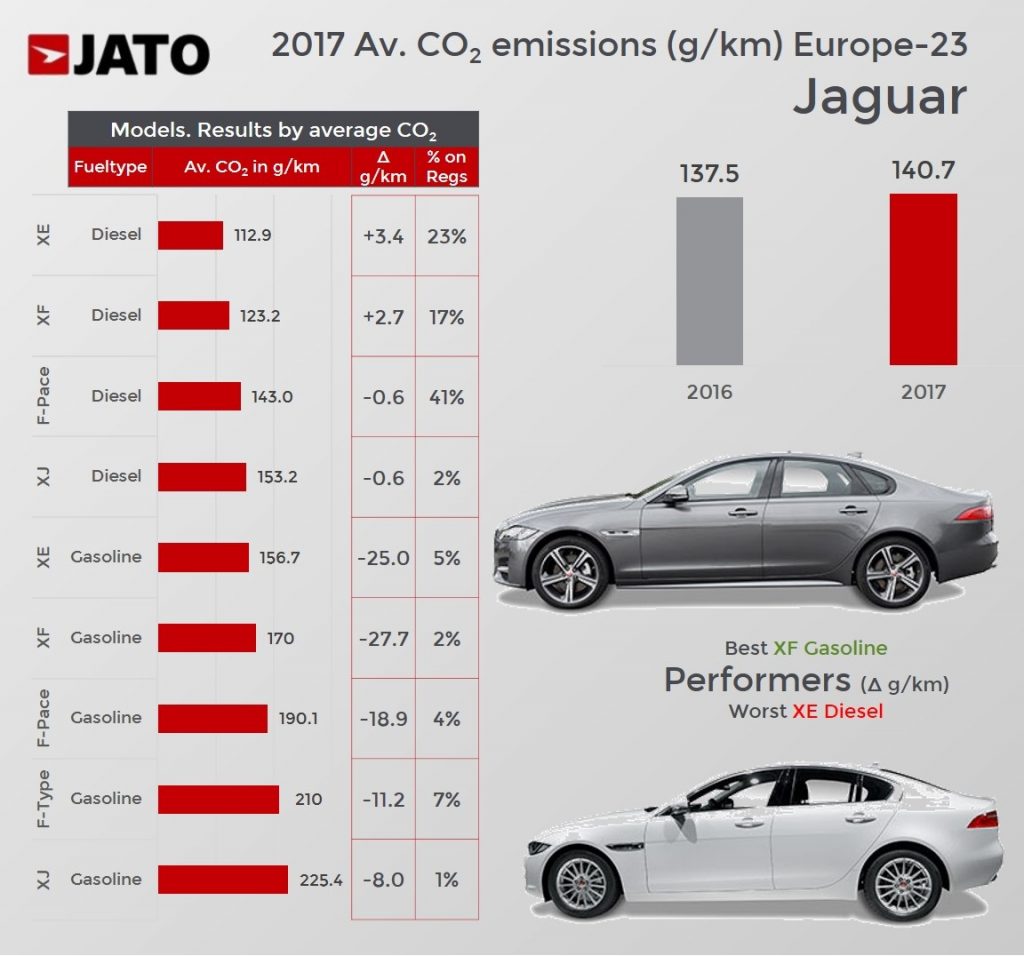 Jaguar’s increase is due to the diesel versions of the XE and XF, and not to the F-Pace, as anyone would think. While the compact SUV E-Pace hits the market, the brand is still strongly dependent on big sedans, so this explains why its average is so high.