EV prices have been growing during the last 8 years

The Electric Vehicle (EV) story usually features a lot of positivity. The continued strong growth in sales of EVs has caused analysts around the world to be optimistic about their future. The industry has improved a lot during the last 10 years, and this is reflected in the quality and performance of the cars. However, there are still big limitations regarding the price, which has not fallen as it should have. 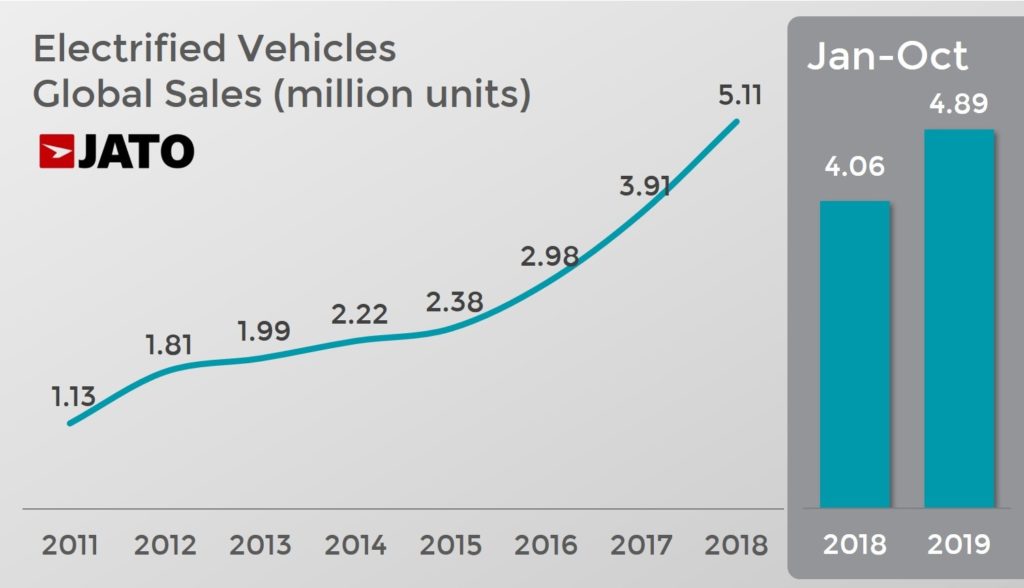 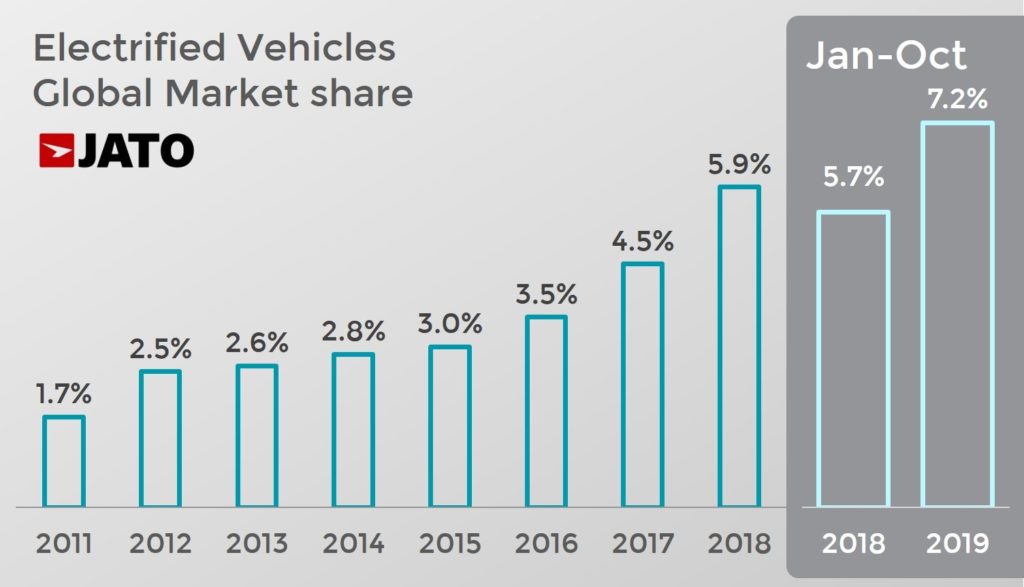 Ten years ago, SUVs took centre stage in terms of popularity and profitability. However, EVs have now taken the lead in terms of sales growth. Our data shows that their volume increased almost five-fold between 2011 and 2018, jumping from 1.13 million units to 5.11 million units. Despite the negative market conditions in the US, China and Europe, our data shows that 4.89 million EVs were sold between January and October of this year – an increase of 20% on the same period last year. 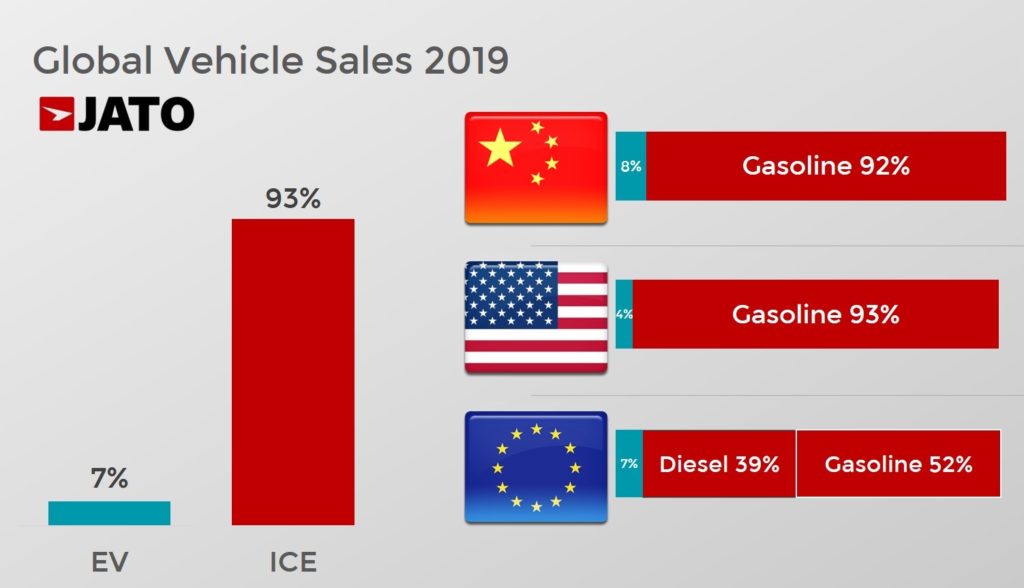 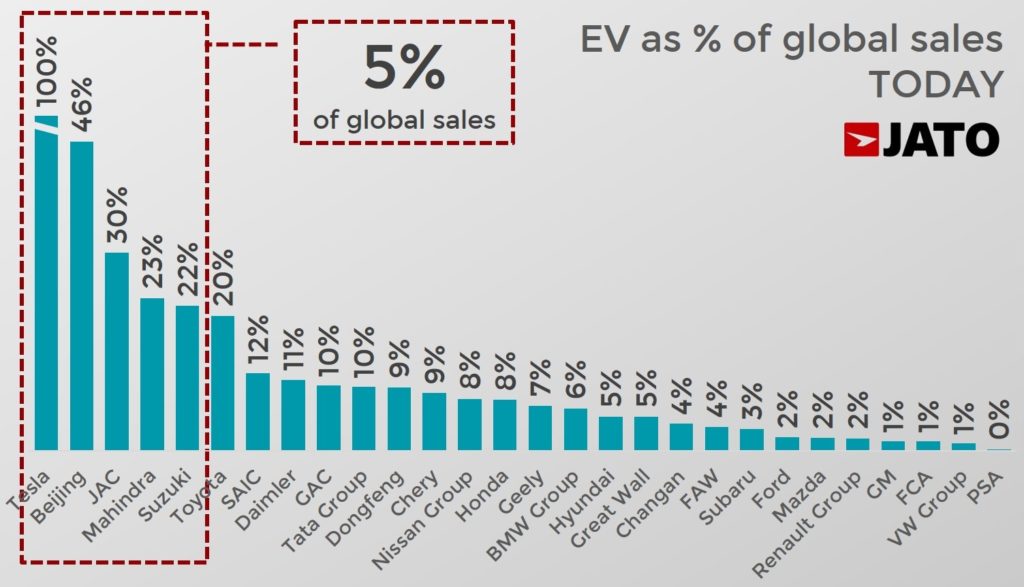 However, there is another side to the story. When compared to overall sales (ICE, EV, LCV and passenger cars), EVs are still a niche segment. Their market share totalled 7.2% through October this year, which although is a marked improvement on the 1.7% share recorded in 2011, is nothing compared to the 89% share recorded by Internal Combustion Engine (ICE) vehicles. This shows that most drivers around the world are still committed to petrol vehicles. 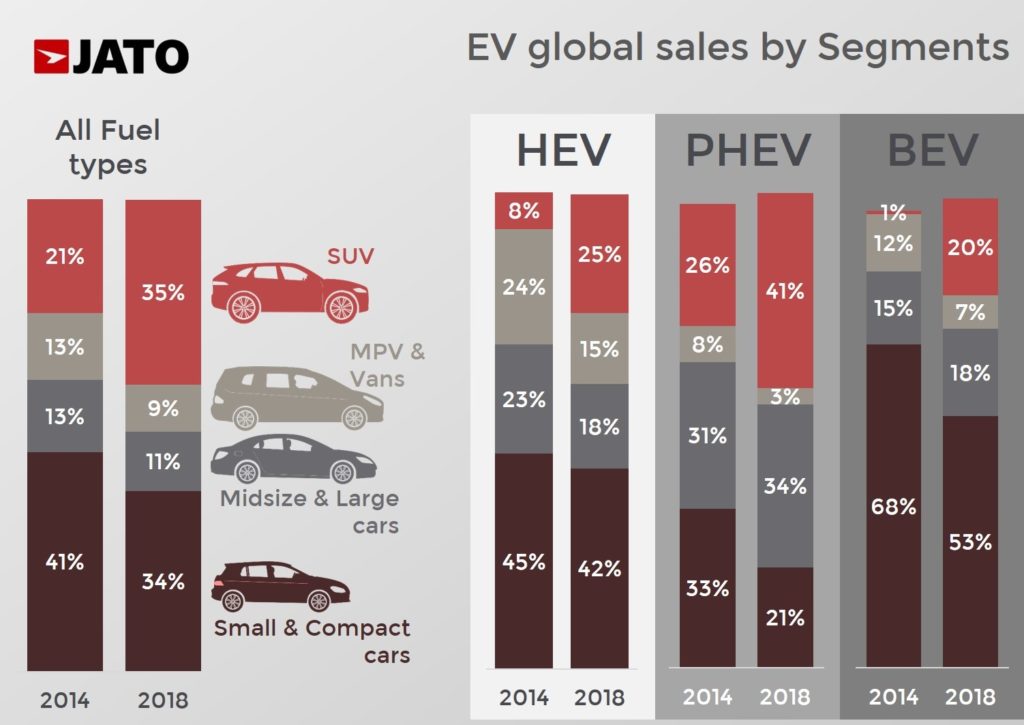 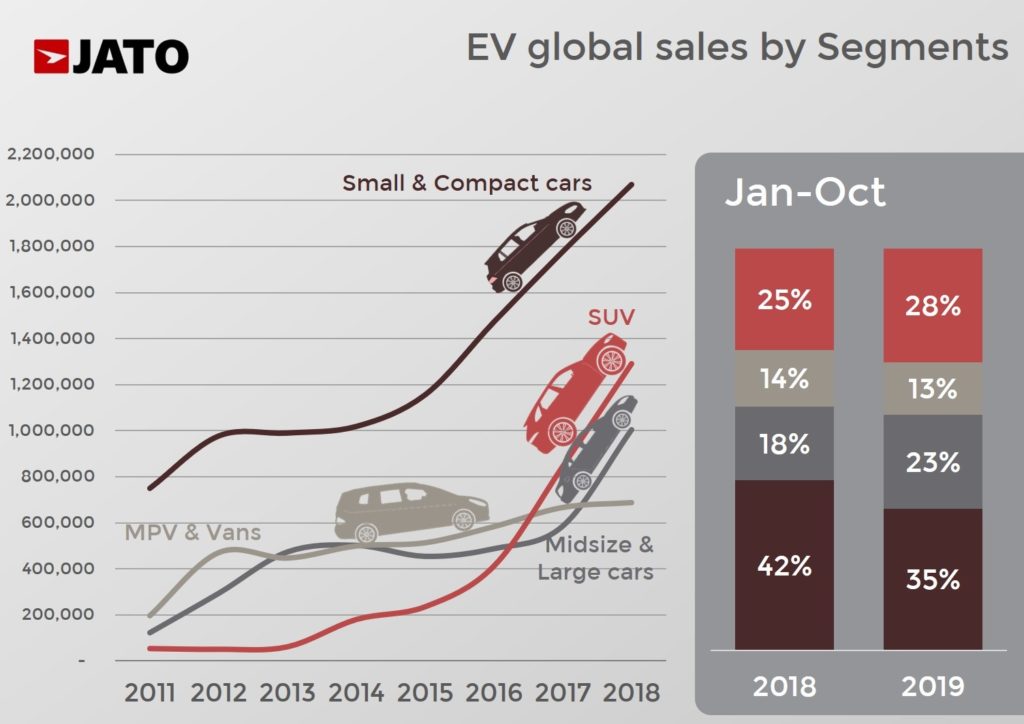 The limited role of EVs in the overall market is also evident when looking at their sales share across the world’s largest car makers. In contrast to the ambitious plans announced by the automakers for the coming years, the reality today is very different and, in some cases, worrying. For 18 of the largest manufacturers (including GM and Volkswagen Group), EVs count for less than 10% of global sales. On the other hand, the car makers with the best results represent 5% of global sales.

Another big disparity in the EV world is the small role that SUVs play. The popularity of SUVs has shown no signs of slowing down and, in the wake of increased concerns about the environment, consumers now want electrified SUVs. However, there is a gap in the market, with a limited array on offer. This is posing serious issues, especially when considering that what very little growth is left in the industry is being driven by SUVs. In other words, most car makers are not making use of the SUV boom to expand their presence in the EV world. 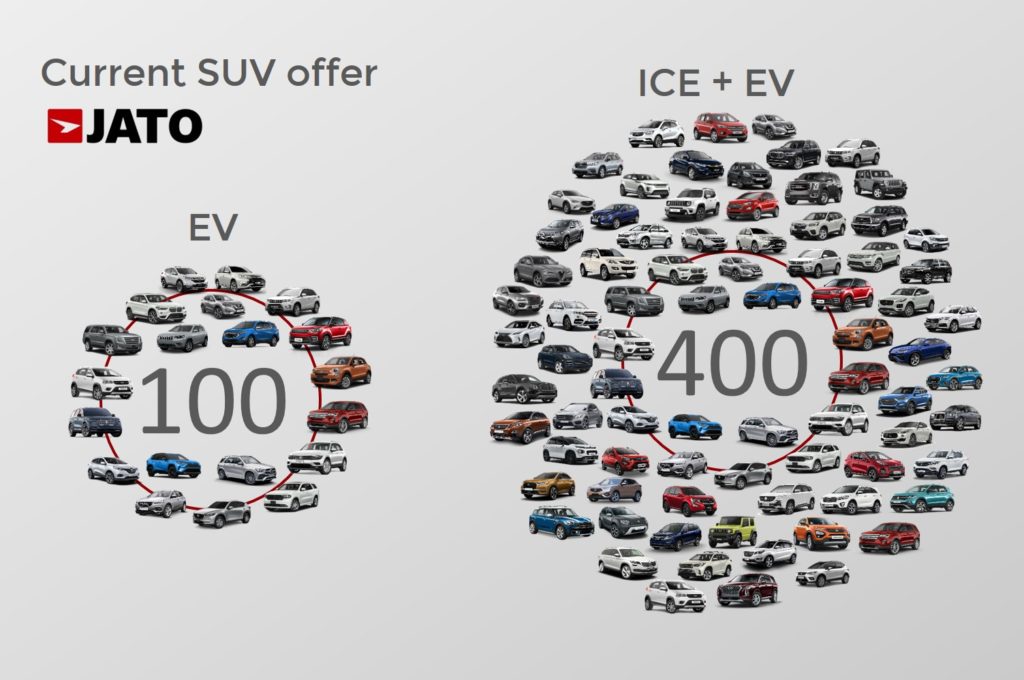 Most of the efforts so far for EVs have been focused on traditional cars: sedans in the US and small cars in China and Europe. In fact, the SUV offering is very limited with only 100 model/versions available right now in EV form, against more than 400 in petrol or diesel form. This is largely due to the large gap between the ICE and EV offering amongst all segments. There is also a difference when comparing the price, as most of the offerings in the ICE market are concentrated in the 10,000 – 40,000 euro (in the case of France) range, while the majority of the electrified vehicles are priced between 30,000 and 60,000 euros. 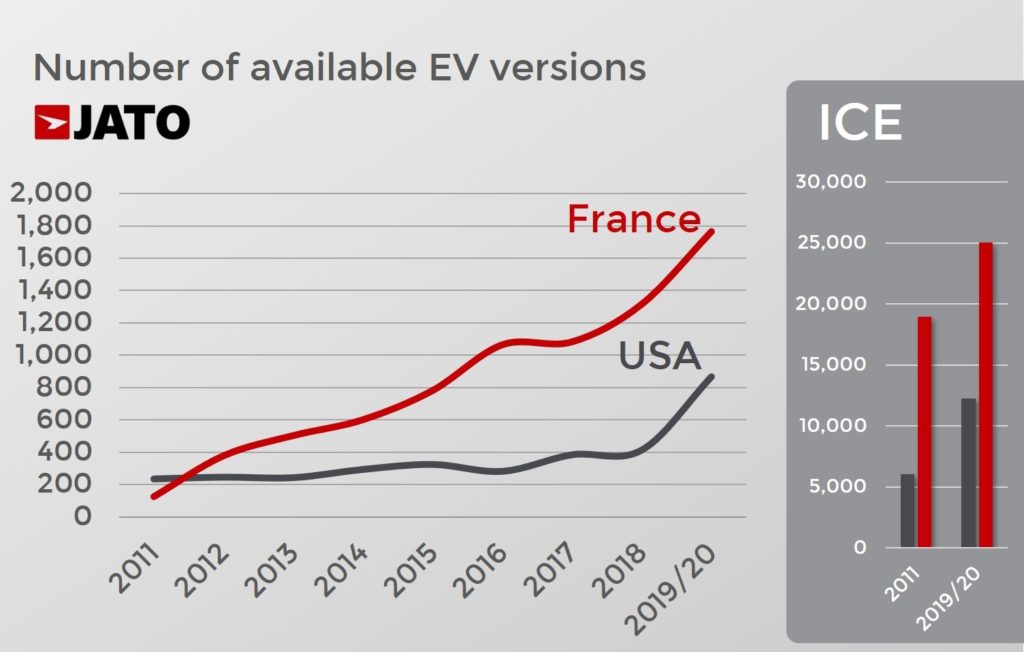 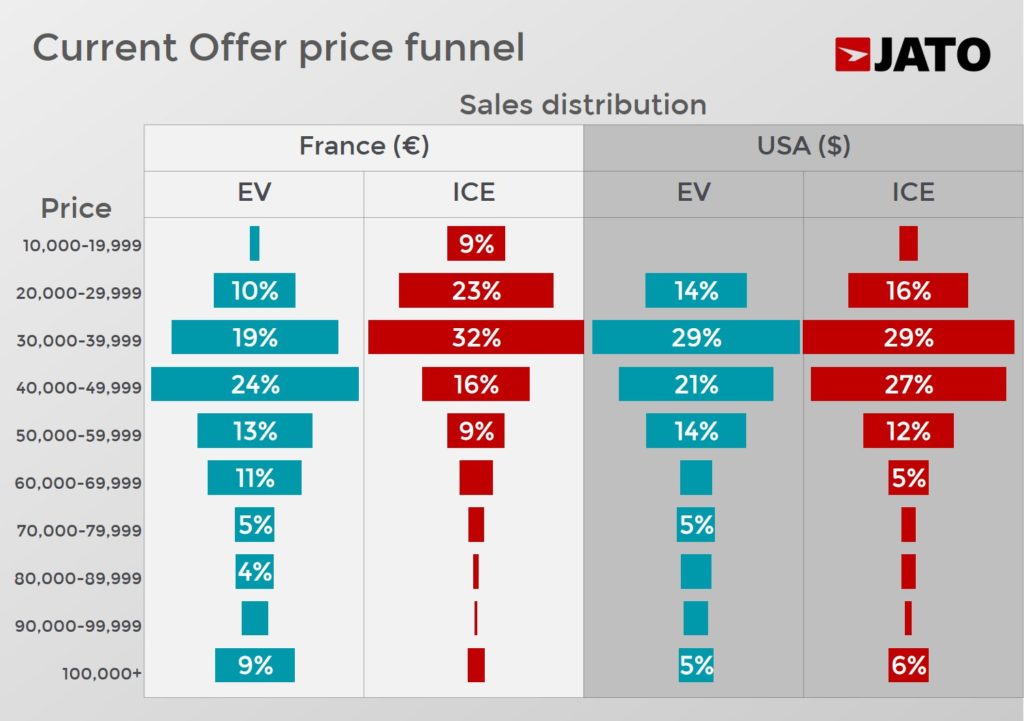 The price of electric cars is not falling

Perhaps the most worrying finding in the shift towards electrification, is that prices are not falling as expected. Our data indicates that China is the only market where pure electric cars became more affordable during the last few years. In contrast, the situation in the US and Europe is looking less hopeful. If the car makers and governments do not address this issue, EVs will continue to play a secondary role to ICE vehicles. 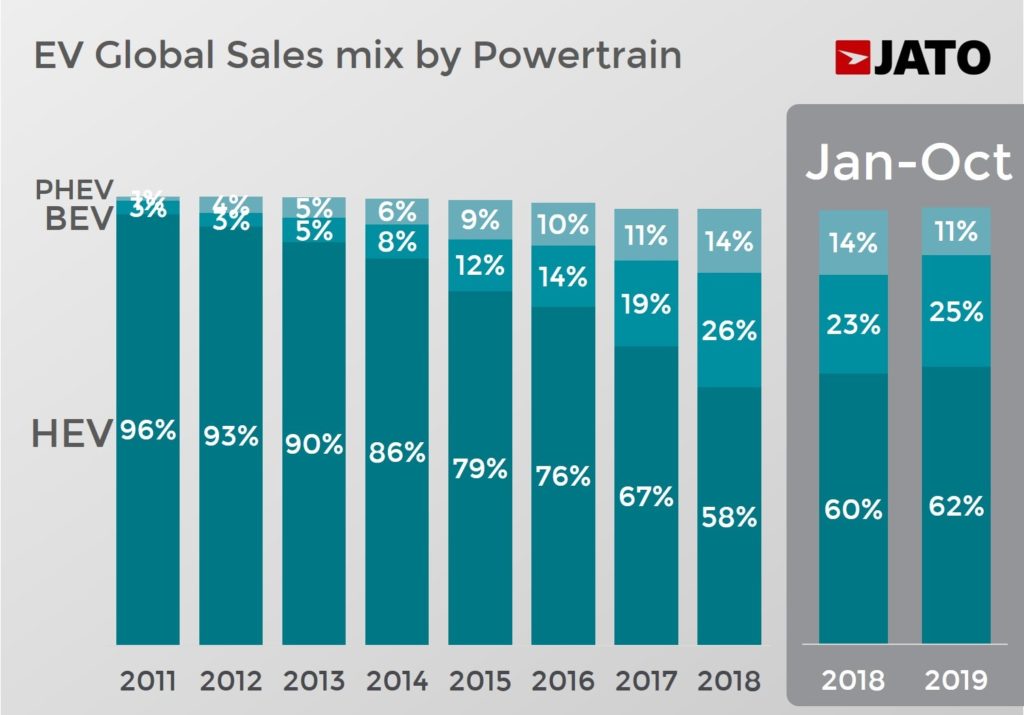 To put this price disparity in context, in China a Battery Electric Vehicle (BEV) costing the equivalent of $1 in 2011 would now cost $0.52. This improvement is mostly due to incentives granted by the central government, and the launch of electric city-cars and very cheap models. In addition to this, the manufacturers in China do not have to meet the difficult safety regulations imposed on their counterparts in Europe and the US. 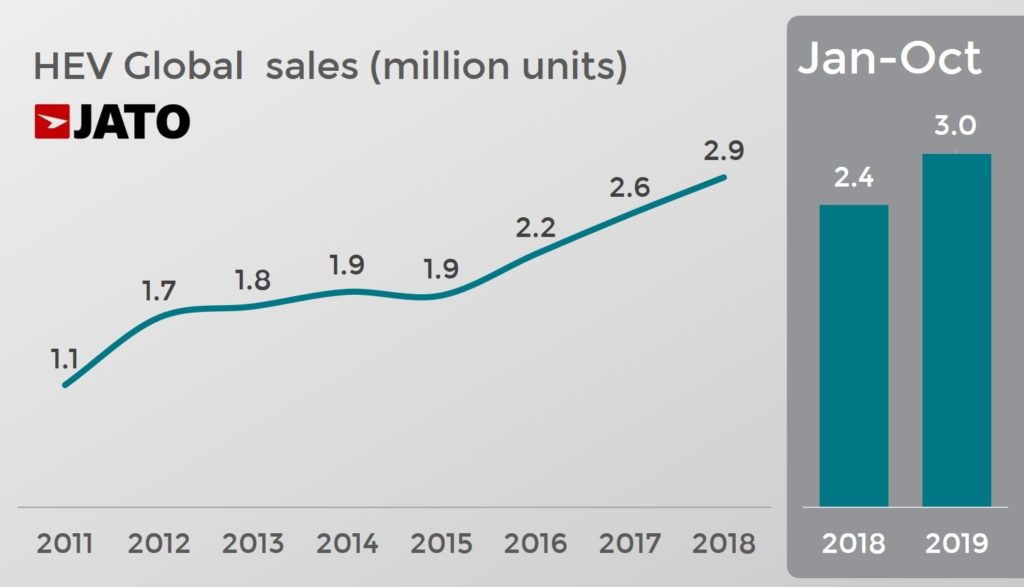 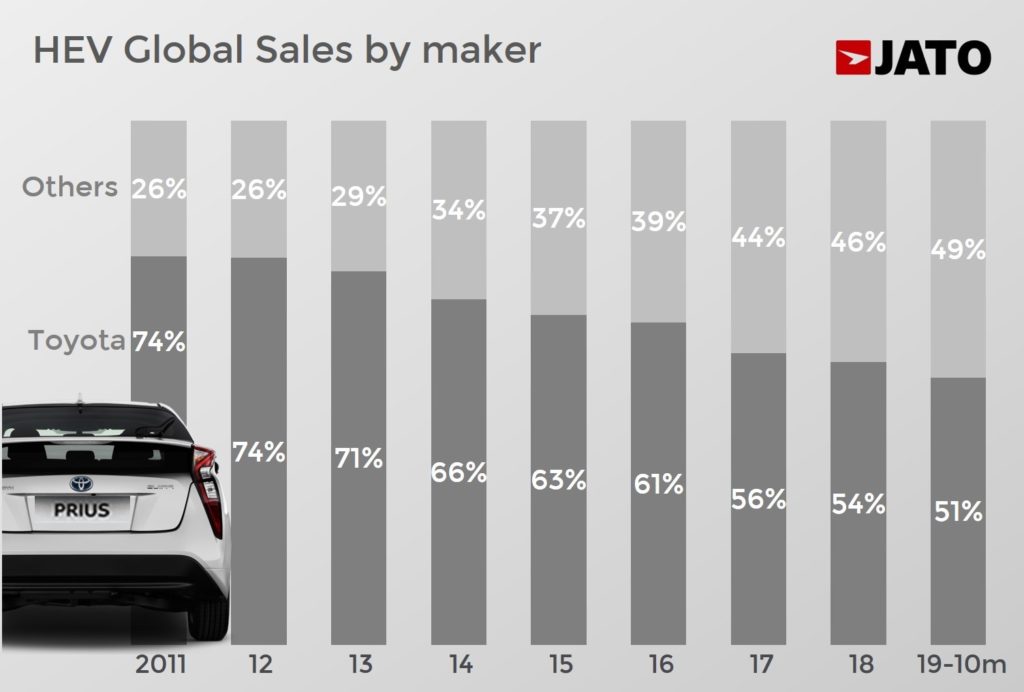 However, the situation in Europe and the US is the opposite. The same car priced at $1 in 2011 would now cost $1.42 in Europe and $1.55 in the US. While BEV prices have halved in China during the last eight years, they have increased by 42%-55% in the West. The focus of Western manufacturers has been on premium, more expensive cars. This leaves very few offerings in the entry-level segments. 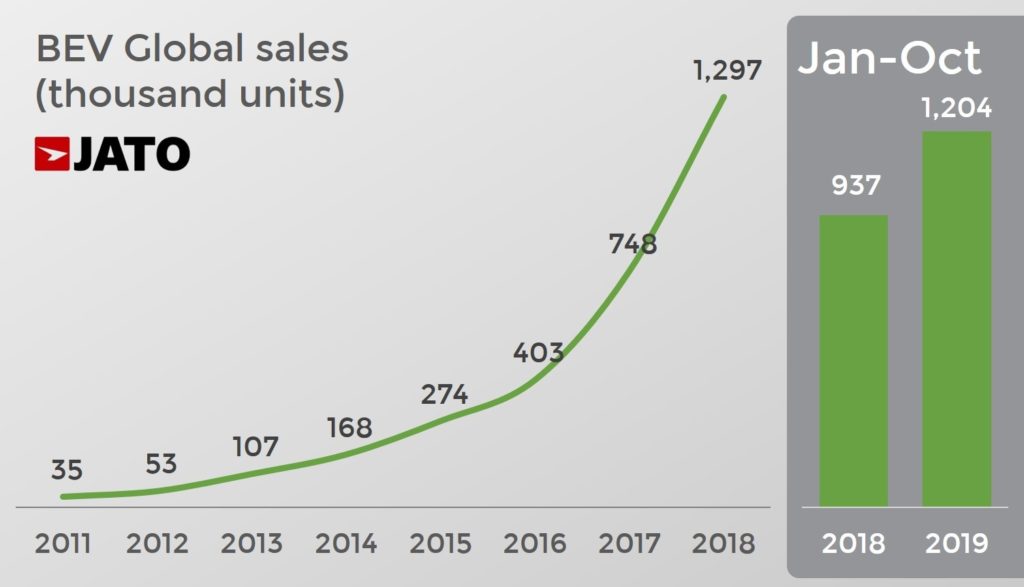 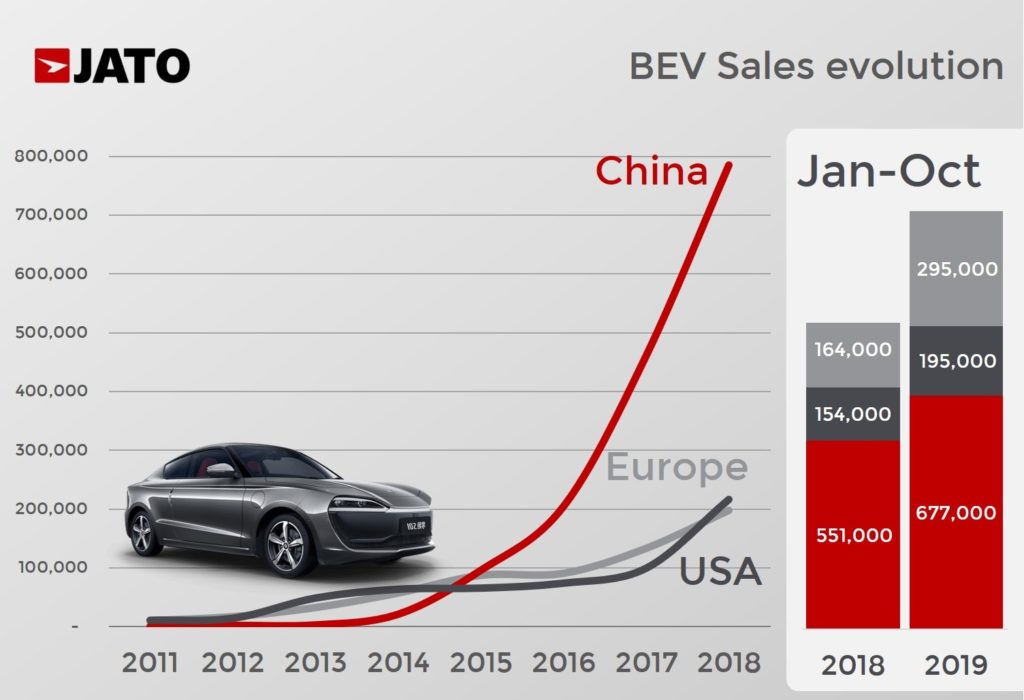 The historical data from our database also confirms this trend. By choosing representative samples (models and markets), our study concluded that in general terms, the price of certain models simply haven’t dropped. The retail price of a Renault Zoe in France (Intens version with 80 hp) in 2012 was 22,500 euro, which went up to 26,580 euro in 2019, with an improvement on its charging time. This was also the case of the e-Golf in Germany and the Leaf in the UK. Despite improvements in power, charging time and range, the high price of BEVs is still a barrier for consumer adoption. 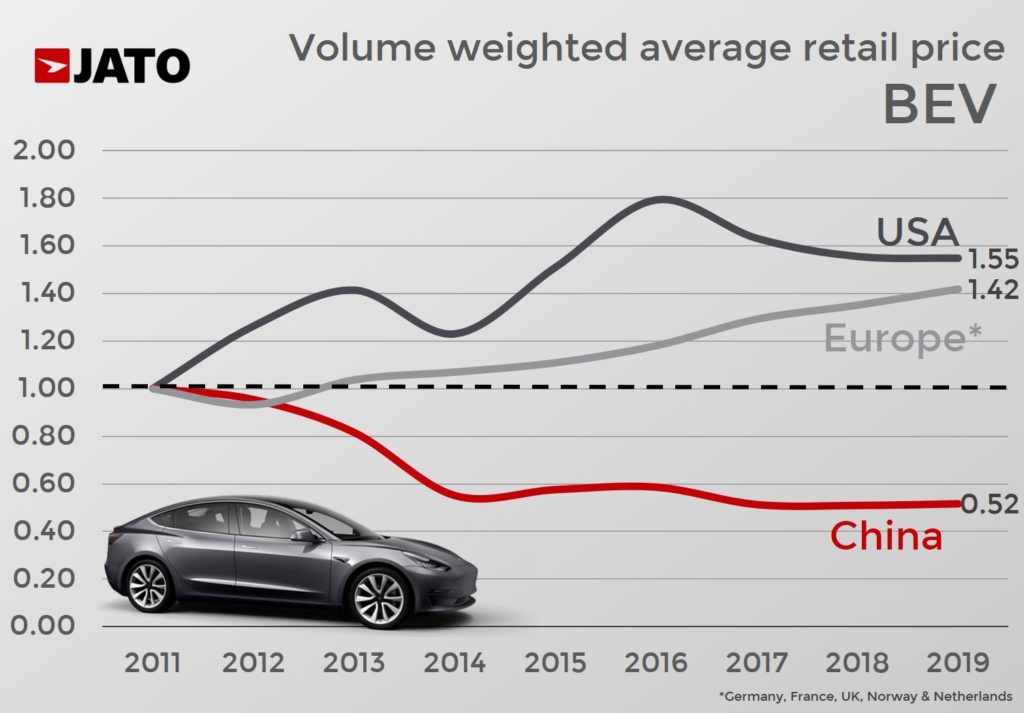 A BEV can be cheaper than an ICE car, but only in Norway

As prices of BEVs aren’t falling, the gap between them and ICE cars remains. This is particularly true in the US where the presence of Tesla premium sedans and SUVs has an enormous effect on the price difference. While the average retail price of the petrol/diesel cars sold through September was $35,970, their electric counterparts cost $51,691 – or 44% more. However, in Europe it is likely that prices will reduce due to the arrival of smaller cars like the Opel Corsa-e, Peugeot 208-e and the upcoming Mini electric and Fiat 500 BEV. 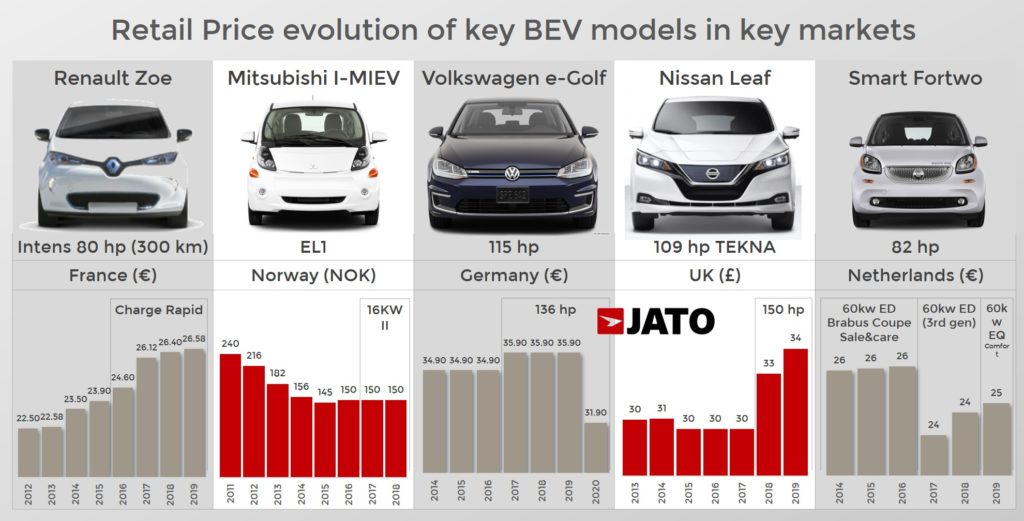 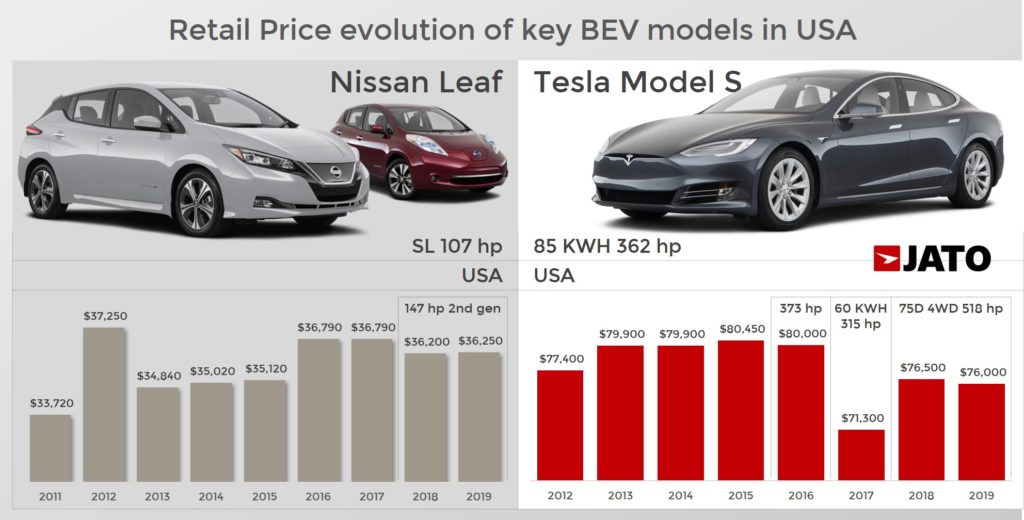 There is one exception: Norway. Our records showed that the average retail price of a gasoline/diesel car registered through September was 2,257 euros more expensive than the equivalent price for a fully electric car. It is probably the only market in the world where this happens and explains why EVs are so popular with Norwegian consumers. 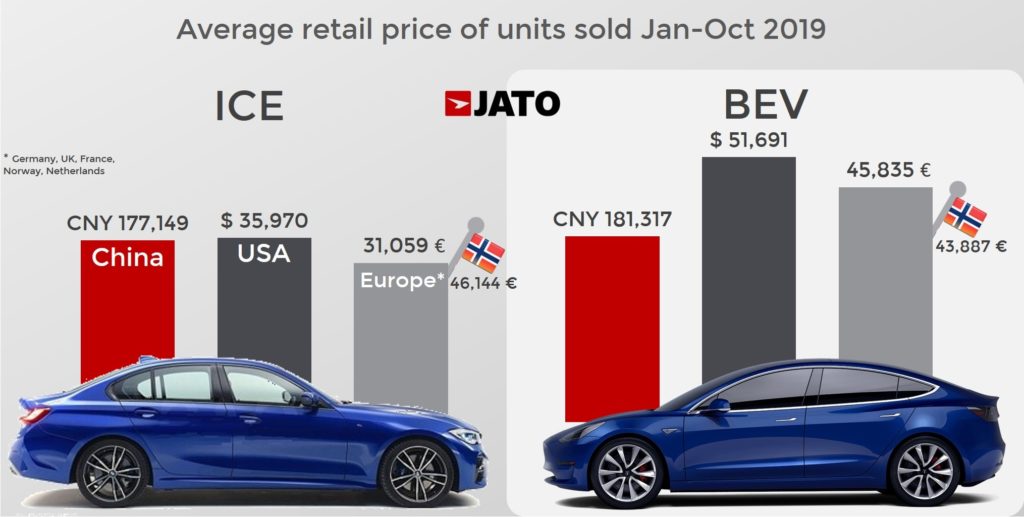 In order to encourage more consumers in Europe and America to switch to EVs, there must be more input from governments to reduce the costs of going electric. Car manufacturers must also listen to consumers and tap into the latest trends in vehicle models in order to motivate consumers into buying EV over ICE. Without making such changes, consumers are unlikely to change their behavior and choose more environmentally friendly options.