Felipe Munoz, Global Analyst at JATO Dynamics, commented: “Despite the efforts of national governments to boost consumer confidence, the impact of the pandemic is still being felt by the industry.” While volume increased in Norway, Croatia, Greece, Latvia, Romania, Estonia, Ireland and Lithuania,  this combined accounted for only 8% of total registrations during the month.

Appetite for EVs continues to grow, but is not enough to drive market growth

In contrast to the overall trend, consumers in Europe continued to buy more low emissions vehicles. In July, a total of 160,646 BEV and PHEV vehicles were registered, accounting for almost 17% of total registrations. This is the second highest monthly market share after June 2021, and the third highest ever in Europe – BEVs accounted for 47% of that total.

Munoz added: “Consumers continue to respond positively to the deals and incentives attached to EVs which have made these vehicles far more competitive in terms of their pricing. But despite becoming increasingly popular, consumer uptake has not been enough to offset the big drops posted by diesel cars.” JATO data indicates that between July 2019 and July 2020, the market share for diesel vehicles dropped by just over 2 points, while their market share dropped by almost 8 points between July 2020 and July 2021. During the same period, the market share for EVs grew by the same amount lost for diesel vehicles. 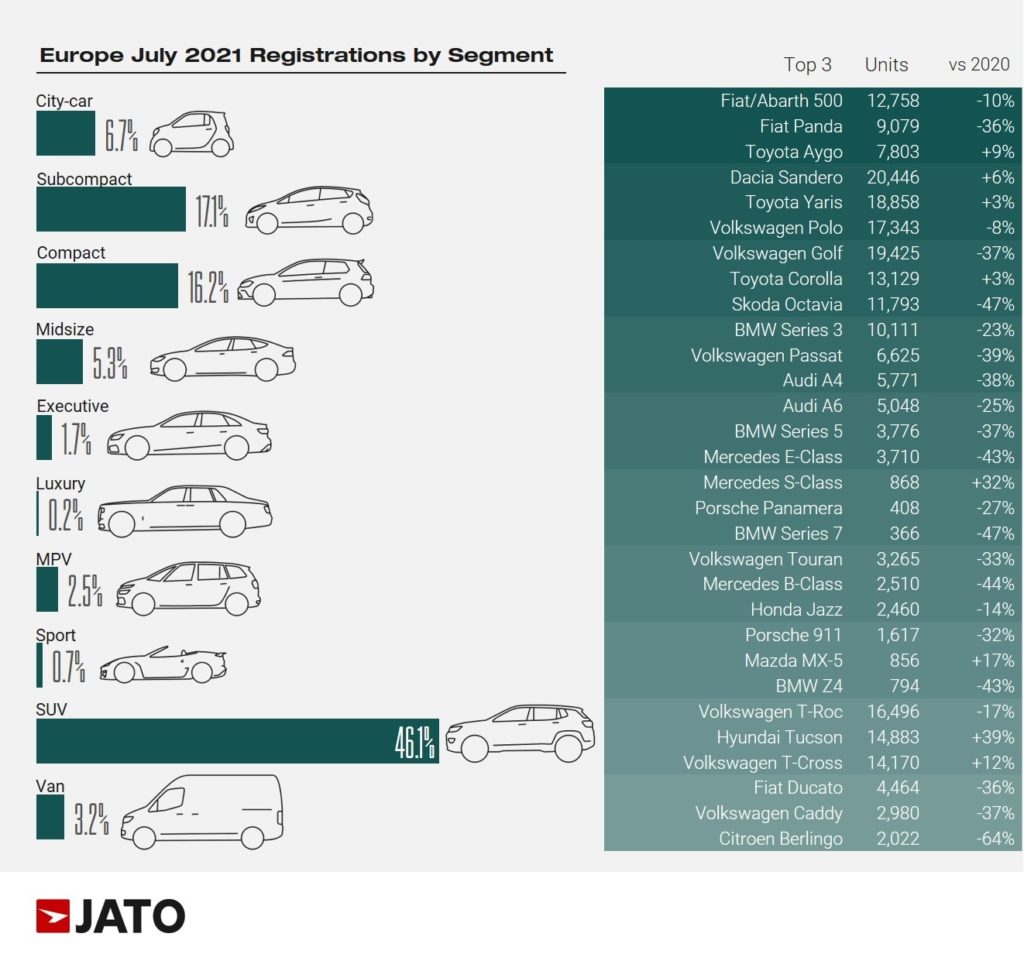 In July’s model rankings, the Dacia Sandero secured the top spot for the first time since its launch back in 2008. Thanks to the new generation, the subcompact posted significant gains in Germany (+15%), Romania (+24%), and topped the rankings in France and Spain – alongside being the 8th best-selling car in the year-to-date rankings.

The Sandero’s volume fell by only 2% compared to July 2019, while other leaders such as the Volkswagen Golf, Volkswagen Polo, Dacia Duster, Toyota Corolla, Volkswagen Tiguan, Opel/Vauxhall Corsa, Skoda Octavia, Peugeot 208, Mercedes A-Class and Renault Clio, posted drops between 17% and 52%.

Last month, there were also strong performances in the SUV segment as both the Hyundai Tucson and Ford Puma entered the top 10. JATO data shows that SUVs recorded the highest ever monthly market share in Europe during July at 46.1%. Although the registrations volume fell by 15%, these vehcicles gained market share at the expense of larger declines posted by the traditional cars (-28%), MPVs (-48%) and sport cars (-37%).