The brands better prepared for the SUV boom 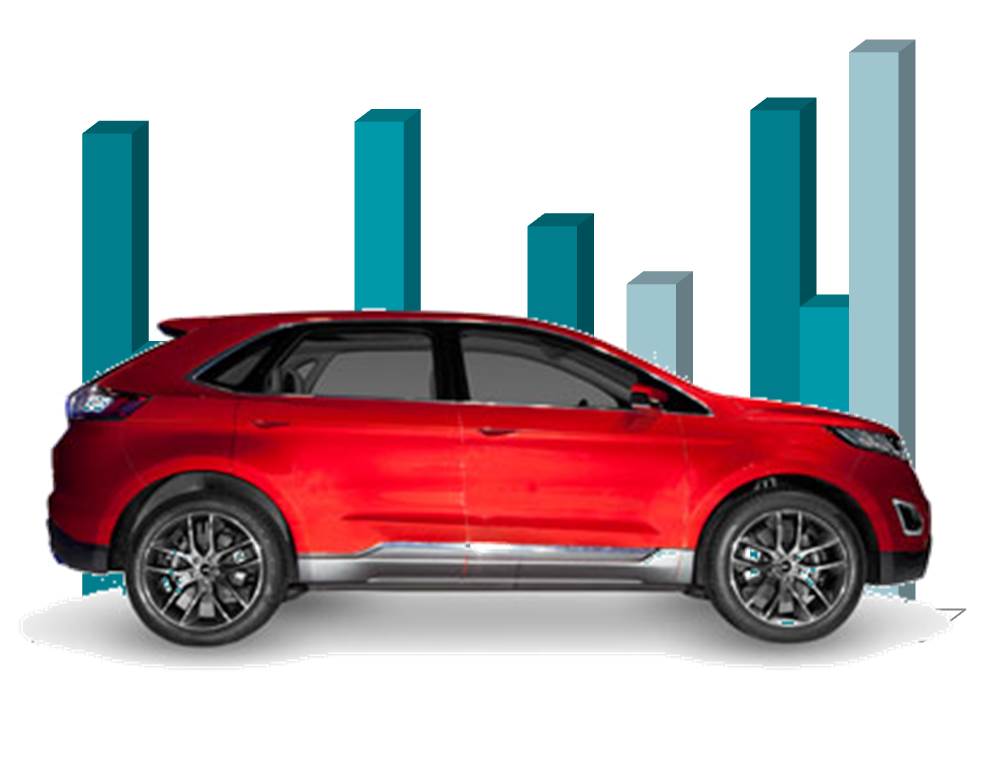 There’s is a close relation between the range composition of brands and their sales growth. When looking at the results for Q1 2016 (Global) and YTD May 2016 (Europe-29), the trend shows that the brands with a high SUV percentage on their sales volume posted higher growth than those that still focus their business on the traditional segments. This is another way of looking at the global SUV boom that’s been taking place in all regions. As it does not seem to be just a temporary trend, many car makers are changing their product plans in order to better respond to the consumers’ needs. A good example is what Peugeot just did with the new 3008, whose latest generation sits in the C-SUV segment and not in the C-MPV as its predecessor. Other cases include brands that were supposed to be untouchable like Maserati and Bentley. 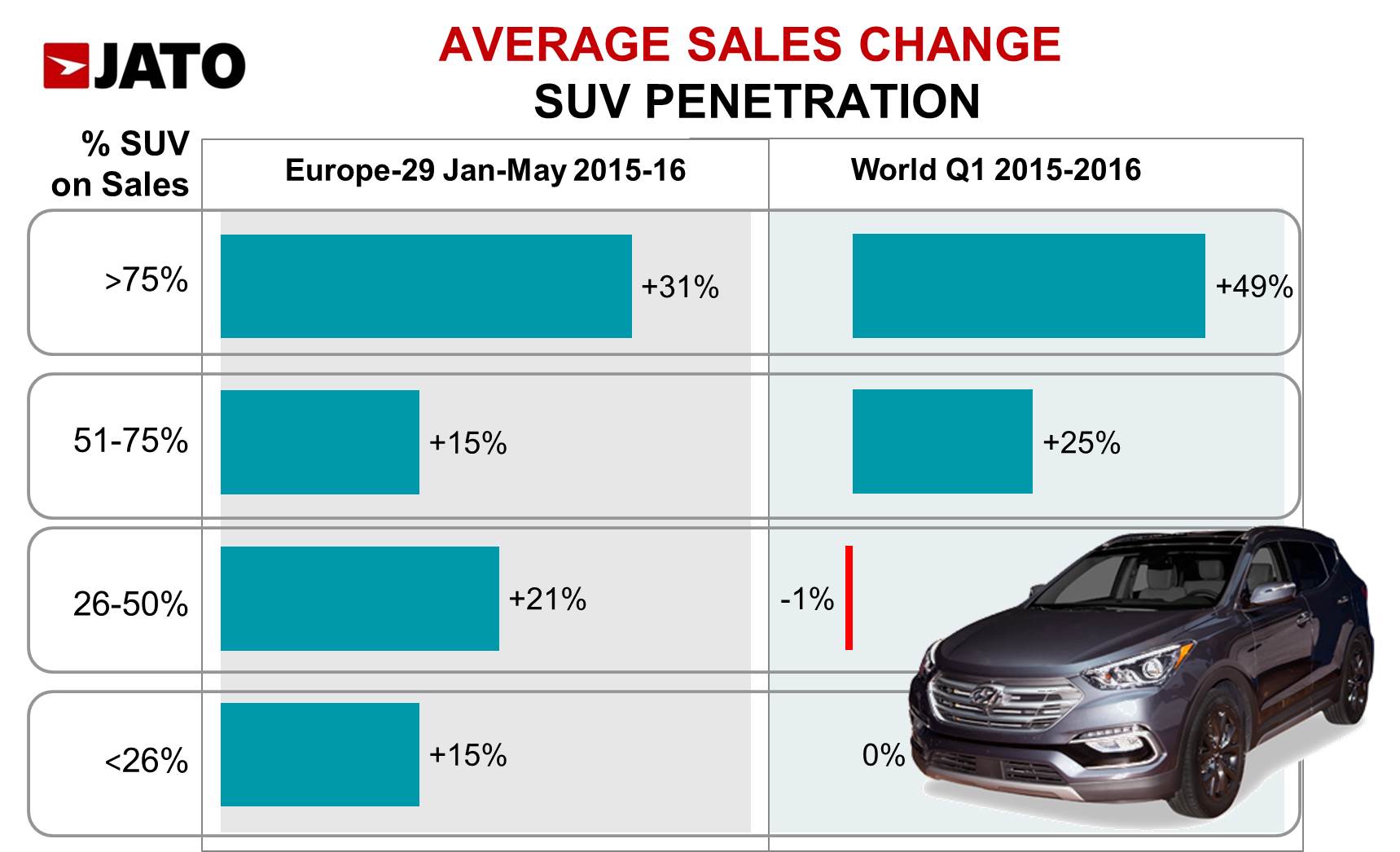 The data for the whole world during the first quarter of this year suggests that the brands whose SUVs counted for more than 50% of their sales, posted an average of 241% increase in their sales. This result includes the bumper sales posted by some Chinese car makers that recorded very little numbers in Q1 2015. If these “new arrivals” are excluded the average growth is still high at 32%. Instead of this, the average growth dropped to -1% for the brands with SUV counting between 25% and 50% of their sales. In the case of Europe, the Jan-May figures show that the registrations growth was 23% for those brands whose SUVs counted between 50% and 100% of their sales. Then the gain fell to 21% for the brands with SUVs share on sales between 25% and 50%, and +16% for the brands that were not really dependent on this segment.

It is important to mention the position of the world’s best-selling brands in this ranking. Volkswagen was the largest brand to post the lowest SUV penetration with this kind of vehicles counting for only 8% of its global volume. Currently the brand has only two SUVs in its range – Tiguan and Touareg – and both of them getting old (the numbers of the new Tiguan will start to have an effect in the second quarter). Fiat was close with only 10% of its global sales being SUV (500X), but unlike Volkswagen, SUVs share posted a big jump from 3% in Q1 2015. Toyota, the world’s best-selling car brand, was above with SUVs counting for 19% of its sales, but still below the world’s average of 27%. The Japanese brand has one of the widest range of SUVs (12 different models), but it still relies a lot on the success of the compact and midsize sedans Corolla and Camry. 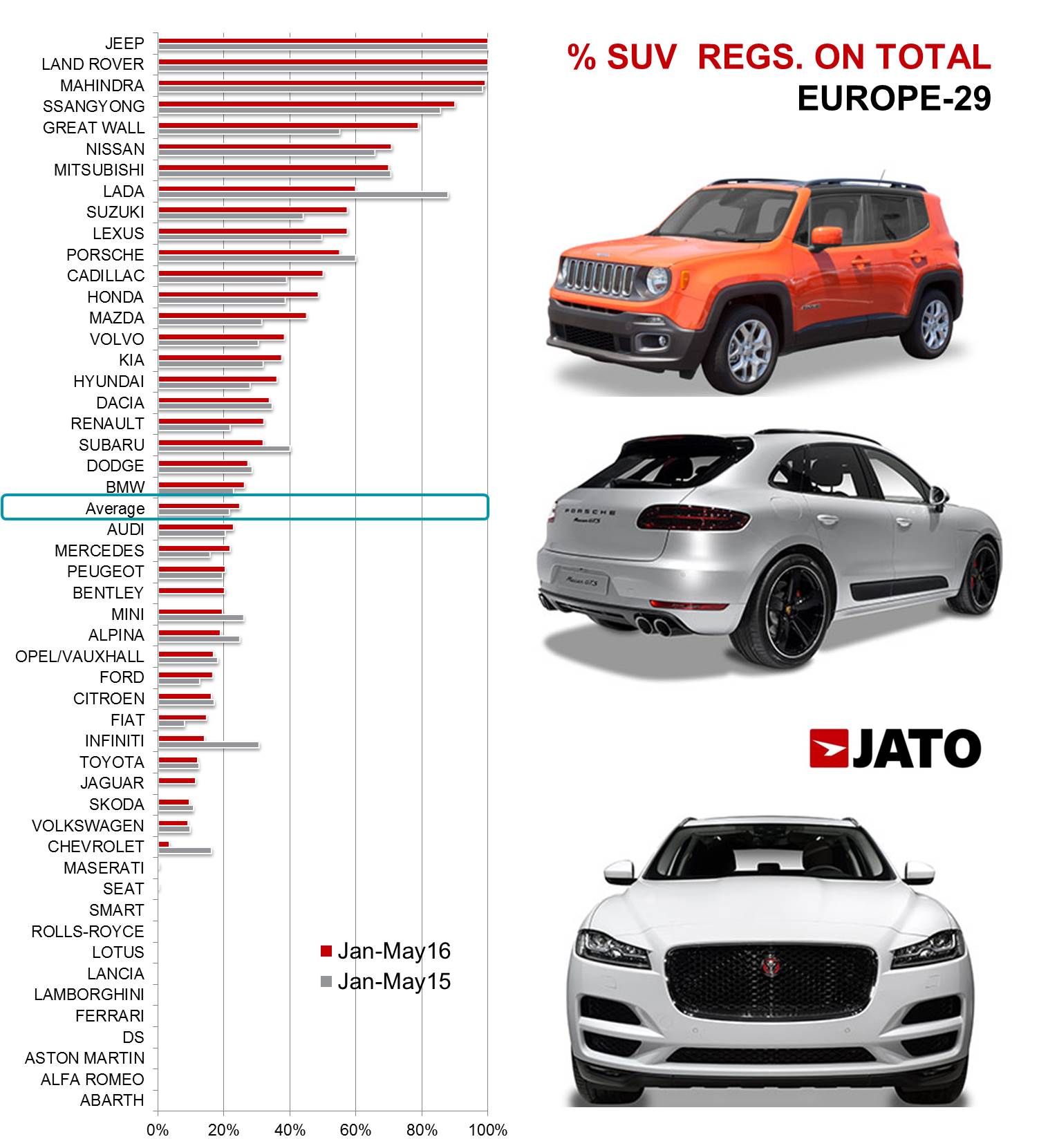 Only Honda and Nissan are among the major car brands to outperform the global average. The first one is helped by the enormous popularity of its HR-V (B-SUV) and CR-V (C-SUV). Both of them occupied the pole position in their respective segments, with the CR-V crowned as the world’s best-selling SUV. The case of Nissan is explained by its big range of SUVs (13 models) and the success of the X-Trail, Qashqai and Juke. In some markets the Qashqai has completely overshadowed the regular compact car from Nissan (the Pulsar in Europe, for example). But SUVs were also important for the best-selling premium brands. BMW’s X range counted for 31% of its global sales (26% in Q1 2015), while the Q family represented 30% of Audi sales (28% in Q1 2015), and the G family’s share was 29% of the brand’s total (22% in Q1 2015).

The European new car market recorded the lowest level for the month of May since 1985, excluding May 2020, when the… https://t.co/EM8kO1Wdf1