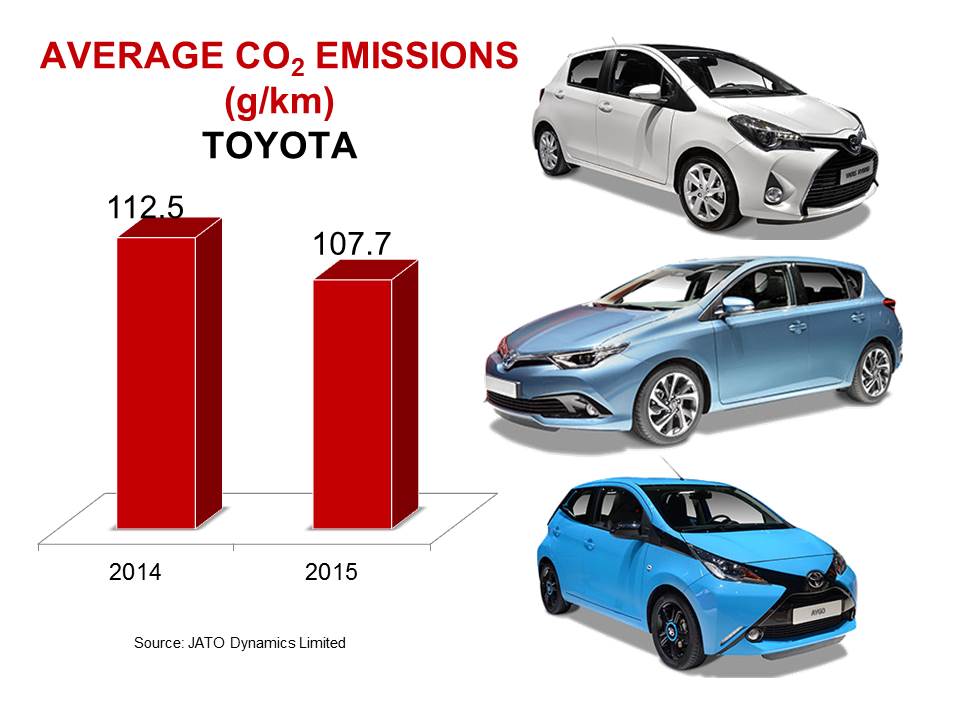 Toyota, the world’s largest car maker, was the brand to post the fourth lowest average CO2 emissions in Europe in 2015. When comparing to 2014 table, it didn’t change its fourth place but posted a decent improvement falling from 112.5g/km in 2014 to 107.7g/km one year later. This reduction in the average helped the brand to move further ahead of Nissan, the next in the ranking. Toyota’s improvement happened after it registered a registrations increase of 6% over 2014 results in the 23 markets analysed. Thanks to its best-selling models, this car maker came close to Renault, third in the ranking and confirmed the impact its hybrid technology can have on improving its emissions.

Last year Toyota’s hybrid models counted for 28.5% of its sales in Europe, and posted an annual increase of 15%. This was certainly one of the main reasons for Toyota’s improvement. The Yaris – its best-selling model – did not only post an overall sales increase of 8.4% over 2014 results but its average emissions dropped by 5.8g/km, from 101.2g/km in 2014 to 95.4g/km. The hybrid Yaris counted for 37% of its sales in Europe and its average CO2 emissions fell from 79.6g/km in 2014 to 77g/km in 2016. However diesel and petrol engines posted even better improvements. It was also the case for the Auris, the second best-selling Toyota in Europe. While its diesel and petrol powered versions posted sales declines, the hybrid ones managed to increase their registrations by 11% posting an average CO2 emissions of only 87g/km.