The 2018 Paris Motor Show comes at a time when the European automotive industry is facing three major challenges: the introduction of WLTP, trade tensions in the US, and the outcome of Brexit negotiations. How quickly the market continues to grow will depend on how quickly it adapts to the knock-on effects caused by these factors.

In the face of these challenges, car makers have been relying on the SUV boom to maintain growth, which is unsurprising given that SUVs have been the only significant driver of growth in the market for many months now. And although there are concerns over the segment showing one of the largest discrepancies between NEDC tested and correlated values, carmakers are continuing to build their SUV offer by launching more affordable SUVs at the bottom of the segment, and lighter and sportier models at the top of the segment.

This report uses the latest JATO performance data to analyse the biggest new launches by segment but has opted not to include August’s registration figures in order to present a clearer and more accurate picture of the European car market’s current situation. Results from August 2018 were an anomaly, after being strongly impacted by the increase in consumer purchases ahead of the September deadline to register vehicles under NEDC testing procedures, before WLTP testing came into effect.

So, the 2018 Paris Motor Show, which is a key event in the automotive calendar, comes at an interesting time for the industry. The show will announce the arrival of the big premium car makers to the electric vehicle market, with particular excitement surrounding the reveal of the Mercedes EQC and Audi e-Tron. In fact, the majority of the show’s launches will be from premium makers, giving them more visibility over mainstream counterparts. The show is also expected to confirm that the SUV boom isn’t slowing down anytime soon, as the segment will dominate the new presentations.

SUVs will be a key player at Paris Motor Show. Eight of the 13 models featured in this report and set to be unveiled in Paris are SUVs. One of them is the DS 3 Crossback – the most important French launch in the show. This follows on from the launch of the DS 7 Crossback last year, which came as a result of DS struggling to see growth with its passenger car range, but the success of the launch brought an end to the brand’s monthly declines. The DS 3 Crossback will sit one segment below the DS 7 Crossback and mark an entrance into the premium B-SUV segment for the French maker, meaning it will face tough competition from the Audi Q2 and Mini Countryman. 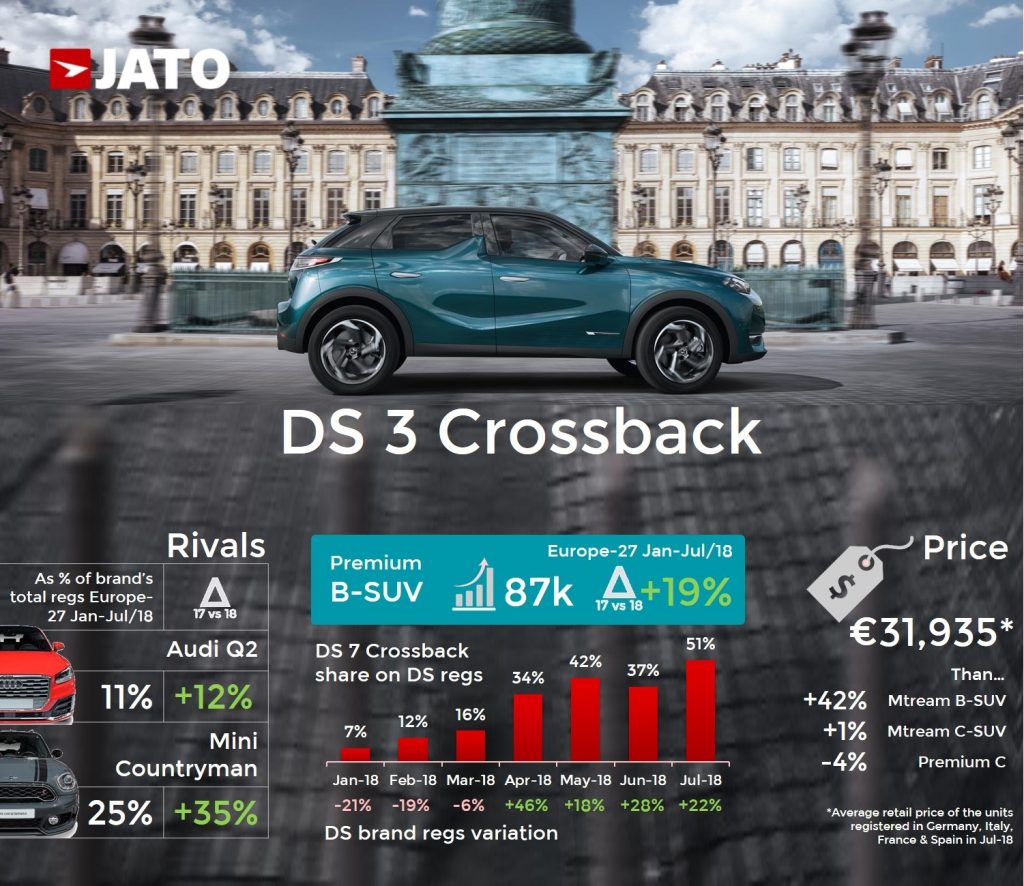 Elsewhere, on the mainstream side, Suzuki will introduce the new generation Jimny, which will become one of the only small SUVs to feature 3-doors – a move that bucks the market trend for 5-doors. As the SUV segment continues to grow, the Jimny could fuel anticipations for a future A-SUV, or city-SUV segment. 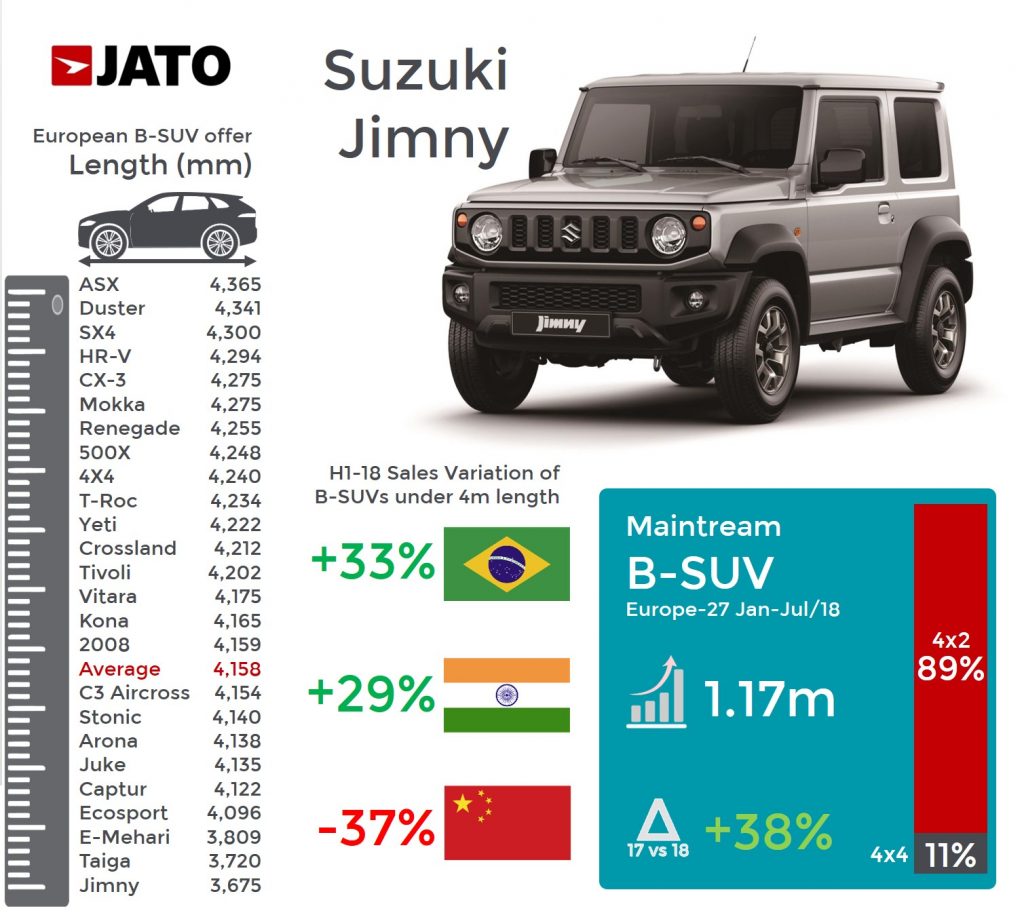 Audi will present the second-generation Q3 in response to the popular second-generation BMW X1, which was introduced in 2016. The Q3, part of the premium compact SUV offering at the show, is a key model for Audi, having sold more than 1.6 million units since its introduction in 2011 and was Audi’s 5th bestselling model in H1 2018. It was helped by playing in a segment that has seen steady growth everywhere – even in Europe, where the diesel crisis hasn’t affected its commercial performance. In contrast to the general market trend, diesel registrations for premium compact SUVs grew by 6% during the first seven months of this year. 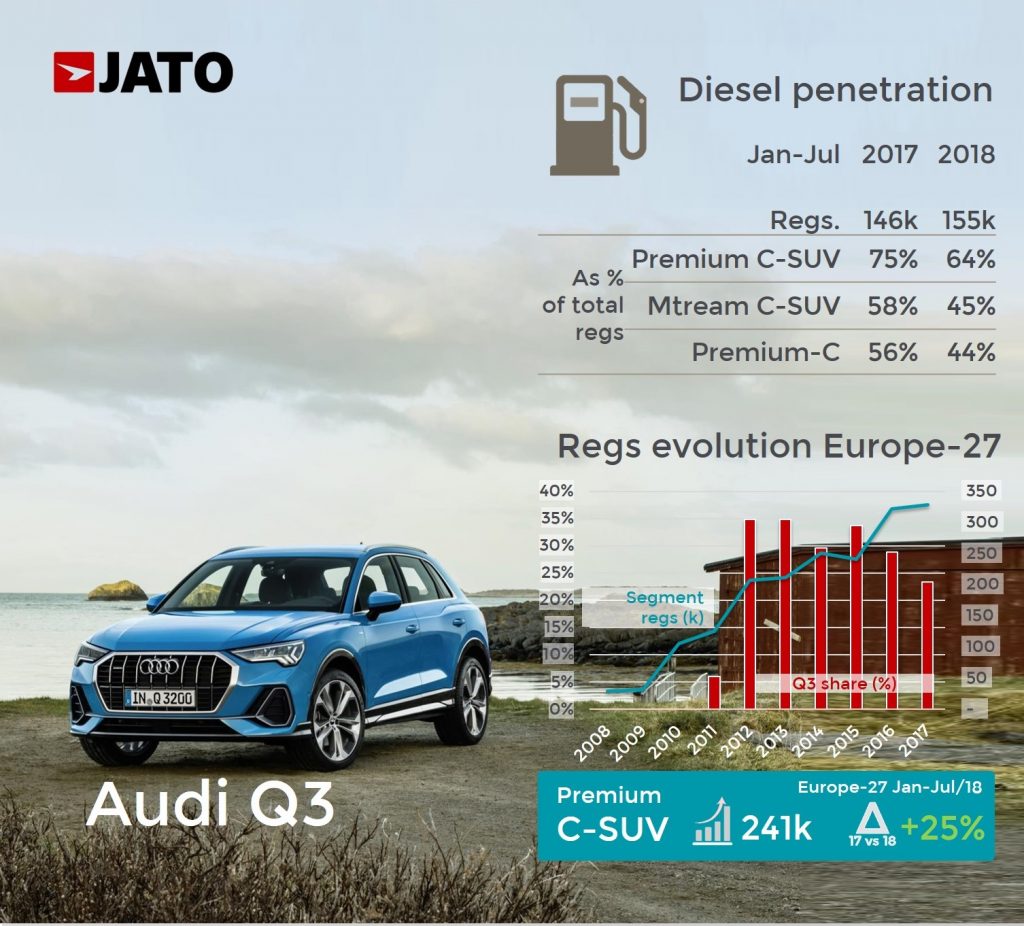 The launch of Seat’s third ever SUV, the Tarraco, a 3-row mainstream D-SUV, is expected to rival the Nissan X-Trail and Peugeot 5008 and increase VW Group’s presence in the segment following the success of the Volkswagen Tiguan Allspace and the Skoda Kodiaq. The launch follows on from the Spanish brand’s strong results from the Arona and Ateca, which counted for 31% of Seat’s global sales in H1 2018. 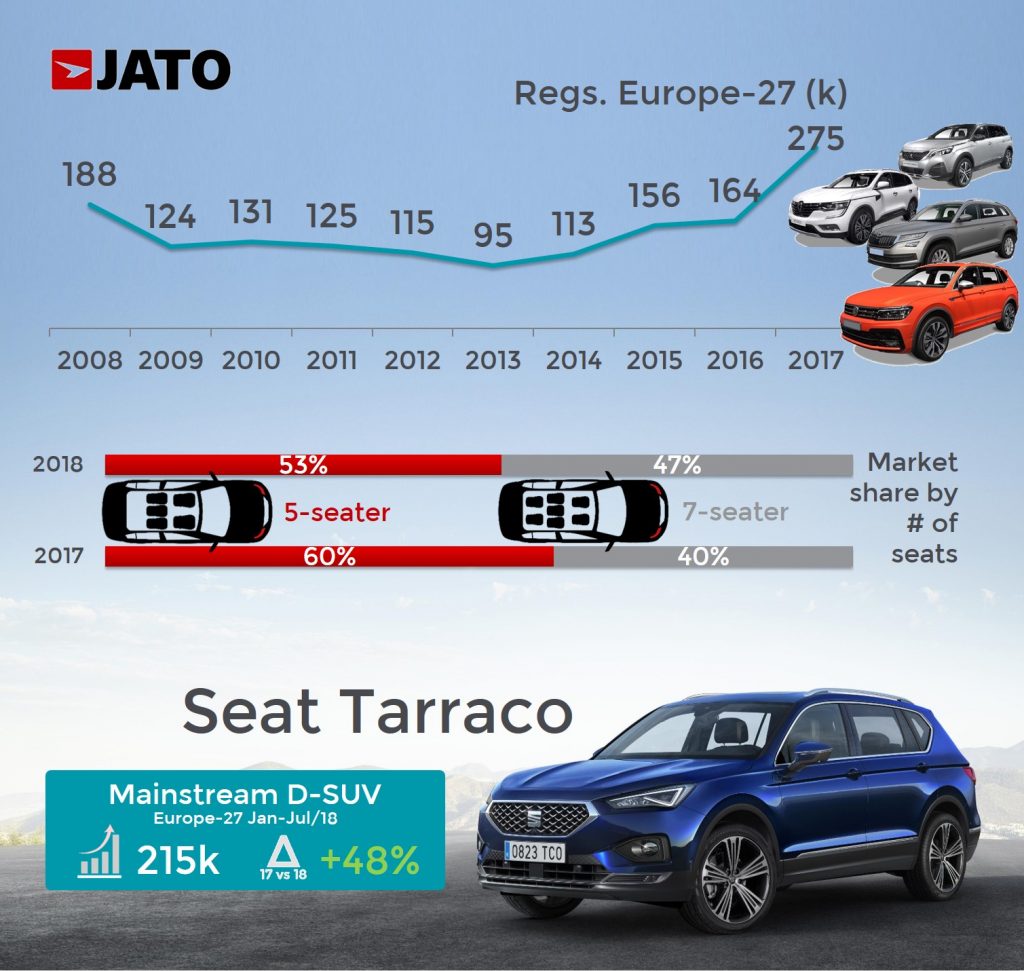 Above the midsize SUV segment, BMW and Mercedes are also breaking ground in the big SUV segment. They will present the new generations of the X5 and GLE, respectively. The two models will enter the market as rivals and hit the segment when it is not performing well. This can be explained in part by its poor offer of alternative fuel options. However, the new arrivals are set to change this. These new big SUVs will compete with the Cadillac XT5, Volvo XC90, Audi Q7, Lexus RX, Maserati Levante, Land Rover Range Rover, among many others. 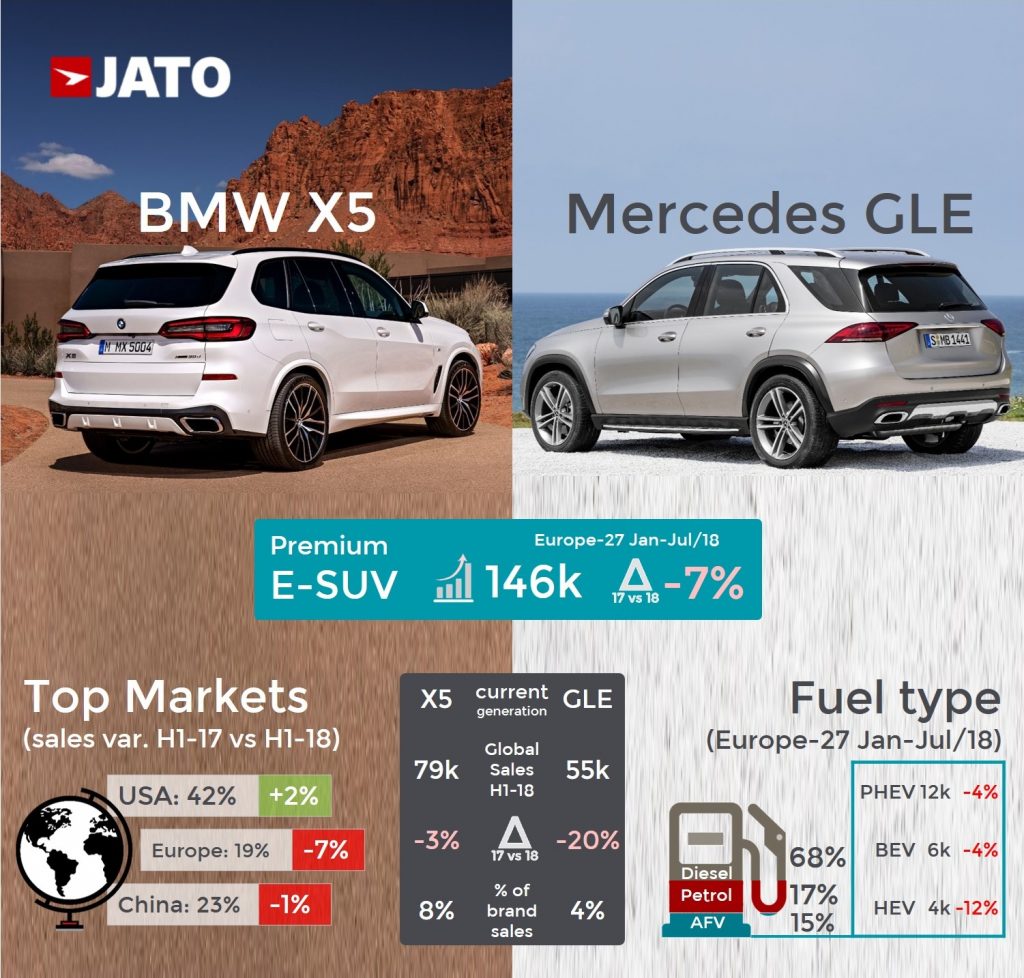 One of the major headlines from the Paris Motor Show will be the arrival of the big premium car makers to the electric vehicle market. Both the Audi e-Tron and the Mercedes EQC are the first standalone fully electric models of the brands and their arrivals mark a big moment for the electric market. As premium globally recognised brands, Audi, BMW, Mercedes and Jaguar are finally showing consumers that electric cars can be a reality and they are as good, or even better, than diesel or petrol counterpart models. Importantly, their arrival also dispels any doubts over battery or quality issues. The EQC and e-Tron will sit in the premium midsize SUV segment, next to their combustion engine siblings – the GLC and Q5. 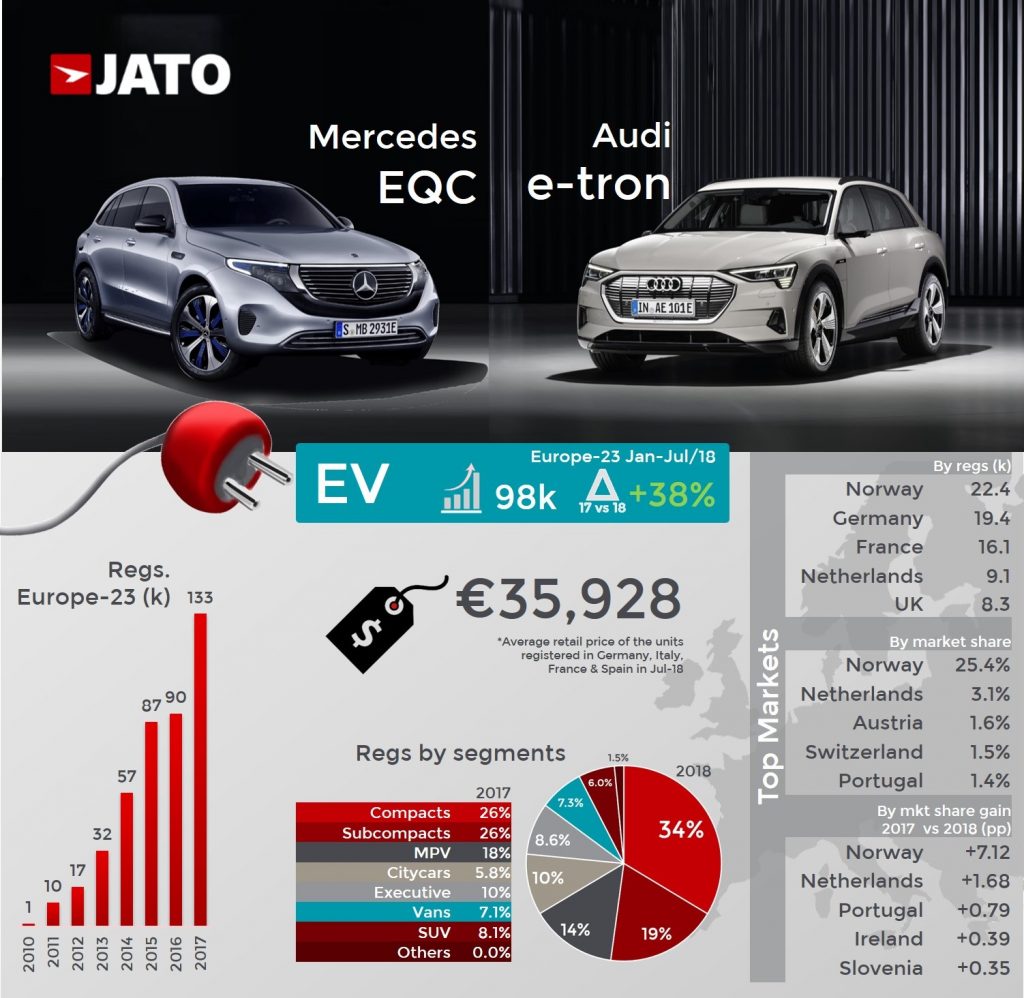 Among small cars, the new Audi A1 will be the most important launch. The German brand will present the second generation after selling more than 870,000 units of the current model, which was first introduced in 2010. Despite the A1 not being one of Audi’s key players, counting for just 5% of global sales, it is an important model for the brand. The A1 is a strong performer in a segment that is still popular in Europe and it also offers an alternative to the rival Mini hatchback. Unlike the Mini and its predecessor model, the new A1 will only be available as a 5-door car. This comes as a result of the 3-door version losing ground over recent years, with results through July 2018 showing that the 5-door version counted for more than 85% of the A1’s total sales, in contrast to the segment’s average of 48%. 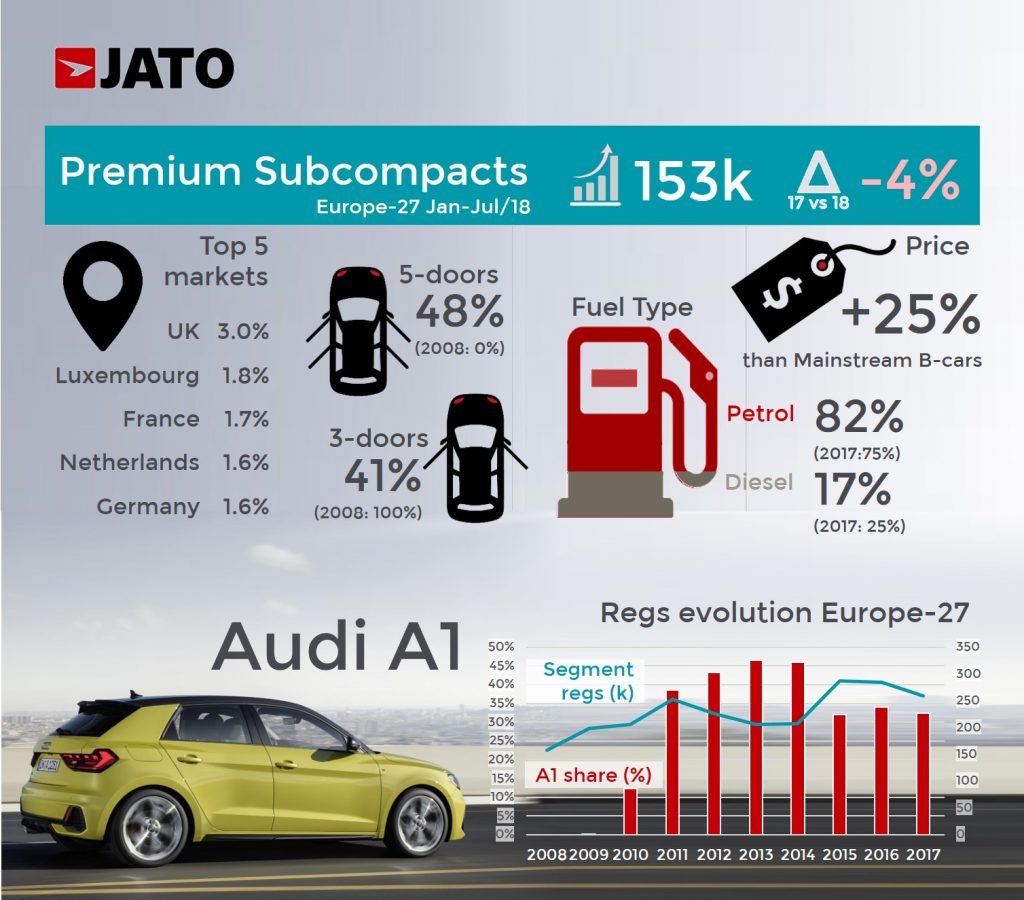 The compact segment will welcome two different models. Toyota will present the new Corolla Touring Sports, which is the replacement for the Auris Touring Sports and marks a new SW generation of the model. The Corolla Touring Sports’ hybrid engines will be its best opportunity to face off competition from the likes of the popular SW versions of the Skoda Octavia, Volkswagen Golf and Ford Focus. The compact SW is still a valid option for consumers with families, who are looking for larger vehicles with more space. In fact, as demand continues to shift from mainstream compacts to SUVs, the SW segment is gaining traction among consumers who are still opting for compact models. 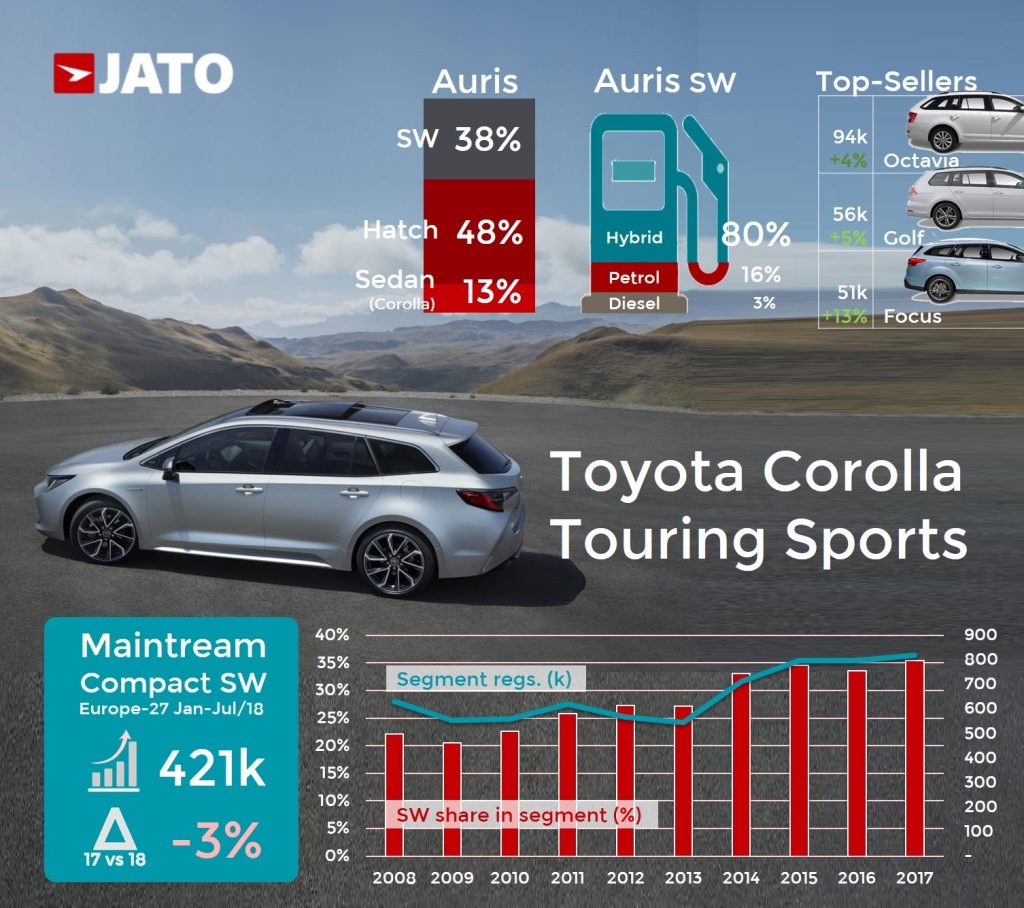 Another new compact to be presented is the Mercedes A-Class Sedan, the replacement of the CLA Sedan. Despite the limited popularity of compact sedans across Europe, this new arrival aims to grab a share of the segment and act as a rival to the Audi A3 sedan. However, the main market for the new A-Class will be China. Since its introduction in 2013, Mercedes has sold more than 455,000 units of the CLA. 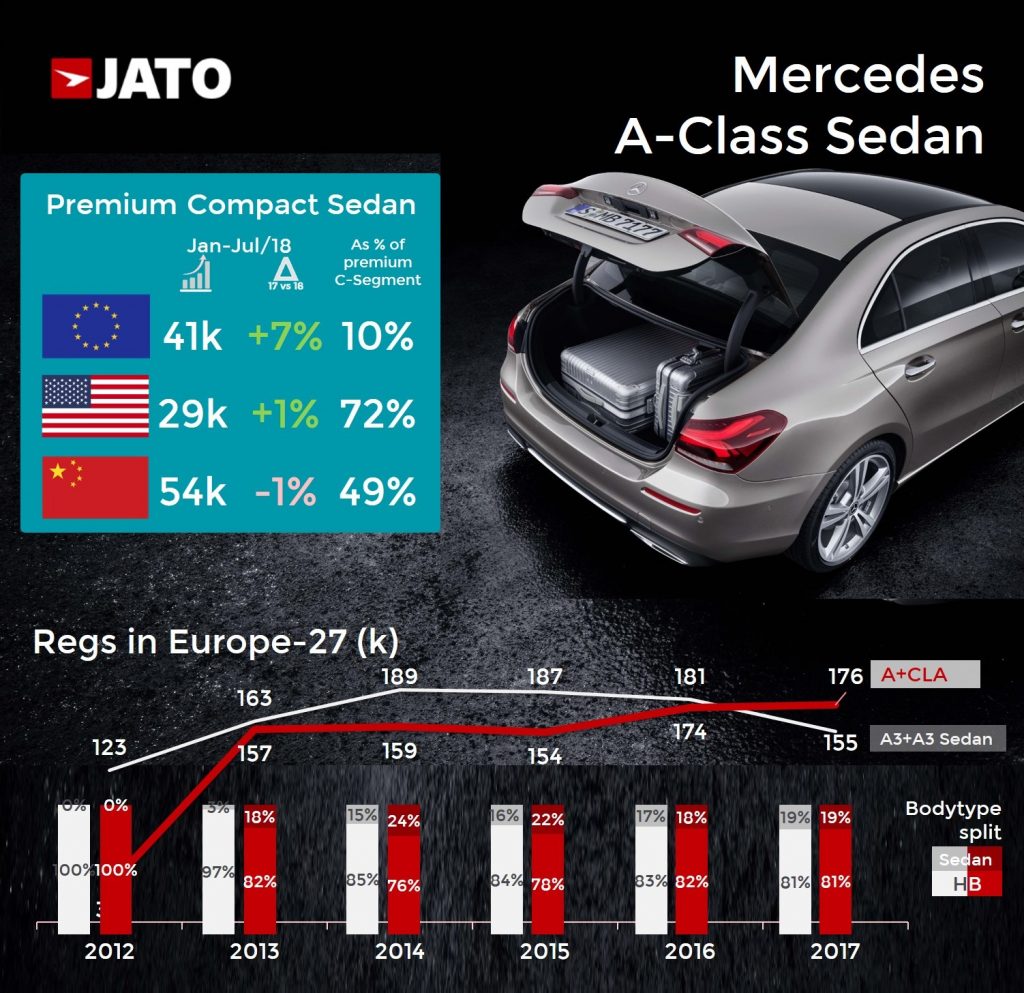 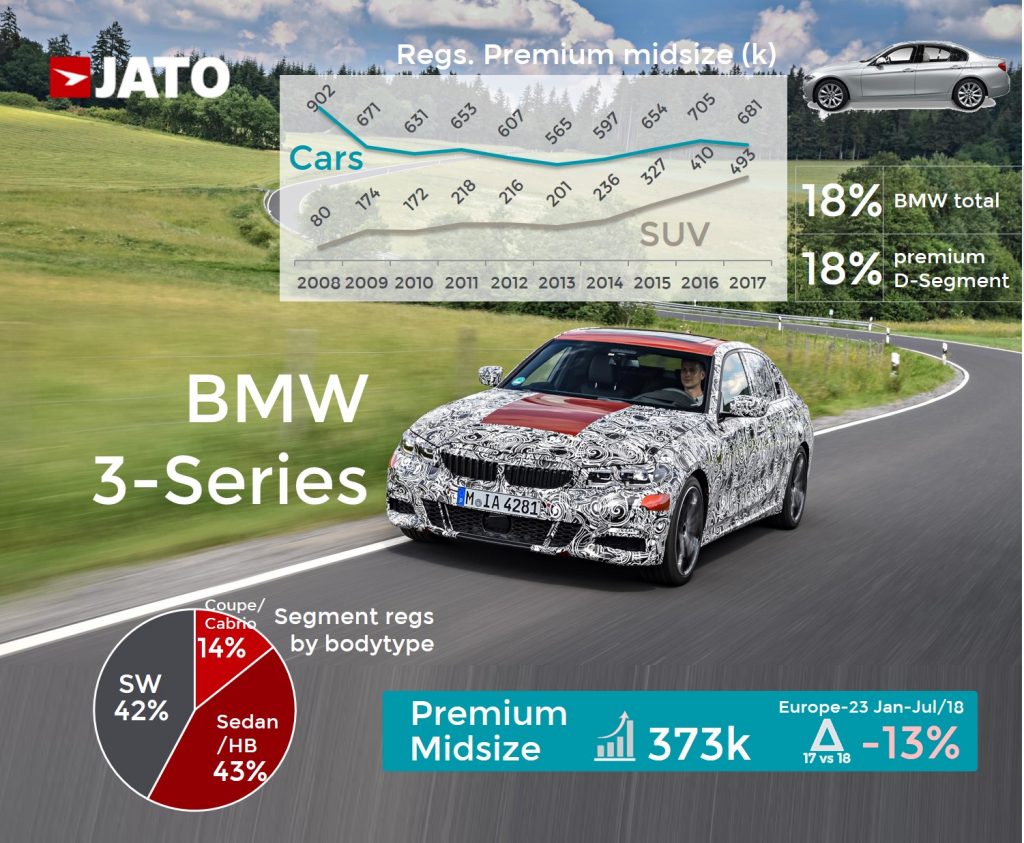 Finally, BMW will launch the revived Z4 with a striking new look, designed to halt the decline in the premium midsize sports car market, which continues to be dominated by the Germans. Thinking about more than just volume, the new Z4 will help BMW to strengthen its sportscar image, which has been threatened by Mercedes. Sports cars are slowly disappearing from the roads, as they are being challenged by supercars on one side, and with coupe SUVs on the other. 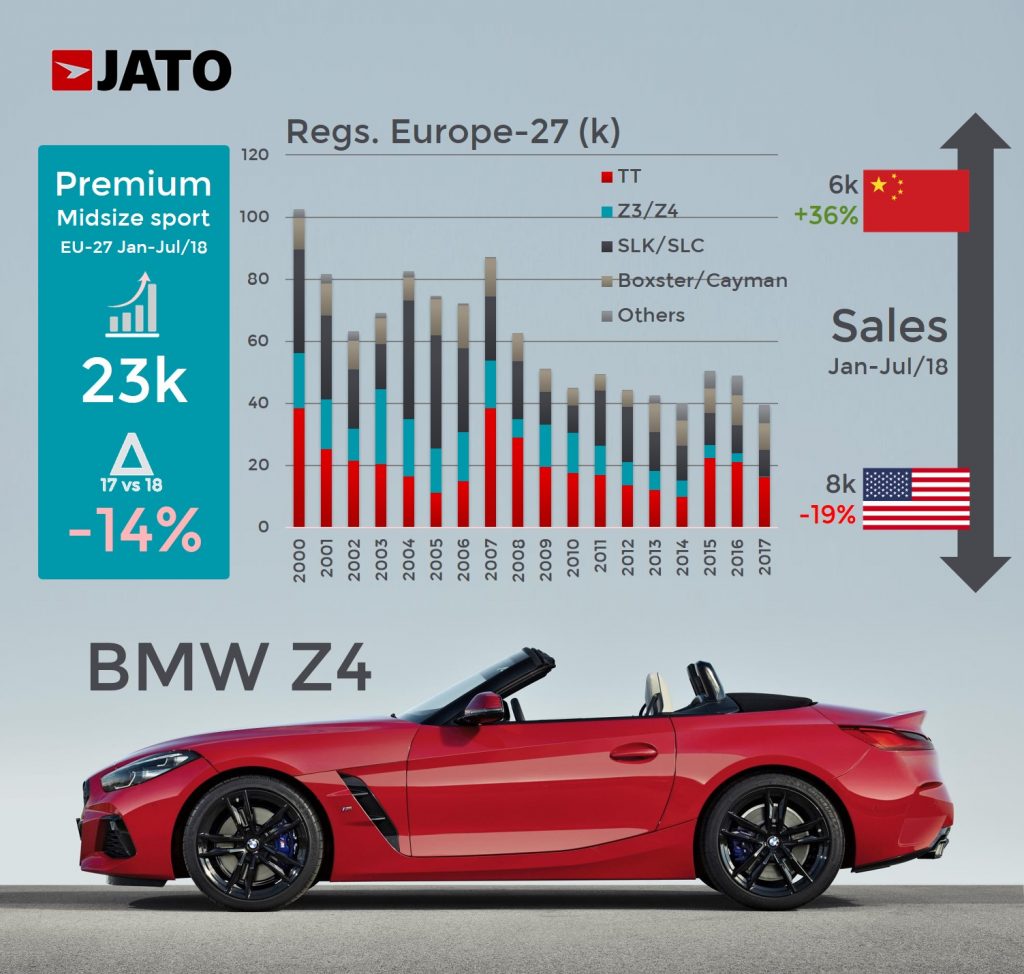 Diesel presents another big challenge for the European carmakers. After the continuous and unclear messages from several governments producing moments of panic among consumers, the demand for diesel has not stopped losing ground. This year in March, the diesel market share recorded the lowest value of the last two years. However, our data shows that the fall has stabilized since then, primarily because this fuel type is still a valid option among many consumers. If the demand for diesel continues to fall without a sharp increase in demand for alternative-fuelled-vehicles then we will see a bigger negative effect on Europe’s carbon footprint. 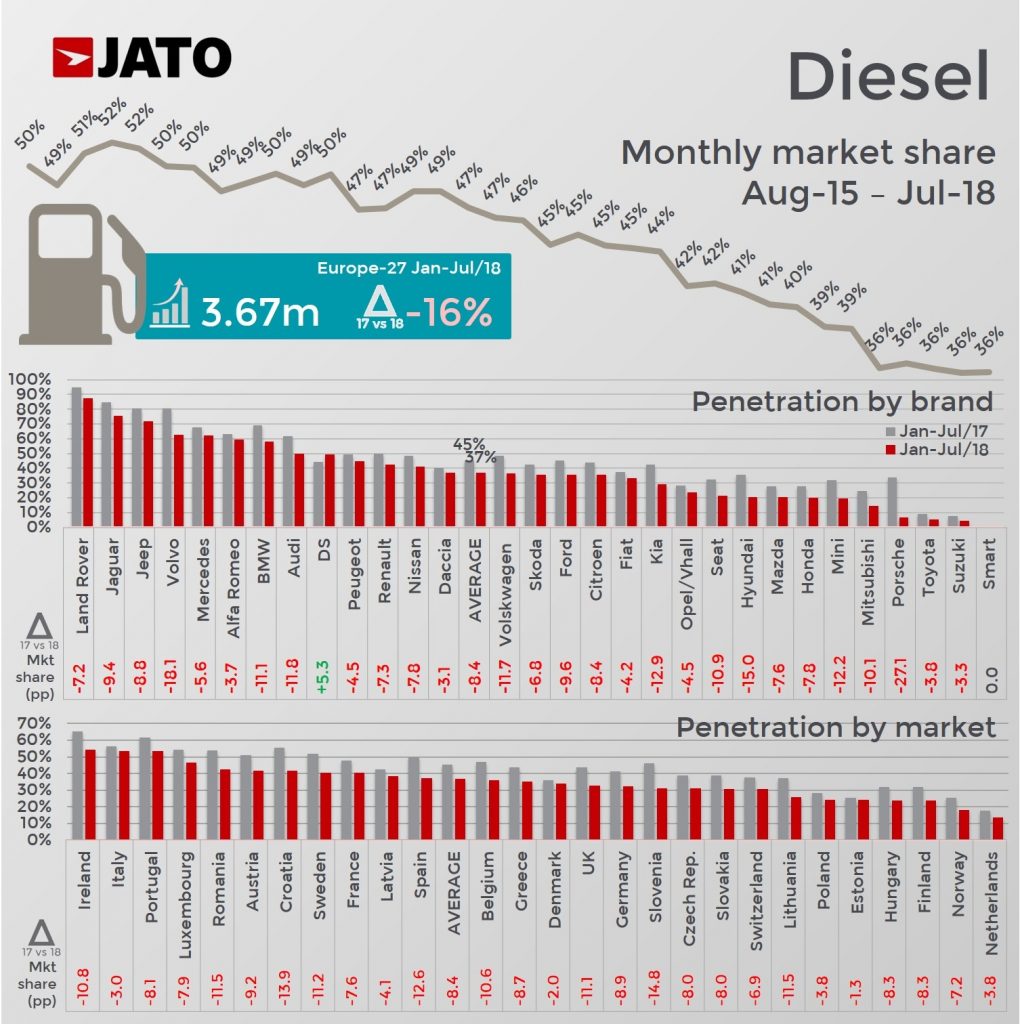