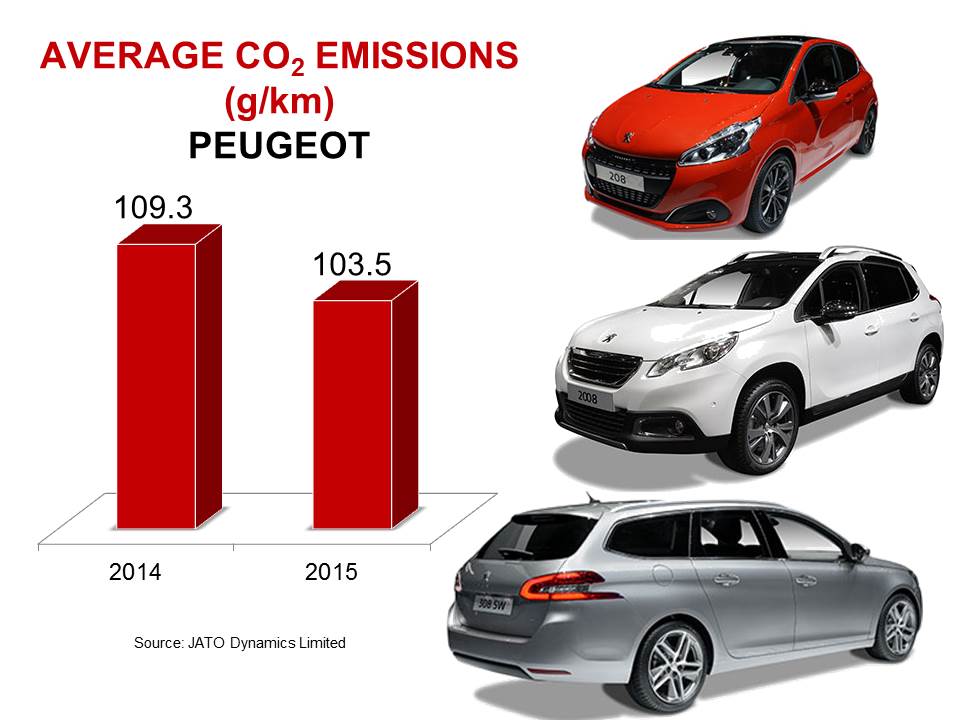 Last year the average CO2 emissions fell by 3.2% across 2015 to finish at 119.3g/km in the 23 European markets analysed by JATO Dynamics. The result was 4g/km lower than the total seen in 2014 and 7.5g/km lower than the figure registered in 2013 and placed Peugeot and Norway as the volume brand and market with the lowest average CO2 emissions for the year. The French car maker climbed one place outperforming the 2014’s leader – Renault – thanks to reductions posted by its three best-selling models. Peugeot posted the second best improvement (-5.8g/km) in the top 20, and it was followed by Citroen that gained one place. These two brands outpaced Renault mostly because their ranges were not negatively affected by new SUV right as it happened to Renault with its new Kadjar.

In 2015 Peugeot not only recorded registrations growth for its most popular models but it also recorded average CO2 emissions decreases for all of them. The Peugeot 308 posted the highest sales rise and emissions reduction, jumping from 161,700 units with an average of 102.3g/km in 2014 to 213,800 units and 97.8g/km in 2015. This means a 32% increase in registrations and a reduction of 4.5g/km in average emissions. The 308 was the second best-selling model behind the 208 subcompact. The average emissions for the 208 decreased from 101.6g/km in 2014 to 99.3g/km last year whereas its registrations grew by 7%, counting for 27% of the brand sales. Peugeot 2008 registrations posted a positive growth of 14% with an average CO2 emissions falling from 109.1g/km in 2014 to 104.8g/km. The 108 was the fourth best-selling Peugeot and the model with the lowest average at only 94.6g/km. However, even if its registrations more than doubled (+120%), its average increased by 0.6g/km compared to 2014 results.