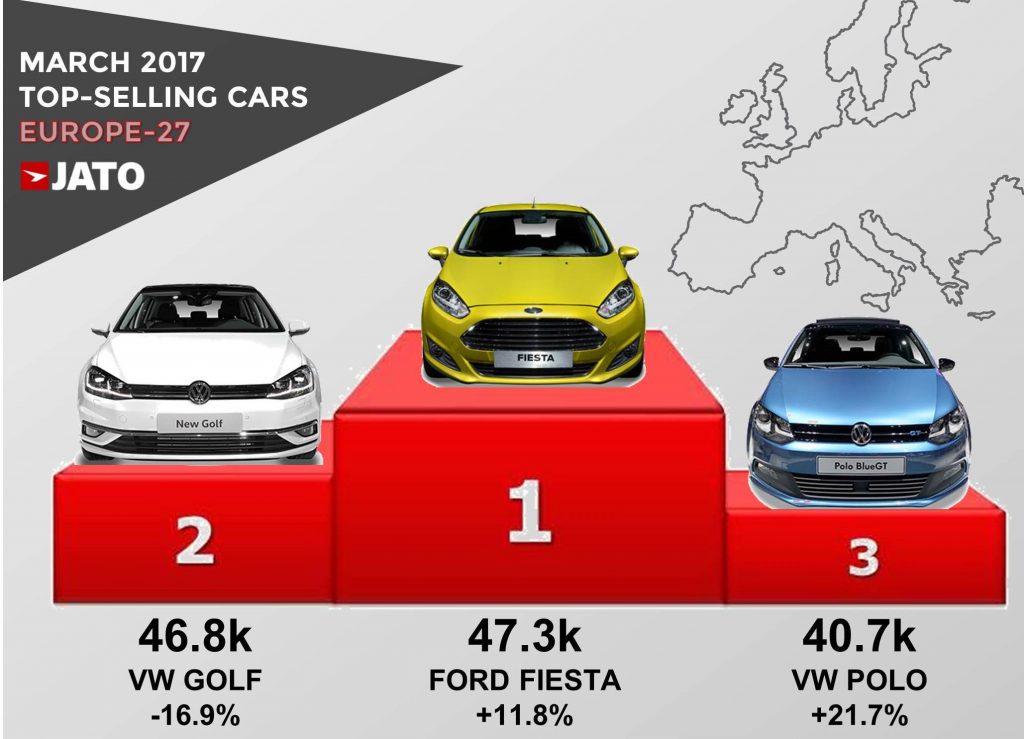 It is historical. The Volkswagen Golf was not Europe’s best-selling car in Europe in March. For the first time in seven years, the popular compact from Volkswagen lost its first position after it was outsold by the Ford Fiesta, exactly as it happened in March 2010. The Golf registrations posted a 16.9% decline during the third month compared to the 11.8% increase recorded by the Fiesta, in a market that grew by a solid 10.8%. What’s behind this result? 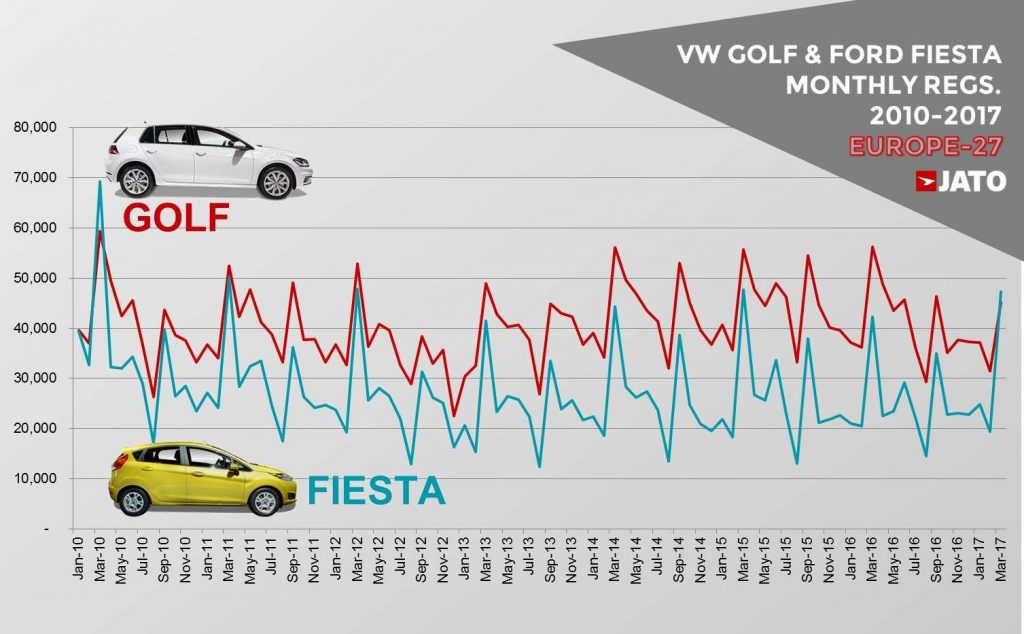 1. First of all there is the usual drop when a refresh takes place. The current Golf was launched in 2012 and has just got its first facelift since then. The company has run down the old pre-facelift range and not yet got much stock of the facelift range so we are in the natural lull between the two. It is a common trend when an important update is introduced. It is not the case of the Fiesta, which is already completing its last months of its commercial life after its launch in 2008. Ford gets ready the all-new generation, with the consequences in price to the previous one. 2. Another reason for the Golf’s second position is related to the diesel situation in Europe. During the last 18 months we’ve haven’t only seen the effects of the dieselgate, but also the increasing bad reputation issue around this fuel-type. Governments through bans are severely attacking the diesels and of course this is having an impact on the demand. 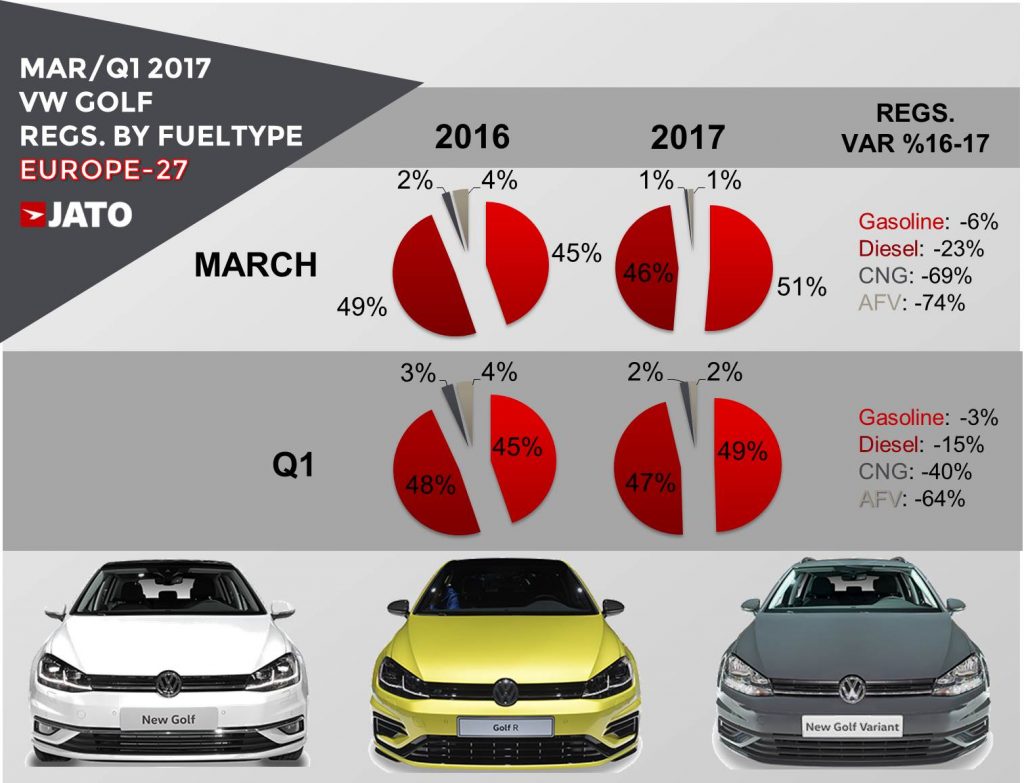 The Q1 results for Europe show that diesel registrations fell by 0.3% losing market share from almost 50% in Q1-16 to 45.7% a year later. Most of the diesel cars sold in Europe are SUVs (37%) and Compact cars (20%), just where the Golf sits. Registrations for compact diesels fell by 5.3% through March, with the Golf ranking first in terms of volume, but posting a 15.1% decline. The diesel versions of the popular Volkswagen counted for almost 47% of its volume in Europe. 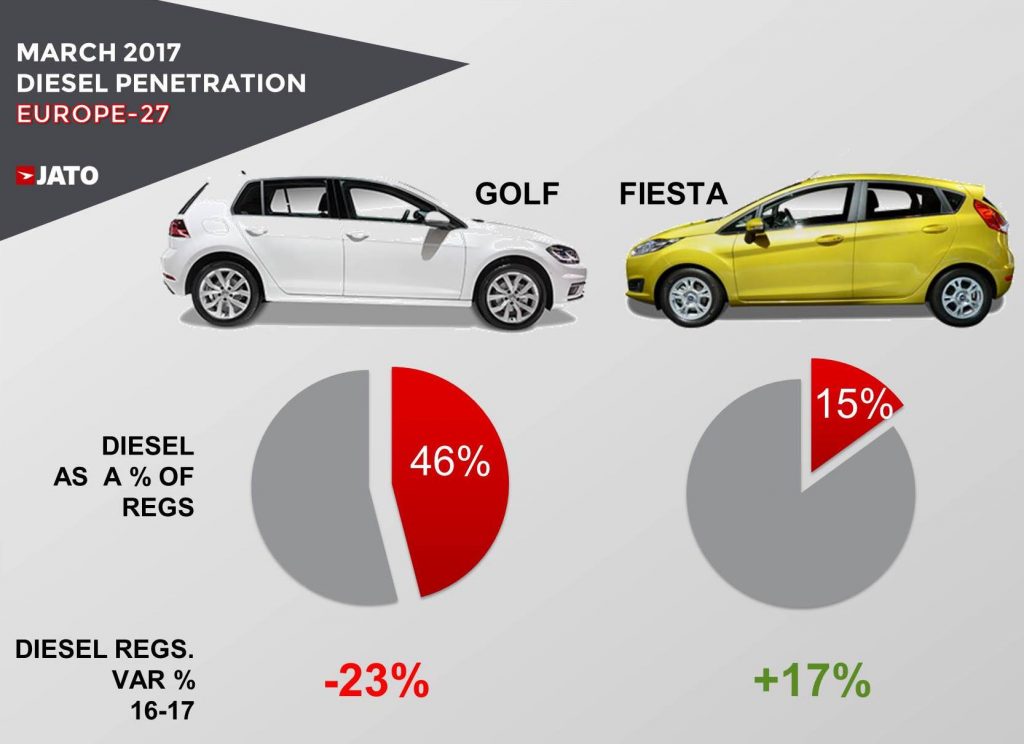 In contrast, the Fiesta sits in the B-Segment, where the diesel is not really an important fuel-type to be considered by customers. In fact, only 20% of the subcompact registrations during the Q1 featured a diesel engine. The Fiesta diesel counted for only 17% of its registrations in Europe, with its volume up by a healthy 15% during the quarter.

3. Last but not least, the incentives. JATO’s incentives data base indicates that in general terms, the Fiesta had better deals in March. The research shows that the average incentive (that includes all kinds) for the Ford posted a better changes in four of the five markets analyzed, when compared to February rebates. In other words, the discount grew more for the Fiesta than for the Golf in Italy, Spain and Germany, while it posted a smaller drop in the UK. In France, there wasn’t the 0% Finance offer for the Golf in March, and instead of this there was a classic 3.9% finance over 48 months or 4.5% over 60 months (no deposit, which was definitely not attractive.

What’s next? It is likely to see the Golf back in the top position again in April and in the coming months. The updated version has everything to ensure the domination of this model in Europe. Meanwhile Ford prepares the new generation of its Fiesta with the usual negative impact on sales. This is how it should be, unless the diesel downturn gets more serious.