Diesel in Europe in 2017: annus horribilis

The diesel crisis is evident in last year’s registration data. Figures from 2017 demonstrate that the fuel type that was once Europe’s favorite is slowly disappearing from the roads of some key markets. What started as a scandal involving one manufacturer soon became an institutional issue that involved both local authorities and governments. The data collected by JATO in 2017 shows a dark reality for diesel engines in Europe. 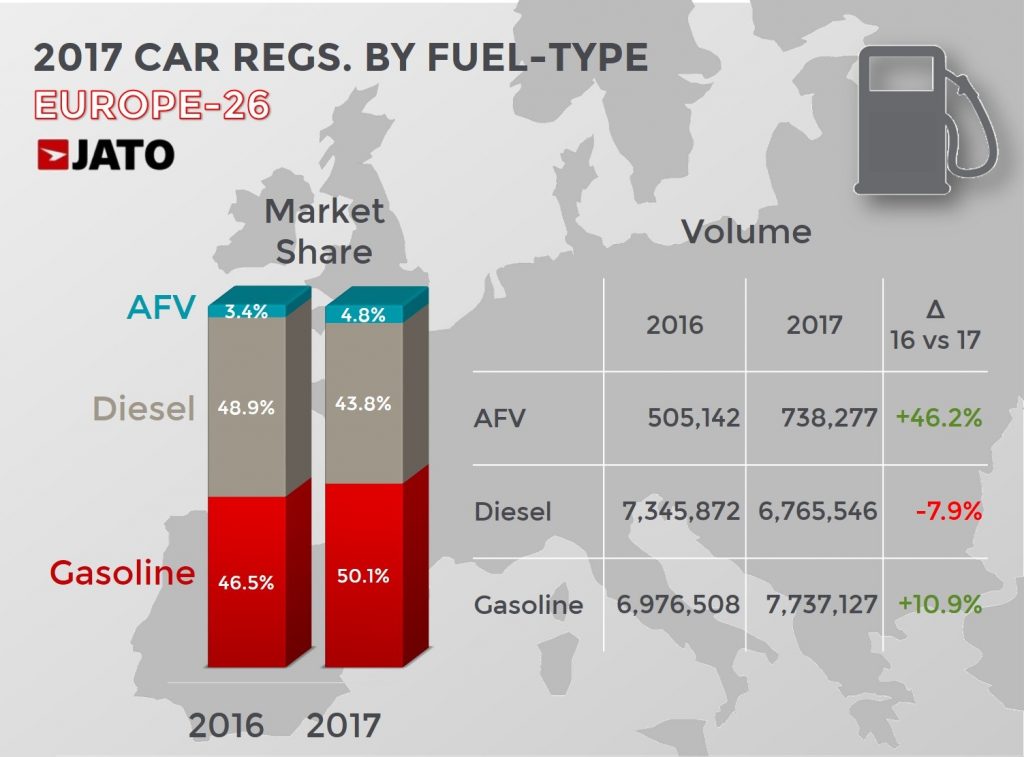 Last year the European passenger car market posted a 3.1% increase, growing to 15.6 million units. Though this was half the growth rate seen in 2016, the results can be considered healthy for the car industry. Most of Europe is enjoying social and economic stability and this means improved consumer confidence, which is at the same time one of the main purchase enhancers. 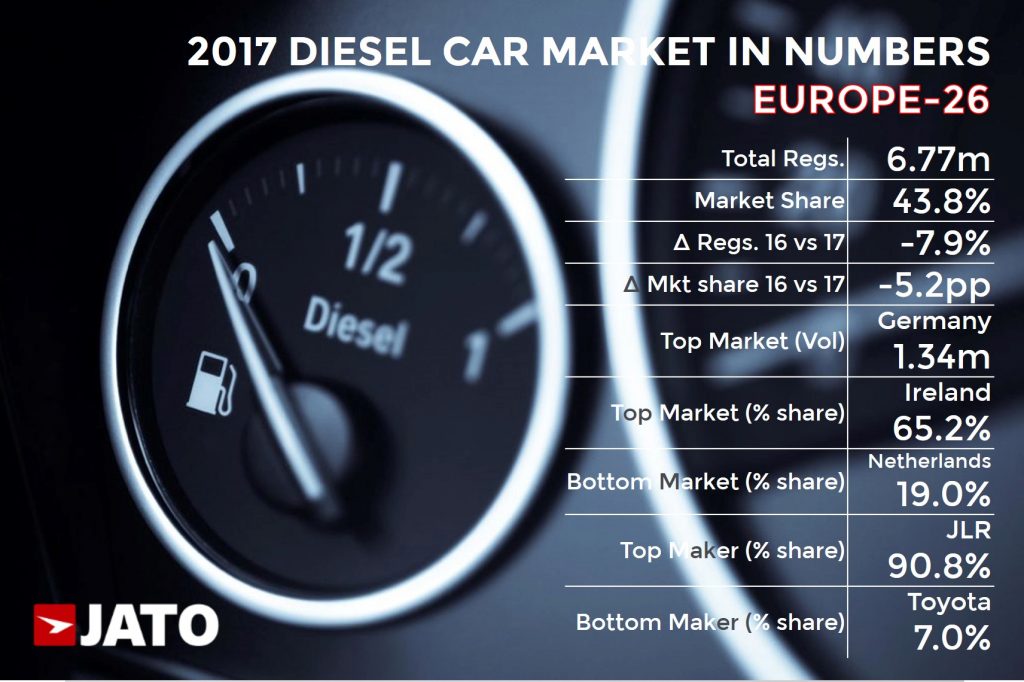 But growth didn’t happen everywhere in the industry. Car registrations faced two big threats in 2017, which are expected to become a problem in 2018. Brexit and the diesel crisis could hit the European markets more deeply this year and growth could be impacted. The common theme of both issues is uncertainty as both of generate more questions than answers, while governments are not helping to clarify their positions. 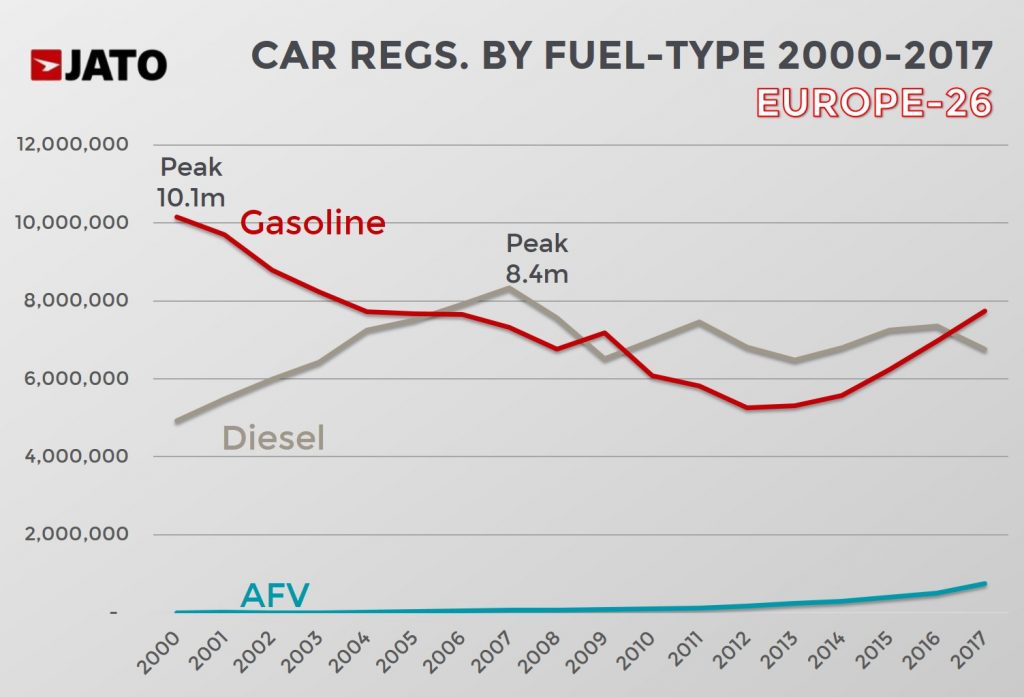 In the case of diesel vehicles, the figures are clear. Diesel car registrations totalled 6.77 million units in 2017, which is 7.9% less than the total recorded in 2016, when 7.35 million cars were registered. That was the lowest volume since 2013 when the European economy was facing the worst of the tough recession years. However, the results are more dramatic if we look at the market share trend. 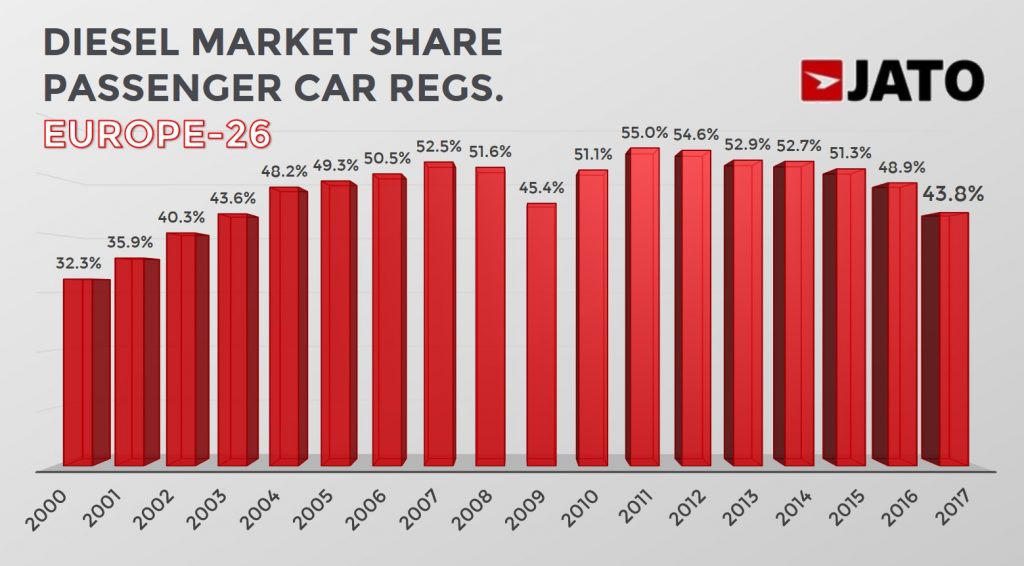 Diesel cars accounted for 43.8% of total registrations in 2017. That was the lowest market share since 2003 when they accounted for 43.4%, and when this fuel type was taking off as an attractive alternative to gasoline. Last year’s share was 11.1 percentage points lower than the peak reached in 2011. However, it is not a new trend, as the diesel market share has been falling since 2015 when the dieselgate scandal came into light. 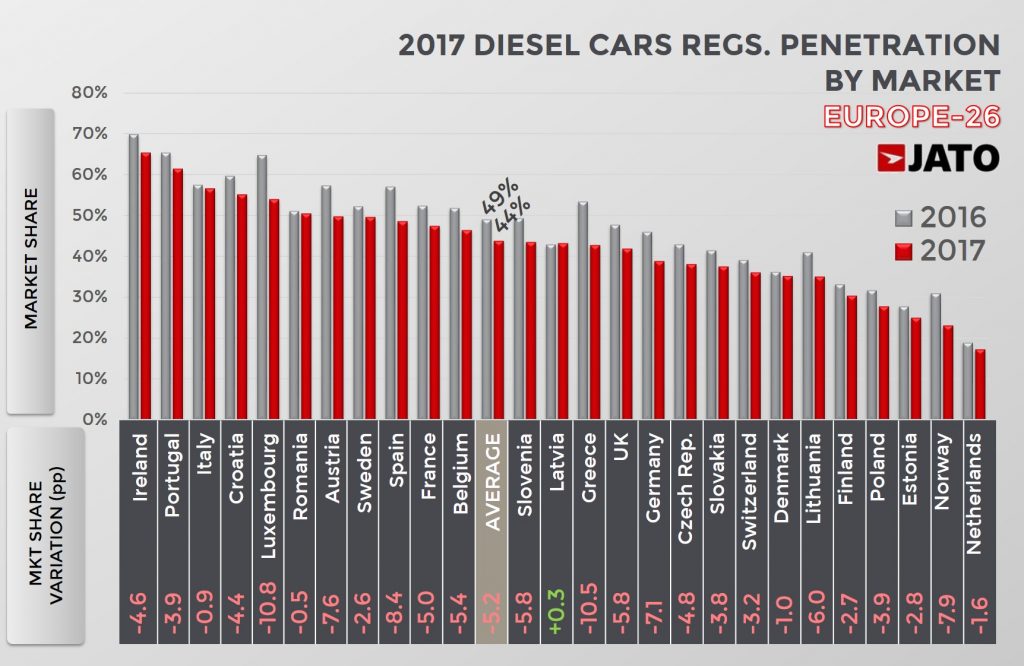 The outlook in the country data shows that, despite the differences, market share decline is a common trend. There were market share declines in 25 of the 26 markets in scope, with Latvia seeing the only increase, from 42.9% in 2016 to 43.2% one year later. Even countries like Portugal, Ireland or Italy, where the diesel has been traditionally a key player, the results showed decreases between 2016 and 2017. Not to mention the dramatic fall registered in Luxembourg, Greece or Spain.

The situation is quite dramatic when analysing the last 7 years. We have detected 9 markets where diesel vehicles used to have a dominant position back in 2011 and now face very tough times. Norway is the most shocking case, as diesels accounted for 3 in 4 of the cars registered in 2011, but the Government’s commitment to alternative fuel vehicles, plus the reputational issues of diesel resulted in its market share shrinking to 23% in 2017. That’s a decline of 52 points in only 6 years. 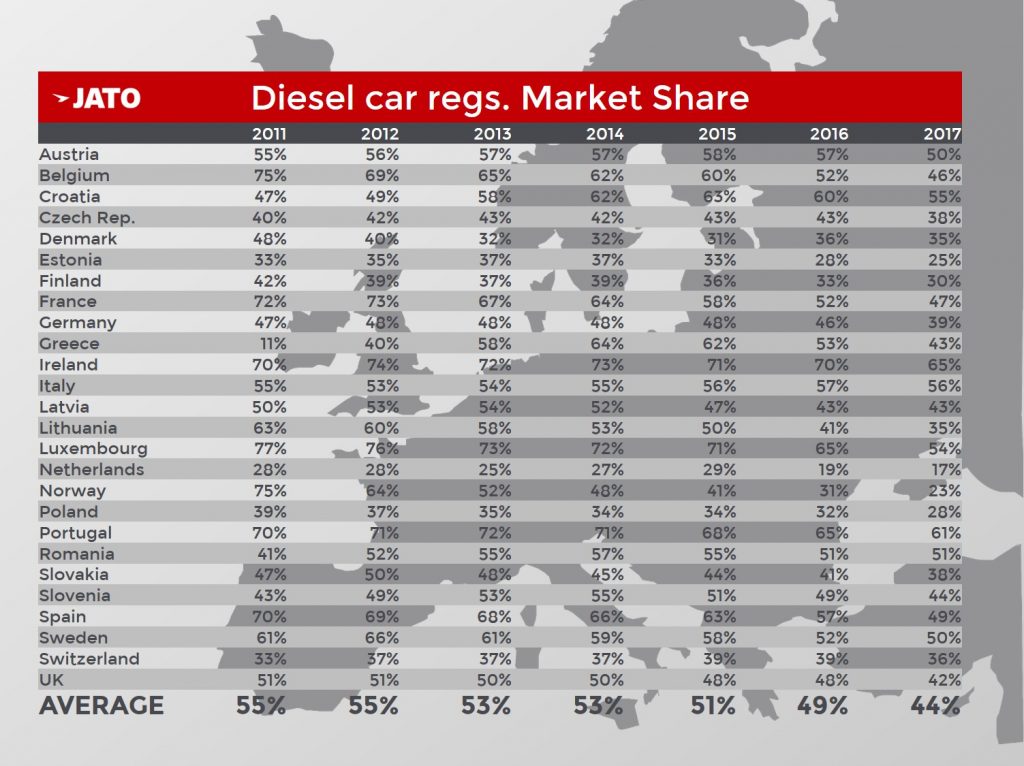 Other markets where the diesel used to have more than 60% market share in 2011 include Belgium, Lithuania, France, Luxembourg, Spain and Sweden. They have also seen big decreases (between 11 and 29 percentage points). In the case of Portugal and Ireland, the importance of diesel cars continues, despite the market share losses of 8.4 and 4.8 percentage points respectively.

Italy is perhaps the only bright spot of this story. The diesel is still the main fuel-type with 56.5% market share in 2017. That was 0.9 points below the results in 2016, but only 1.1 points below the market share seen in 2011 (55.4%). In other words, diesel is holding on to one significant market in Europe and the main reason is the importance of the diesel among Italian drivers. 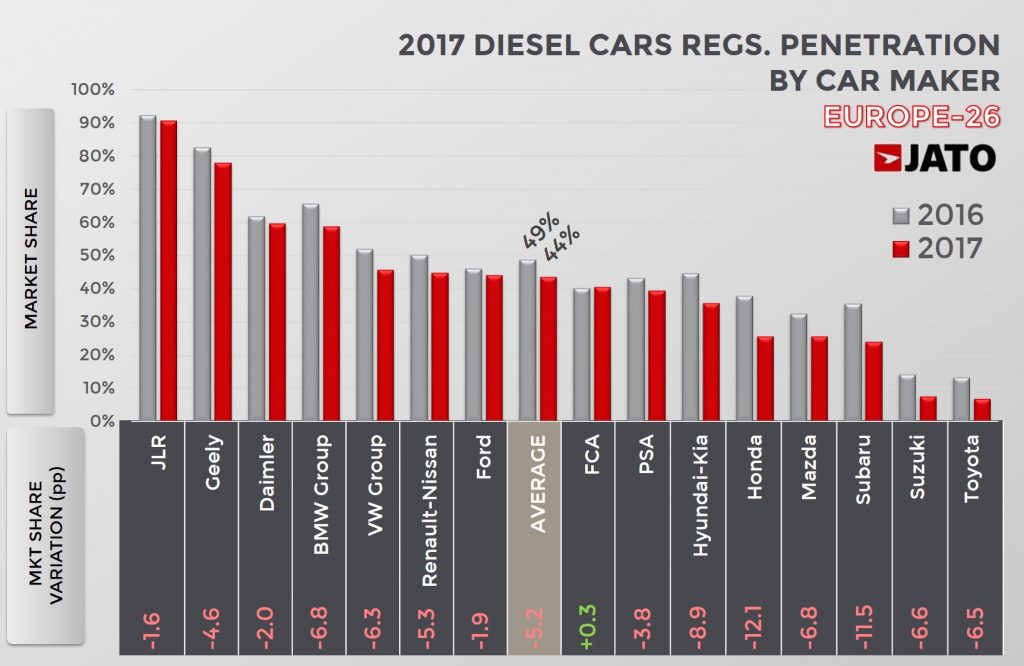 There are two main reasons for diesel’s popularity amongst Italian drivers. The first is that the Italian Government has not taken an anti-diesel position, as we have seen in other nations where the message has confused drivers. Though it is true that the Italian government is considering whether forbidding combustion engines from 2040 would be a positive step. But for now, in Italy all the official statements refer to the “combustion engine” and it is rare for the Government to refer to “diesel” only. That’s perhaps the main difference between Italy and France or the UK, where the diesel fuel type has fallen rapidly out of favour amidst concerns over emissions.

A second reason for the relatively strong position of diesel in Italy, in contrast to the rest of the continent, is related to gasoline prices. According to Statista, Italy has the third most expensive gasoline in Europe, only behind Norway and Netherlands, where the consumer preference shifts to AFV. In other words, the diesel hasn’t been demonized, and gasoline or AFVs are not as attractive as in the rest of Europe.

The first effect of this crisis is quite evident. There were more gasoline cars, with volume up by 10.9%, which is in line with the growth rates seen in 2016 and 2015, and confirms the shift from diesel to gasoline that started in 2015. The difference last year is that the growth of gasoline registrations accelerated or outperformed the total market’s average. Their market share soared by 3.6 points, or the second highest change so far this century.

This is resulting in bitter-sweet feelings for Alternative-Fueled-Vehicles. Growth accelerated from +25.4% in 2016 to +46.2% last year, as volume jumped from 505,100 to 738,300 units. That’s the highest volume in Europe. It was also a record year in terms of market share, which increased from 3.4% in 2016 to 4.8% last year. This is good news for AFVs, but considering the context of the diesel crisis and the strong economic conditions in Europe, one would expect stronger growth in 2017.

Better technology (increased range and better batteries) and lower prices have attracted more customers. But the remaining problem with AFVs continues to be the infrastructure and the limited choices in the market. Electric cars especially suffer due to this – the market share of EVs remained marginal at 0.9%, or 0.3 points higher than 2016. The current AFV offering includes around 70 different models of all kind of segments, compared to more than 350 available in the European market.