New car registrations in Q1 2019 show that confidence among consumers is falling due to uncertainty about Brexit, diesel bans and economic downturn in many markets in Europe – falling by 3.2% to 4.13 million units. However, the quantity of registrations still remains high, with Q1-19 posting the third highest volume of the last 10 years. 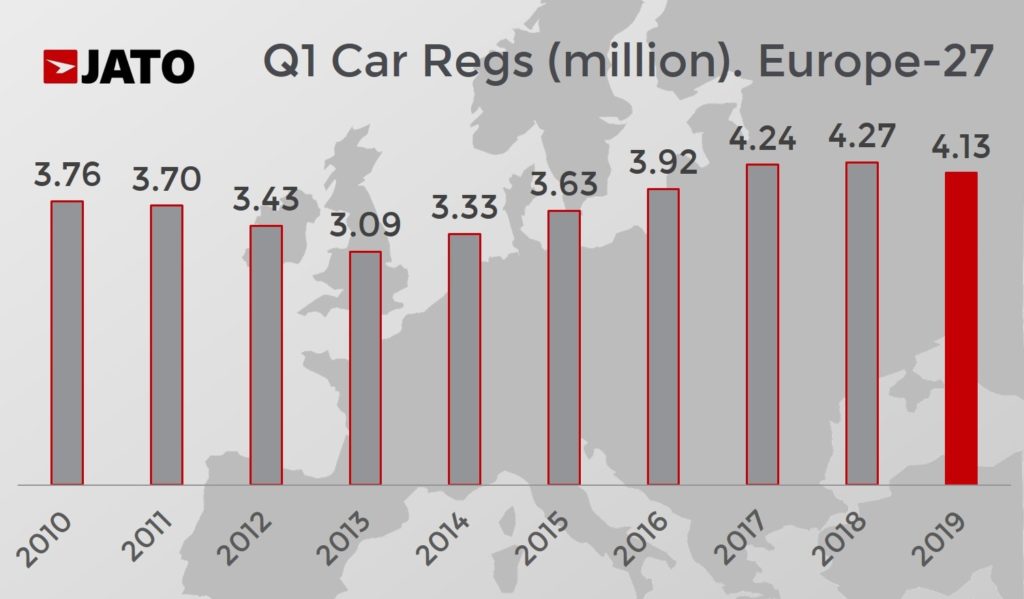 Overall registrations would have posted a bigger drop without an increase in demand for SUVs. During the first quarter, the segment increased its market share to a record 37%, up by 3.5 percentage points compared to Q1-18. This was due to more interest from consumers responding to a wider range of products on offer on the market. 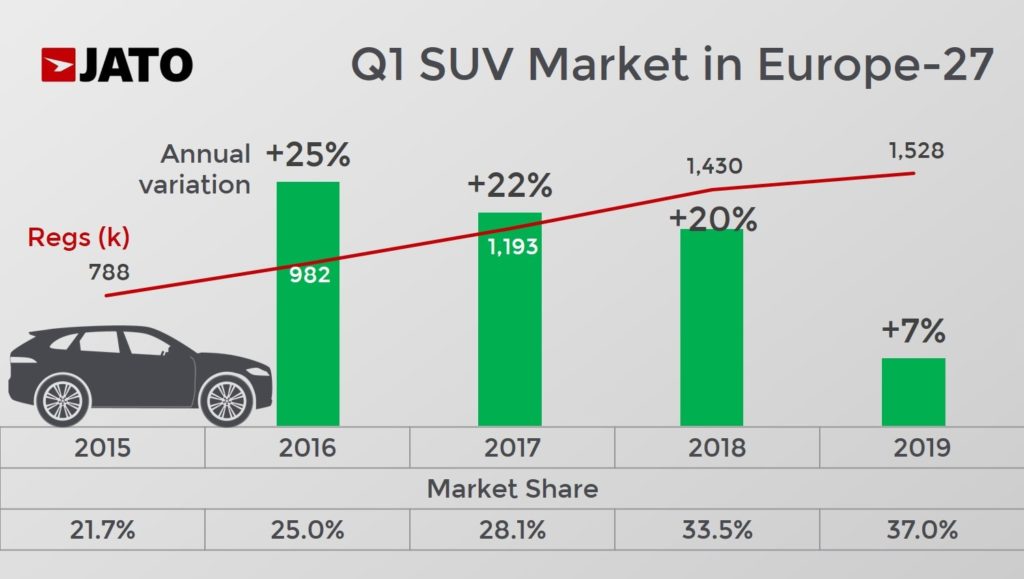 A total of 1.53 million SUVs were registered in Europe during the first quarter, a volume increased of 6.8% – making them one of the only two segments to post a volume increase. Despite the good results, the growth in the segment was lower than what we’ve seen over the last few years. The rate fell from 25%, 22% and 20% in Q1-2016, Q1-2017 and Q1-2018, respectively. Interestingly, the slowdown has taken place at the same time as makers have introduced more models to market. The offer jumped from 75 different models in Q1-16 to 115 in Q1-19.

Small SUVs drove most of the growth during the quarter. They were the segment with the highest market share gain thanks to the outstanding results of the Volkswagen T-Roc, which became Europe’s top-selling small SUV. With this model, the German automaker proves that it can still succeed even if it arrives late to the trend. In fact, VW Group was the top market share winner in the segment as it took share away from PSA and FCA. 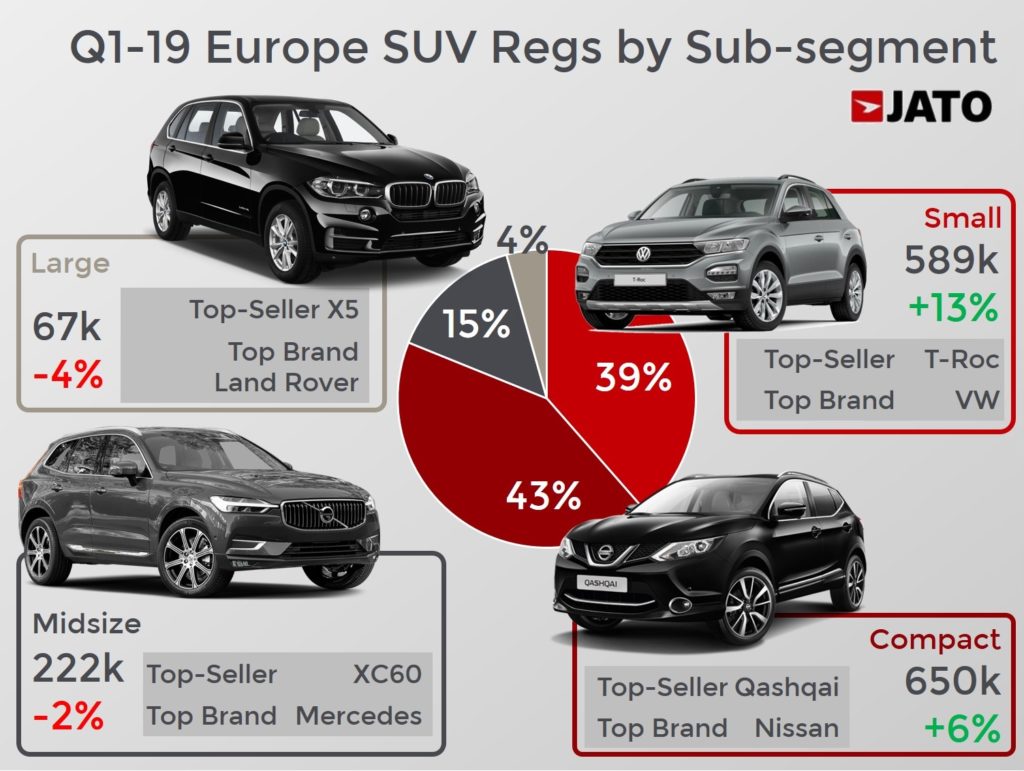 Another winner in Q1-19 was the compact SUV segment, where registrations increased by 6.3% to 650,400 units. Growth was driven by VW Group, PSA and Toyota, while the usual leaders like the Nissan Qashqai, Volkswagen Tiguan and Ford Kuga lost traction. In contrast, the traditional compact cars found fewer consumers in Europe. Demand for mainstream and premium compact cars fell by 11% and 5%, respectively, while MPVs’ total fell by 27% to only 193,300 units – the lowest level for Q1 during the last 20 years.

Dacia and Tesla buck the trend

It started as a minor sub-brand of Renault, which was little known for its cheap cars, but just 14 years later Dacia has become the brand with the best sales performance in Europe. During the first three months of 2019, the Romanian brand posted a record market share of 3.63% – 0.61 more points than in Q1-18 – making it the top market share winner among all brands. Dacia registered 150,000 passenger cars, occupying the 13th position in the ranking by brands, outselling big brands like Nissan, Hyundai and Kia.

Four of the five Dacia models posted positive changes during the quarter. The Sandero once again led the private registrations ranking (which counted for 44% of total registrations in Europe). The second-generation Duster climbed the rankings to become the third best-selling small SUV in Europe, while registrations of the Logan increased by 39% to rank first in the B-Sedan segment. Meanwhile the Dokker continues to be one of the most popular Vans in Europe. 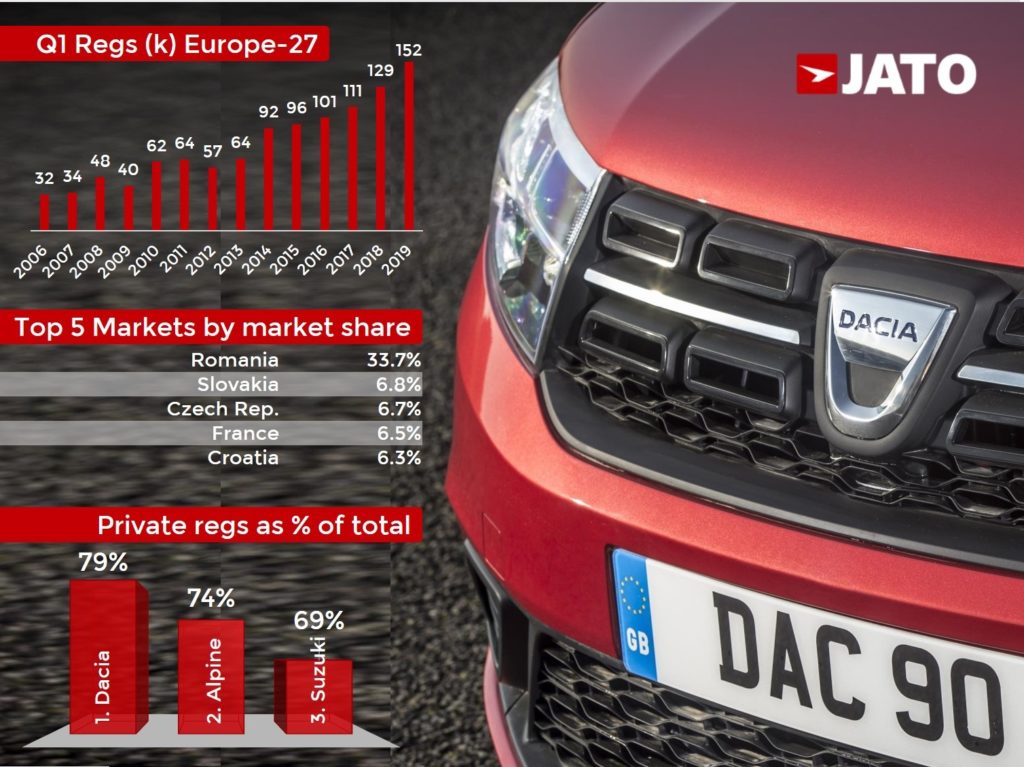 Tesla was the biggest surprise of the quarter. As expected, the Model 3 shook the European market once it started to be delivered. During its first full month on the market, the Tesla Model 3 quickly topped the European EV rankings, outselling other big players like the Nissan Leaf and Renault Zoe. Moreover, the midsize Tesla ranked first in the premium midsize sedan segment in February and led the whole premium midsize segment (including all bodytypes) in March. 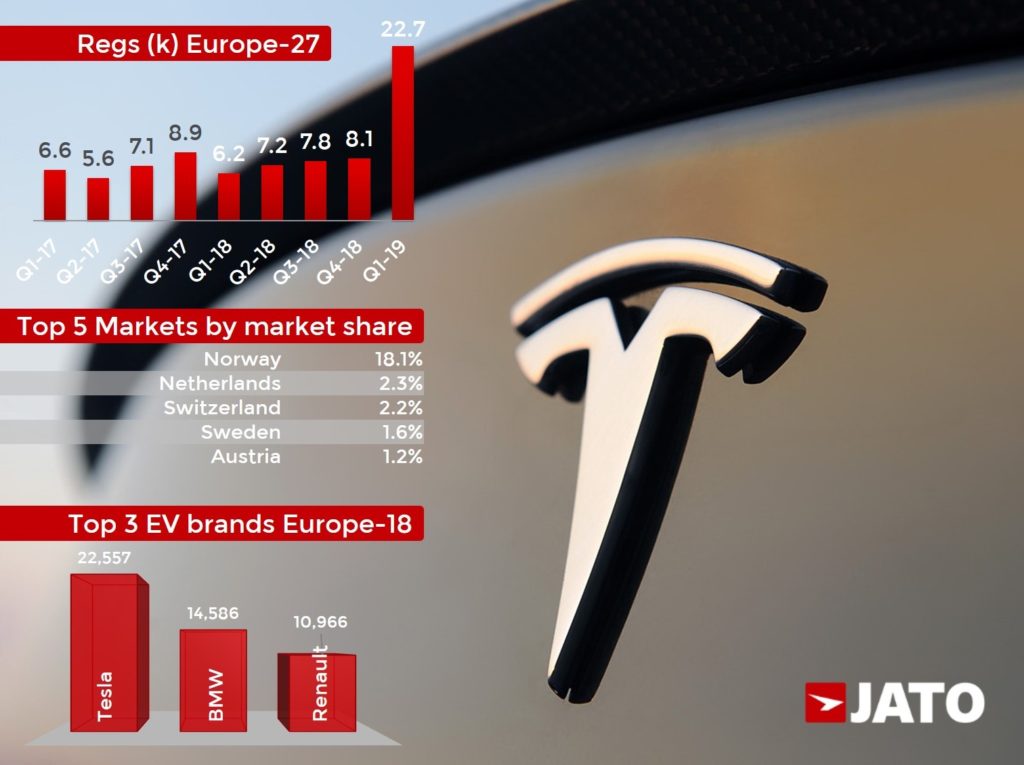 The French brand, Citroen, continues to be boosted by the C3, whose registrations almost equalled those of the Peugeot 208, Ford Fiesta and Opel Corsa. Citroen’s success was also supported by its latest SUV offer, as the C3 Aircross was the second best-selling Citroen model and the fifth best-selling small SUV. The C5 Aircross also occupied the second position in the mainstream compact SUV segment in France during March. 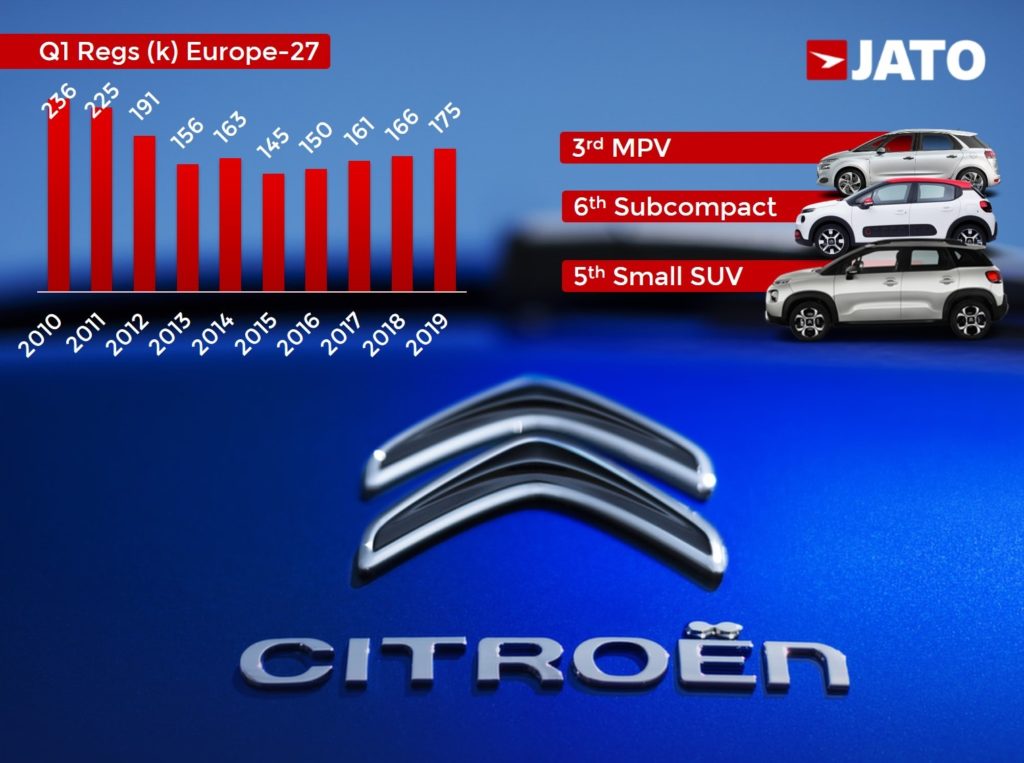 Another winner was Volvo. The big drop posted by the S90/V90 and the aged V40 was offset by the positive results registered by the XC40 and V60 – the two latest launches. The XC40 outsold the Mercedes GLA and Audi Q3, becoming the second best-selling premium compact SUV, only behind the BMW X1. The volume increase posted by Volvo contrasts with the negative results coming from its German rivals.

Volkswagen also had a good quarter. Despite its registrations falling by almost 2% to 455,200 units, its market share increased from 10.8% in Q1-18 to 11.0% in Q1-19. Volkswagen’s drop was lower than Renault’s, Ford’s and Opel/Vauxhall’s. Interestingly, Volkswagen and Seat were the only brands in Q1-19 to increase their diesel registrations and post declines in their gasoline registrations at the same time. This could be linked to the WLTP homologation process, during which many cars could not be sold.

The deteriorating conditions of the European car market were most acutely felt by Nissan, Fiat, Ford, Alfa Romeo and Porsche, which were the brands with the highest market share drops during the quarter. Interestingly, there are different reasons for each.

Nissan is dealing with a complicated situation that includes the uncertainty over Brexit and an aging line-up. While it is taking too long to replace the aged Juke, the Qashqai is feeling the competition from its rivals. At the same time the X-Trail, which led the midsize SUV segment for years, recorded a drop, as the Skoda Kodiaq, Peugeot 5008 and other newcomers gained traction. Instead of introducing the new Juke, the brand decided to invest its resources on the Micra in a segment that doesn’t grow. 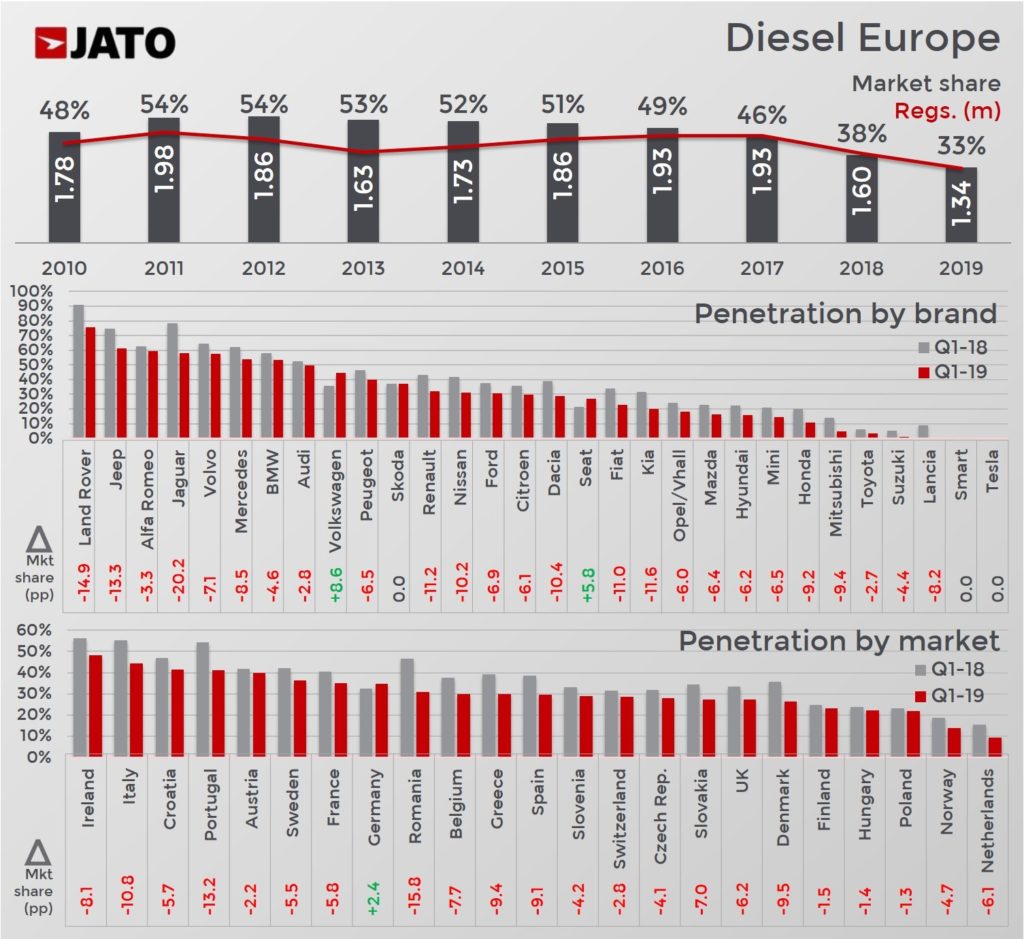 Fiat’s case is quite similar. It has not introduced any new models since the arrival of the Tipo in 2016, although some models have been axed, such as the Punto and Freemont. The company’s strong focus on city-cars and the limited quantity of SUVs in its range (only one) has resulted in the deterioration of its position in Europe. In addition, its top-seller is almost 12 years old and now shows signs of decline.

Ford is in a different situation. It just updated two of its top-sellers – the Focus and Fiesta, but its registrations fell by 10% as the growth posted by the Focus was offset by a big drop from the Fiesta. In fact, the bad results of the Fiesta came only one year after its introduction to the market. Similarly, the Kuga is experiencing a phase of decline, but the Ecosport is doing very well. 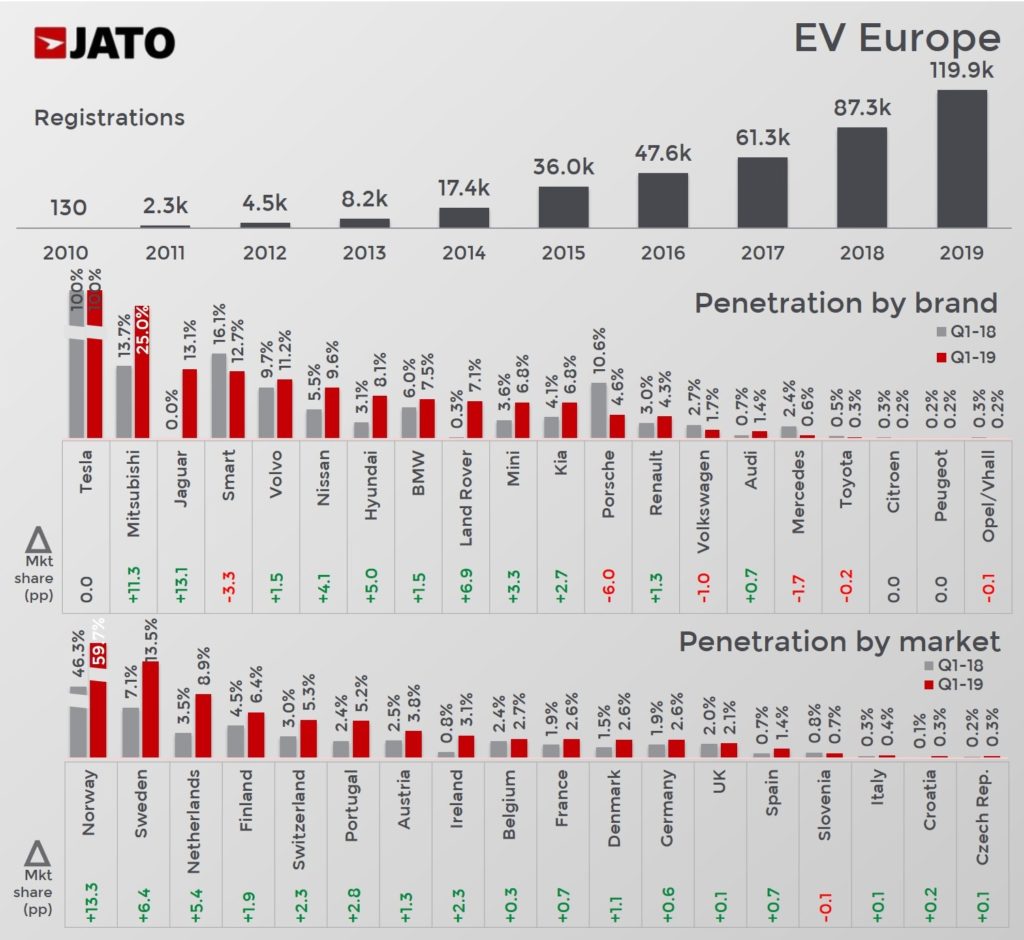 Another relatively new model to post a drop was the Alfa Romeo Stelvio. Its registrations fell by 19% in Q1-19 after two years on the market. However, it was the best performer of the Italian maker’s line-up, as the rest of its products posted bigger drops. The brand needs to introduce more new products to maintain the sales growth registered last year.

Elsewhere, Porsche registered 12,800 vehicles during the first three months, down by 37% on Q1-18. The biggest drops were recorded by the 911 (whose new generation was revealed in Geneva), Cayenne and Panamera. The main reason for the decline is due to the fact that Porsche stopped selling its diesel cars, which counted for 16% of its registrations in Q1-18.