Global demand of sedans and hatchbacks drops in 2019

Last year, consumer preference continued to shift away from traditional sedans and hatchbacks towards SUVs and pickups. Our data from 54 markets across the globe indicated that demand for these ‘traditional’ cars were negatively impacted by the volatile environment, more so than any other body type. This marks a big change for the industry.

China is no longer a safe haven for sedans

In 2019, sedans or saloons were the second most preferred body type among consumers of passenger cars. Their sales totalled 18.85 million units, equating to one in four of the units sold for passenger cars. However, their volume fell by 6.8% and total market posted a 4% decline. 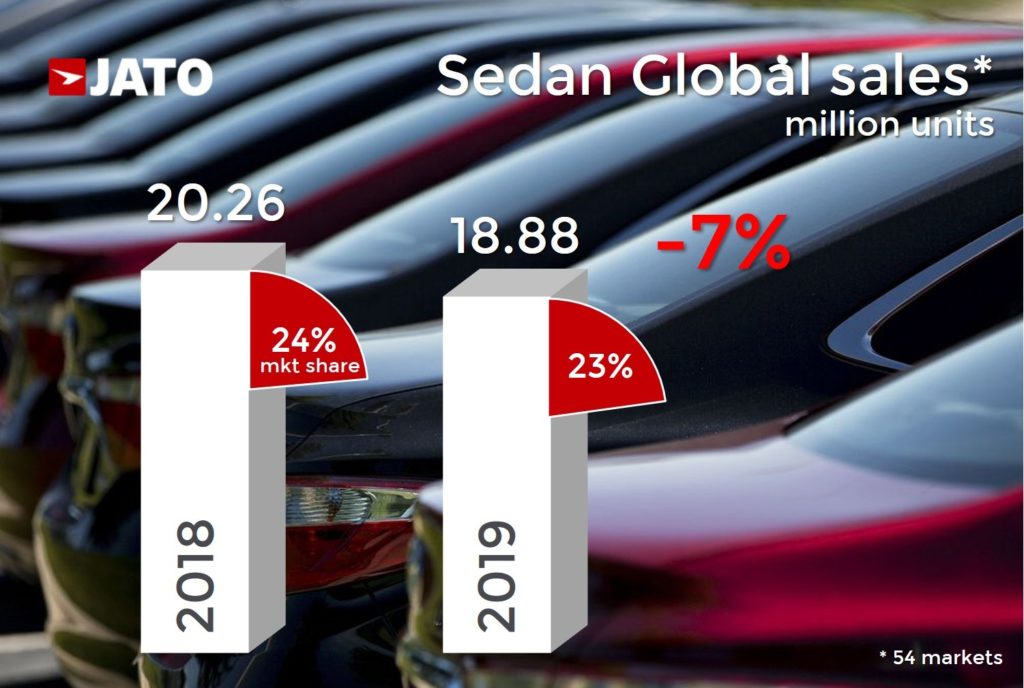 The decline in sales was largely because over half of the vehicles sold globally were in China.  And as Chinese household debt has remained high and consumer confidence has decreased, many consumers in China have delayed making large purchases. Of course all models have suffered a similar fate, but it’s sedans that have borne the brunt of the slowdown. In previous years, Chinese consumers had favoured compact sedans , however the arrival of new and more appealing SUVs combined with the cooling of the economy has dramatically changed outlook for manufacturers.

Last year, we saw a similar shift in the USA – another market which previously experienced large levels of consumer demand for sedans. In 2009 the sales of sedans accounted for 39% of total market. However, in 2019 Asian brands controlled 67% of the sedan segment in the USA, and our data shows that the market share for sedans dropped significantly to just 22%. This has forced many car makers to discontinue historic nameplates such as the Chevrolet Impala, Ford Taurus and Dodge Dart. 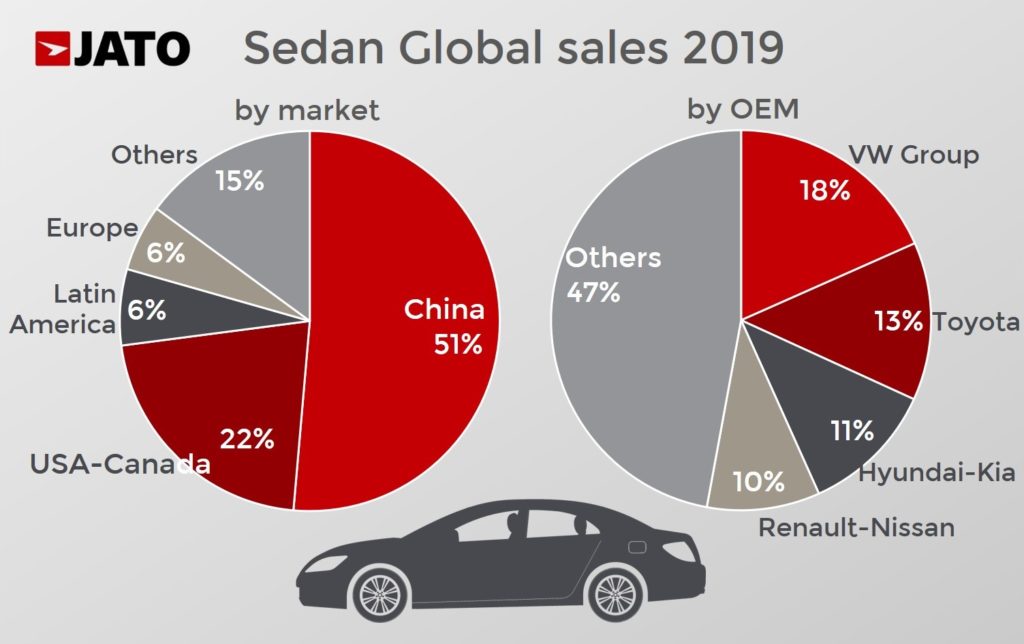 The decline in sales is also, in part, due to their style. They are not as useful as hatchbacks/SW; as spacious as SUVs; nor as comfortable as MPVs; and they are certainly not as glamorous as sport cars. To tackle this, manufacturers have been asking what they can do to regain consumer interest.  Two ideas have emerged, each very different.

The first is electrification. Tesla has shown it can win customers with electrification through its popular Model 3. The second strategy is to make sedans more fashionable and appealing through the so-called ‘coupe-sedan’. Two examples – the Volkswagen Arteon and the Kia Stinger – are sadly struggling to attract the level of interest needed if the segment is to arrest its decline.

Hatchbacks enter the territory of SUVs

The factors driving the decline in hatchbacks sales are more complex. Unlike sedans, hatchbacks lack appeal in the USA and China although they enjoy strong demand across Europe.  This reliance on one core market means their future is more finely balanced and exposed than other segments. 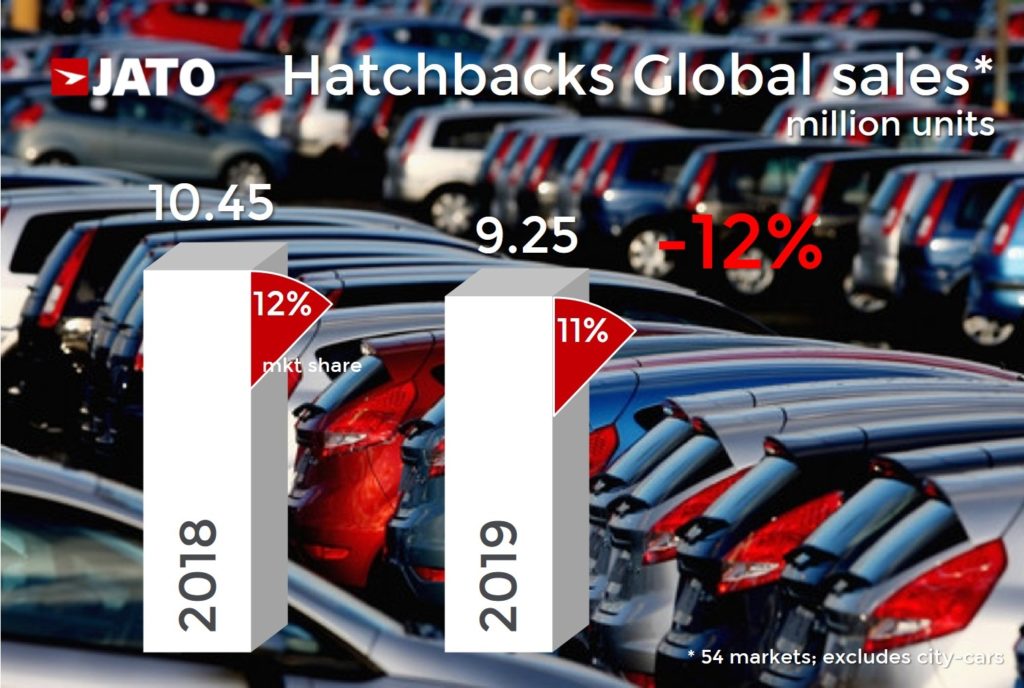 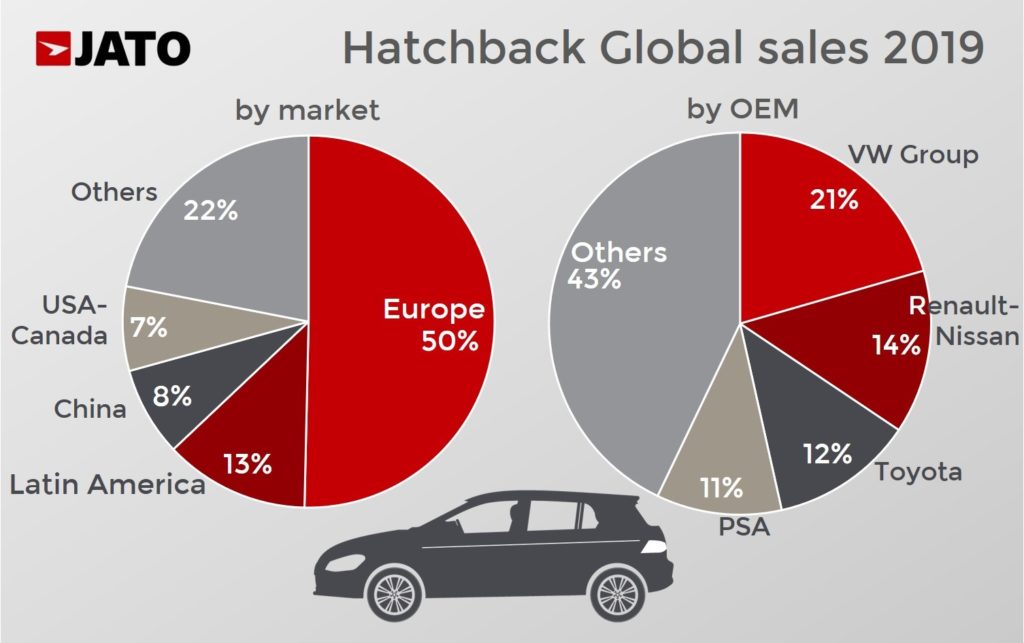 The decrease in popularity across Europe and Latin America arose as hatchbacks increased in size. The larger they became, the less functional and manoeuvrable they became. This increase in size put them in the same playing field as SUVs, which have recently been on a mission to decrease their size. When it comes to choosing between a hatchback or SUV, consumers opt for the most appealing body type: the SUV.

Volatility in the automotive industry has also impacted the position of station wagons. Where wagons used to be seen as the perfect car for families, it is now becoming a less favourable segment for many markets. Wagons have lost their popularity due to their similarities to SUVs, having big and integrated trunks. In a similar vein to hatchbacks, station wagons rely on Europe as their core market for sales. Last year 2.33 million consumers bought a wagon, down by 7%. And as it happens to hatchbacks, the SW rely on one only market, Europe, where 70% of the volume stayed.