For a while, we’ve been talking about upcoming electric vehicle launches and the benefits of owning an EV. Electric cars are the industry’s hot topic at the moment, especially as many automakers have announced ambitious electrification plans for the coming years. But this excitement contrasts with a shocking reality: in H1 2019, internal combustion engines accounted for more than 90% of passenger car global sales.* 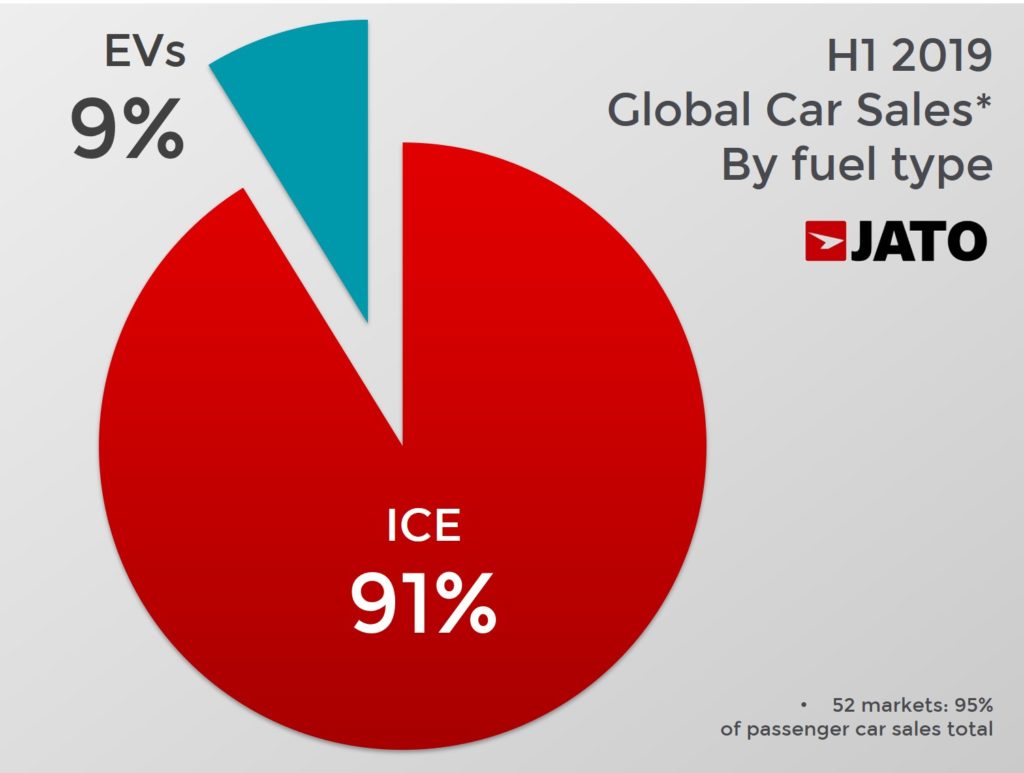 However, this result must be contextualised. Ten years ago, almost every car sold globally was powered by a gasoline or petrol engine. So the electrification movement is still taking place, just as its increasing volumes show. Sales volume of ICE cars in the first half of the year fell by 5%, while electrified cars (BEV, PHEV, HEV, EREV) posted an increase of 36%. The shift is happening, but not at the speed governments and car makers want.

USA and China, addicted to gasoline

Analysis by country and fuel type reveal that gasoline cars dominate the world’s two largest car markets. Even if EVs are now a key part of the Chinese authorities’ economic reboot plan, gasoline is by far the most popular fuel among consumers. In H1 2019, 92% of passenger car sales featured this fossil type – largely due to two main reasons. 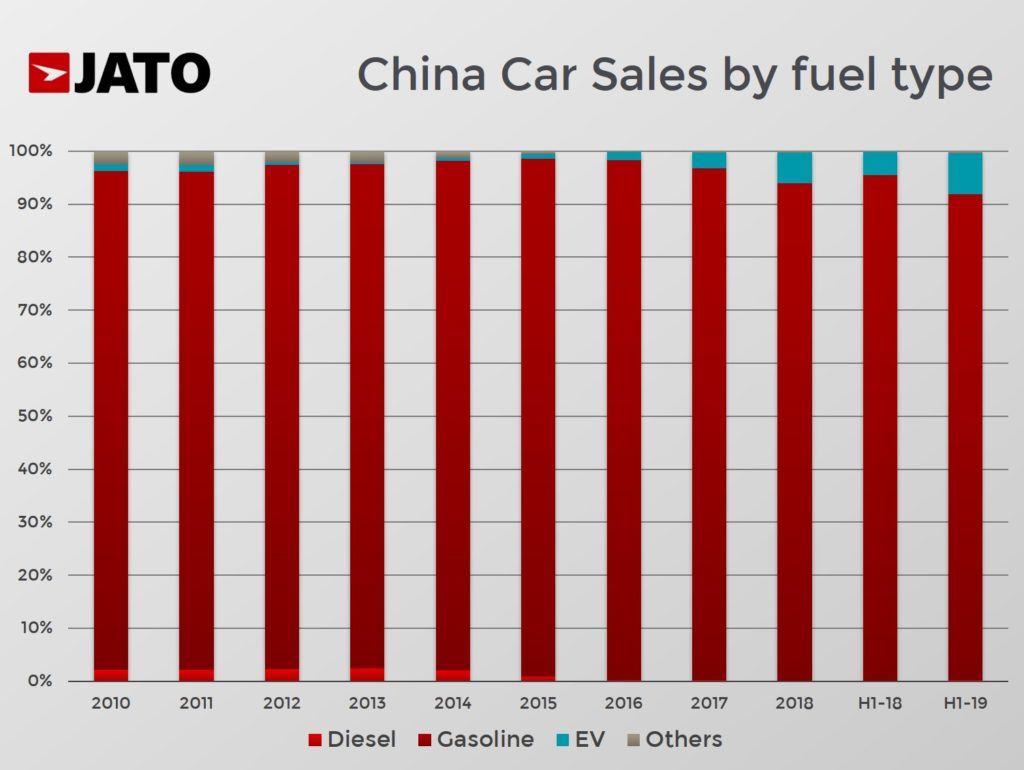 First, China has traditionally avoided diesel as an alternative to gasoline (see chart with the reasons). The second reason is due to the SUV boom (SUVs now count for 44% of passenger vehicle sales) based expansion plan on gasoline, recently on pure electric engines. 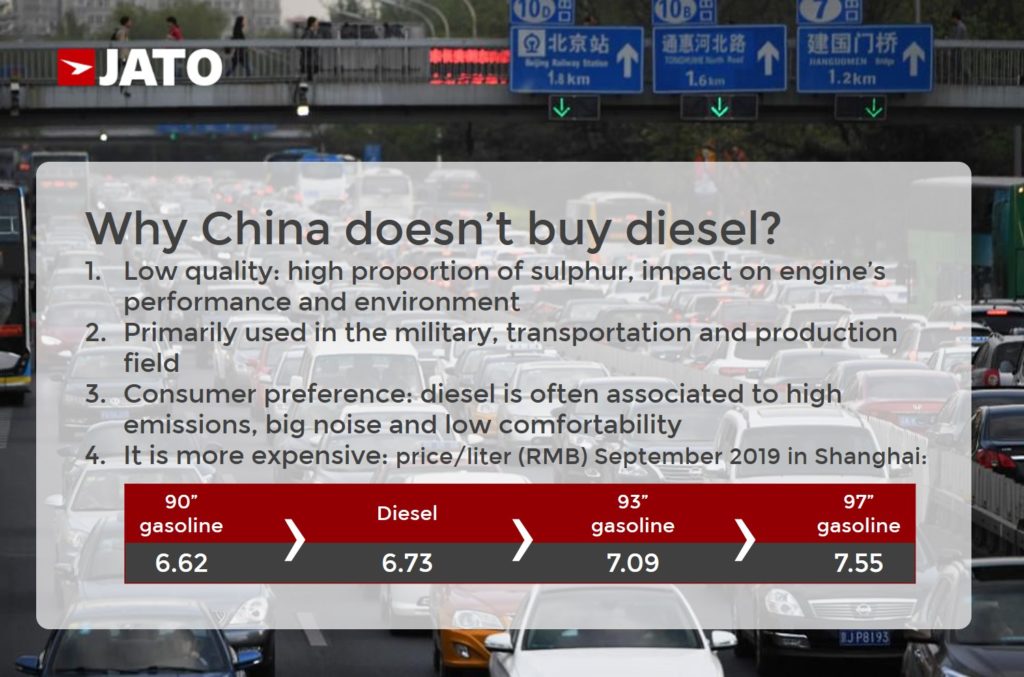 In the USA there’s a long lasting gasoline addiction that fuels their big trucks and SUVs. Any attempt to introduce diesel engines has resulted in little interest from consumers. Even before the 2009 financial crash, the diesel market share peaked at just 3.1% in 2007 and was never able to become a main player. This is also due to the popularity of Toyota and the rise of hybrid, which have become the best alternative to gasoline.

The data collected by JATO** also revealed that pickups continue to buck the negative market trend in 2019. They were the only segment to show a volume increase during H1. In the case of SUVs, the global driver of growth for the last 6 years, the complex dynamics of the world economy and geopolitics are affecting their commercial performance. 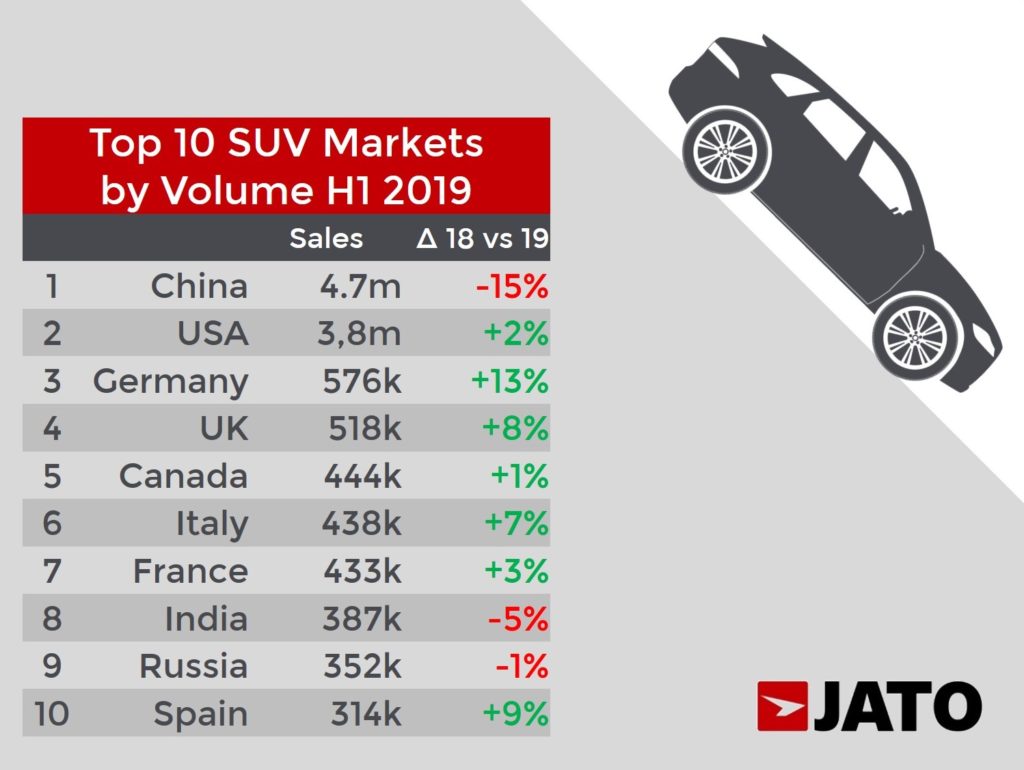 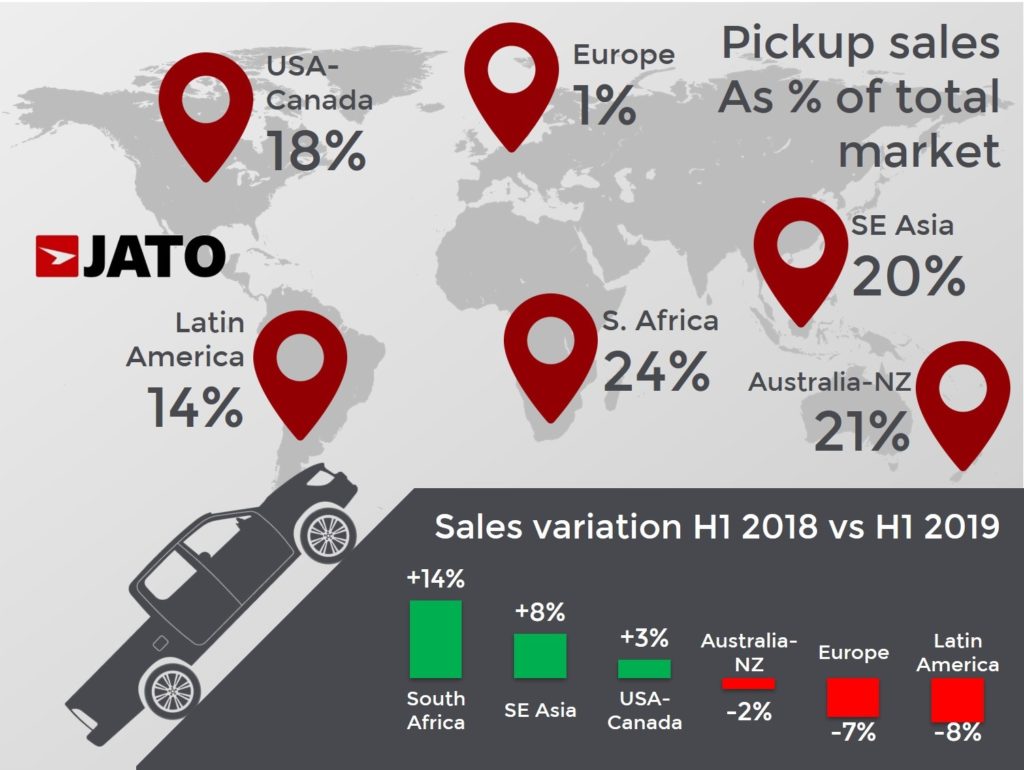 The new Toyota Corolla is finally a global model, as Europe’s stopped selling a dedicated version (the Auris) and now receives the same model as the rest of the world. This change, along with the split between different versions of big trucks in the USA, put the Japanese compact in the lead. 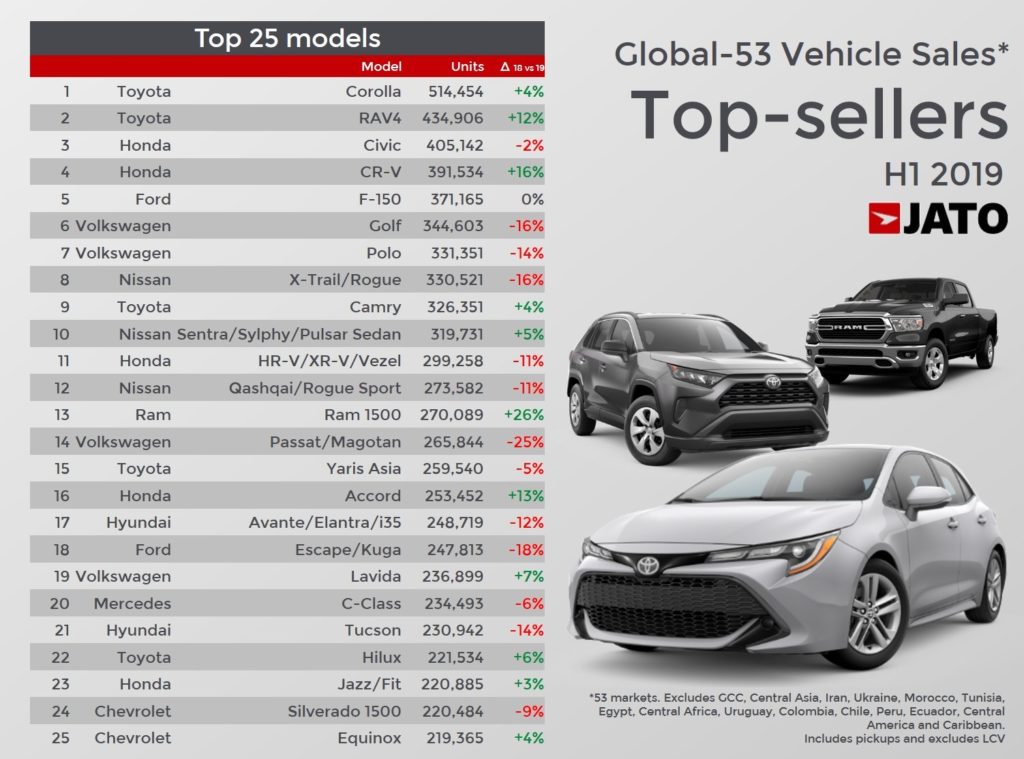 The Corolla’s sibling, the RAV4, also performed well during the half. The new generation’s paying off and the model’s become the world’s second top-selling passenger car and the world’s most popular SUV. It posted double-digit growth in China, Canada, Japan, Europe, Taiwan and Mexico. The third and fourth places were occupied by direct rivals of the Corolla and RAV4 – the Honda Civic and Honda CR-V, respectively. The top 5 was rounded off by the Ford F-150, meaning four Japanese models came within the top 5.

Ram 1500 and Toyota C-HR among the top winners

Besides the strong growth posted by the Honda CR-V (+21%), other models also saw big increases during H1 2019. The new Ram 1500 increased its volume by 26% to 270,100 units, outselling the Chevrolet Silverado 1500, and helping FCA to offset the big declines of many of its models. 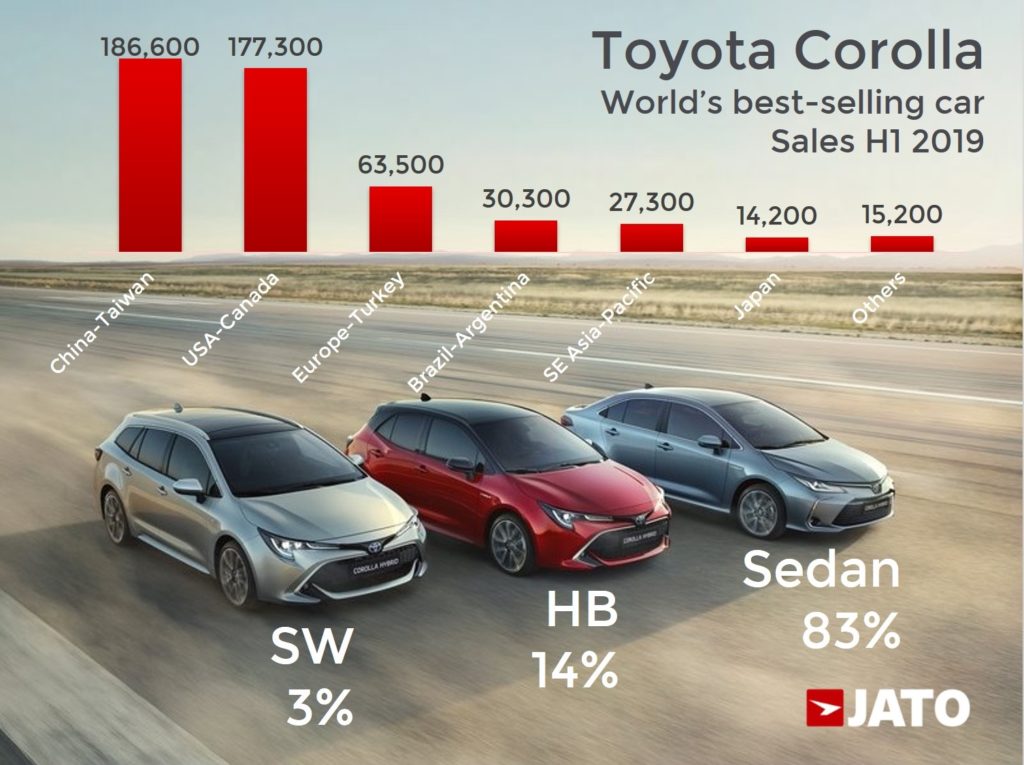 It was also a good first half for the Hyundai Kona (aka Encino in China and Kauai in Portugal), which was up by 59% to 140,700 units as it became the fifth best-selling Hyundai model. Tesla has climbed the rankings thanks to the Model 3 – the world’s top-selling electric vehicle. Nissan sold 59% more Kicks thanks to its outstanding start in the USA (29,300 units).

The losers include both new and aged models

Aging products like the Volkswagen Golf (-16%), Nissan X-Trail/Rogue (-16%), Volkswagen Passat/Magotan (-25%) and Ford Escape/Kuga (-18%) also lost out. Further down the ranking the Subaru Impreza/WRX/XV was down by 23% to 163,500 units and the Mazda3/Axela, whose new generation hasn’t improved performance, fell by 22% to 153,000 units. The Jeep Cherokee, Hyundai i10, Ford Explorer, Ford Edge, Baojun 510, Peugeot 308, Chevrolet Cruze and Buick Envision also posted big declines.

** 54 markets, that count for around 92% of total global (passenger cars and LCV)