During the first six months of the year, global sales of pure electric vehicles increased by 92% to 765,000 units. This total is the volume sold in 41 markets around the world, so the bigger picture (all markets) would equal around 780,000 vehicles. This is a substantial increase considering the challenging situation facing the vehicle industry worldwide. 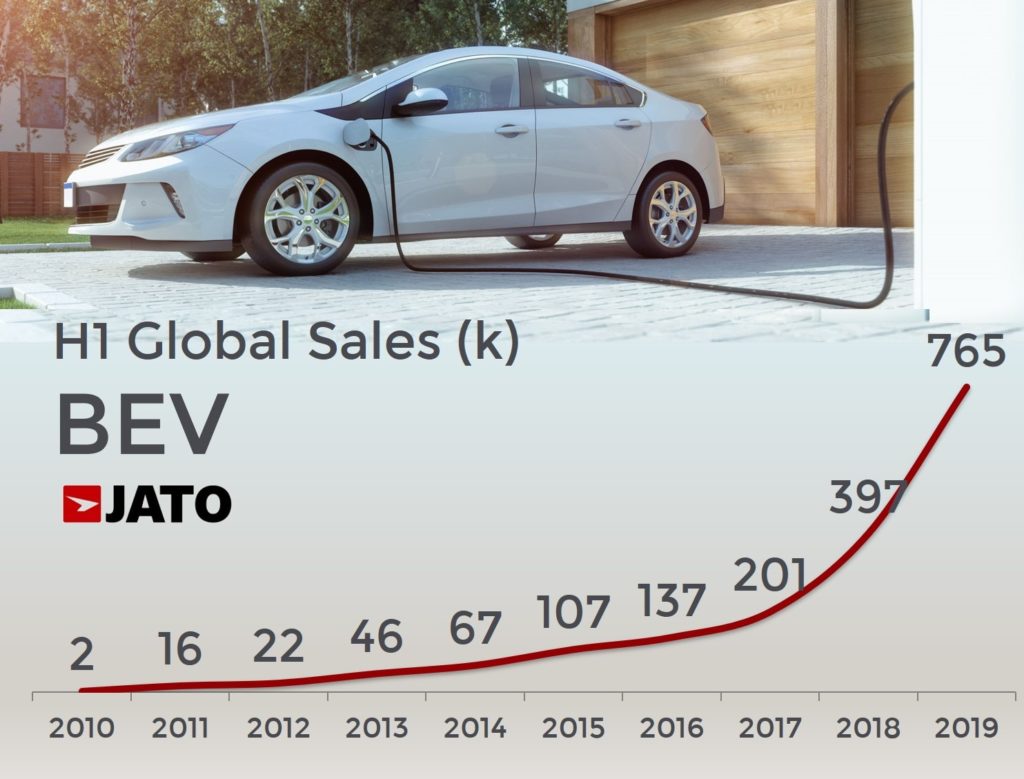 However, BEVs continue to face the same issues as the wider market: they’re quite expensive (even in China), the infrastructure’s not ready yet, and there are still concerns about battery ranges. This explains why they’re still a niche segment worldwide. Despite incentives in many markets (see USA), their global market share totaled 1.7%. Fewer than 2 in 100 vehicles sold globally were powered by a fully electric engine.

The strong growth registered in H1 2019 is due to two main factors: China’s commitment to electrification, and Tesla’s soaring sales thanks to the Model 3. Of course, the wider range now on offer has provided more options for consumers, who are also making the most of the incentives and benefits of driving a zero-emission car. 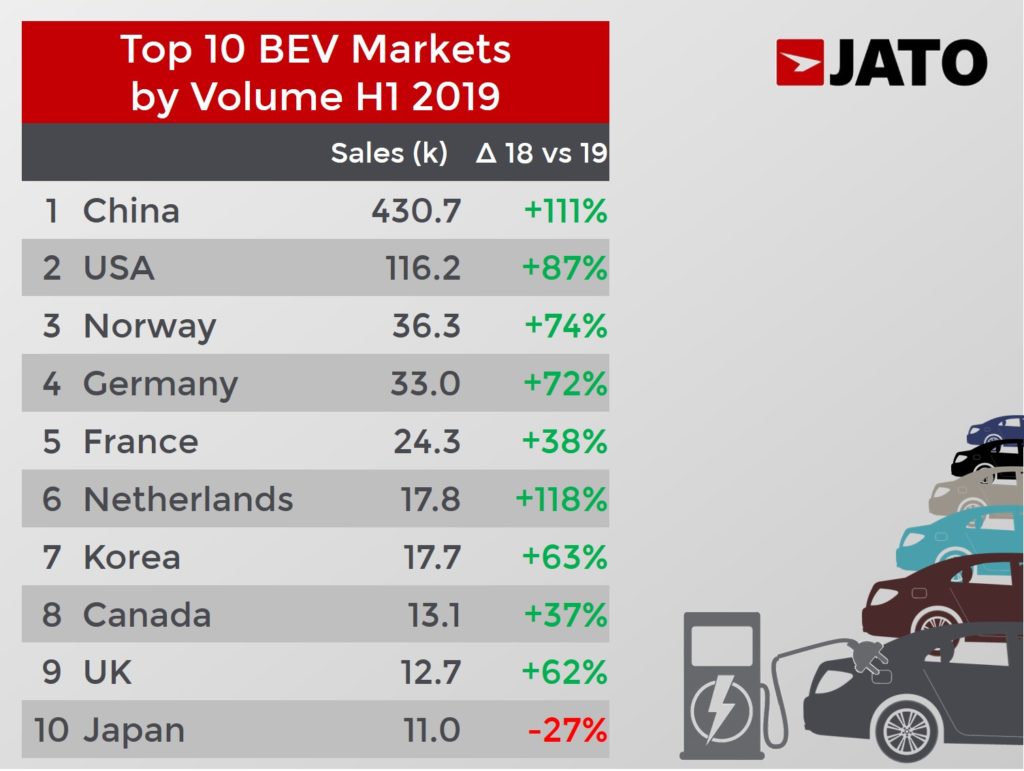 The immediate effect of this policy is evident in market share. BEVs accounted for 1.9% of total vehicle sales in China during H1 2018. One year later their market share jumped to 4.0%. It’s interesting that only Chinese companies made use of the boom. They accounted for more than 90% of Chinese BEV sales, leaving little market share for foreign brands.

The Tesla Model 3, a driver of growth

The Tesla Model 3 is a good example of an electric car that’s popular despite its price. Tesla sold around 134,300 units in H1 2019 and was by far the world’s top selling electric vehicle. Besides the good results in the US, where it sold 57% of total volume, the premium midsize sedan is also doing very well in Europe and China. 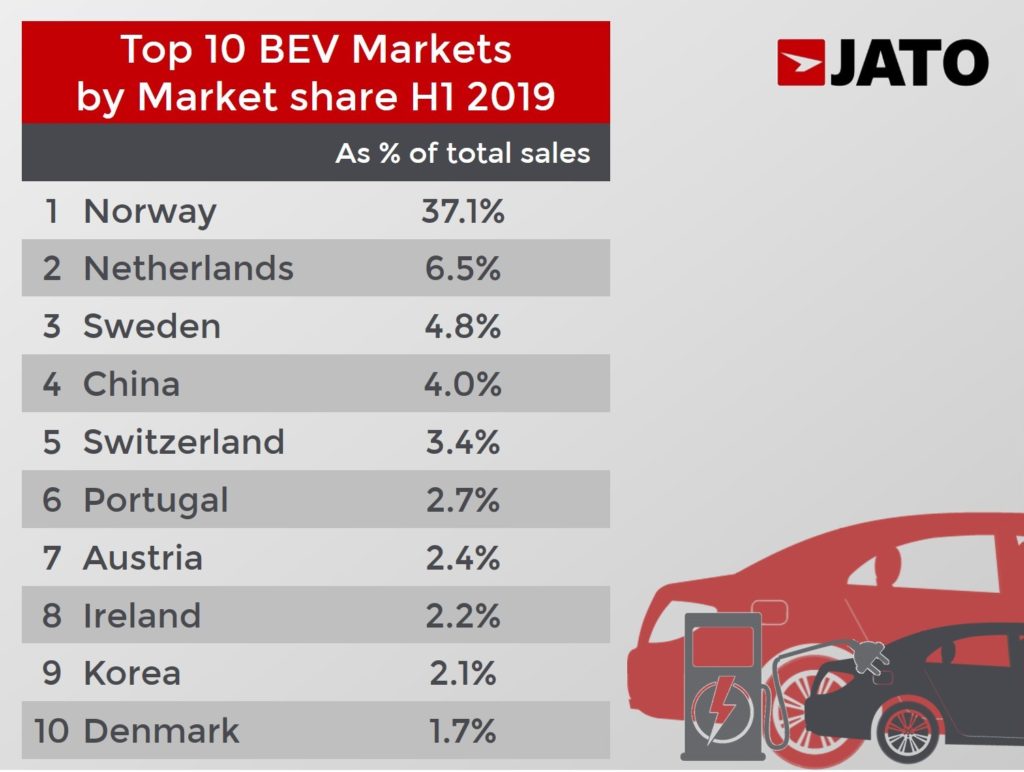 European registrations totaled 37,500 units, and the Model 3 led the BEV ranking ahead of the Renault Zoe. The Model 3 was Norway’s top-selling car, and the third best-seller in the Netherlands. In China, our data shows that 16,300 units were sold, making the country its second largest market, and entering the Chinese top 10 BEV ranking. 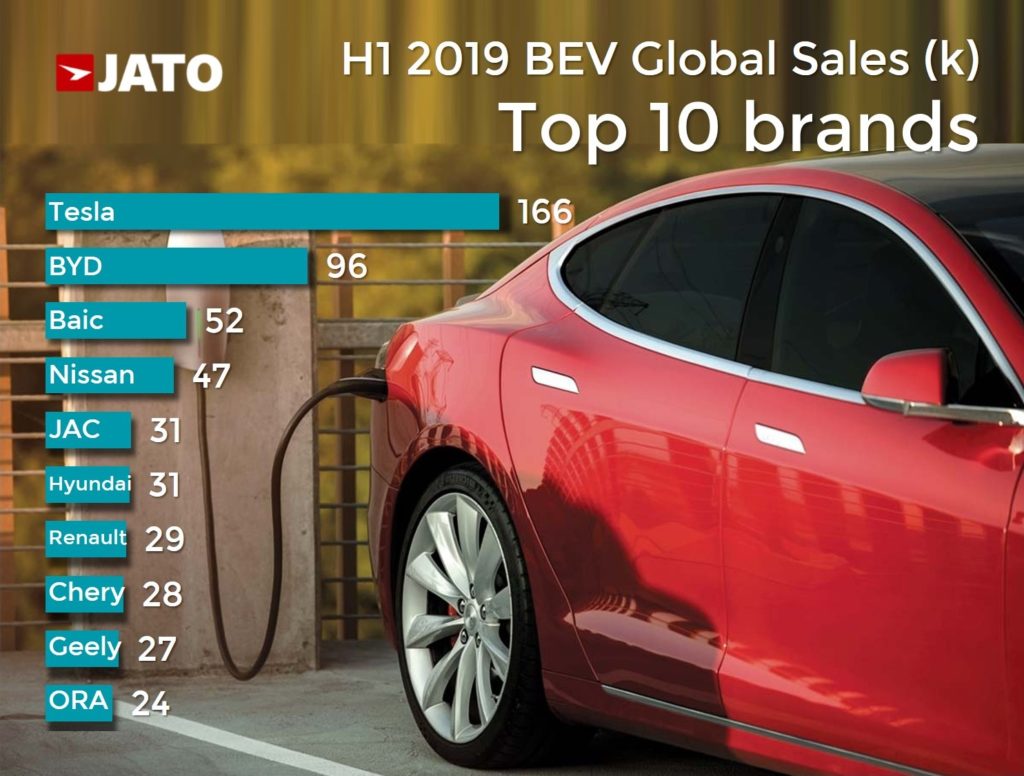 The commercial performance of this model is crucial for the brand’s financial health. Tesla continued to lose money in Q2-19, so it needs to sell many more Model 3s, and this is expected to be in overseas markets, as US demand is close to peaking.

Consumers in Europe have also shown an increasing interest in these vehicles. BEV registrations totaled 173,200 units in H1 2019, 84% higher than the volume seen in H1 2018. This growth is partly explained by the demonization of diesel engines but is also due to the introduction of cheaper new models. 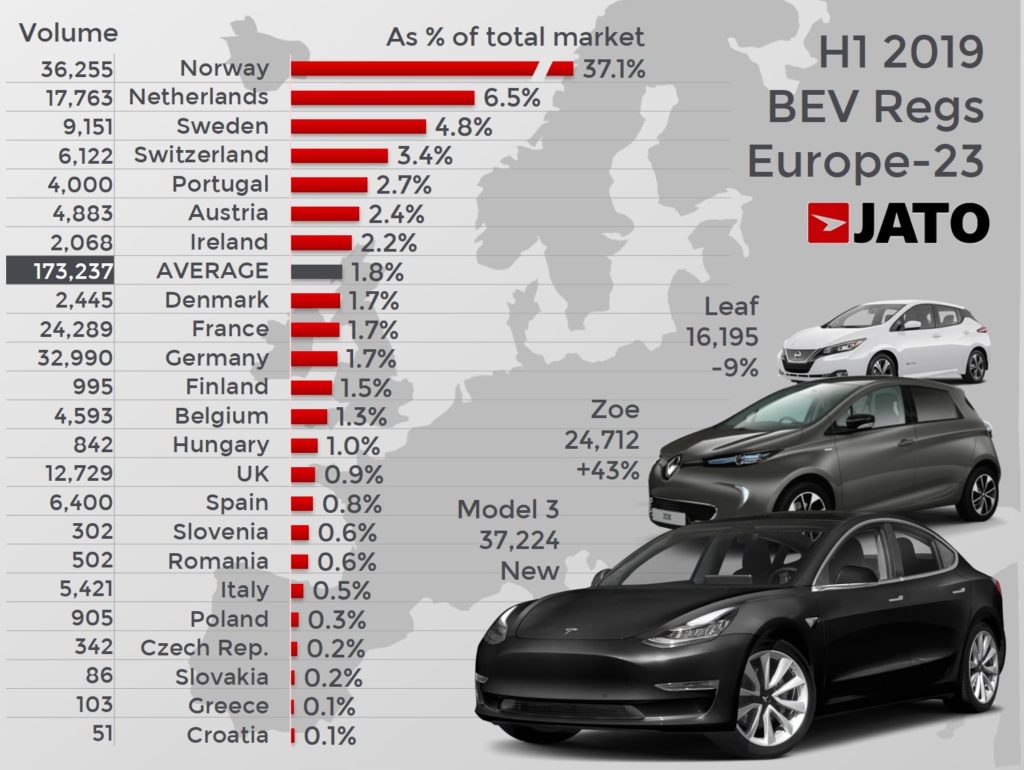 The Tesla Model 3 wasn’t the only vehicle boosting sales. Even excluding the American sedan, registrations would still have grown by 45%. The Renault Zoe, BMW i3 and Volkwagen e-Golf all recorded substantial growth. But a big portion of growth was driven by the arrival of the Hyundai Kona, Audi E-Tron, Jaguar I-Pace and Kia Niro – all SUVs.

The dynamism seen so far is expected to continue or even accelerate in the second half. Volkswagen is preparing to introduce the ID 3, its first standalone BEV. The Mercedes EQC will be available soon; Fiat announced the 500 BEV; Peugeot will introduce the electric version of the all-new Peugeot 208; and China is rapidly releasing more models.

The good mood should continue despite the negative sales results in many markets. This is because we’re still talking of a market on the rise, and as such, monthly increases are usually substantial. Nevertheless, if growth doesn’t accelerate considerably then BEVs will remain a minor player in the industry.