The political and trade agreements signed by the European Union and Japan in July is no different than that of the Free Trade Agreement between the two economic blocs. While both parties analyse and fine-tune the text, the car industry prepares for a new dawn, which could be challenging and threatening.

Japan is the world’s third largest car market as a country, but it is the fifth largest as a region –  behind China, Europe, the USA and Latin America. It is a key player in terms of production, exports and new technologies, thanks to the strong global position of the majority of its car manufacturers. But in contrast to this, Japan’s market is one of the most protected when it comes to imports.

The European Union is more of an open market, because many brands sell their cars there. It is, however, complex in terms of safety and environmental regulations. With the recent CO2 reduction targets, Europe is becoming one of the most challenging car markets in the world, not only for the imported products, but for local companies as well. 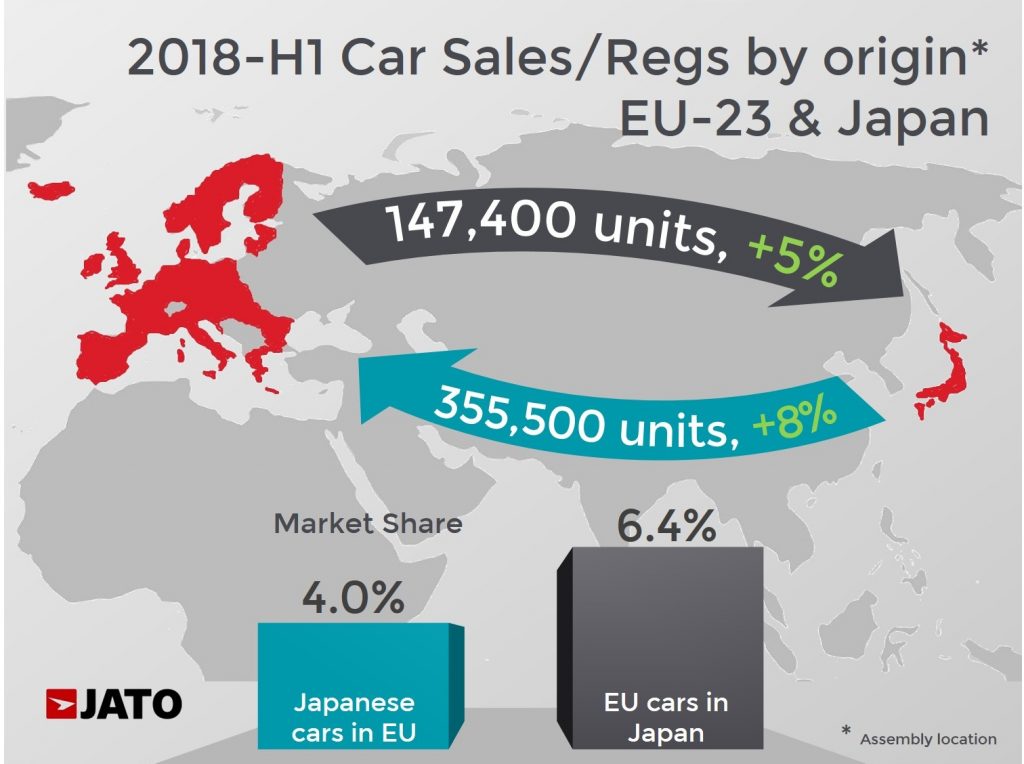 As global trade faces uncertainty following the announcements of the Trump administration, and the respective responses from other nations, Europe and Japan are looking for other partners. The agreement between them would phase out vehicle tariffs over seven years and would include an auto annex designed to ensure continued regulatory convergence in the future. The sensitive topic of the kei-cars taxation is another important issue and is expected to be readdressed by Japan.

In order to analyse the effects of this agreement, I have decided to examine the current situation between the EU and Japan – particularly questioning what is likely to change and who is set to become the big winner of this new scenario. 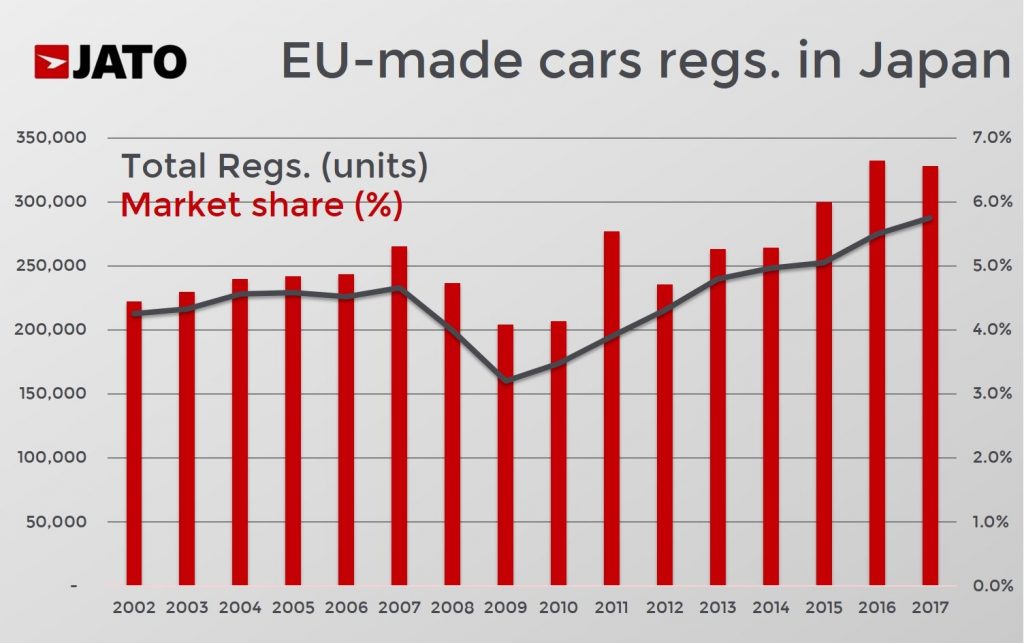 Both Japan and the EU are the largest car importers in each other’s territories. This is a good starting point as it means they are in relatively similar positions. However, European-made cars hold a larger place in the Japanese market. This is mostly explained by the fact that most of the European units sold in Japan are premium cars, which are the world’s leaders. The same happens with imported premium European cars in the US, where they outsell local premium brands. 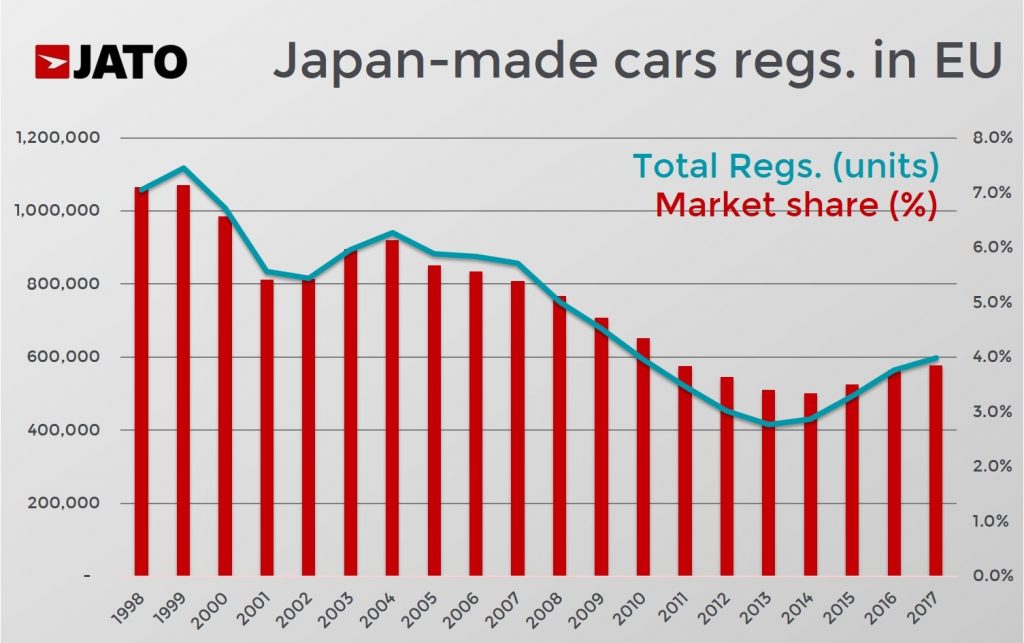 In contrast, Japan sells mostly mainstream cars in Europe, with two in three cars imported corresponding to small or midsize Japanese makers. This exchange is still positive because the trade is based on products that are not direct rivals. Nevertheless, their position in each market is considerably different. While most of the European-made cars compete in a relatively easy segment (premium) where Lexus is the only real competitor, the Japanese-made cars in Europe have to deal with a more complex mainstream segment, in which the local brands have a strong position.

A gradual tariff reduction for imported Japanese cars would mostly benefit the brands that currently depend on their imports. This includes Mazda, Mitsubishi and Suzuki, as well as Subaru and Lexus. Toyota, Honda and Nissan would be less impacted, as they already have an important operation in Europe. In H1 2018, 64% of Toyota’s registrations in Europe corresponded to cars produced in the EU (the agreement also includes auto parts). 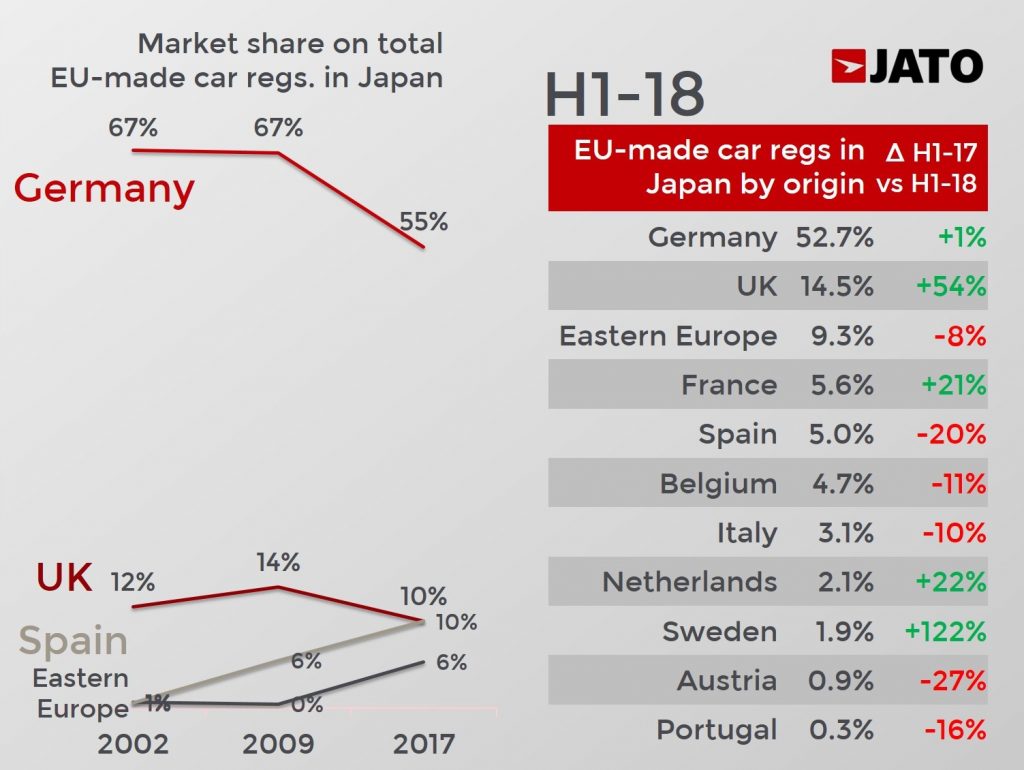 The FTA is likely to be positive for the European players because even if the midsize makers mentioned are able to start importing their cars easily, they do not represent a big threat to the dominant position of brands like Volkswagen, Renault or Peugeot. Toyota, Honda and Nissan would be more exposed as they are direct competitors, especially now that a lot of Japanese makers are launching hybrid versions of their cars. 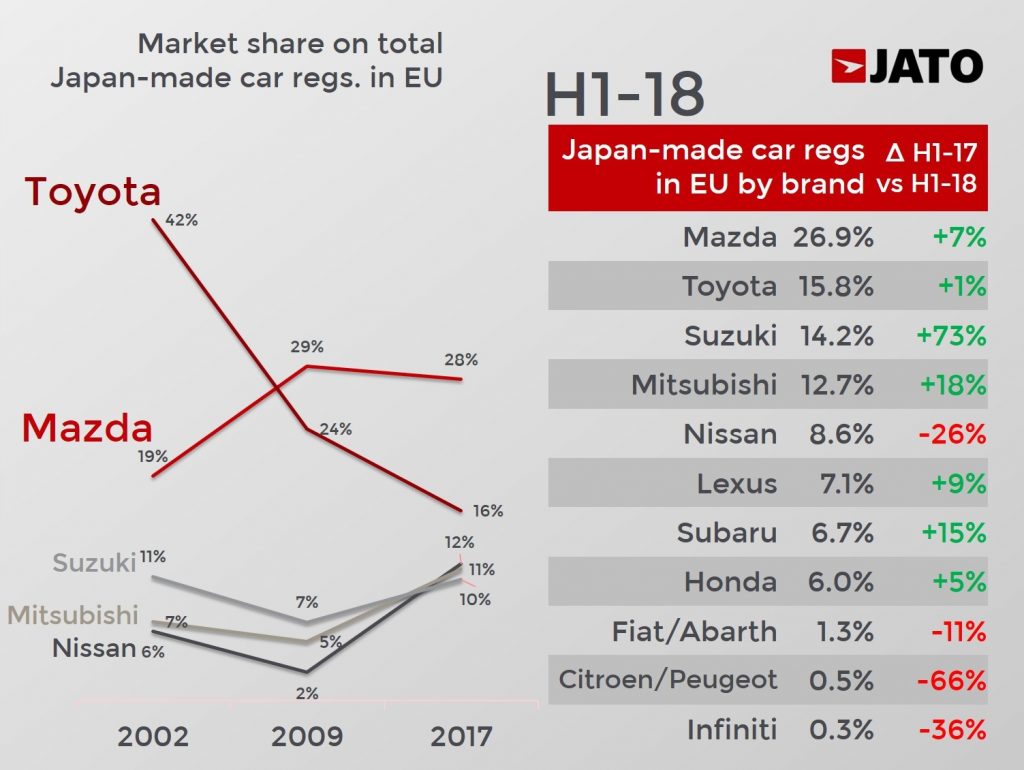 On the other hand, the German premium brands would also benefit, as almost all of their cars are imported from the EU. Even if Japan abolished import tariffs on finished motor vehicles in 1978, it would still not be easy for Western makers to gain a decent piece of the market. The main reason is the complex regulatory barriers to the Japanese car market. If these barriers are removed, we will likely see more Mercedes, Audis and BMWs on Japanese roads. Nevertheless, there wouldn’t be a huge change as most of the demand in Japan favours city-cars and MPVs (62% of total sales), which are two segments that are not a priority for the European production.

In fact, the city-car issue is perhaps the most relevant section of the agreement. Kei-cars count for almost 35% of the total Japanese passenger car market, and a big reason for their popularity can be explained by tax and insurance incentives, as their annual road tax is about a third of the cost of a normal hatchback. Three basic specifications must be met: they can’t be longer than 3,490mm, wider than 1,490mm and the engine can’t be bigger than 660cc/64hp. Currently there are no cars made in Europe that feature those specifications. 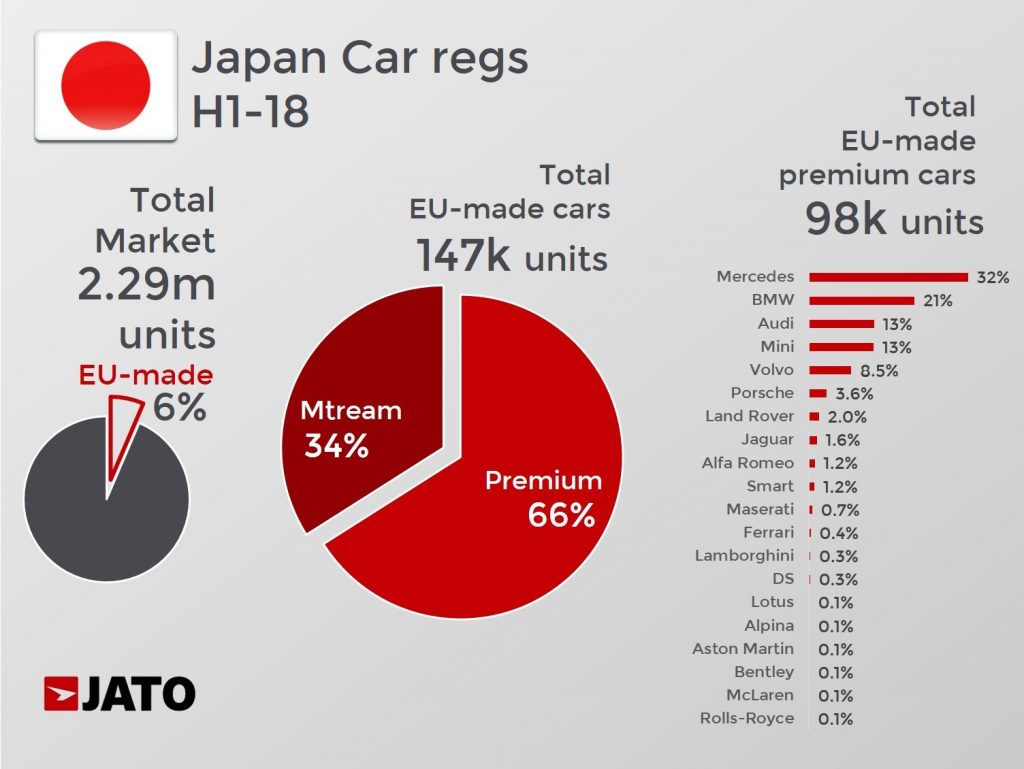 Excluding the Citroen C-Zero and Peugeot Ion, the European cousins of the Mitsubishi I-Miev which are produced in Japan, there are only four models that meet the length requirement. These models are the Smart Fortwo (made in France), Citroen C1, Peugeot 108 and Toyota Aygo (made in Czech Republic). But none meet the width requirement. Considering this limitation, the Europeans are looking for equal tax breaks and regulatory advantages for their city-cars. 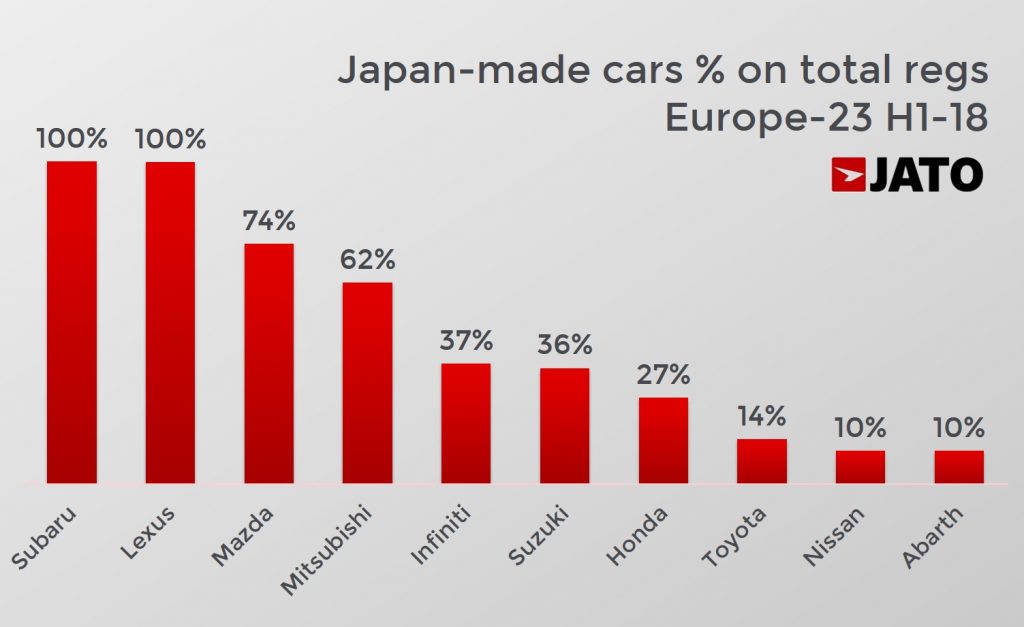 If the Japanese agree, Japan could become a lifesaver for the European-made city-cars. These vehicles have lost a lot of ground on the roads of Europe, as their market share has sunk from 12.2% in 2009 to 7.5% during the first 8 months of 2018. In contrast, thanks to special treatment, Japan is the world’s largest city-car market. Due to this, the next generations of the Smart Fortwo/Forfour, Fiat 500, Volkswagen Up, Peugeot 108 and Renault Twingo could be given more life and a more promising future. 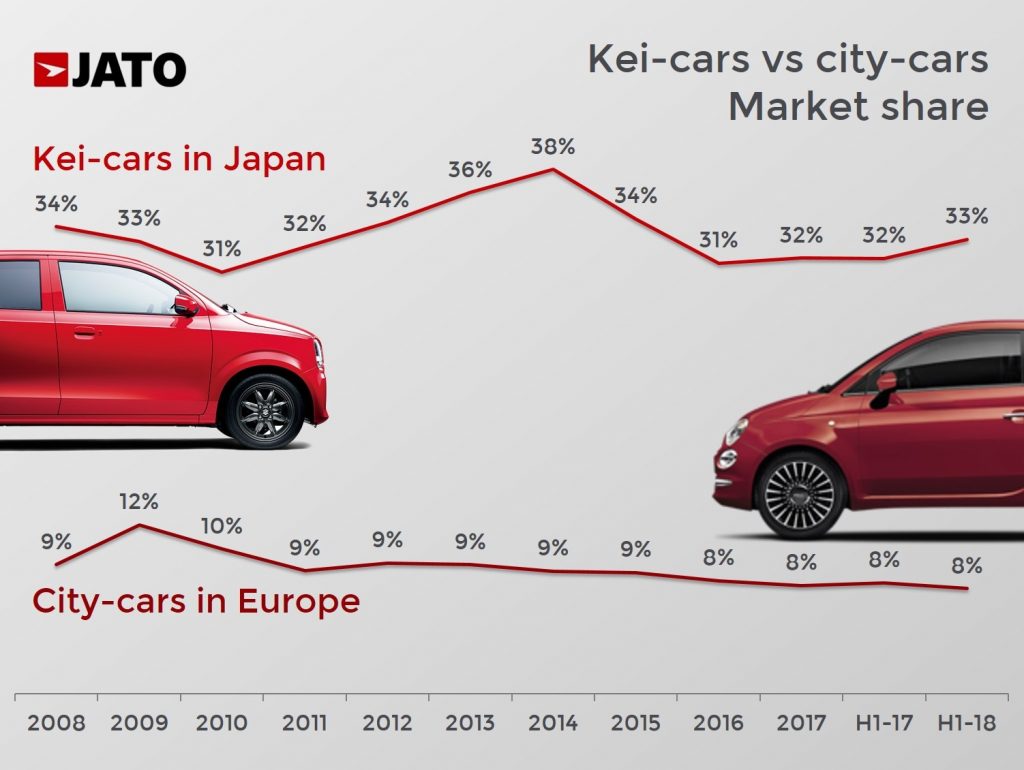 As with all trade deals, there will be winners and losers, threats and opportunities. Based on the current situation and the potential outcome of the agreement, it seems that the top winners will be the midsize and small Japanese makers that don’t have a big presence in Europe. European premium cars are also likely to gain traction in Japan, while their mainstream peers could benefit from access to the world’s largest city-car market, depending on what the parties agree. The biggest threats could happen in the European Compact SUV segment, where more hybrid Japanese-made rivals could appear, and to Lexus in Japan, which may have to deal with more imports from its European rivals.