More than 66,000 hybrid & electric passenger cars were sold in India in 2016, but just 100 of these were battery electric vehicles (BEVs) according to the figures provided by JATO-LMC Automotive.

International comparisons position India well below other global markets in this regard: 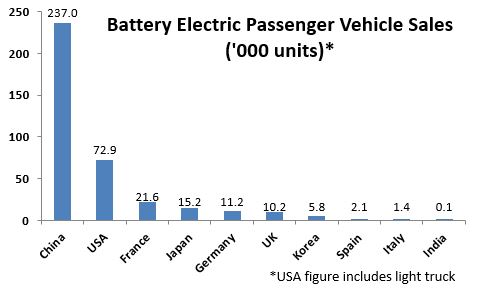 Mahindra remains the country’s only local manufacturer of battery electric cars. The Indian Government’s major changes to the GST tax scheme have provided favourable conditions for electric cars to grow, but there are many obstacles in the way of their widespread adoption.

Despite the small market for BEVs in India at present, the Indian Government has announced comprehensive plans to make sales of all new passenger cars fully electric by 2030.

The target the Indian Government has set for the electrification of cars is by far the most ambitious one made by a major car market so far. As a result, the plan has received much attention, which stems from a report that was jointly published by NITI Aayog and the US-based Rocky Mountain Institute earlier in 2017, which proposed a roadmap for achieving the electrification target. It is not yet clear though how many of the proposals outlined in the report will be committed to by the Government, or whether an outright ban on internal combustion engines will eventually be put in place by the Government.

The new target set by the Indian Government has been done with a view to reducing the country’s reliance on ballooning oil imports, where it is operating at a deficit, and to reduce its chronic air pollution, particularly in cities like Delhi, where air quality regularly reaches appalling levels. In addition to this, achieving the target would also improve India’s automotive R&D capabilities, establishing it as a leader in innovation.

In the view of JATO and LMC Automotive, there are many significant obstacles to transforming the passenger car market in India. Crucially, though, there is the issue of much needed fast recharging infrastructure, as drivers will only choose non-plug-in BEVs if there is no convenient place for them to quickly recharge their vehicle. At present, there are just over 200 public charging stations across the whole of India though, so a colossal investment is required to get this number on par with the number of conventional fuel stations available in the country. LMC Automotive and JATO don’t see any reassuring signs that this is being undertaken so far though and shared mobility services and the private sector can only do so much to alleviate this – the government needs to take the lead.

Electric driving range, model choice and cost also remain barriers, as they do in other markets for BEVs. These can be addressed by significant investment in Indian R&D and the expansion of local manufacturing. Parts and materials need to be sourced locally if they are to mitigate costs in a sector that already has small profit margins. Internal combustion engine production plants need to be replaced with those manufacturing electric powertrains, and production capacity in general needs to be expanded to achieve output in the order of 10 million battery electric cars per year by 2030. Technological know-how can be acquired through international joint ventures, and Indian companies have already taken steps towards this. A significant breakthrough in BEV driving range and battery costs is expected by the middle part of the next decade, but the necessary partnerships need to be in place.

The view of LMC Automotive and JATO is that India’s 2030 target for passenger cars is unlikely to be fully achieved because of these barriers. However, India is well placed for the success of shared mobility services and we believe that electric cars can greatly succeed in the commercial fleet market. The other silver lining is that even small steps towards this vision will at least prompt manufacturers to move towards an electric future, and galvanise a nation to start thinking about electric cars, clean air, and technological innovation.

Ravi Bhatia, President, India, for JATO, said: “By unveiling this policy, the Government has set a clear direction for the automotive industry in India. The policy addresses the strategic objectives of reducing oil imports and increasing power capacity utilisation, whilst also helping to reduce the chronic pollution seen in high density areas across the country. However, the Indian automotive industry is the sixth biggest in the world and it will be some time before the affects of the changes are felt, as OEMs redraw their vehicle line-ups and powertrain strategies, whilst they also try and keep up to speed with the tsunami of technology advancement in the personal transportation arena. We at JATO and LMC Automotive are here to help. By leveraging our combined global presence and automotive partnerships, we’ll support OEMs in conceptualising, defining and categorising the solutions they need to ensure that this new direction for the automotive industry in India is a success.”